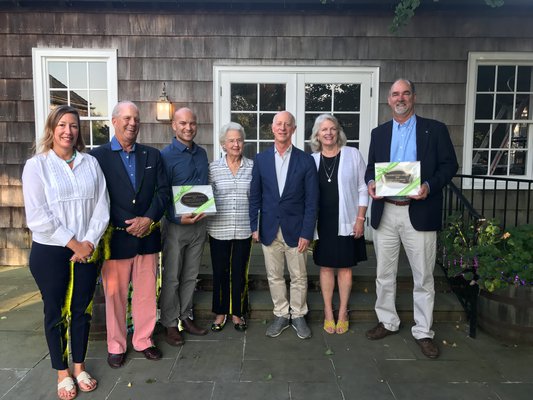 The Village Preservation Society of East Hampton presented four awards for excellence in historic preservation or restoration during its annual meeting on September 28, recognizing work on both private residences and public buildings.

For their restoration of the Hiram Sanford House on Egypt Lane, Dominic Ramos-Ruiz and Eric Ellenbogen were presented with the VPS Historic Restoration Award. According to VPS, the house has a foundation stone labeled 1822, but elements of the construction and design were dated to the 1700s.

In the public category, the decommissioned Amagansett U.S. Life-Saving and Coast Guard Station and the John Lyon Gardiner Mill Cottage on the East Hampton Village green were honored. The Gardiner cottage, which East Hampton Town purchased with the Community Preservation Fund in 2007, underwent a historic restoration overseen by the East Hampton Village Board. It now houses an art gallery current showing the collection of Percy Moran, a nephew of Thomas Moran, who lived there from 1902 to 1916. The former live-saving station is now a museum that, as of 2018, is on the National Register of Historic Places.

“Because of the integral role our historic homes and buildings play in our sense of place, and with the rapid destruction of so many old buildings due to development pressure, the Village Preservation Society of East Hampton created an award to encourage and honor private and public historic restoration and renovation projects,” said Georgia de Havenon, a society trustee and Historic Preservation Committee chairwoman, in a statement.

The annual meeting also included a talk delivered by Pulitzer Prize-winning architectural critic, author and educator Paul Goldberger titled “Why Do We Preserve? Notes on Holding Back the Tide.”

“Paul Goldberger’s talk was edifying,” Village Preservation Society Executive Director Kathleen Cunningham said. “He reminded us of what is important, and that the work of historic preservation takes many forms, and is really never done.”

Pulitzer-winning critic Paul Goldberger, who has penned books and countless columns on the architecture and ... 20 Apr 2021 by Brendan J. O’Reilly

C.L. Fornari, an author, blogger and radio host who focuses on the subject of gardening, ... 19 Apr 2021 by Staff Writer

Westhampton Beach Village Planning Board Chairman David Reilly said the board members would be in ... by Brendan J. O'Reilly