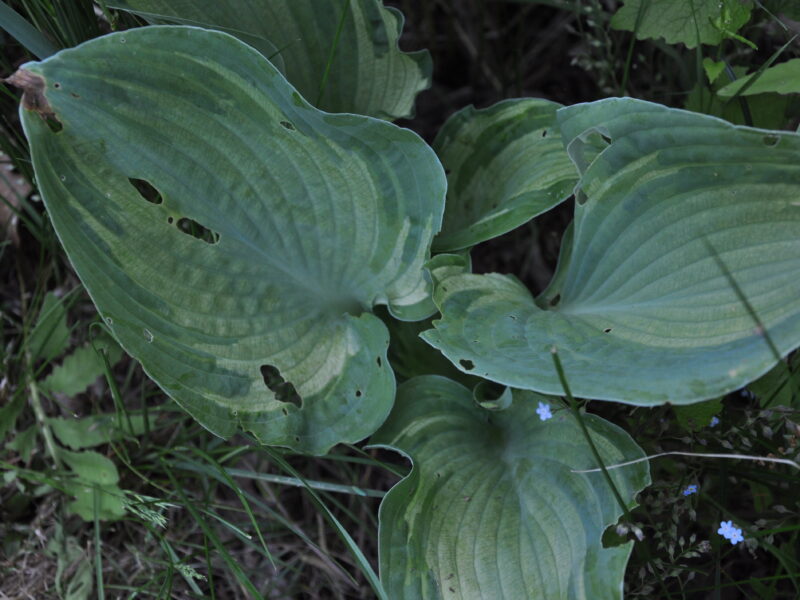 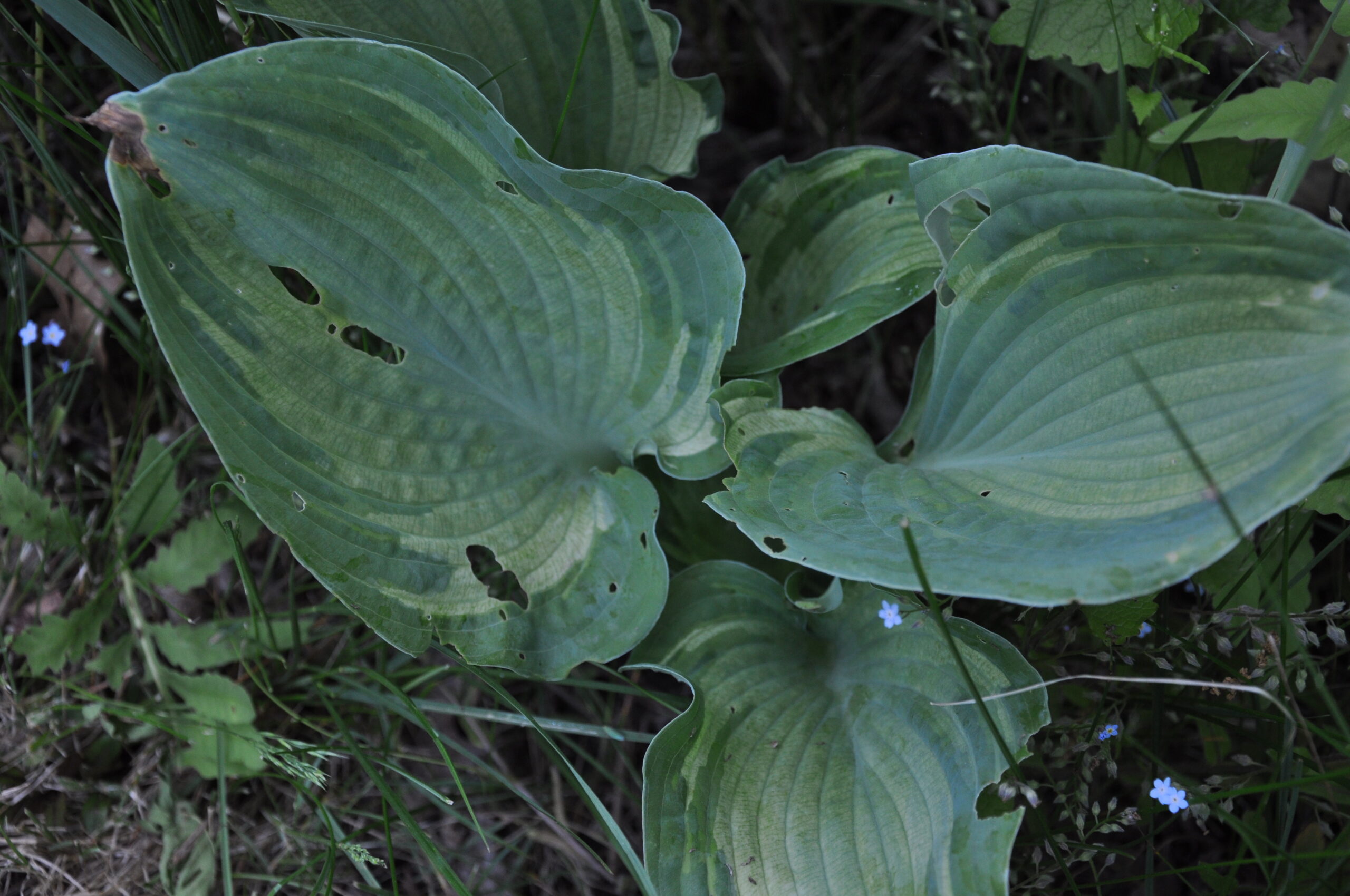 Looks like insect feeding on this Hosta right? Wrong. This is slug damage. Slugs are able to eat leaves from anywhere on the leaf. Only a few beetles can do damage like this, and beetle damage is often seen first on the leaf margin. ANDREW MESSINGER 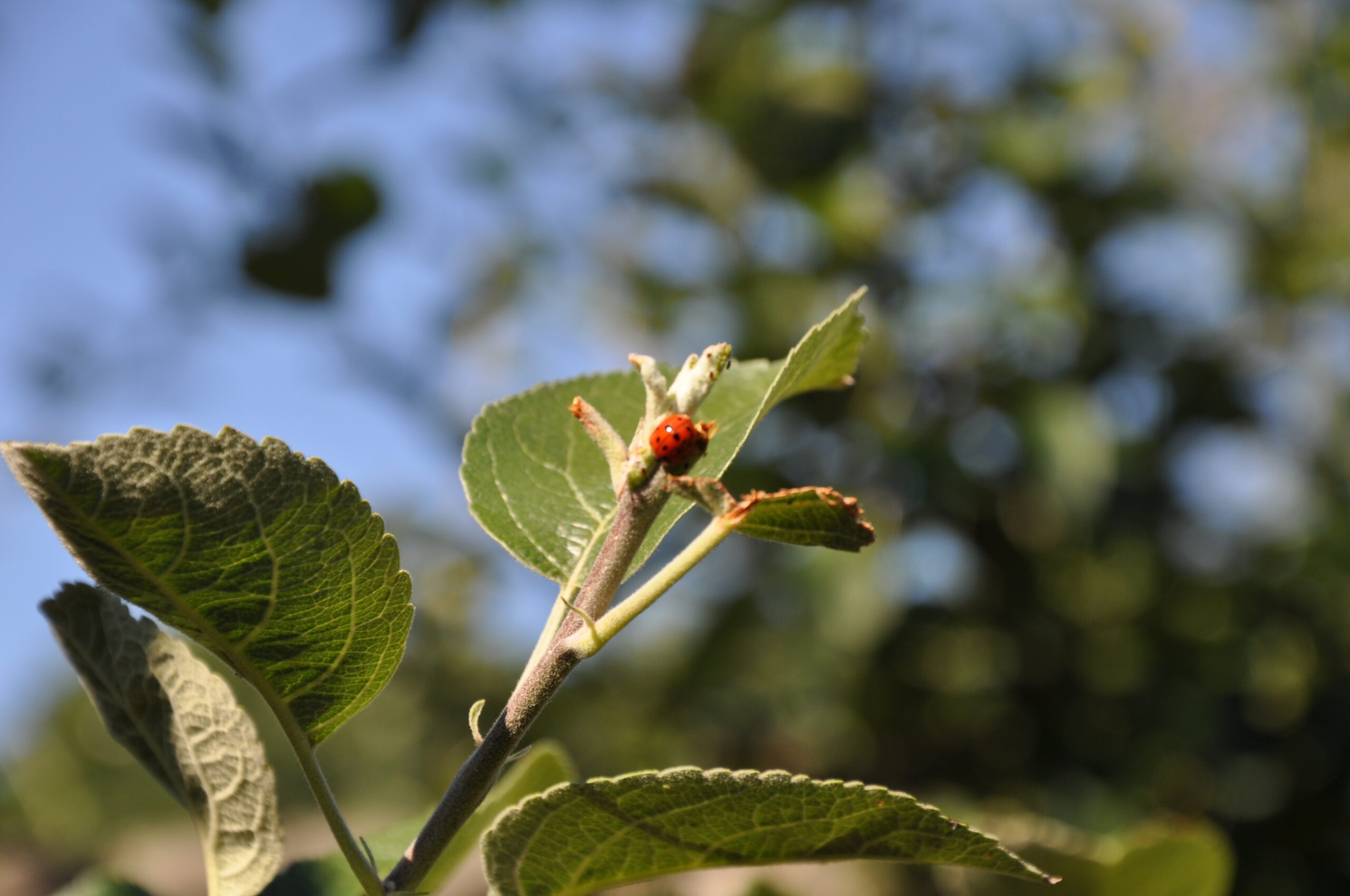 Nature at work. A wild lady beetle has homed in on the tip of an apple tree branch where it’s feeding on aphids. Lady beetles bought in the store rarely hang around long enough to be helpful. ANDREW MESSINGER 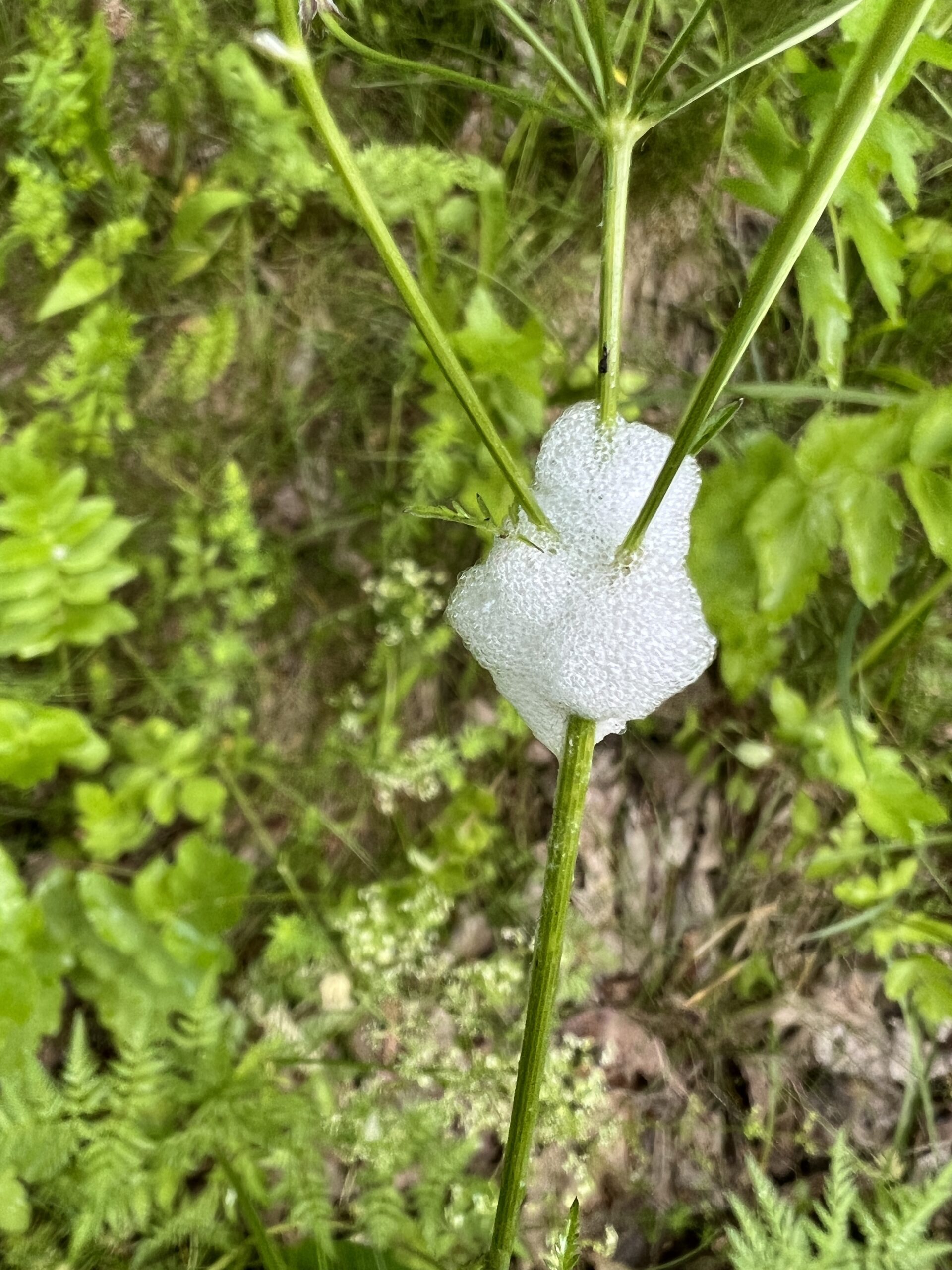 Spittle bugs are showing up now and a wide range of garden plants. The bug itself does little to no damage to the plants, but if you spray the spittle with water a small worm will be revealed that the birds will devour. ANDREW MESSINGER 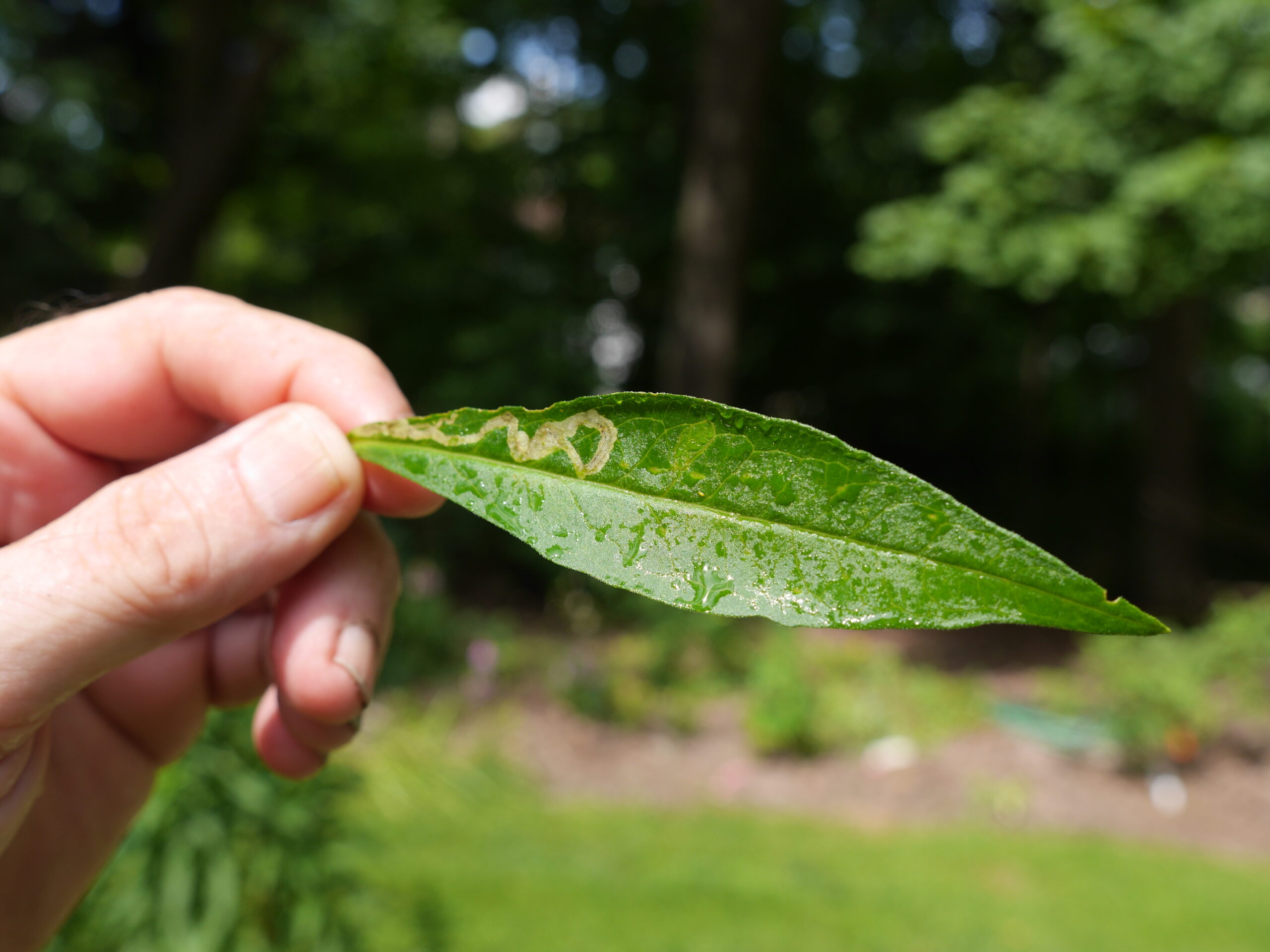 While leaf miners are often found on the leaves of columbines this is a Phlox leaf miner trail. Leaf miners (except on birch trees) are usually a nuisance and not treated though neem oil will deter them. ANDREW MESSINGER 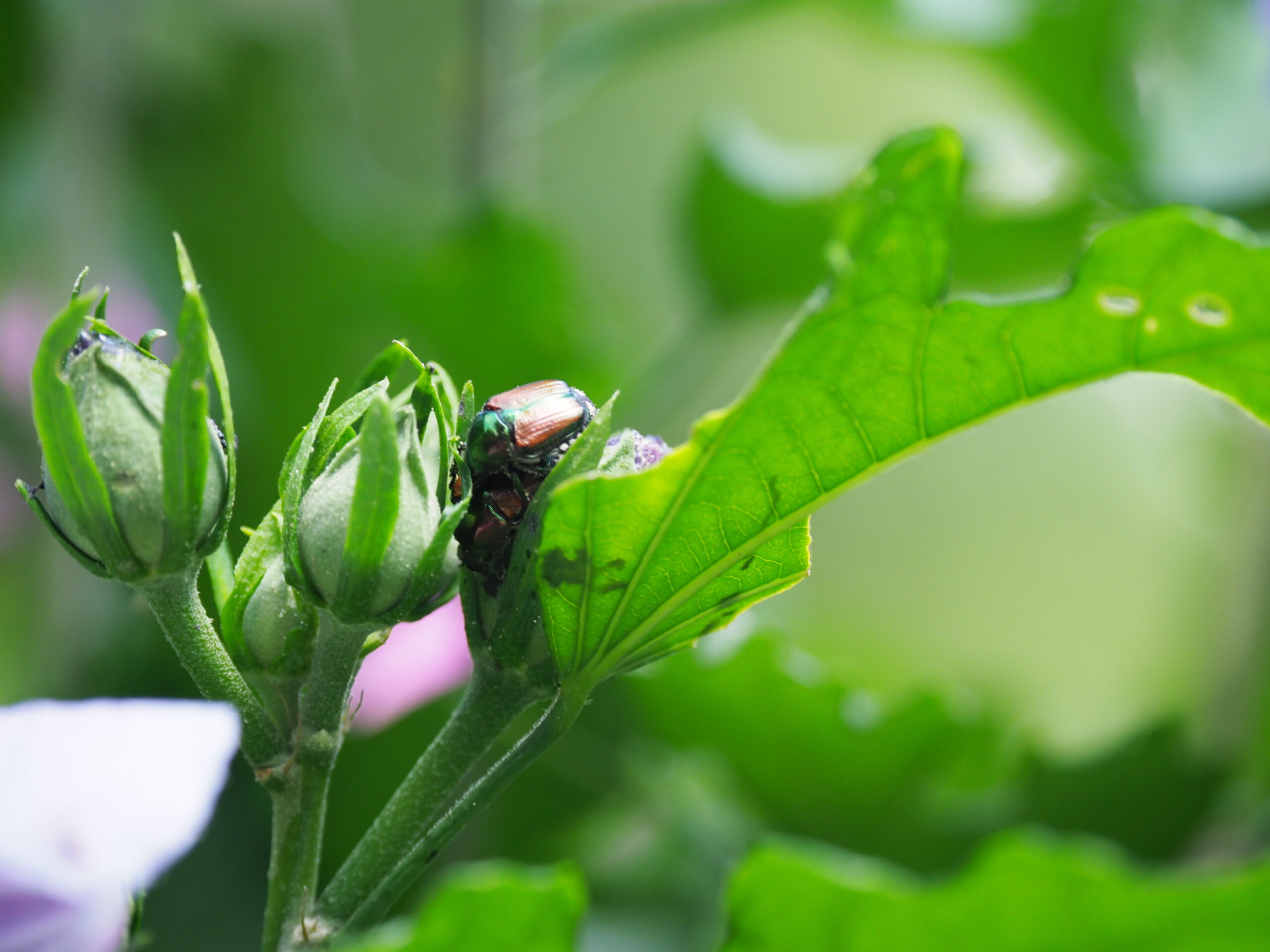 Japanese beetles will feed on a wide range of plants. However, they are one of the few beetles that will feed on flowers as well as on foliage. They are particularly fond of hibiscus (rose of Sharon shown here) and roses. Note the beetle feeding on the flower and the already damage foliage.

Now that we’re officially into the summer season the weather will assuredly get warmer. For gardeners this is a good thing, but for the insects that lurk in our gardens it’s great news.

As the temperature increases so do insect populations, and the more there are, the more problems they present.

These days, though, there is an added issue. As climate change and global warming continue, the changes have enabled insects that have had only one brood or generation a year to increase to two and in some cases even three generations. But one piece of wisdom remains the same: Address your insect issues early in the season and you’ll reduce the problems they create through the entire growing season.

One way to do this is through scouting. This is the process of making regular inspections of your plants so you know when the insects arrive and are able to monitor their progress and effectively stop it. However, you need to know what and who to look for and how to address them.

Years ago we used a simple — or so we thought — technique for insect control. It was effective but it was the atomic bomb effect. Every few days or every few weeks we’d go out into our gardens and spray. We’d use toxic chemicals that certainly killed the insects but also killed birds, fish and other organisms. And in time, many insects developed immunity to these chemicals. As we used more and more, the insects continued to thrive and a “newer chemistry” was introduced. Each new chemical resulted in the same fate: insects immune to the chemicals — and more insects.

This was when integrated pest management and monitoring became the new game. And when used properly by you and your landscapers, they are very effective tools that result in much less environmental harm. If you are truly dedicated to this effort you can learn about GDDs, or grower degree days, which can allow you to pinpoint the days that it’s most effective to manage certain insects so that you only need to treat for them once or twice a season. Cornell Cooperative Extension of Suffolk County has a fact sheet on this method that you can find here: ccesuffolk.org/agriculture/growing-degree-days-gdd.

Here are some tips to help you, and I’ve divided them by vegetable and ornamental garden insects, though there is some overlap. I’ve left out trees and shrubs as these problems are usually addressed by arborists and professional landscaping companies who have the equipment and background in this area. Just make sure they are always certified pesticide applicators even if they are only using organic materials.

For starters we generally deal with insects that either chew or suck. This requires different mouthparts and is also related to how we might treat for these problems. Will you use a contact insecticide that kills the insect when the material gets on the body of the insect or will you use an insecticide that needs to be ingested by the insect while it’s munching on the leaves? There is yet another alternative, neem oil, which is said to have a deterrent effect on some insects like a repellent.

There is an organic treatment, biological treatment or mechanical treatment (row covers for example) that works on just about every one of these insects, but this is a good example of why early detection is critical. If the control method used requires the insect to feed on the treated plant it can take days for the material to work. It’s much easier to gain control and reduce damage when you only have to deal with a few flea beetles or a few caterpillars than a garden full of them.

Sucking insects in the vegetable garden can represent a double whammy. These insects insert tiny needle-like feeding parts (called a proboscis) into the plant tissue and cells where they extract the plant “juices.” In doing this they can distort the foliage and reduce photosynthesis in the leaves and may transmit diseases in their saliva.

For most of these sucking insects the best controls come from organic and chemical contact insecticides. These are absorbed through the insect’s body and can fairly rapidly result in death. A good example is pyrethrin. This is a botanical extract that kills quickly on contact, often working in just over a minute. It has no residual effects. However, and this is critically important, pyrethrin is nonselective and will kill most insects on contact — both the good ones (like honeybees) and the bad ones. There’s great information in this publication from Purdue University including pictures, charts and treatment alternatives: bit.ly/3zOCtuD.

One of the most common sucking insects is the aphid. Aphids can often be dislodged with forceful sprays of water but as very social insects there is never just one and complete control is critical early on. As a colony develops none of the aphids will have wings. But when the population gets high enough the females will develop wings and fly off to start a new colony nearby. If you don’t know what an aphid looks like, there’s a great picture here of a green peach aphid giving birth to a new aphid: bit.ly/3zLmz47.

In our ornamental gardens we still have to deal with sucking and chewing insects, and the more types of plants you grow the more types of insects you may have to deal with. Thankfully, there are many predatory insects that will dine on the ones that do the damage, and you can even find predators that can be purchased commercially and be introduced into your gardens and landscape. No, lady beetles, or ladybugs, are not effective. When you buy a container of these beetles they more often fly away or are in the wrong growth stage to be effective predators.

In the ornamental garden there are probably three insects to watch for, though general monitoring is still important. There are a large number of aphid species that will feed on garden plants and they come in different colors from white to black, orange and green and even root aphids. The most common is probably the green peach aphid. They are most often found on emerging flower buds and will be noticed on rosebuds fairly easily. As you approach you may even see many of them try to move to the opposite side of the bud. These too can carry plant diseases.

The second group of common garden insects would be the beetles, including the rose chafer, the Asiatic beetle and the Japanese beetle as well as weevils like the black vine weevil. These seem to develop in waves, making it a bit more difficult to control them, but there is good news. Dan Gilrein, the entomologist at the Cornell Research Lab in Riverhead tells me that over the years the numbers and outbreaks of Japanese beetles has been dwindling, but let’s see if that lasts or is just a short-term trend.

Several beetles have stages when the young are in a borer stage. This is true of many of the recent invasive species like the emerald ash borer, which is only controlled by using a systemic insecticide injected into the tree.

If you grow columbines you have certainly noticed the effects of the columbine leaf miner. This is the larva of a fly that develops within the leaves of the plant. Few choose to control this insect, but I understand that you can manage it by spraying neem oil on the foliage prior to the fly laying her eggs. Neem is also said to have a deterrent effect on many of the rose beetles, but so far I haven’t seen good results.

Then there are the mites, which are not true insects. For the most part we have to deal with the two-spotted spider mites, or 2SSM. Most garden insecticides don’t work on these mites — as they are not insects. They can be effectively controlled with oils, though, including neem oil and ultra-light horticultural oils. Water will also wash them off the plants, but you need to be persistent. Using the wrong insecticide on mites can result in worse infestations.

Thrips can also be an issue in garden plants, especially on Delphiniums. These are very difficult to control as the insect develops and does its damage while the flowers are young and the insect not exposed to treatment. Thrips can also show up on other ornamentals, and when the damage is noted it’s usually too late.

Ants are not an issue, but an indicator. On peonies the ants feed on the sweet nectar that the new buds produce and they do no damage. When seen on other plants they can usually be an indicator that other insects are present and producing honeydew, a sugary sweet excrement that the ants love. The ants are just indicators, not the issue.

As always, do your homework. Never use insecticides in a manner contrary to the label instructions and never assume that using more than instructed will yield better results. Keep growing.

There are two mistakes that both neophyte and experienced gardeners make when planning and executing ... 14 Apr 2022 by Andrew Messinger
×