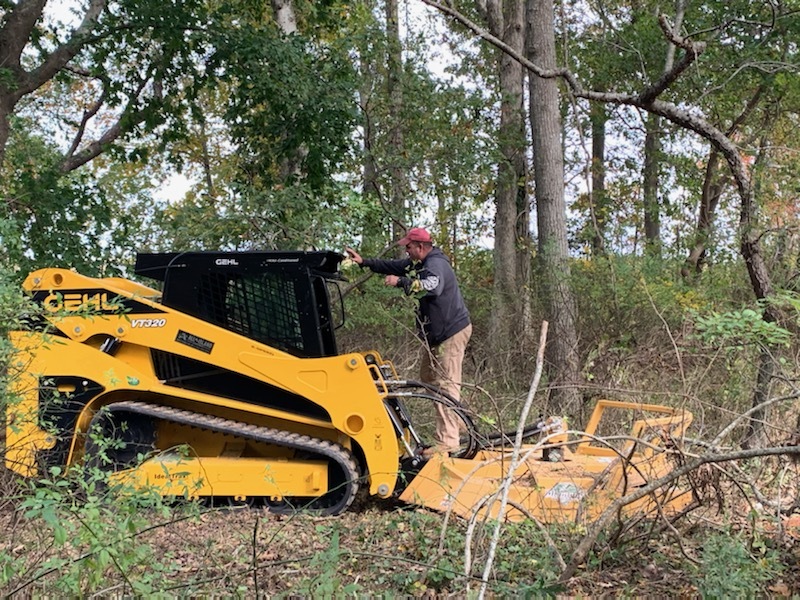 A Water Mill resident is furious after Southampton Town Highway Superintendent Alex Gregor and his crew pulled a tractor onto a scenic drainage easement on her property in October.

Marilynn Lieberman and her husband, Bruce Lieberman, own a house on Narrow Lane South and an agricultural scenic easement runs through their property, allowing water from areas north and adjacent to the property to flow south toward Mecox Bay.

The portion of the drainage on their property has recently been prone to flooding as frequent torrential downpours batter the East End.

Ms. Lieberman attributes the flooding to a set of crushed culverts under a common drive in her four-home subdivision, along with Mr. Gregor’s crews maneuvering dirt into mounds along the road that channels the water onto her property.

For the past few years, Ms. Lieberman has been calling the highway department to do something about the flooding. She also requested the declaration on her property from the building department and discovered the culverts are supposed to be maintained by the town to allow continuous flow in the easement.

One evening in April, Mr. Gregor’s crew was plowing mounds of dirt along Narrow Lane, and in response, Ms. Lieberman complained to the building department. A week later, Mr. Gregor went to the Liebermans’ house, she said, and told them he has the right to go onto the easement and do what he wants.

But that did not stop Mr. Gregor from doing what he needed to do.

“A month ago, I hear a commotion outside and walk to the front and there is literally a full-blown tractor 60 feet into my property,” Ms. Lieberman said. “He actually started to clear my land.”

As a result, she went outside to confront the crews and told them to leave. Ms. Lieberman also took pictures and was advised by someone in the building department to call the police, which she did.

“I thought I was seeing things on my property,” she said. “[Alex Gregor’s] telling me that he owns my property because he has an easement. You don’t have an easement to drive on it. This is an easement for nature, not you.”

Mr. Gregor said this week that the town has an agricultural drainage easement that was granted on February 21, 1984. Bridgehampton and Water Mill, before the houses and agricultural areas were established, always served as natural drainage areas.

Ms. Lieberman’s property, he said, is relatively low and the drainage pipes were clogged with silt from runoff as well as cut brush and leaves.

Mr. Gregor acknowledged that he met with the Liebermans before the summer to discuss what needed to be done to get drainage to improve, and Mr. Lieberman was in favor of the work. Ms. Lieberman, on the other hand, was not.

Once Mr. Gregor rented the proper-sized tractor to get onto the property, his plan was to clear a 10-foot-wide swath and blow out the pipes under the common driveway.

“[Ms. Lieberman] was very upset and started yelling and screaming at my men … telling them to get off the land,” he said, adding that the crew leader told her they were there to clean out the pipes. “The employees got tired of getting yelled at.”

Ms. Lieberman said one of her neighbors was a lawyer, to which Mr. Gregor told her to get the lawyer involved, or “lawyer up,” according to her.

Mr. Gregor said, ultimately, he was trying to help. His crews cannot replace the culverts because they belong to the homeowners who own the driveway. But they can clear them out to help get the water to flow.

“We were trying to help — that’s our job, to try and help — not listen to people scream at us,” he said. “We were just doing the minimum to try to get in there to allow the water to flow.”