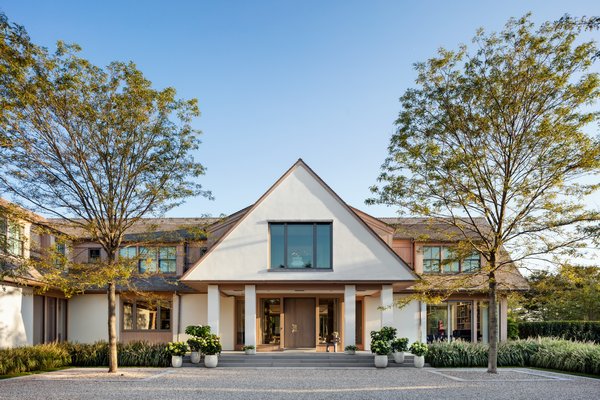 The entrance court with the hydrangeas framing the entrance. 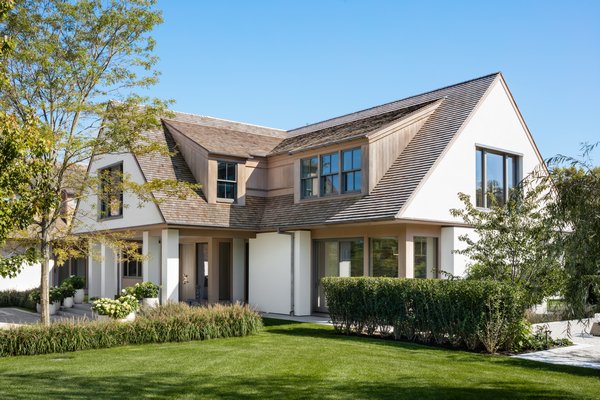 The play of dormers set against gabled end walls. 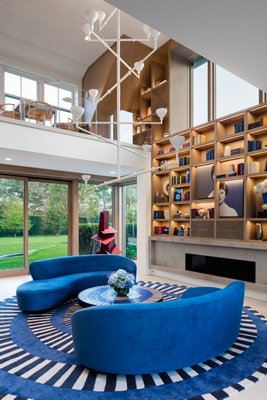 An example of Kelly Behun's work: The library, a two-story space, with a centerpiece arrangement of Vladimir Kagan sofas sitting on a circular rug. 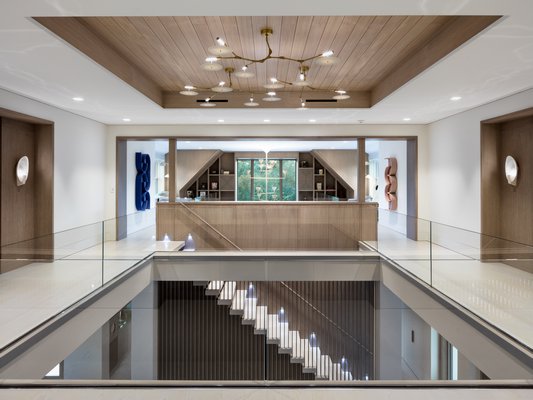 The staircase leading to the second floor. Neutral, lightly stained wood is used throughout the house.

Call me a skeptic, but when the term “collaboration” is mentioned, I always think of a beloved design professor in architecture school who said, “A group project is a camel designed as a horse.”When the Southampton Arts Center program titled “Conversations in Fashion, Architecture, & Design” was announced, featuring a discussion on “The Southampton House” project, by the “dream team” of Sag Harbor architect James Merrill, landscape architect Edmund Hollander (AD 100 Landscape Architect), and interior designer Kelly Behun (AD 100 Interior Designer), I had to ask myself if I’d be hearing about a camel or a horse.

The program held Friday and moderated by Cristina Cuomo, editor and founder of Purist, a print and online publication established in 2017, explored the nature of the collaborative effort between these design professionals. The house was featured in the June issue of Architectural Digest.

When asked by Ms. Cuomo how a team of professionals is assembled — who, for example, comes first in the pecking order — Mr. Merrill said there is no set order. Sometimes he’s hired last, but design actually starts with the site plan. Ms. Behun noted that the architect is often hired first, then the interior designer and the landscape architect last.

For the Southampton House, the professionals all liked each other and felt they were in service of the client. Mr. Hollander said, “Great projects have great clients.” The design team exchanged ideas and looked at the three disciplines through the intervention of other collaborative eyes. And they also had fun.

Mr. Merrill is often asked when to hire a landscape architect. Consideration is given to how rooms flow inside and then flow to the outdoors. Mr. Hollander looks at the property as a blank canvas but noted that the result is always better when there’s collaboration. He observed that Ms. Behun looks at a terrace and sees how it would work for the family, in terms how they will live there. The entire property is seen as a composition encompassing the natural environment and human activities: “Assembling a team early is great, because everyone gets to know one another.”

He mentioned that they all saw each other’s point of view, even though their perspectives were different. When the conversation turned to style, Mr. Merrill said that clients always ask about style and what the style of their home is. He observed that we could be limited by style or break the rules and not be stuck in one style.

Ms. Behun added that she didn’t want to be stuck with a style label. Mr. Merrill added, ”Styles are products of architectural periods, and we’re in a post-style period now.”

When Ms. Cuomo asked how light was used as a design element in the house, Mr. Merrill explained that the length of the house ran along the east-west axis, and the way to bring southern light into the house was to bump out wings to face south.

Ms. Behun mentioned that the incorporation of natural light was what really made the house successful. Mr. Hollander added that the landscape creates a setting for the architecture and from the inside it also frames the view of the landscape outside.

The discussion turned to what makes a house sustainable and, thankfully, there was no ramble about energy efficiency. According to Mr. Merrill, a home has to be personalized to be timeless, and he considers how the family will evolve in the house. He added that for a house to be sustainable, you don’t want to see it torn down in 10 years. A house that precludes personalization won’t survive.

Along similar lines, Ms. Behun said that she always tries to do something that is unexpected. Mr. Hollander felt Ms. Behun truly designed the interiors expressly for the clients. All three acknowledged that the collaboration was, in fact, synergistic and made for a truly satisfying experience when it came to the practice of their art.

The house, on its 4-acre site, presents the aura of the regional, traditional Hamptons idiom, with its scaled-down second story that’s all wood roof and dormers blending with crisp modern lines and smooth stucco-paneled walls and cross gables. Make no mistake: This is a very modern house that fits in the Hamptons landscape without having a discernible style.

As for challenges in the future, Mr. Hollander acknowledged his design has to live and thrive in the landscape. While he enjoys the construction process, he quipped, “Plants are living things — they don’t listen to me, and that’s unfair.” His job, however, doesn’t end with the installation, and he’ll come back as the plantings evolve to see what’s worked and what may need to be modified.

He’s also excited about his landscape design project for the Kennedy Center expansion in Washington, D.C. Mr. Merrill is looking forward to working on a little project in the wetlands, which is a bit of a straitjacket. He said he believes it’s much better to build small, build well and make something wonderful than to spend money on a house that’s all about a large amount of square footage.

Ms. Behun is coming out with a new furniture line — but her biggest challenge is finding a new project where she can work again with both Mr. Hollander and Mr. Merrill.

In this project — clearly a true collaboration — there were no humps to straddle.

If Mocomanto were to be recreated in Disneyland, which version of the historic house would ... 5 Feb 2018 by My27east

A demonstration and talk by Prudence Heston, held on Saturday at Salt Air Farm in ... 22 Jan 2018 by My27east
Sign in to comment