When getting into hot water is a good thing - 27 East

When getting into hot water is a good thing 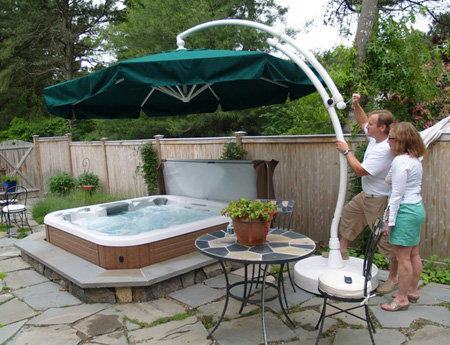 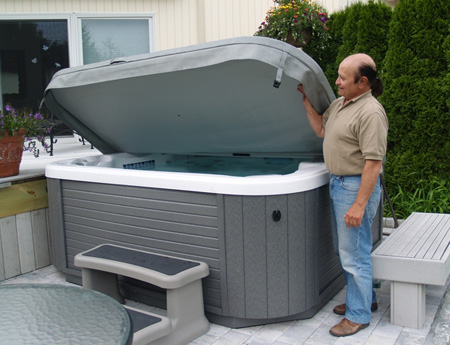 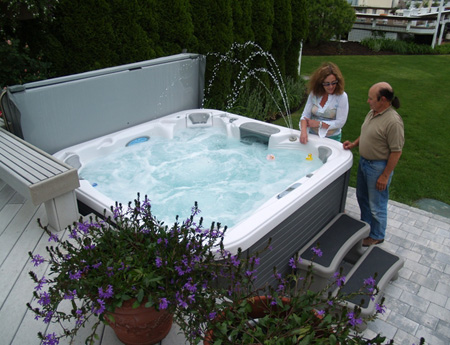 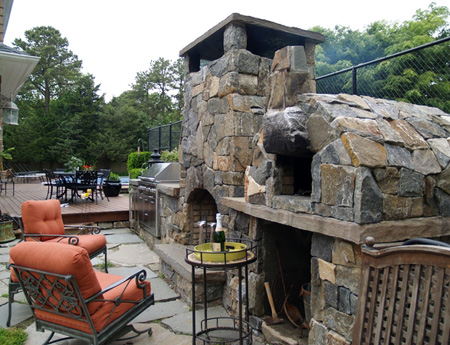 Lou and Kathy Cillo are in some serious hot water, but the Westhampton Beach couple loves every minute of it. That’s because just last month the Cillos purchased their first hot tub.

The two placed the outdoor spa next to their backyard porch, which overlooks Moriches Bay. Last week, Mr. Cillo reported that the pair is already making frequent use of their bubbly new addition.

“It’s great. You feel like you’re on vacation,” Mr. Cillo said. “We’re sitting in the tub, having a drink, overlooking the bay. It takes your mind off business and the worries of the world.”

The Cillos purchased their hot tub from John’s Swimming Pools in Westhampton Beach, which ironically no longer sells swimming pools, but instead does a brisk spa business and continues to sell pool-related toys and maintenance items. President Linda Schoeck, who runs the business with executive manager Stanley Schorr, said her business gave up selling pools roughly five years ago to focus on hot tub sales.

“People just love them,” Ms. Schoeck said of hot tubs. “There are some

that come with this high-powered jet in the middle of the spa, it’s like having your own personal masseuse at your beck and call.”

In the most common usage of the words “hot tub” and “spa” there is no real difference between them. Both are used to describe tubs of hot water that use jets of forced air to produce currents and bubbles, either for therapeutic or strictly pleasurable purposes.

The distinction between a hot tub and a spa depends largely on who is doing the defining. Outside the pool and spa industry, hot tubs and spas are often referred to as “Jacuzzis,” but Jacuzzi is a brand name of hot tub or spa, such as Xerox is a brand name of photocopy machines.

Whatever they may be called, hot tubs or spas are available in a variety of sizes and styles. But Ms. Schoeck said that it is not what is outside, or even inside a hot tub that matters as much as what is behind the spa, meaning the backing of the company that sells it.

“You want to deal with a reputable company that will be there for you ... Even on the weekends,” she said.

When it comes to hot tubs, the bubbly bathing units are available at large chain stores, such as Home Depot and Lowe’s, starting under $5,000. But Ms. Schoeck said customers should expect to pay at least $10,000 to $12,000 for a decent basic hot tub.

She stressed that repairs are also important considerations for hot tub buyers, noting that customers could find themselves in unwanted hot water should mechanical problems arise when there isn’t a service contract. Service is not typically offered at the larger box stores, she said.

“These types of companies are not going to have a technician available, let alone on the weekends when spas are mostly used and typically when things go wrong,” Ms. Schoeck added. “If you bought a hot tub or a spa from a fly-by-night business or a department store, nobody is going to be able to help you.”

Mr. Schorr reported that the options for spas are enormous. He said that hot tubs range vastly in size and style. Size and accessories also play a factor in price. An in-ground spa can run into the tens of thousands of dollars, but those expenses are largely due to landscaping, additional plumbing, labor and material costs. He also advised staying away from unnecessary electronic extras, such as built-in stereo and television systems.

“A lot of water and electronics is generally not a good idea,” Mr. Schorr said, admitting, however, that he opted for a radio with his personal hot tub. “The reception is lousy and when it breaks, who is going to fix a radio or television in a hot tub?”

Mr. Schorr said that the important thing to have is a spa with sound construction and reliable plumbing. He noted that electronics are extremely important, but only when it comes to heaters and air jets.

“I’ve seen some heaters that are just underpowered for the size of the tub,” Mr. Schorr said, “and that can really drive up your heating prices.”

Mr. Schorr said there are a couple of ways to help keep electricity costs down.

First, customers should make certain that their chosen hot tub comes with “full foam,” insulation. Full foam types of spas rely solely on the foam for their structural support. More than 70 percent of hot tubs manufactured today use this method of insulation because it is an effective way to insulate, as well as support hot tubs.

“In the old days spas used to either have no foam or just a layer of foam,” Mr. Schorr said. “Now, they typically come with full foam insulation, which can really save money in terms of heating your spa.”

It is important to keep spas maintained as they tend to be havens for bacteria, according to Ms. Schoeck. She noted that with chemicals and a simple brushing of the walls, spas are fairly easy to keep up. She said there are maintenance companies that will service spas for roughly $30 a week.

“But it’s really not that hard to maintain them by yourself,” Ms. Schoeck said.

For those who cannot afford, or simply don’t want to shell out the money for a standard spa, there are inflatable alternatives, which start around the $600 to $800 range.

Inflatable tubs are relatively easy to set up. They also use a normal household outlet to heat the water up to 104 degrees. Some versions even come with air jets just like the more expensive counterparts, though inflatables are typically used on a temporary basis for specific events.

But for those who have the money in their budget and a permanent need for heat, a standard spa is the way to go, according to new hot tub owner Karen Cozine, who lives in Westhampton Beach. She recently purchased her new spa at John’s.

“It’s much better than a pool,” she said during an interview earlier this week. “The jets are great ... It’s always there and it’s always hot, it’s just so relaxing and therapeutic. I can’t wait to get in again.”