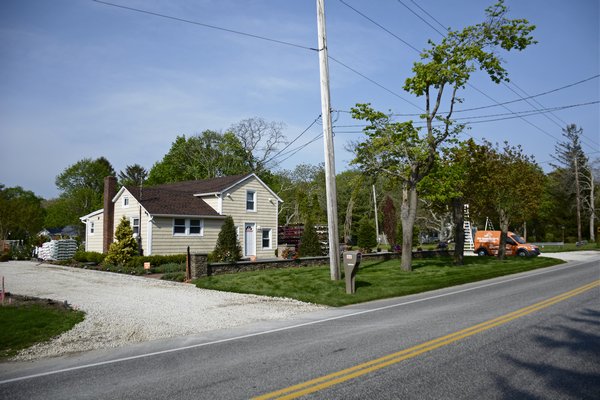 The Garden Department has a new location in Speonk for wholesale plants. JD ALLEN

A wholesale plant nursery has opened at 166 Old Country Road in Speonk. It will be The Garden Dept.’s third location in Suffolk County.

But there’s a slight, quirky road bump in the way of turning the residentially zoned property into a successful business.

The Garden Dept.’s attorney, Stephen Kiely of Edward Burke Jr. and Associates of Sag Harbor, said at a Southampton Town Planning Board public hearing on May 10 that plant nurseries are allowed in all residential zoning districts: “That is, except for CR-200 … That’s why we are here tonight. Because the zoning gods—unfortunately for my client—lop off the back of the property.”

The long, narrow property is split nearly in half between two residential zoning districts, CR-60, or 1.5-acre zoning, and CR-200, or 5-acre zoning. The Garden Dept. wants to sell plants to landscaping businesses in the CR-60 zone, where it’s legal, and use the CR-200 zone to grow the plants—and is seeking a special exception permit from the town to do so.

“There are no special standards for plant nurseries,” Mr. Kiely said. “So the Town Board back in the day, made the determination that there are no unique farms … Arguably, there is not a more perfect site in the town for a plant nursery than this site.”

The approximately 3-acre property—located in the Aquifer Protection Overlay District—has been farmed for the past century. Over the years, as the zoning maps had been updated, the residential neighborhood began to look more and more commercial.

“I have an affidavit from a 94-year-old man who remembers playing there as a kid, and there was a farm,” Mr. Kiely said. “The name of the subdivision is the Farmland Owners Association, so it was meant to be farmed.”

On the parcel is a single-family home, where one of The Garden Dept.’s employees lives. It’s nestled between Homestead Avenue—a private, 50-foot dirt road leading to several houses—to the east and Southampton Town Patrolman’s Benevolent Association meeting hall to the west. The back of the property is surrounded by thick woods, and there’s a landscaping company across the street.

There are three other plant nurseries nearby. No residences are immediately adjacent to the property.

Mr. Kiely also shared letters of support written by two homeowners on Old Country Road. “The only neighbors who would be annoyed by this operation are the chipmunks, the deer and the like,” he laughed.

Planning Board member John Zuccarelli suggested The Garden Dept. also gets statements from homeowners on Homestead Avenue whose front doors face the property. He was especially concerned about what kind of fencing the plant nursery had in mind.

“Perhaps they don’t mind you there, but they don’t want to look at a solid fence all day,” Mr. Zuccarelli said. “Maybe there’s something that could look into where you are growing.”

“I was attracted to the location where the property was situated, and obviously the large amount of new construction and landscape renovations going on in the East End,” he said. “The location on Old Country Road is a hub for landscape contractors to source quality plant material. With that being said, the property was perfect logistically for us to have an immediate presence to the everyday clientele actively procuring nursery stock daily.”

The Garden Dept.’s two other locations are in Coram and Dix Hills.

“This location opens up the brand to a huge menu of new contractors and some of the existing customers, but now they are able to see us just a little closer than in years past. Even for existing customers in the Hamptons that would make the trip at times to our other facilities, we are seeing a jump in the frequency because they are coming for more of their everyday items that they stayed local for in the past,” Mr. Caroleo said.

He went on to say he is actively looking for other real estate in the area to open more locations, in hopes of making The Garden Dept.’s wholesale pricing an industry standard for the East End.

“The landscaper comes in through the front says, ‘I want a hundred of something.’ The plants are brought from the back of the property to the front. They swipe their card, and they are on their way,” Mr. Kiely said. All business communications will be done over radio and not by loudspeakers.

The plant nursery expects a decision on the special exception to be made by May 24.