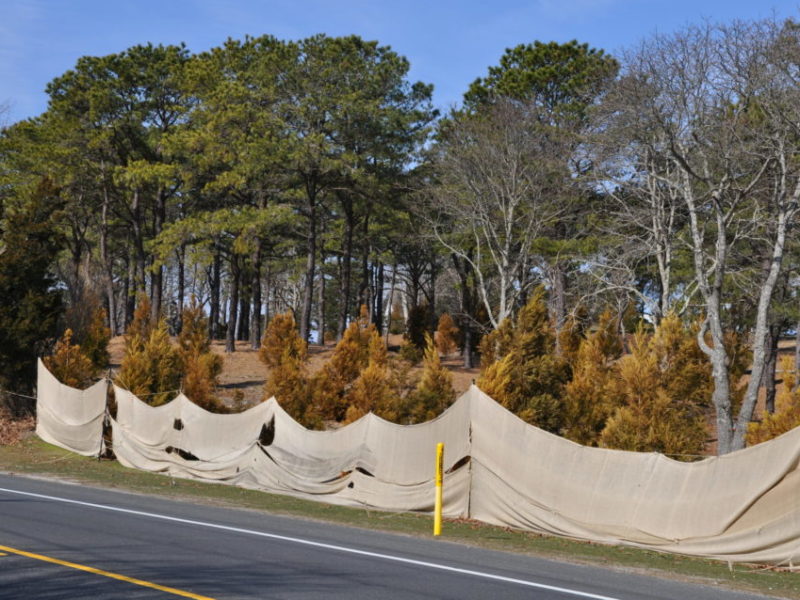 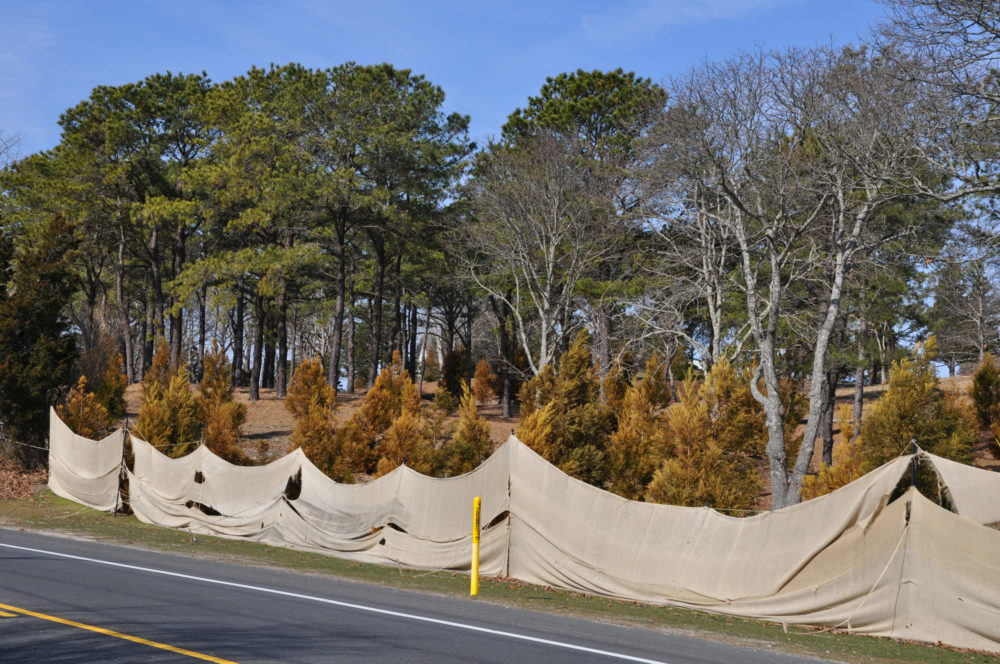 These evergreens just off Montauk Highway in Southampton are “protected” every winter. But you can see that salt spray and salty air penetrate the flimsy burlap, damaging the trees 30 to 50 feet off the highway. ANDREW MESSINGER 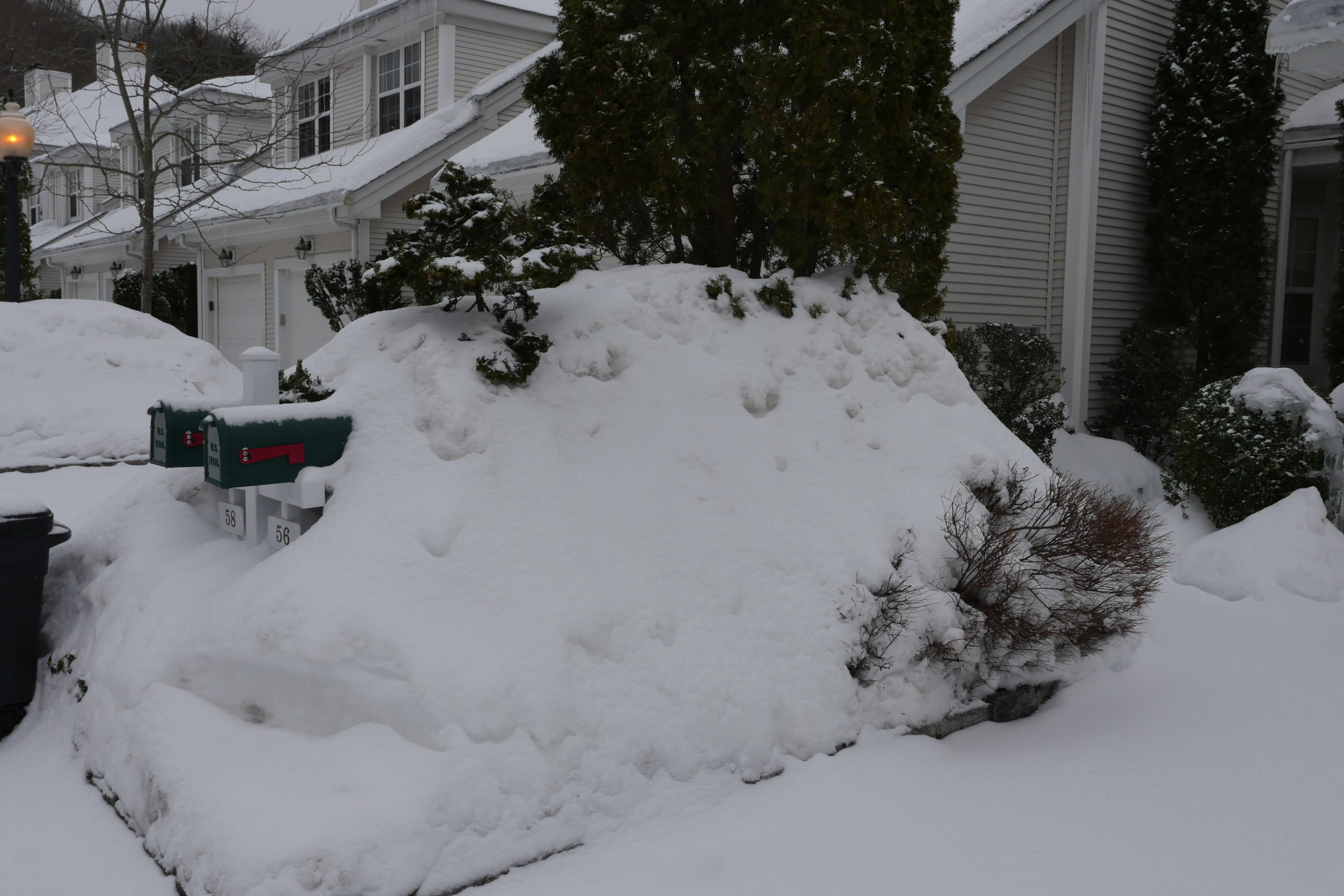 No salt damage here, just shrubs crushed but snow dumped 6 feet on top of them. This is a condo complex where there is really no accommodation for snow that’s been plowed from driveways and roadways. ANDREW MESSINGER 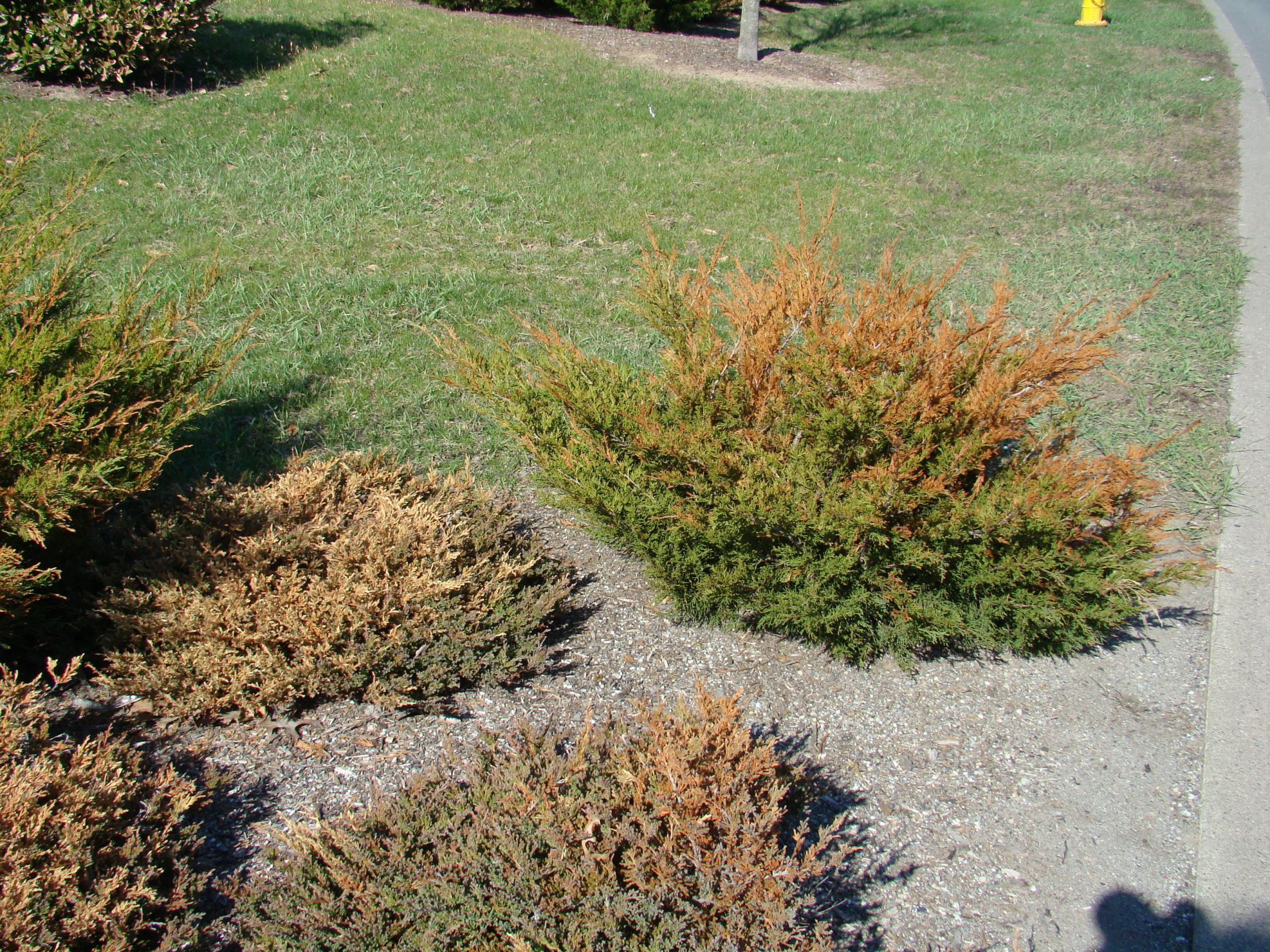 These junipers were burned in the winter from road salt applied just feet away. It appears that the damage is from roots being burned from salt splashing into the bed from the road as well as burning from salt that may have been in the snow plowed onto the planting bed. ANDREW MESSINGER 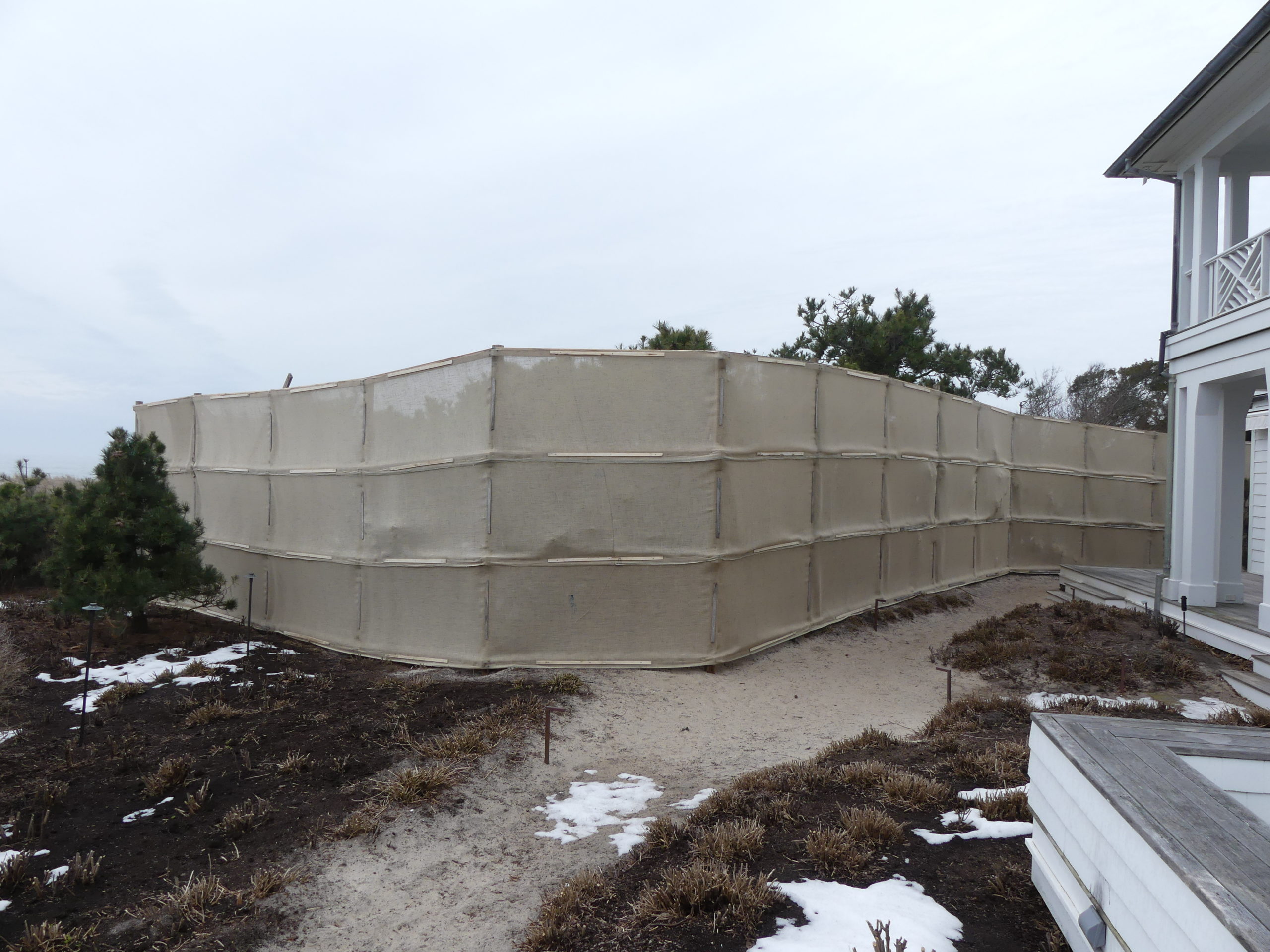 This 12-foot-tall windscreen is erected just off the ocean dune in Southampton to protect pine trees from dry northerly winds and salt spray laden southerly winds in the winter months. In the winter both the salt and wind can be desiccants damaging needles as well as leaves. ANDREW MESSINGER 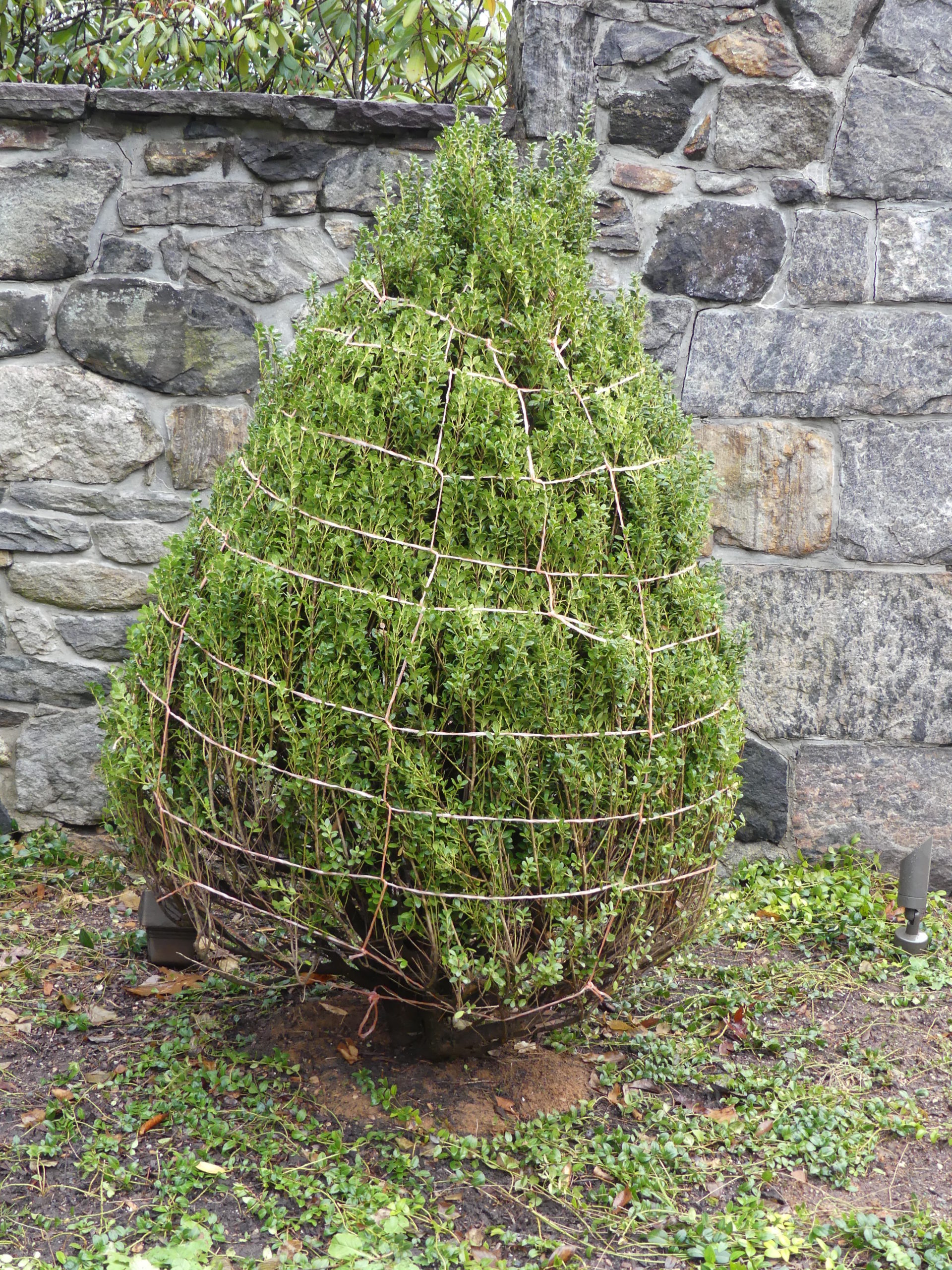 This Ilex, or small leaved holly, had a naturally mounded shape. But to protect from wind, snow and ice loads in the winter months it’s tied horizontally and vertically in a conical form. This forces ice and snow off the plant and also reduces surface area. ANDREW MESSINGER 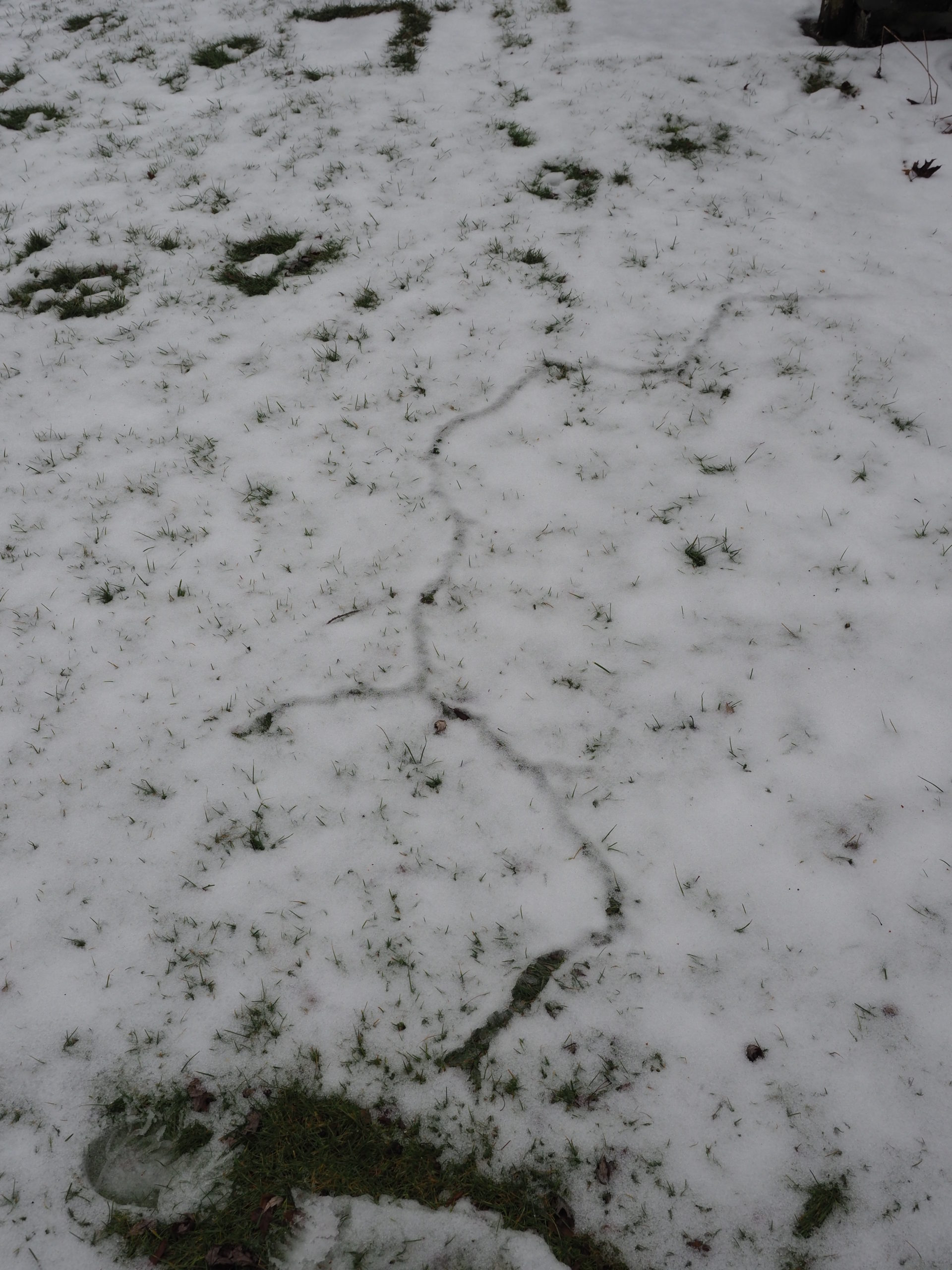 After a light snowfall or when a deeper snowfall melts down to just an inch or so you may notice these trails through the snow. These are caused by voles who tunnel between the soil (or lawn) and the snow escaping predators like hawks. The voles are traveling between feeding places looking for crowns of perennials or bark from fruit trees to munch on. ANDREW MESSINGER 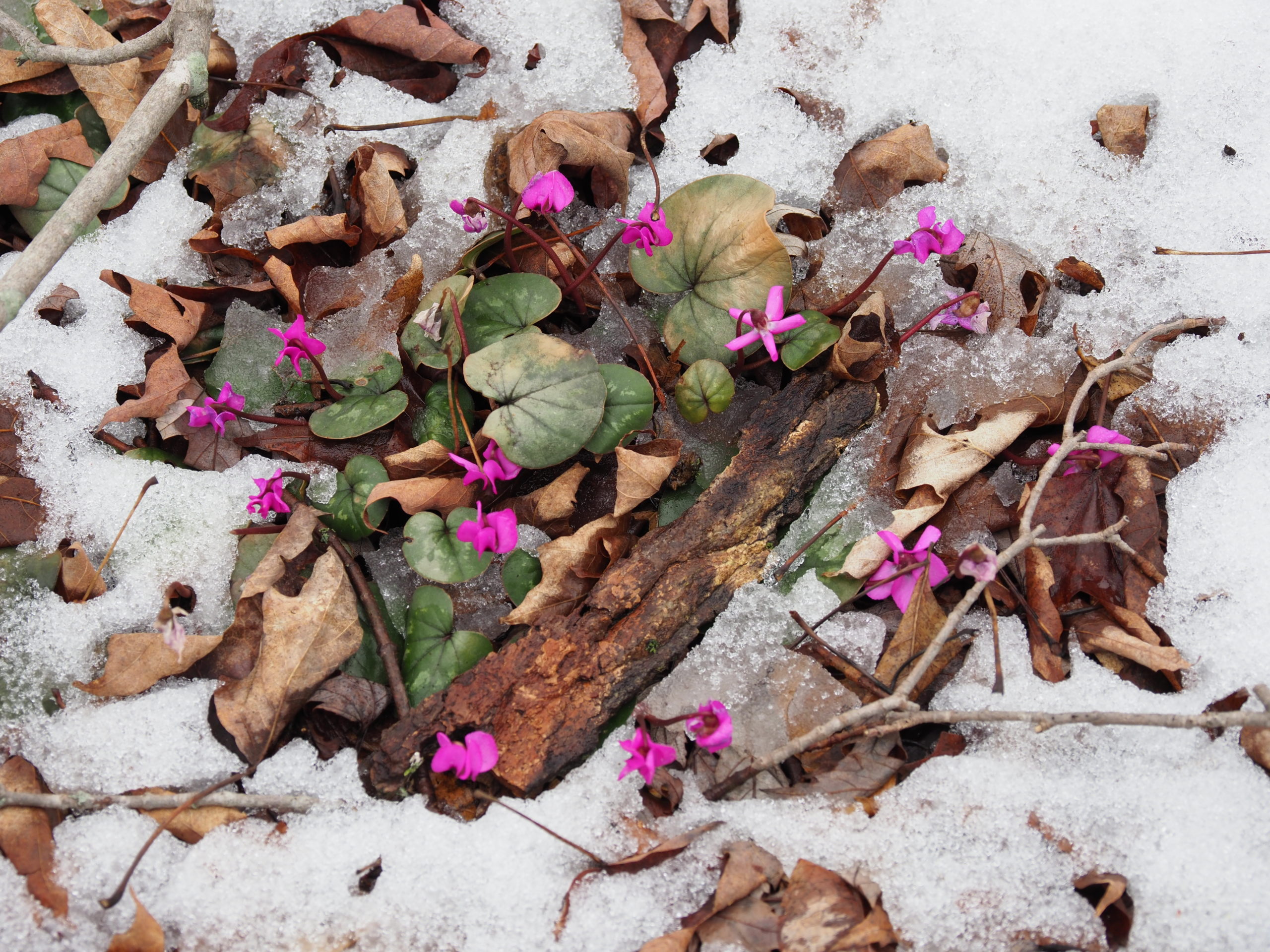 When applying winter mulches some plants need to be left uncovered. These Cyclamen coum don’t appreciate being mulched and the mulch will also hide their magnificent February and early March flowers under pines, oaks and maples. ANDREW MESSINGER

While you were busy wrapping your holiday presents, maybe you forgot to do some wrapping outside? And while you were warm and cozy inside, you may have thought that you had everything in the garden tucked away and safe for the winter. Guess again, my friend.

But it’s not too late, and it’s not too cold. Yet. Meteorologically, our coldest period out here is now through the end of February.

You may be under the mistaken impression that winter damage to our plants (trees, shrubs and perennials) occurs when it’s bitterly cold out. Well, that’s not entirely true. Yes, there can be widespread damage to many plants if they stay very cold for very long. Let’s say down into the single digits for a week to 10 days. This type of cold penetrates deep into the ground and the depth and length of the cold can be a challenge for many borderline “hardy” plants and those that are old or otherwise under stress.

Winter damage can also occur on a beautiful winter day when the sky is blue, there’s a light but persistent wind, the air is warm —and the ground is still frozen solid. Under these circumstances, damage to evergreens, both broadleaf and needled, can be a big possibility. This can include shrub Ilex (hollies) and boxwood, as well as arborvitae and similar landscape plants.

On these warmish winter days, the combination of bright sun and a light to moderate breeze increases transpiration in many evergreens. As a result of this “breathing,” the small pores in the foliage begin to open and try to let moisture escape from the plant as part of its natural cycle as a living plant with foliage. Yes, needles and the flat surfaces of all these plants are still foliage and still capable of functioning in the depths of winter.

One great demonstration of this and a plant’s reaction is on rhododendrons. In the winter when it’s bitterly cold the leaves of many rhodies will curl inward in a natural effort to reduce the foliage exposure (surface area) to evaporation when the plant can’t move water from the root zone into the leaves. We also see this phenomenon in the summer during periods of heat and drought when rhodies exhibit the same reaction of curling leaves. In some cases, with prolonged cold or drought, we later notice that these leaves never unfurl from the desiccation damage and a number of branches can die back.

As these cells open and begin to release water and oxygen, if the ground is still frozen, they are unable to draw water from the root zone to replace water that’s evaporating. The result is often seen later in winter or in the spring when we note the brown leaves and needles that desiccated or just dried out.

There are, however, a few things we can do to mitigate this situation. The first is the use of an antidesiccant. These are sprays that add a waxy film to the foliage, which in turn reduces the evaporation of moisture and also gives some protection from drying winds. These materials are somewhat hard to work with and often best applied by an arborist, and in some years, they are applied twice. However, you can apply a product like Wilt-Pruf as a ready-to-use spray (RTU), but keep it indoors until you’re ready to apply it.

Another thing that can help is a winter mulch. I see too many gardeners and landscapers removing the pine needles from under their pine trees to “tidy up.” If this natural mulch is left in place or if a light organic mulch is added in early winter, the soil tends to stay cold but may not freeze as quickly as unprotected soil. This allows for more water transport into the trees since the ground won’t freeze as quickly or as deeply. This can also help with rhodies, but in both cases make sure to keep the mulch about a foot away from the trunks so you don’t encourage voles who will gnaw on the bark while being hidden by the mulch.

Another method of protecting plants from wind and sun damage in the winter is to cover them with burlap as a windscreen or a wrap and to tie the plants. Burlap covers can be very effective protection, but if not installed properly in a manner that allows snow to fall off and away from the wrapped plants they can simply be crushed and damaged anyway. Here again, if you have large and expensive plantings of shrub Ilex or boxwood this is usually a good investment. Some don’t like the sarcophagus appearance of the wrapped plants, and if you fit in this category you can have the plants tied. This offers some protection and isn’t quite as aesthetically offensive, to some.

Try to remember if snow and ice falling from your roof has damaged any foundation plantings in past winters. If it has, some type of sheltering can be called for to force the snow and ice away from these plants instead of crushing them.

There is another consideration that can result in winter damage, and that’s salt. Until recently, we thought that only sodium chloride was a problem. This is the salt we use on our food but is the same salt we use to treat roads and driveways and is called rock salt. We’ve known for quite a while that this type of salt can damage plants in two ways. The first is when it gets diluted with water and enters the ground and root zone of plants. In very simple terms, the salt kills the roots, leaving them unable to absorb moisture. The second problem is when the salt becomes airborne from salt spreaders or when it’s added to sand as a brine for ice melting on roadways. When it comes into contact with plant foliage it burns it, and there is no recovery. This damage can be seen as far as 20 feet from a roadway. This damage is also seen during storms and hurricanes when salt spray is picked up from the ocean and is blown inland where it can damage landscapes a quarter mile or more from the ocean and bays.

There are other salts that we use for sidewalk, driveway and roadway treatments, and we’ve been told that these are “safer” alternatives. But science is showing otherwise and that all these salts — calcium chloride and magnesium chloride as well as sodium chloride — do not disappear from our environment and are actually causing serious problems in our wetlands and our landscapes.

The salt issue is being carefully watched by environmental groups. It seems it could be more of an issue upstate than down here, but the environmental damage can occur any place where these salts are being used. It’s worth speaking with our local towns and villages to let them know you’re concerned, but think of what you can do at home as well. Limit your use of any of these salts. One way to reduce their use is to mix them sparingly with sand so that when the melting takes place there is grit left behind for traction thus reducing the need for resalting. Keep these salts far from your plants no matter how “plant safe” the label says it is. Remember, the effects are cumulative and these salts aren’t simply washed out of our soils.

Keep in mind also that all is not dormant out in your garden. The voles are alive and well and chewing on fruit tree bark as well as looking for crowns of perennials that they eat for winter sustenance. Voles never stop, never hibernate and they reproduce all winter. You’ll see their evidence as tunnels in the snow just above the turf as any snow melts. Don’t wait though. Control them now with old fashioned mouse traps baited with small pieces of apple. Bait the traps often and keep them in the perennial beds, around blueberries, raspberries and quince plants as well as the trunks of apple trees. Keep growing.

With the effects of climate change, it seems to get harder and harder each year ... 31 Oct 2019 by My27east

Could I interest you in a plant that will flower during the Christmas holiday season, ... 18 Oct 2019 by Staff Writer
Sign in to comment