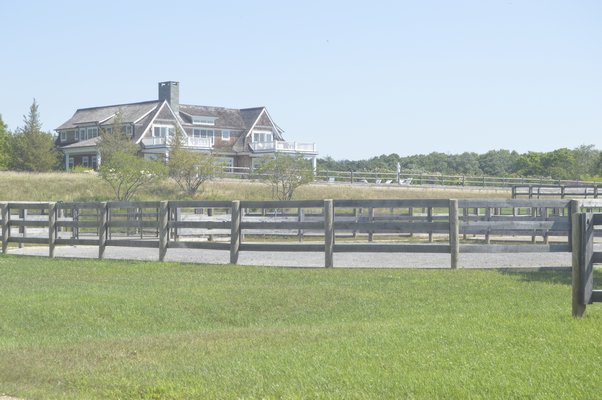 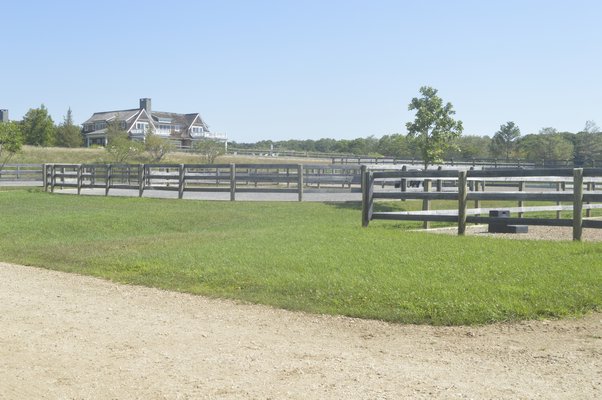 A view of the Wassermans' property from Bright Side Farm. ALYSSA MELILLO

Matt Lauer has a new argument to combat protests about trees he wants to plant at his horse farm in Water Mill.Noise from neighboring properties spooks and startles the horses, potentially putting riders in danger, the Today Show" co-host argued at a public hearing before the Southampton Town Planning Board on July 23.

“It’s happened quite frequently," said Mr. Lauer, who owns the farm with his wife, Annette. "We’re very fortunate … that no severe instance of spooking or startling has happened."

“These are thousand-pound animals," he said. "And when they get spooked, and if they get spooked badly, and there is my daughter, an 80-pound rider on that horse, or my wife, whose weight I will not mention ... the rider always loses."

The trees would serve as a buffer for the trail, he said. The 42 trees and 194 shrubs he wants to plant would go along the northern boundary of Bright Side Farm, which is located on Deerfield Road. Neighbors have argued, however, that the plantings would violate the terms of an easement that went into effect when Southampton Town bought the development rights for the Lauers' property, as well as a condition set by the Planning Board in 2012 that views of the horse farm should be maintained.

According to Mr. Lauer, there are often parties and large gatherings of people in the backyard of Jack and Jodi Wasserman in particular, which is the closest house on Farrell Court to Bright Side and borders the site of the proposed landscaping. Mr. Lauer told the Planning Board he is concerned that without the proposed screening, those activities will eventually lead to a spooking or startling incident that could severely hurt a rider using a trail bordering the Wassermans' property.

In response, the Wassermans are calling on Mr. Lauer to close his farm if he chooses not to move the trail, since it appears to be a safety concern. The couple has previously said that the trees would obstruct their view of Bright Side's open space.

"If the Lauers truly believe any actions from the Wasserman property will spook a horse and create a danger, the simple and only viable solution for the Lauers is to move their allegedly dangerous stretch of trail a safe distance from the Wassermans’ yard and onto another portion of their 40-acre farm," the Wassermans said in a statement their attorney, Patrick Fife, provided after the public hearing.

"If the Lauers do not want to move their trail, they should close Bright Side Farm and cease putting the safety of their riders and customers at risk."

At the public hearing, one of Mr. Lauer’s attorneys, Edward Burke Jr. of Sag Harbor, had expanded on Mr. Lauer's comments and stressed that the proposed landscape is not intended to prevent the Wassermans from seeing the open vistas of Bright Side Farm.

"It’s not about celebrity status and seeking to shut out the outside world, and it’s not about creative measures under our town code to orchestrate some kind of legal loophole,” Mr. Burke said. “It’s about coming before you tonight seeking help. We're concerned because our approved riding trail and our approved paddock area are in very close proximity to our neighbors and their backyard, and their rightful backyard activities. We’re not here to diminish them in any way.”

The attorneys brought in local horse experts to testify to the need for the landscaping. Shanette Barth Cohen, executive director of the Hampton Classic Horse Show, said horses behave differently on a trail than they do in a ring, and are more likely to be startled by sudden noises.

“Horses will spook for a lot of different reasons," she said. "When a horse is spooked, they get over it easily, but it’s that piece of time when accidents happen. When they’re out on a trail, often with a more loopy range and just trotting along, even at the walk, they will spook much more easily at loud noises. I have fallen off on two occasions.”

David Birdsall, who lives down the road from Bright Side and has been shoeing horses for 48 years, echoed Ms. Cohen's statement.

“This is a situation that if people are playing in the pool or kicking the soccer ball around … it could be very dangerous," he said. "I’ve seen that happen often without screenings and without borders that are defined."

Last week, Planning Board Chairman Dennis Finnerty said that the public hearing was the first time he and other board members had heard about safety concerns regarding the location of the walking trail. And while the board is still accepting comments–he said he doesn't expect a decision until September–he acknowledged that it was odd for the concern to be brought up several years after the farm was established.

“It’s new information, certainly. It sounds like it’s a standard problem with equestrian facilities," he said. Even so, Mr. Finnerty said, "it’s unusual that it would surface this late in the game."