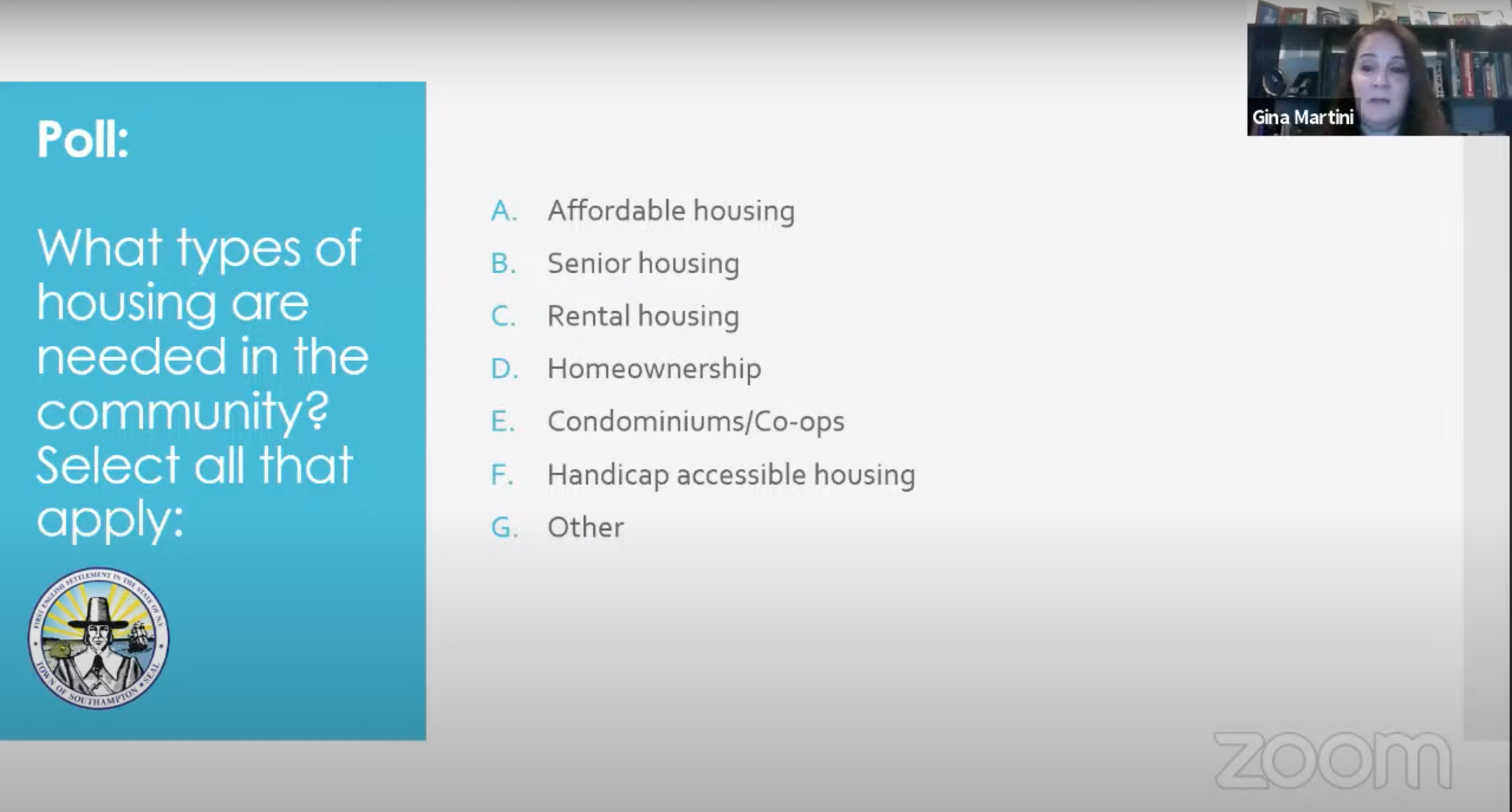 Southampton Town’s updated housing plan will go beyond addressing the need for affordable housing and will determine all types of housing stock that will best serve the town’s future, according to officials seeking community input on the plan.

The scope of the updated housing plan was explained Thursday, July 23, during the second in a series of nine virtual public forums on the topic. Each forum is designed for residents of different areas of the town to give their feedback and ask questions, and Thursday’s was for Noyac and unincorporated Sag Harbor.

Environmental and land use planning consultant Gina Martini of VHB, a White Plains-based consulting firm enlisted by the town, led the forum with assistance from Diana Weir, the town’s director of housing and community development.

Town Councilman Tommy John Schiavoni, who joined the virtual meeting, spoke to the importance of a housing plan.

“This is a challenge that has faced Southampton Town for many, many, many years, and as far as good municipal planning goes, having an updated housing component of our comprehensive plan is really imperative to get various types of housing projects going in the town,” he said.

Mr. Thiele’s legislation passed the State Legislature once before, but then Governor Andrew Cuomo vetoed the bill over concerns about creating a new tax. The assemblyman, having discussed the idea in greater detail with the governor’s office, is hoping that he has assuaged Mr. Cuomo’s concerns so that the bill can be signed into law in the coming months.

“We want healthy communities, a variety of people and ages, and we need that going forward,” Mr. Schiavoni said.

In answering a community member’s question on redevelopment, infrastructure and sustainability, she said all will be taken into account.

Environmental constraints on development will also be considered, she added.

Ms. Martini said that while major sites for new development will be identified, the plan will also look for existing vacant or underutilized sites to redevelop. But it will be broad.

“I don’t think we intend to identify actual sites, because just to identify a site without a site plan or a developer — we really won’t go down that road with this,” she said.

“This is not saying we’re only going to build,” Ms. Weir said of the plan. “That’s not going to solve our problem. We have to use existing properties. We have to create, maybe, accessory apartments, which is not a huge density issue and can be spread throughout the town. So there are many ways to be able to create housing that doesn’t have to do with building new. Because, eventually, we will be running out of land, so we are very well aware of that.”

To join a forum live, visit southamptontownny.gov/publicforums. The forums can be rewatched via SeaTv Southampton on YouTube.