Revisiting The CPF Is In Order - 27 East 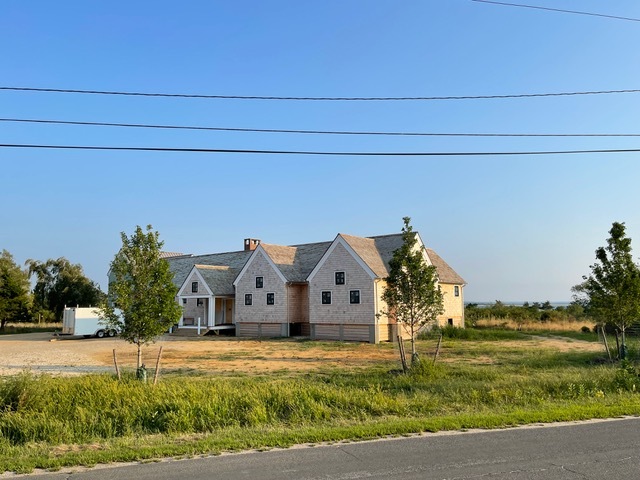 King Street runs east from the village and terminates at Narrow River Road. This house is seen as just as one turns north onto Narrow River Road. The entire village has gone bonkers over this since is it completely out of scale with anything else in Orient. It killed a beloved view of the bay beyond.

The preservation of open space, farmland and community character on the East End constituted the raison d’etre for the establishment of the Community Preservation Fund (CPF). The protection and health of our bays, estuaries, water resources, and wondrous ecological systems go hand in hand with our appreciation of beautiful and irreplaceable natural landscapes, picturesque villages and historic architecture dating back to the founding settlers.

The CPF was created in 1998 by voter referendums in the five East End towns (Southampton, East Hampton, Shelter Island, Riverhead and Southold) when residents approved the establishment of a 2 percent real estate transfer tax on each transaction in these towns. The tax is essentially a one-time-only, special interest tax added as a closing cost to the buyer for the purchase of improved or vacant property.

In East Hampton, Southampton and Shelter Island the first $250,000 of the purchase price of improved land is exempt from the CPF tax while in Riverhead and Southold the exemption is $150,000. For unimproved land, the exemption is $100,000 and $75,000, respectively. On the purchase of a million-dollar house in Southold, for example, $850,000 would be subject to the 2% tax, which translates into $17,000 added to the closing costs.

In 2016, again by a referendum, the tax collection for the CPF was extended through 2050 with a new provision allowing the towns to use 20 percent of their CPF revenues for projects involving water quality.

Undeveloped land that is acquired by the CPF doesn’t require public services such as water, schools, police, roads, libraries, etc., and that helps to keep taxes down. The rationale behind the CPF tax was to avoid adding yet another tax burden to existing homeowners.

Monies raised in each town for the CPF go specifically to that town. Each has a land preservation coordinator who works with a CPF Advisory Board consisting of local residents who target acquisitions and make recommendations to the Town Board. Since 1999, $1.73 billion has gone into the CPF.

Yet despite the well-intentioned premise of the CPF, the amount of monies provided to each town is subject to the whims of a boom/bust general economy. During a recession, the coffers dry up, and when real estate sales surge to extraordinary record prices as they have recently, the fund is dramatically enriched. In the first seven months of this year alone, the CPF revenue is 115 percent higher than last year. There are eye-popping disparities, however, between the towns, and those disparities affect how much can be achieved with CPF monies. At the high end, Southampton has taken in $72.64 million so far this year, while Southold, at the low end, has received $7.47 million. Property values are high in Southampton and significantly lower in Southold, which means that Southold has a lot less money to use from the CPF. Southold Town is 404 square miles with a population of 23,732 while Southampton Town is actually smaller at 294 square miles with a larger population of 69,030.

In the 2015 Suffolk County Agricultural and Farmland Protection Plan, the total farm acreage listed was 6,745 for Southampton and 9,661 for Southold. In Southampton 66.2 percent of the farmland was protected while Southold had only 45.7 percent of its farmland protected. With less money to protect more land, Southold has focused on protecting farmland as its first priority. Although there is a provision for historic preservation in the CPF legislation, Southold cannot afford to provide monies to protect historic facades or tax breaks for façade easements. Of course, there are those who will argue that the 2 percent tax is simply proportionate to existing property values in any of the towns.

Is it time, perhaps, to rethink the apportionment of monies raised by this special interest tax? Would it not be fairer to levy a line item tax as a general budget item where everyone pays into the fund? Looking ahead, what happens when there’s no more farmland left to buy? What good does it do to save farmland if farmers can’t make a profit on their farms? The farmer has to be saved as well. We’ve been lucky because we didn’t have to worry about running out of vegetables and fruit in the pandemic as this produce is grown locally. Keeping farmland in production has to be a priority with the CPF.

What other kinds of acreage will be protected? How many wineries have their development rights intact? What happens if a winery goes bankrupt and the owners decide to subdivide and sell the lots for far more than could ever be had by selling the development rights? There are 55 wineries on the East End with 50 of them located on the North Fork, and that’s a lot of acreage.

Very little has been done about protecting scenic viewsheds, which are disappearing fast. One day you drive down a street and come to a bend in the road and the view of the bay is gone and replaced by a two-and-a-half story, 120-foot-long home on pilings. That’s exactly what happened in Orient recently.

Janice Scherer, Southampton Town planning and development administrator, has called scenic viewsheds “the next frontier of the CPF.” Viewshed easements, where visual corridors act as a relief to the eye, would preserve community character.

How are miscellaneous properties that have been in the fund for many years treated? Could they be recognized and used for a new purpose no one ever envisioned before and yet still fit with the philosophy of the CPF? Should the CPF establish a review board to see future patterns for the East End? And should such a board question proposals and decisions made by politicians that could have unintended consequences?

There has to be accountability when a town co-opts the CPF for projects having questionable public benefit. What comes to mind immediately has to do with the demolition of architect Norman Jaffe’s Chico Hamilton house in 2018. This small house, an early project in the late architect’s career, encompassed all of the themes to appear in his later work. He used light to link the occupant to the natural world while also revealing the textural characteristics of materials and fabrics. East Hampton purchased the house on 0.81 acre from the Hamilton Family Trust for $900,000 with monies from the CPF for open space preservation. The Waterhole Road property fronts Hog Creek, a body of water in distress at that time. Removing structures and lawn on that street would allow for less runoff and better filtration for the creek. This gem of a house may not have been a landmark but it represented the early work of one of the most renowned residential architects in the country as well as the Hamptons. A justification used was that the house wasn’t 50 years old so it couldn’t be landmarked, and that simply wasn’t true. Exemptions to the 50-year requirement are, in fact, made. Can we really call an event like this community preservation? Who’s at the helm when this sort of thing happens?

Revisiting the CPF is certainly in order.

Form-based codes, a methodology for reinventing and preserving older communities as well as inventing new ... 26 May 2022 by 27east

Four Fountains, one of the most unusual houses in Southampton Village, with an equally storied ... 9 Jan 2020 by 27east

A look at patrician history, big and small, was delivered last week by interior designer ... 12 Aug 2019 by 27east

Visceral reactions to what we see in both the built and unbuilt environments are something ... 25 Mar 2019 by 27east

To go to Armenia on a tour exploring the country’s rich culture, history and architectural ... 29 Oct 2018 by 27east
×