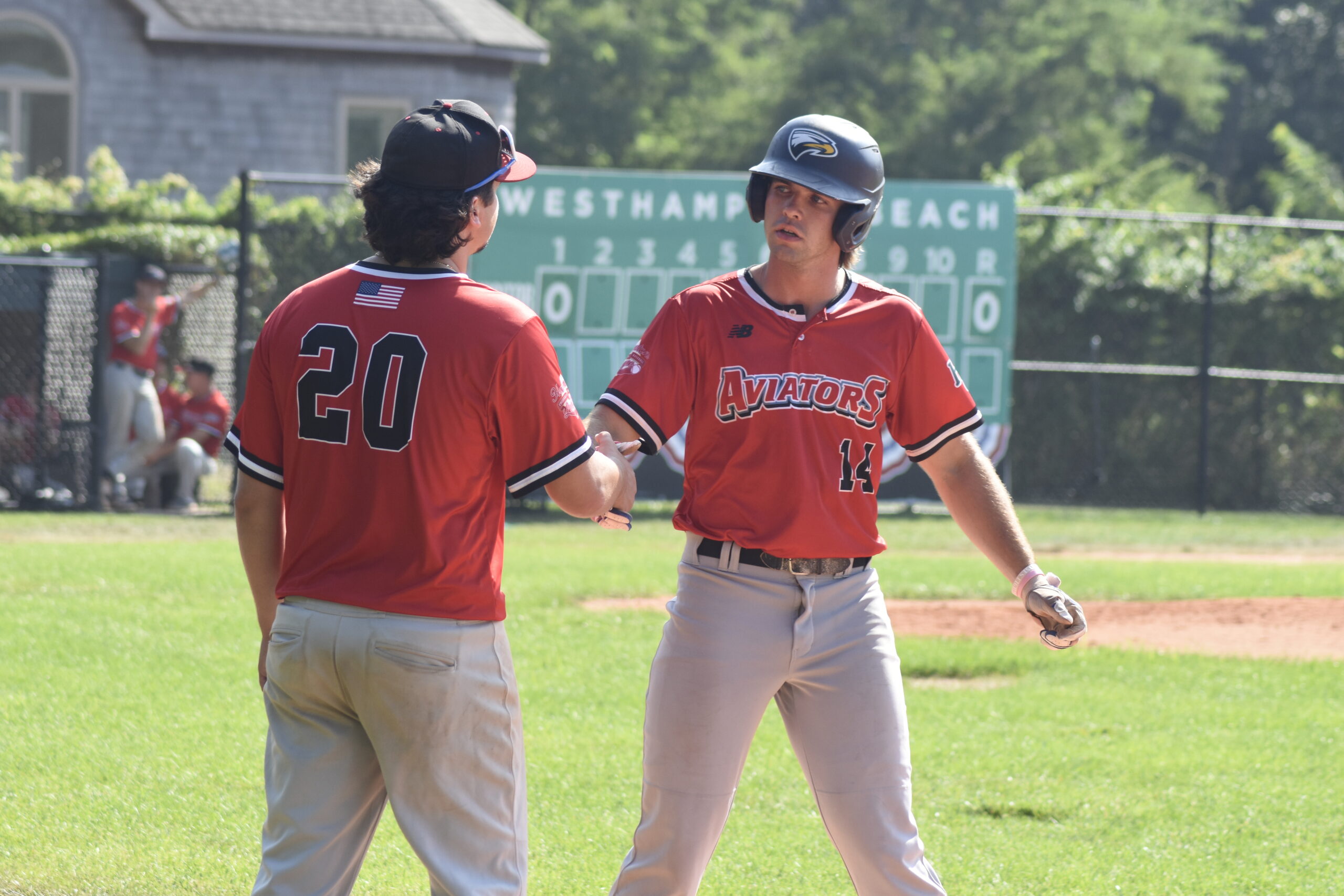 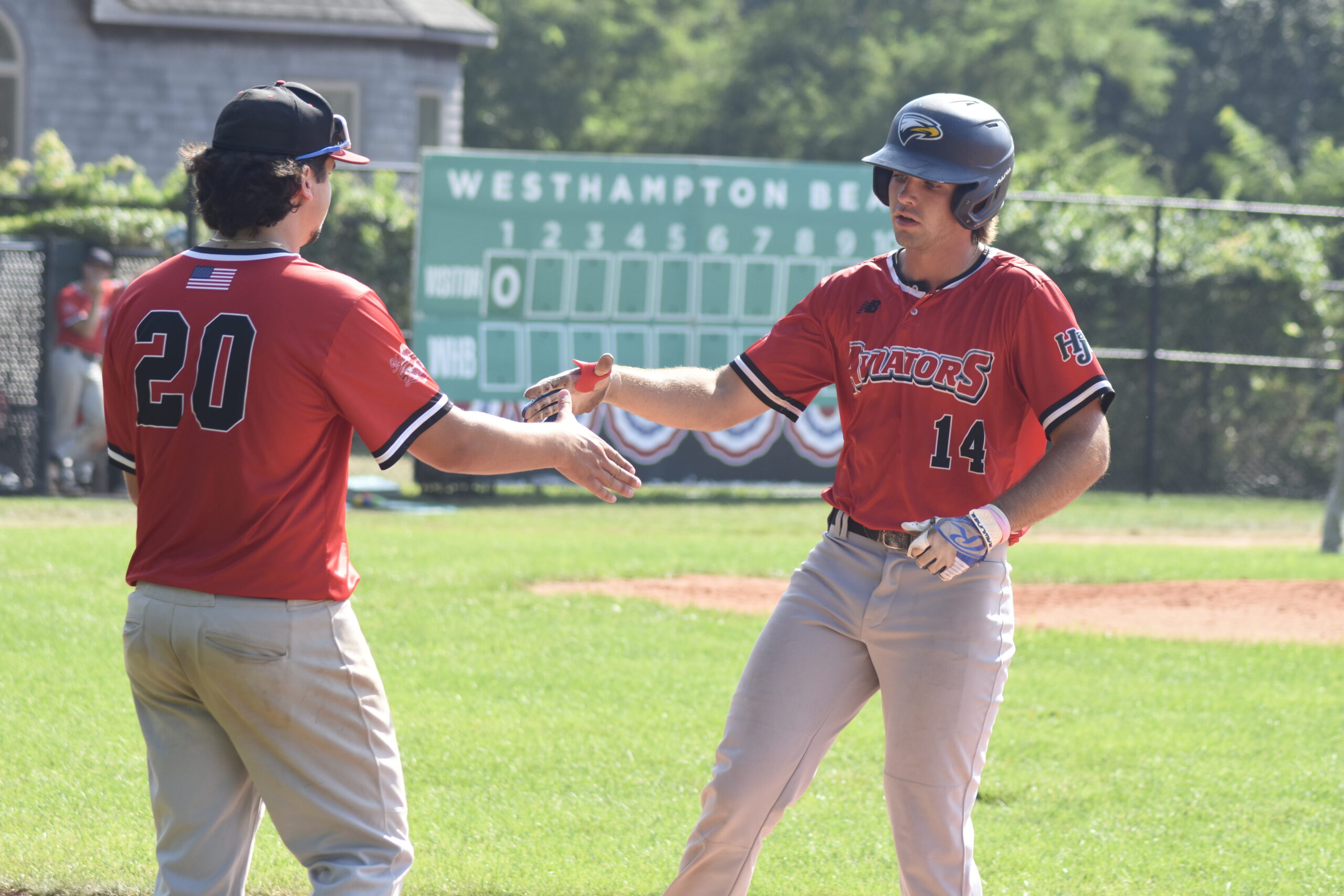 Jack Halloran (Emory) is congratulated by first base coach and teammate Michael DiForte after a base hit. DREW BUDD

Jack Halloran (Emory) is congratulated by first base coach and teammate Michael DiForte after a base hit. DREW BUDD 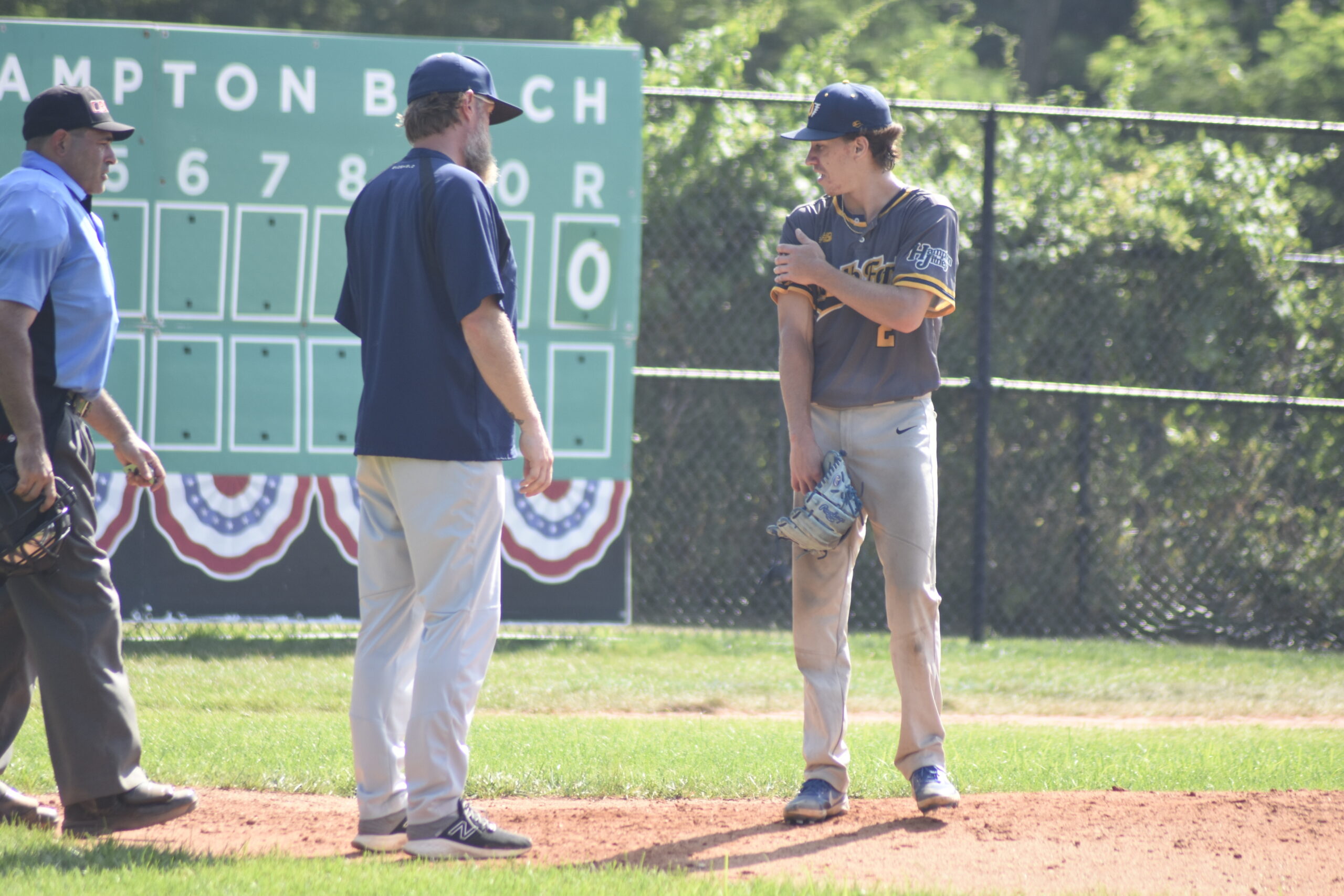 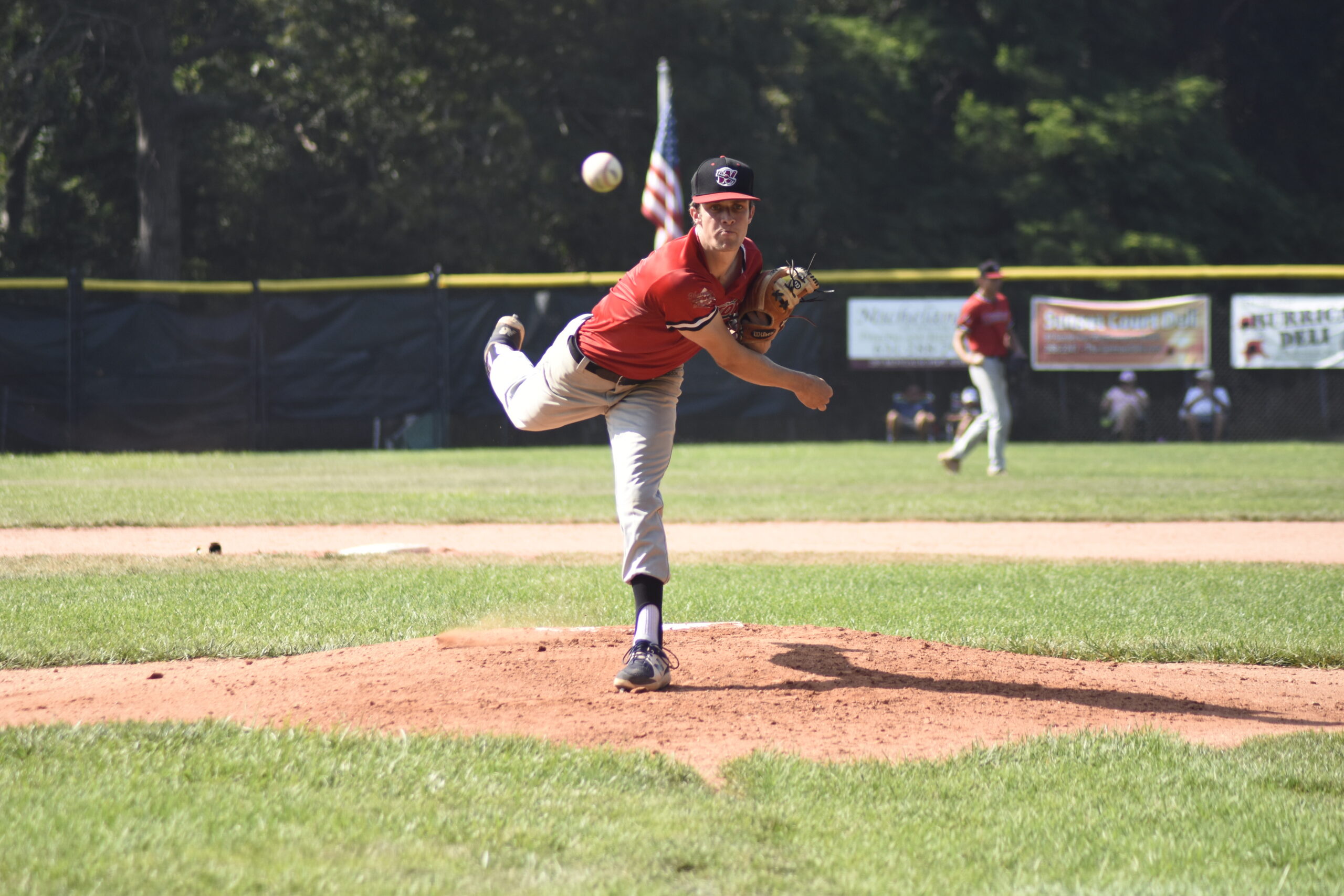 Teo Torrado (Gettysburg) twirled five shut out innings for the Aviators in their wild card game on Sunday, which they won, 7-3, over the North Fork Ospreys. DREW BUDD 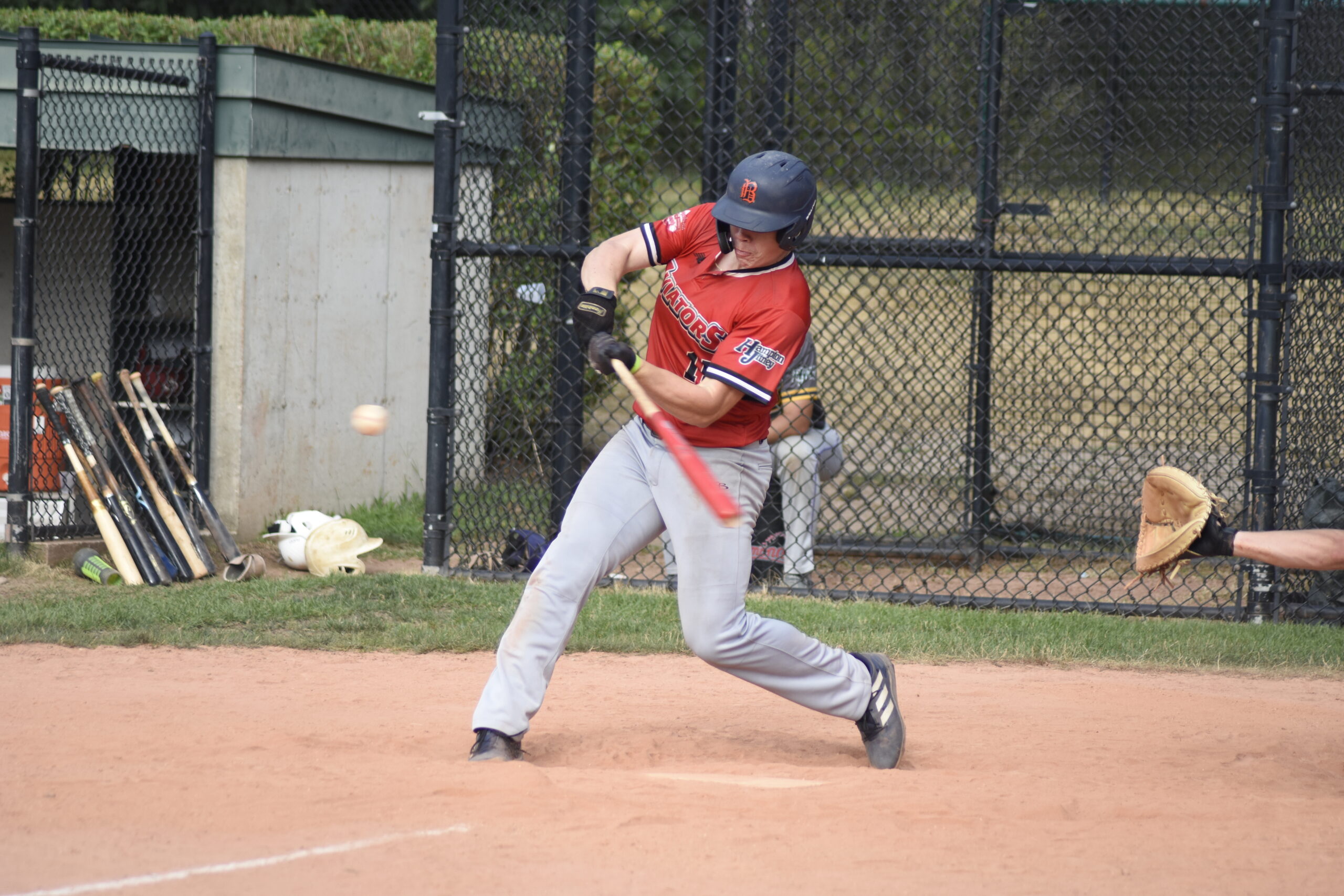 Drew Budd on Jul 26, 2022
It wasn’t too long ago that Jack Halloran was watching the Westhampton Aviators win the Hamptons Collegiate Baseball League Championships. And now he’s got a chance to be a part... more

The Sag Harbor Whalers, the original and longest tenured franchise of the Hamptons Collegiate Baseball ... 1 Aug 2022 by Drew Budd

With runners on first and second base and no outs, the Westhampton Aviators trailed the ... 29 Jul 2022 by Drew Budd

The Sag Harbor Whalers played for their first-ever Hamptons Collegiate Baseball League Championship this past ... 28 Jul 2022 by Drew Budd

After two exciting days of baseball, the Harbor Krakens have once again earned the honor ... 26 Jul 2022 by Staff Writer

The Hamptons Adult Hardball Championships are set — the Harbor Krakens will play the East ... 20 Jul 2022 by Staff Writer

As a kid growing up and playing baseball on Long Island, Freddy Forgione always heard ... 12 Jul 2022 by Drew Budd

The Sag Harbor-Bridgehampton Little League, by far the smallest league competing in the District 36 ... by Drew Budd

There will be some familiar faces returning to Sag Harbor this summer to lead the ... 30 May 2022 by Drew Budd
×