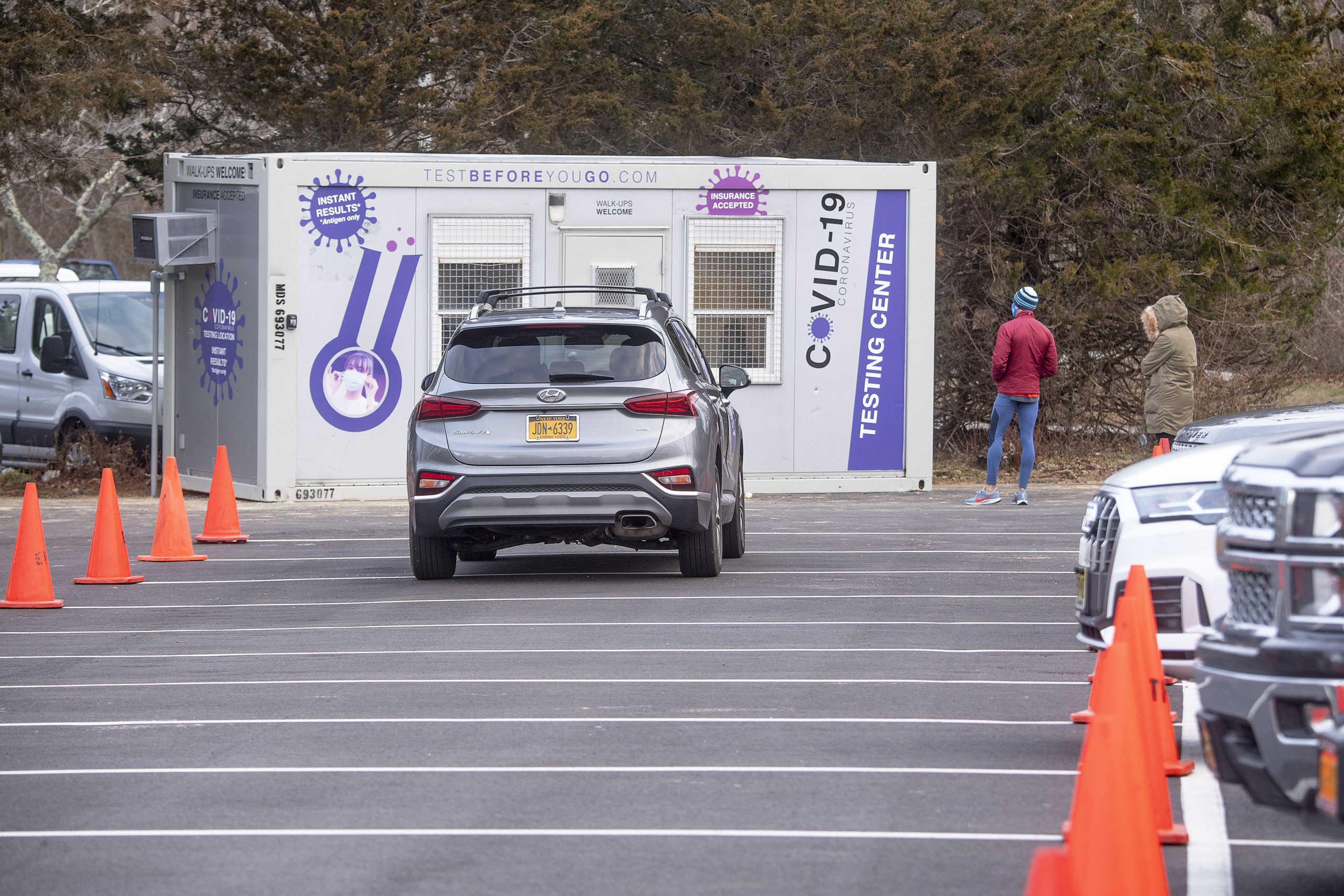 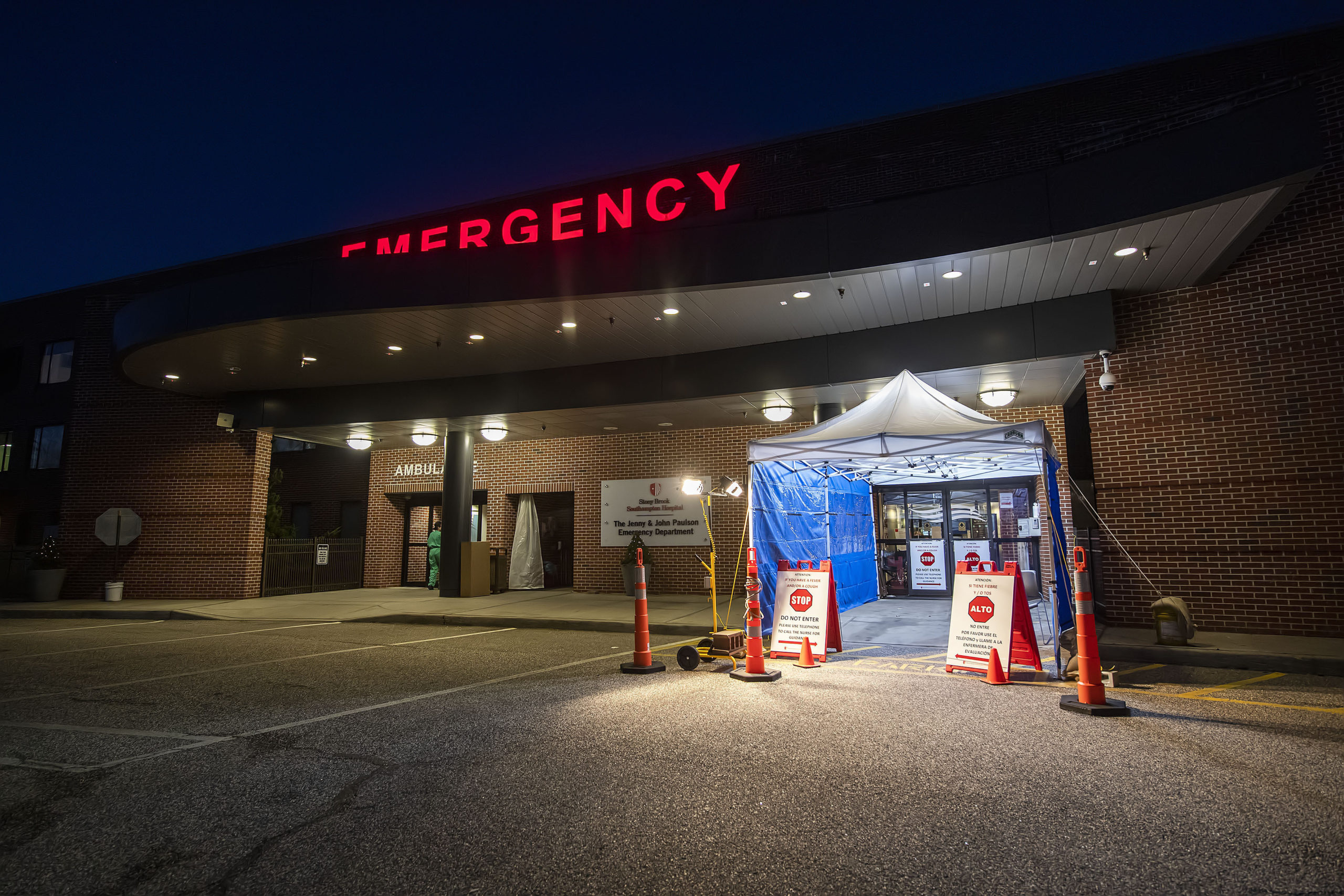 The exterior entrance of the Southampton Hospital Emergency Department as prepared for the COVID-19 pandemic on March 13, 2020. MICHAEL HELLER

More than 400 people have died of COVID-19 on the East End — including at least 140 in South Fork health care facilities — since the start of the pandemic, newly compiled data from the State Department of Health indicates.

The revamped State COVID website now tracks data about hospitalizations and the condition of patients from every hospital in the state, including up-to-date daily statistics about the number of COVID patients each is treating and a tally of open beds, ICU beds and how many patients are intubated.

It also recounts the tragedy of the last 22 months, tallying deaths by the day, and cumulatively dating back to the start of the pandemic.

As of Tuesday, 69 people have died of COVID at Stony Brook Southampton Hospital, the tally says — including three last week.

At least another 70 have died on the South Fork: 35 at the Hamptons Center for Nursing and Rehabilitation in Southampton, and 35 at the Westhampton Care Center. Both facilities were hit by outbreaks that took dozens of lives of elderly residents and patients in the first months of the pandemic, but have seen only isolated cases and deaths since.

Peconic Landing senior living facility on the North Fork has had 11 deaths — nine of which came in the earliest weeks of the pandemic, when the facility was hit by the East End’s first outbreak — and San Simeon By The Sound, which dodged COVID infections longer than any other local facility, has now had four residents die of the virus, according to the state.

Peconic Bay Medical Center has recorded 210 deaths since the start of the pandemic — 10 in the last 10 days. A certain number of fatalities may not have come from the local community, as the hospital was a receiving site for seriously ill patients from other Northwell Health network hospitals during the earlier surges in 2020 and early 2021.

There have been 29 deaths at the Peconic Bay Skilled Nursing Facility, the nursing home that PBMC operates on its Riverhead campus, which is where the hospital transferred may of its most seriously ill patients during the first wave of infections in 2020.

Likewise, Stony Brook Southampton had taken in some the most seriously ill COVID patients from Eastern Long Island Hospital in Greenport, which is also part of the Stony Brook Medicine network and has a smaller ICU unit. There have been 10 deaths at ELIH.

“Those hospitals were literally overrun, so Northwell did what they call load-balancing, to be able to provide proper levels of care,” Andrew Mitchell, the now-retired former CEO of Peconic Bay Medical Center, said of the Northwell facilities on western Long Island in May 2020. “What we saw during the event was virtually every ICU bed and a significant portion of the medical-surgical beds were all being used to treat a very large number of COVID patients. And we stayed like that for what felt like forever, those three or four weeks.”

As new infections and hospitalizations have shot up again this winter with the arrival of the omicron variant, the pace of fatalities nationally has lagged far below previous waves.

Vaccinations have helped with those improving outcomes, as has vastly improved treatments that have helped doctors and hospitals prevent COVID-positive patients from progressing to worst case and treating those with bad cases more effectively.

“The good news is that our treatments have proven to be good for the overwhelming number of patients, keeping them out of the ICU and needing ventilators — even the elderly,” Dr. Fredric Weinbaum, the chief medical officer at Stony Brook Southampton said last month.

But because the new variant is so contagious — testing positivity rates have been more than doubled this winter from what they were in previous waves — the number of hospitalizations from the virus are near all-time highs and death tolls continue to climb steadily, primarily among the elderly and those who are unvaccinated, even though the percentage of people who contract the virus and then get seriously ill is barely a fraction of what it was a year ago.

New York State reported 168 more deaths on Tuesday and Suffolk County reported a total of 17. There are more than 1,500 New Yorkers in intensive care units statewide with severe cases of COVID, 131 in Suffolk County.