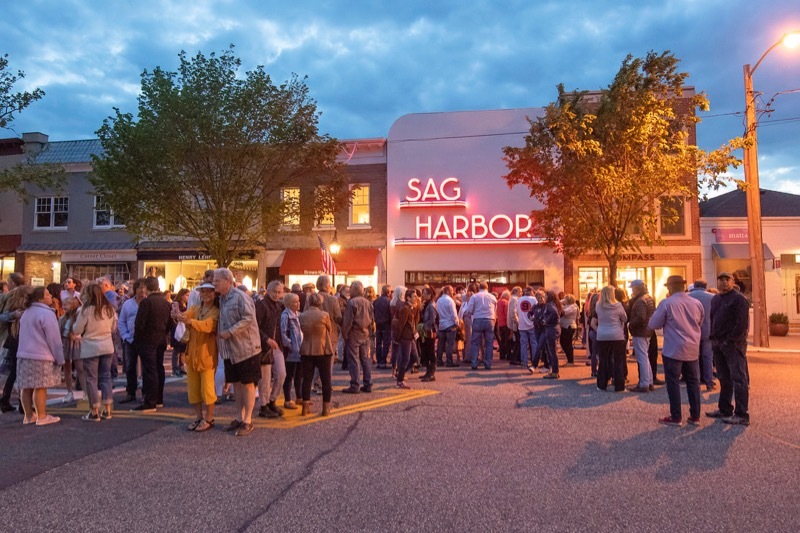 The Sag Harbor Cinema Arts Center has announced it will create a Community Relief Fund to aid with food insecurity and emergency relief on the East End. MICHAEL HELLER

Starting next month, the newly formed Sag Harbor Cinema Community Relief Fund will begin distributing the proceeds of a recent $250,000 donation gifted by an anonymous couple, to local organizations addressing food insecurity and emergency relief on the East End.

The first round of grants are expected to include Bridgehampton Child Care and Recreational Center, Children’s Museum of the East End, Eleanor Whitmore Early Childhood Center, Hampton’s Art Camp, Meals on Wheels – East Hampton and Montauk, and Organización Latino-Americana (OLA). The remainder will roll out over the next six months.

“In the spirit of the cinema, and the way rebuilding it has united the community, we joined together to form the Sag Harbor Cinema Community Relief Fund to help people in extreme need,” explained Cinema Chair April Gornik. “This community-grant segment of the larger gift allows us, in a combined effort, to provide urgently needed resources to people in need.”

The idea for the fund began with the anonymous donors, Ms. Gornik said, although the $250,000 grant is just one facet of a larger donation they are making to the rebuilding of the historic Sag Harbor Cinema building and its return to full operation — including completion of the construction and ongoing operations of film programs, as well as to “help begin the creation of a long-term endowment to secure our future,” she said.

“We are all feeling the stress and pressure of this horrible, challenging time and want to do as much as possible for those in need,” Ms. Gornik said, “and since the cinema has always been a ‘by the people, for the people’ kind of endeavor, it was a wonderful opportunity for us to give back without siphoning off already-designated funds.”

Ms. Gornik did not disclose the names of the couple who offered the initial relief funding — which is temporary and will not continue to function except at the discretion and hands-on participation of the donors who have provided it — nor the total amount of the donation.

“All other funds, which have been given to the cinema by other donors, large and small, will be used solely for the construction and operation of the theater as a cultural, entertainment and civic resource,” she said. “We’re thrilled to be a part of the effort to keep the community strong through this crisis.”

Despite the ongoing worldwide pandemic, the Sag Harbor Cinema is in the midst of seeking an executive director following the resignation of Gillian Gordon earlier this month.

“The COVID-19 crisis has put my priorities into perspective,” Ms. Gordon said in a prepared statement. “I felt that now is the right time for me to segue from administrative duties back to spending more time with my family and creative and educational pursuits.”

In the meantime, Artistic and Programming Director Giulia D’Agnolo Vallan will continue to lead the nonprofit forward, as it looks toward the future programming and educational opportunities it hopes to bring to the diverse local community.

“A search committee has been formed, and we will begin interviewing candidates as soon as possible,” Ms Gornik said of the search for a new executive director. “We are in solid shape financially, and are continuing to meet regularly, including our construction committee — even though work is now on hold. We don’t need more than a month to complete construction, we estimate, as soon as work can resume, although we will take every precaution to ensure workers’ safety.”

David Piacente, the executive chef at Gosman’s in Montauk, normally commands a crew of more ... 7 Jul 2020 by Alec Giufurta

About 150 people participated in a protest supporting Black Lives Matter in Montauk on Monday ... by Staff Writer

The new blacktop on Long Wharf was still so black that the hulking mass of ... 6 Jul 2020 by Stephen J. Kotz

Halle Kneeland is, undeniably, an inherently positive young woman. When the skies opened up, creating ... by Michelle Trauring

Ahead of July Fourth Weekend, Beachgoers Adjust To Pandemic Times

Summer season is in full swing, which means an influx of beachgoers to the East ... by Cayla Bamberger

A veteran chief of the Southampton Village Police Department, William Wilson was hired by Southampton ... by Joseph P. Shaw

When thousands of protesters against police violence and systemic racism took to the streets of ... 3 Jul 2020 by Alec Giufurta