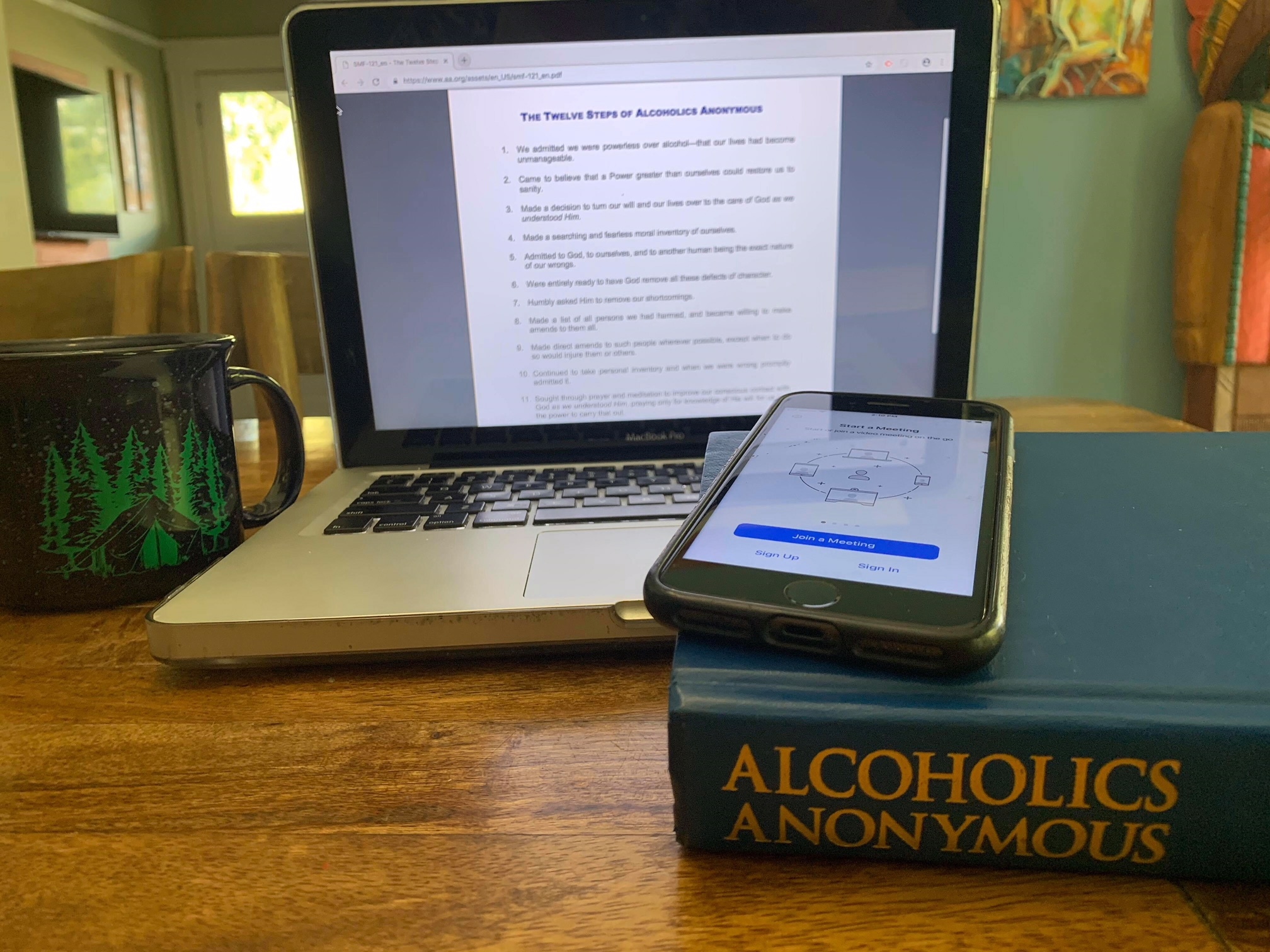 AA meetings can be found online and on social media. SHEA CURTIN 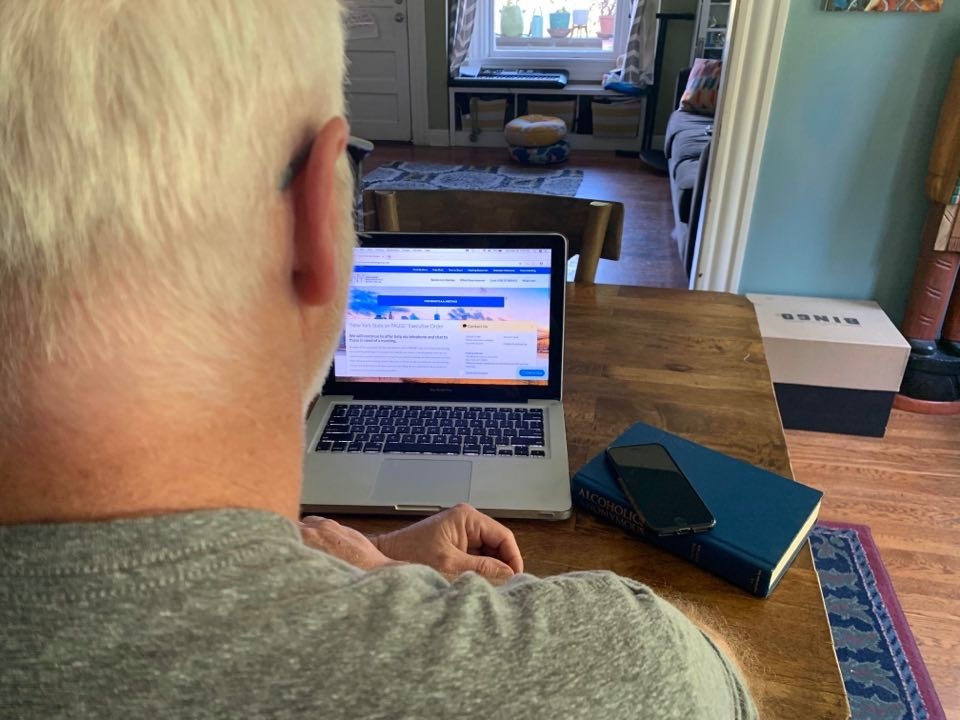 Members of Alcoholics Anonymous can turn to the internet to find virtual meetings. SHEA CURTIN

The only requirement for membership in Alcoholics Anonymous is a desire to stop drinking.

The self-help group’s preamble states, “Alcoholics Anonymous is a fellowship of men and women who share their experience, strength, and hope with each other that they may solve their common problem and help others to recover from alcoholism.”

Its foundation of 12 steps and 12 traditions focuses on rigorous self analysis and service, as well as maintaining anonymity. Meetings can end with “What you see here, what you hear here, when you leave here, let it stay here.”

AA’s 11th tradition calls for maintaining anonymity at the level of press, with a public relations policy based on “attraction rather than promotion.” Mr. B and Ms. A agreed to speak with us, with their anonymity intact, in order to tell readers how to find recovery in the new world of social distancing.

“This information needs to be out there so people can find us,” Mr. B. said.

“The strength of AA in this area is huge, ” Mr. B, who’s been sober for close to 12 years, said. “We’re lucky in Suffolk County that we do have a live person on the hotline.”

Those members working the hotline maintain a voluminous listing of members willing to take on newcomers and work with them. Call 631-669-1124 and the operator can connect you to someone to speak with.

“I learned to live in the 12 steps,” she said. “I have a sponsor. I am a sponsor and I have a home group and a commitment to meetings. The situation that’s happening now is a little disconcerting, but we are an adventurous lot, and if you’re into your recovery, you’ll do whatever you can to stay sober.”

While both speakers referenced group meetings that took place outdoors, mostly at beaches, before stricter quarantine measures were in place, they highlighted the use of online groups, whose popularity has, by necessity, burgeoned.

Describing himself as “old school,” Mr. B prefers phone calls and in-person meetings. He initially balked at trying online meetings but found, “It’s travel without the travel. It’s kind of fun.” He was in the service and stationed in many different locales. “It’s cool to find a meeting some place I was stationed.”

The organization’s Suffolk County website — suffolk-aa.org — lists both the hotline number and a link to online media.

There are also continuous Zoom meetings available, Ms. A. said.

“You have to seek out your recovery now and most people are doing that,” she said.

On social media groups, newcomers are posting and old timers are responding to them, she said.

“That’s the way it works, sharing your experience, strength, and hope,” she said.

Reaching out to another alcoholic is the most important part of recovery, Ms. A said. She suggests making an effort to call at least three other people in recovery every day.

Mr. B agrees. He sponsors four newer members and speaks with them daily. A senior member at an area “beginners group,” Mr. B said that when the PAUSE requirements went into effect and public meeting spaces closed down to groups, “I went there and I’m glad I did. Twelve or thirteen people pulled in to the parking lot and I directed them to what we were doing. We practiced social distancing and met at a local beach.”

With even meetings at local beaches officially banned, Mr. B. acknowledged, “It’s definitely hard … I was never a touchy-feely guy, but when you sit down with another alcoholic, it’s moving.”

One on one contact, sitting at a picnic table working on the steps with a sponsor is how he got sober, he said. Now, he will still meet with people in parking lots, stand by his car and talk. Mr. B spoke of taking a ride to the beach to watch the sunset, looking over and seeing another alcoholic.

“We ended up having a mini-meeting in the parking lot,” he said.

Katherine Mitchell is the owner of East End Counseling in Sag Harbor and a professor at Wurzweiler School of Social Work at Yeshiva University in New York. Her practice focuses on clients with substance abuse issues, and said she moved everything online once closures began. The core of her practice is clients mandated by the courts to undergo substance abuse treatment.

The online Zoom meetings are, she said, “kind of cool.” Old friends who’ve moved away can reconnect with local groups out here.

“That’s an unexpected blessing,” she said.

Identifying some form of positive in the current crisis is important, Ms. Mitchell said. She offered a personal positive she’s discovered. “My bad takeout habit has completely stopped,” she said. “We’re saving a ton of money cooking at home, and my son and I have had more meals together in the last two weeks than in the last year.”

“AA has a lot to teach us now,” she said, pointing to slogans such as “Stay in the Day,” “Keep your head where your feet are,” and “Keep it simple.”

The intergroup website makes it as easy as possible to find an online meeting, she emphasized. For people who are “low tech,” the isolation is forcing them out of their comfort zones, which can be seen as a positive, as new skills develop.

Taking control of one’s own environment and providing structure to one’s day are key when navigating a world that seems out of control, she said. It’s another AA precept, evidenced by “The Serenity Prayer,” which instructs, “God, grant me the serenity to accept the things I cannot change, the courage to change the things I can, and the wisdom to know the difference.”