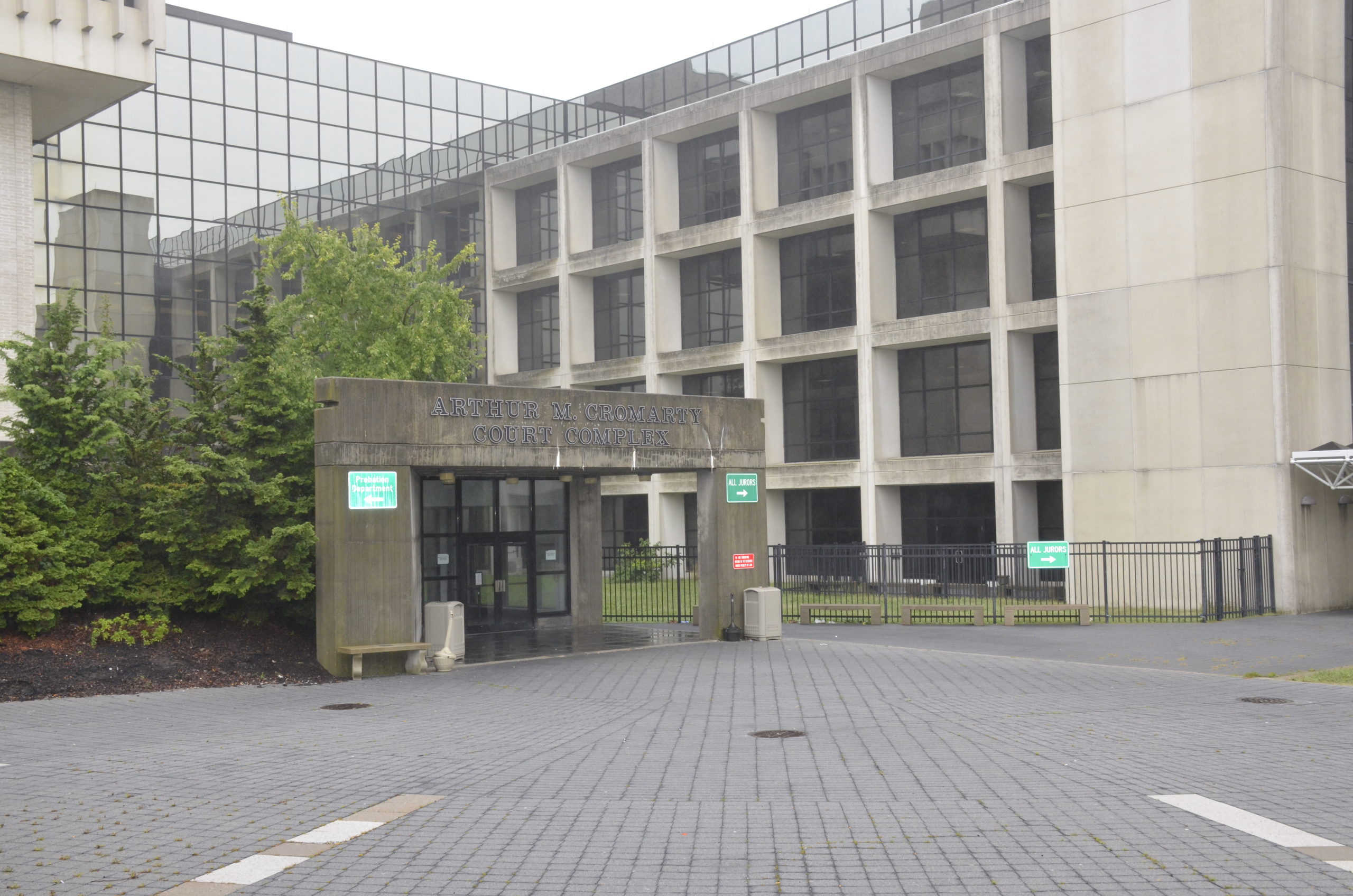 The Suffolk County Court in Riverside was closed due to the COVID-19 outbreak. GREG WEHNER 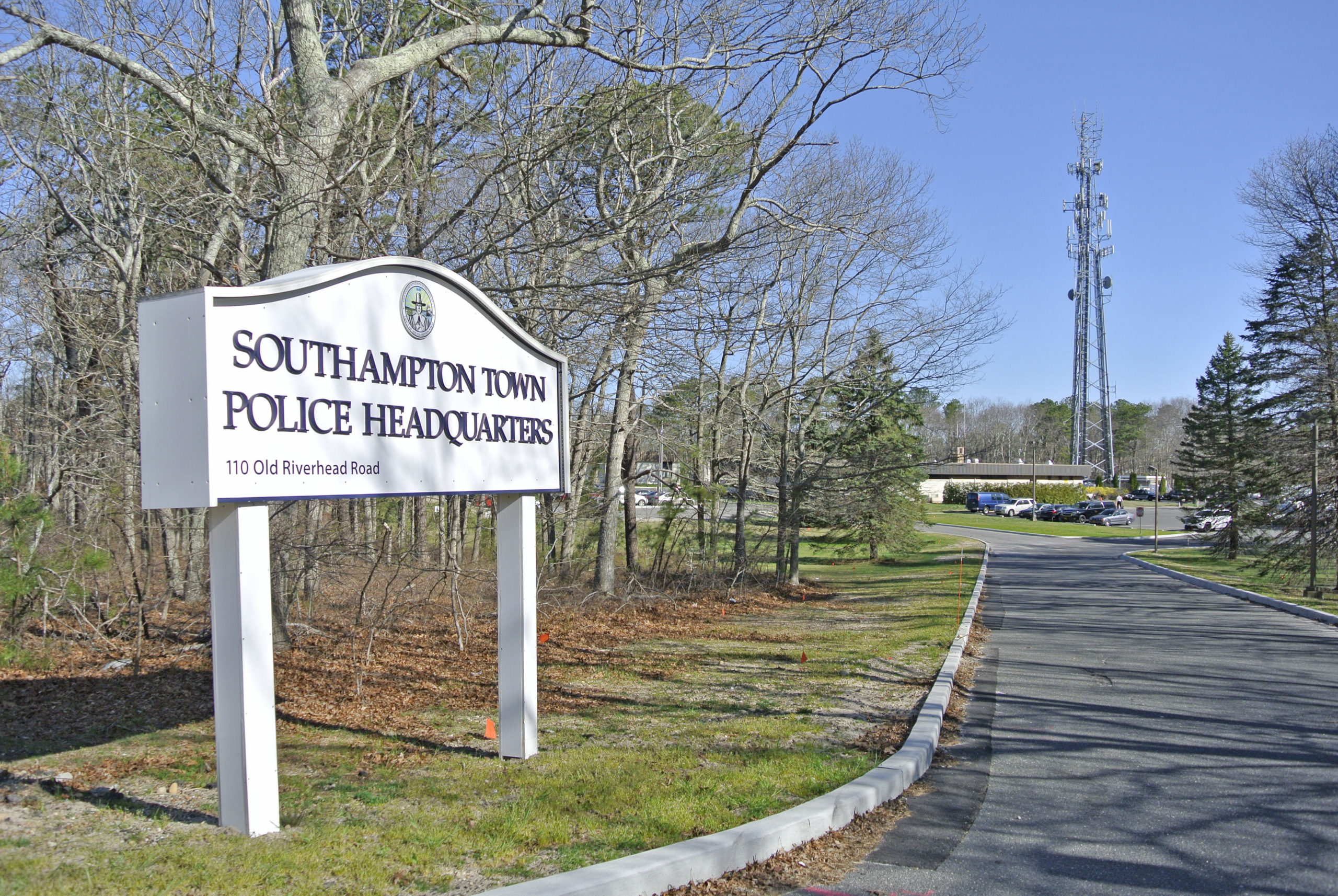 Several police departments on the East End are taking measures to protect officers and personnel, as well as the general public, in the wake of the COVID-19 pandemic.

Several police departments on the East End are taking additional measures to protect officers and personnel, as well as the general public, in the wake of the COVID-19 pandemic, including opening up the ability to file police reports over the telephone.

On Friday, March 27, during an East Hampton Town Board meeting, Town Police Chief Michael D. Sarlo said his department has been working with the court system to establish video arraignment procedures.

“The function of taking a person in to custody, who may be exposed or positive for COVID-19 creates a myriad of logistic issues for the department,” he said.

“Long term cleaning procedures, regular sanitizing of vehicles and buildings,as well as plan for decontamination of cells, vehicles, processing rooms, etc. in the event of confirmed exposure are ongoing,” he added.

Protocols for exposed officers, and getting them tested, isolated, and eventually returning to work are constantly evolving based on CDC guidelines, he noted.

Additionally, he said that the department has enacted protocols to take many reports over the phone, or “handle certain business” through email or the department’s website.

“We have strict guidelines for our officers to reduce exposure every chance possible,” he said. “We need to make sure we have enough personnel to continue to perform our every day emergency response and criminal investigative functions so we may continue to serve the community.”

“Given the size of our department, should we see similar rates as our community spread expands, we will have significant staffing problems,” he said. “There are back up plans in place for continuing operations with mutual aid to other local and state agencies to ensure adequate protection.”

In Southampton Town, Police Chief Steven Skrynecki said on March 27 that he wrote a new protocol for officers, directing them to have Personal Protective Equipment at hand at all times and to consider any time they close the 6 foot social distance gap as a potential risk.

For example, if an officer has to do a vehicle stop, they’ll ask a driver to just crack the window to speak and hold their license up against the glass to be checked. If the officer issues a ticket, he will pass it to the driver through the window.

“With the number of monitored people growing exponentially all across Long Island, we need to consider that anyone and everyone could be infected,” the chief said.

As he spoke Thursday, the chief was awaiting an “entire disinfecting” of the arrest processing area of police headquarters in Hampton Bays.

He reported the first arraignment under a new electronic system.

“That individual is medically suspected of the infection and we had to take great precautions,” he said.

The arrestee, a man from Flanders, was picked up for menacing with a knife inside a home he shared with another man. There was a request for an order of protection requiring court intervention. Lodged at headquarters Wednesday night, the suspect said he wasn’t feeling well, the chief reported. He was transported to the hospital.

“The hospital advised us to treat him as though he had coronavirus,” he said.

The man was treated and released from the hospital.

“He was arraigned as a contaminated individual,” the chief explained.

Two officers had to wear full protective gear during the teleconference. Following arraignment, the suspect was released “with restrictions” listed in the order of protection, the chief said. Normally, police release the names of suspects, but in this case, the chief said Health Insurance Portability and Accountability Act (HIPPA) rules protecting the privacy of medial records applied.

On March 24, the Southampton Town Police planned to implement telephone reporting, but only for certain non-emergency incidents — Town Police still plan to respond to emergency situations.

In a press release on March 23, Southampton Town Police said harassing communications, or situations where a person intentionally contacts a person electronically by phone or text to harass another person, can be reported over the phone, along with crimes involving lost property or vandalism.

But if the crime involves weapons, domestic violence, the threat of physical violence, or takes place at a school, is considered a hate crime or did not occur on Sunrise Highway, the police will not allow the report to be filed over the phone. Instead, officers will be dispatched to the scene.

Non-emergency reports can be filed by calling Southampton Town Police at 631-728-3400.

“Any resident who is feeling ill is requested to not respond to a precinct or police headquarters, and instead, call 911 and disclose all health concerns and symptoms to enable officers to prepare and protect themselves in the community,” a release from Suffolk County Police read on March 18. “Precincts will remain open 24 hours a day, 7 days a week, but the department is encouraging people to not visit precincts unless critically necessary.”

While Suffolk Police is opening up to online methods of police reporting, none of the police departments on the South Fork are following suit.

Westhampton Beach Village Police Chief Trevor Gonce said residents can call 631-288-3444, where the dispatcher will take complaints — the information will then be forwarded to an on-duty police officer who will follow up with the caller.

In East Hampton Village, Chief Michael Tracey said on Monday that residents can call headquarters to report crimes, but filing electronically through a website is not being offered. He said all of the departments are following the same protocol.

East Hampton Town Police Chief Michael Sarlo, who is the head of the East End Chiefs Association, did not immediately respond to questions regarding how his department is handling the situation.

While efforts are being made to protect the police officers on the South Fork from coming into contact with COVID-19, a Suffolk County Correction Officer who worked at the Riverside jail tested positive for the virus.

The officer last worked at the jail on March 14.

According to a press release from Sheriff Errol Toulon’s department, the correction officer “had limited contact with the inmate population.” The statement continued by saying, “All inmates are, and will continue to be closely monitored for signs and symptoms of illness.”

Suffolk County Legislator Bridget Fleming said on Monday that she spoke with Suffolk County District Attorney Timothy Sini last week, and that all courthouses are closed with the exception of Central Islip.

Ninety percent of the district attorney's staff, she said, is working remotely, and most arraignments were taking place online as of last week.

Two courtrooms in Central Islip remained open — one for felonies and one for misdemeanors.

Because of the coronoavirus, Ms. Fleming said Mr. Sini has asked for waivers regarding times associated with a speedy trial, grand jury indictments and the newly implemented discovery reform, which requires all evidence in connection to a charge to be filed within 15 days after an arraignment.

Those deadlines have been extended until April 19, she said.

Mr. Sini did not respond to questions this week regarding the situation with the courts and discovery reform.

“We know this is a challenging time for all — for our staff and families, but we are here to fully support them through this crisis, and, in the end, we will be a much stronger and resilient organization,” Sheriff Toulon said in the release.

With reporting by Kitty Merrill and Michael Wright.

‘Southampton In The Streets’ Resumes This Saturday

After a two-week trial, “Southampton in the Streets,” an effort to provide village businesses with ... 11 Jul 2020 by Stephen J. Kotz

Shinnecock Will Begin Work On Marijuana Dispensary Next Week, With Giant Cultivation Operation On The Horizon

The Shinnecock Nation expects to begin work again next week on its long-planned medical marijuana ... by Michael Wright

David Piacente, the executive chef at Gosman’s in Montauk, normally commands a crew of more ... 7 Jul 2020 by Alec Giufurta

Embracing Outdoor Dining In The Harbor

Across the Sag Harbor business district, restaurants, struggling to overcome from the upheaval caused by ... by Stephen J. Kotz

About 150 people participated in a protest supporting Black Lives Matter in Montauk on Monday ... by Staff Writer

It’s a song about how the things we thought we had for ourselves — secret ... by Bryan Boyhan

The new blacktop on Long Wharf was still so black that the hulking mass of ... 6 Jul 2020 by Stephen J. Kotz

The Center for Therapeutic Riding of the East End (CTREE), a nonprofit organization that offers ... by Nathalie Friedman