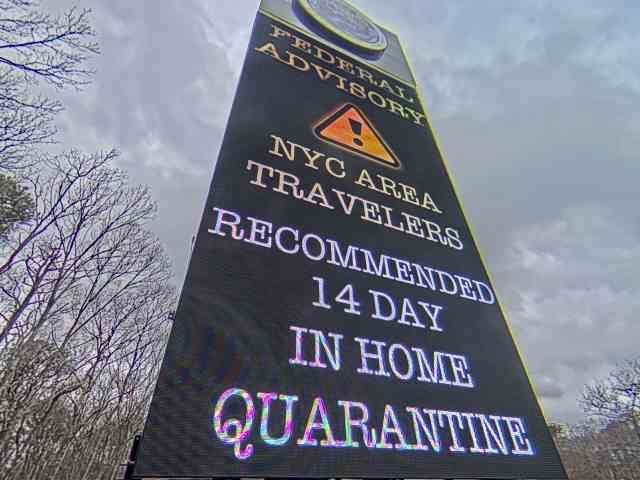 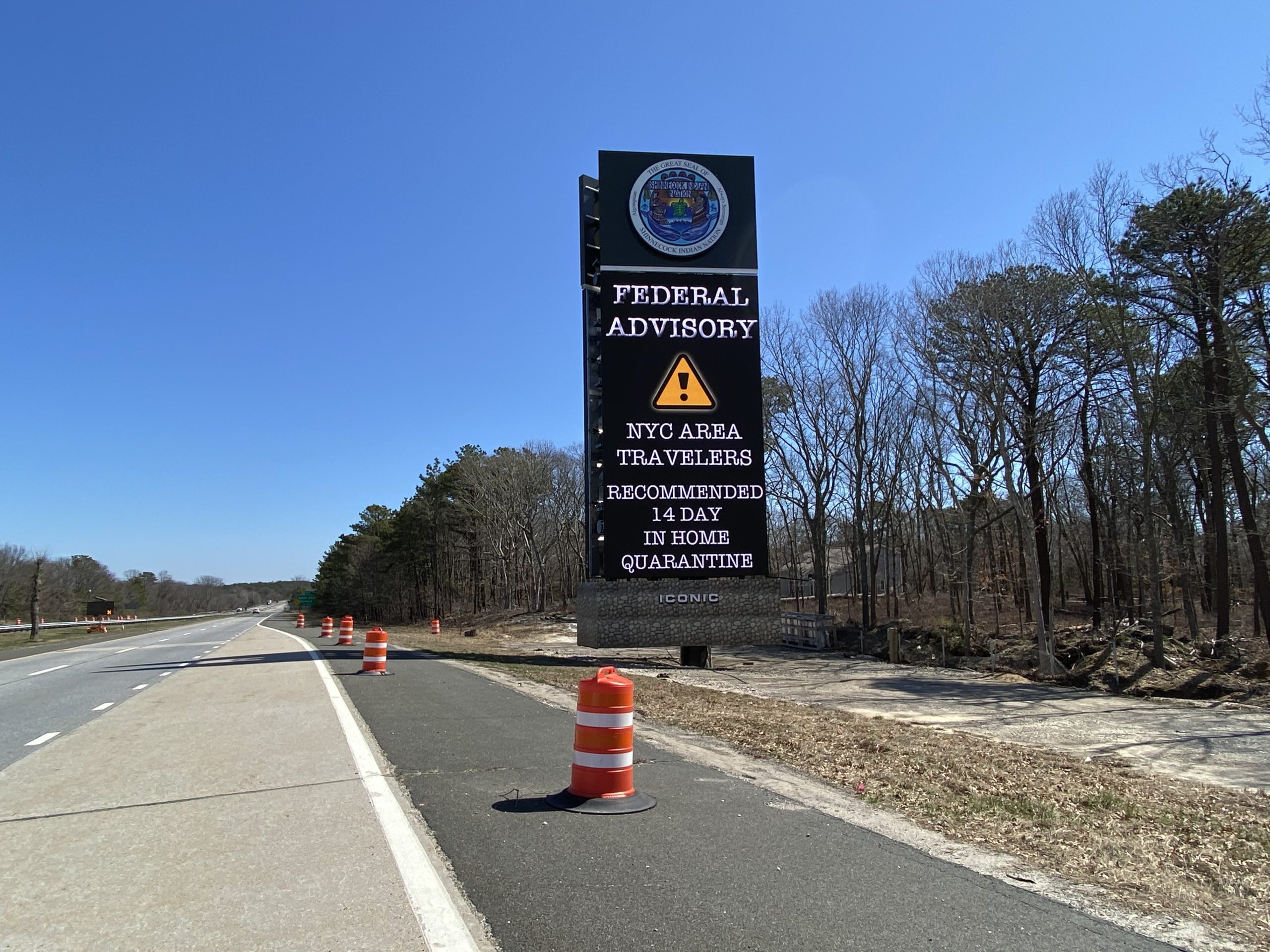 In the wake of an onslaught of summer residents heading to the East End, combined with the call from White House coronavirus coordinator Dr. Deborah Brix for people who had recently left New York City to self-quarantine for 14 days to staunch the spread of COVID-19, Southampton Town Supervisor Jay Schneiderman on Wednesday, March 25, revealed plans to ask Mr. Cuomo to consider enacting short-term limitations on non-essential travel from the New York Metropolitan area to the East End.

He polled other members of the East End Supervisors and Mayors Association, and by Thursday sent the missive, with the signatures of Supervisor Scott Russell of Southold and Riverhead Supervisor Yvette Aquiar. Members of the Shinnecock Nation signed the letter, as did the mayors of the villages of Westhampton Beach, Sagaponack, and North Haven.

“As leaders of East End Towns, Villages and Tribal Government, we are growing increasingly concerned with our local ability to manage the added strain to our local healthcare system, food markets and other essential businesses needed to maintain the health and safety of our residents,” the letter states, citing the surge in the local population as seasonal residents leave New York for summer homes.

The group petitioned for temporary limitations on non-essential travel from New York City to the area stating.

“The communities we represent are growing increasingly concerned by the sudden increase in our population and our lack of resources to address this growing demand,” the letter reads.

By Wednesday morning, April 1, they had not heard from state officials in response to the letter.

“I’m concerned about the rapid acceleration of the population and the stress it puts on the hospital and public safety,” Mr. Schneiderman said, explaining the nexus of the communique.

With cases of coronavirus increasing, he said, “I’m concerned about the hospital’s ability to handle not only the people who live here, but a whole bunch of people coming here.”

The supervisor said he keeps hearing from people who are concerned that the region “won’t be able to adequately protect everyone based on the limits of our infrastructure.”

“We’re not ready for a summertime population,” Mr. Schneiderman said. “I’m being told half the second homes are occupied. That’s a lot of people we would not expect in March. They’re getting out and about, and with that, there’s an increase in spread.”

For the last two weeks, social media sites have been flooded with angry posts by locals complaining about well-heeled city visitors cleaning out grocery store shelves and failing to follow edicts related to “social distancing” — only undertaking necessary errands and otherwise staying in homes.

Friday night, a photo of a beach party at Ditch Plains in Montauk accelerated ire. It pictures about 15 people around a fire , shoulder-to-shoulder, at a gathering replete with coolers, drinks, and even children.

“Idiots!” East Hampton Town Supervisor Peter Van Scoyoc exclaimed as he received a copy of the photo. “This is happening right now. I gotta send somebody down there.”

He later reported that the group was comprised of Montauk locals and police broke it up.

Local beaches, in particular, have seen a lack of compliance with quarantine and social distancing orders. In East Hampton Village, officials erected signs at beaches. They remind people to limit outdoor recreation to non-contact activities and to stay 6 feet apart. “Please do your part to keep everyone safe,” the signs read.

In Westhampton Beach, Police Chief Trevor Gonce reported on Monday that he had village beaches on Main Street removed to ensure better compliance with the social distancing mandate.

His patrols are combining enforcement and education.

“We’ve been proactive,” he said.

To concerns that the village might close its beaches, Mayor Maria Moore said via email on Saturday, “We are reluctant to close the beaches and parks, but if people continue to disregard the social distancing mandate, then we will have no choice but to do so.”

In Southampton Village, officials posted fliers asking people to help keep streets and beaches clean by disposing of trash properly. Social media posts abound lambasting people who use rubber gloves while shopping then just toss them on the ground after leaving stores.

In Sag Harbor, Mayor Kathleen Mulcahy asked listeners to her daily radio updates on WLNG to remember “We are one community.” She asked people who are out at second homes from Manhattan to refrain from traveling back and forth between the city and Sag Harbor.

Mr. Van Scoyoc didn’t sign on to the letter seeking a travel pause.

“It should be non-essential travel everywhere,” he said Friday night.

Speaking to the strain on infrastructure East Hampton undergoes every summer, he offered, “If I was in New York, I would stay there. If you get sick out here, where are you going to go?”

East Hampton Town Police echoed the concern in a social media post entreating those who had traveled from New York to follow the self-quarantine advisory.

“Be a good neighbor and responsible citizen, self-quarantine now. We only have Southampton Hospital to serve the entire South Fork,” the message stated.

The “trade parade” of workers rolling in to East Hampton unabated particularly disturbed Mr. Van Scoyoc. He, too, wrote the governor last week, and by March 27 was pleased with the results. State officials revised guidance related to non-essential activities in the construction industry. The latest directive lists only emergency repairs and work necessary to make a job site safe as “essential.” Jobs with only one worker on site may continue.

In his March 26 letter to Governor Cuomo and New York State Health Commissioner Howard Zucker, Mr. Van Scoyoc told the state officials that East Hampton residents have been alarmed to see activity continuing at construction sites despite a state order to refrain from gathering in groups, and in the face of recommendations by federal, state, county, and local officials that people should remain at home and away from others during the coronavirus pandemic.

Prior to Friday’s revision, County Executive Steve Bellone and County Legislator Bridget Fleming both acknowledged ambiguity in the guidance related to the construction industry. While workers may be able to maintain social distance on job sites, they can’t when driving two or three people in vehicles on the way to work.

A Winter Taste of Sag Harbor To Kick Off HarborFrost Weekend

Over the years, Sag Harbor has earned a reputation as a destination for foodies, with ... by Cailin Riley

Remember the hole in the ozone layer? Some smug anti-environmentalists have been known to cite the concern in the 1980s as an example of how science creates terrifying scenarios from time to time that get lots of media attention, only to forget about them when the next big thing comes along. Whatever happened to THAT, they laugh? Well, as it turns out, the scientists had it exactly right: In the mid-1980s, they found a dangerous thinning of the layer in the stratosphere that protects the Earth from harmful ultraviolet radiation from the sun, mostly caused by the use of chemicals ... 26 Jan 2023 by Editorial Board

Dune Road in Hampton Bays was closed Wednesday night from the Ponquogue Bridge in both directions through East Quogue due to flooding. Southampton Town Police announced the closure at 11:52 p.m. on Wednesday, January 25. As of 5:41 Thursday morning, it remained closed. According to the National Weather Service, rain is expected to clear Thursday with scattered showers continuing until about 7 a.m. The service reported a temperature of 52 degrees as of 5:50 a.m. It’s supposed to stay unseasonably balmy throughout the day, though temps may drop to the 40s, with a high of 46 predicted for Thursday. by Staff Writer

Southampton Police Reports for the Week of January 26

SOUTHAMPTON VILLAGE — Southampton Village Police deployed to a Hampton Road establishment on January 18 in response to a complaint regarding fraudulent purchases. The victim reported two men purchased two books and a Lego set totaling $1,520.74 using a stolen credit card. SOUTHAMPTON VILLAGE — Eddie Perry, 33, of Riverhead was arrested and charged with two counts of fourth-degree criminal mischief, a misdemeanor, on January 18. Southampton Village Police were called to a Pulaski Street residence where the caller reported damage to a front window and a suspicious vehicle in the driveway. The resident chased a man away who drove ... 25 Jan 2023 by Staff Writer

Southampton DWI Reports for the Week of January 26

Ernesto Ochoa-Tlapanco, 42, of Southampton faces a misdemeanor DWI count after a traffic stop on North Sea Road on January 18. He was initially stopped by Southampton Village Police for a lane violation, but the ensuing interview led to a DWI charge. Eddy Carreto Cardona, 32, of Hampton Bays faces a felony count of DWI. Quogue Village Police stopped him on Montauk Highway on January 15. They said his vehicle was swerving from across the double yellow lines to the shoulder. He failed roadside tests and was additionally charged with circumventing a court ordered interlock device, police said. Felony DWI ... by Staff Writer

A formation of jets that flew over Southampton on Tuesday, January 24, raised eyebrows, and ... by Kitty Merrill
×