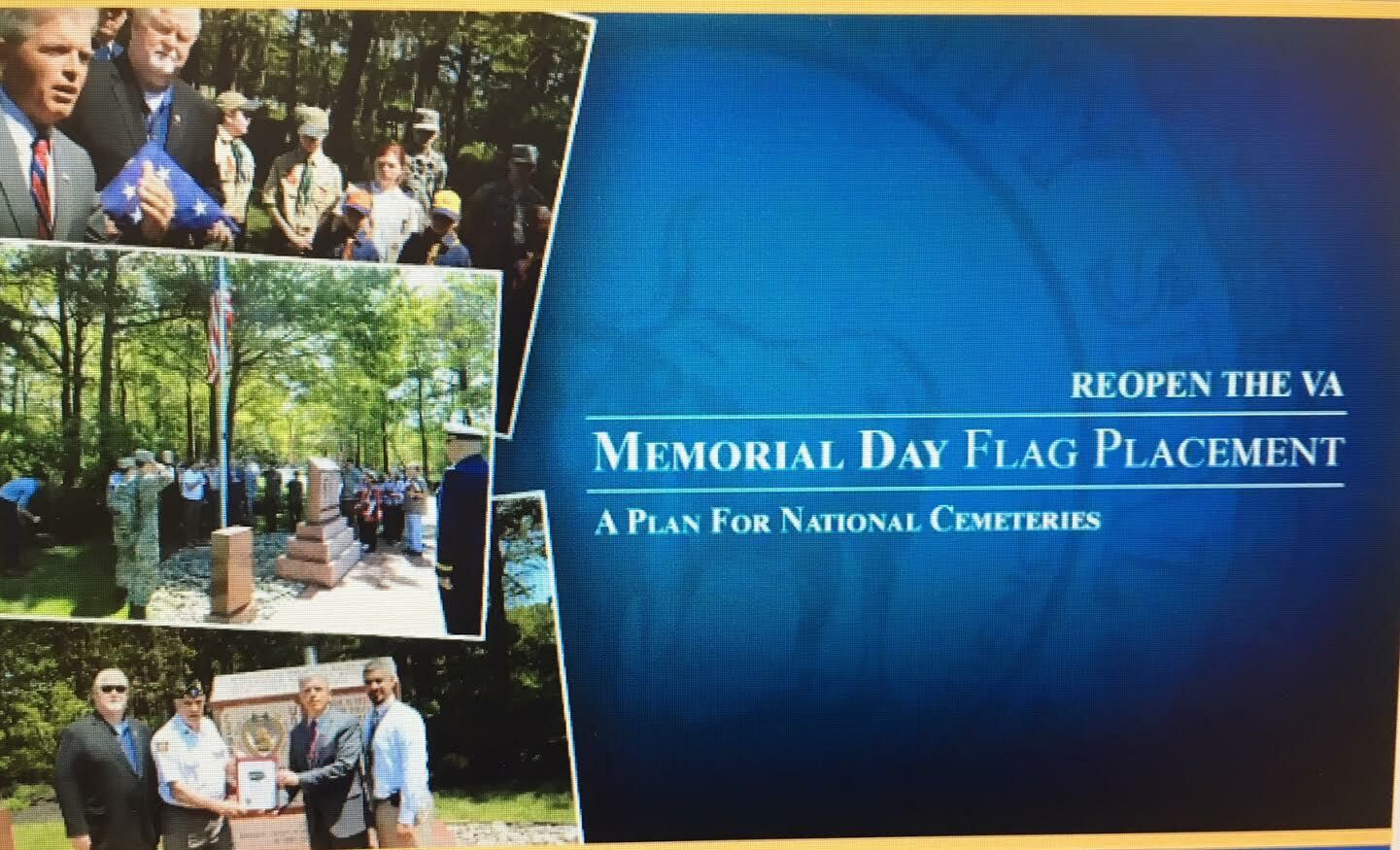 Suffolk County has crafted a plan for safe placement of flags at cemeteries. 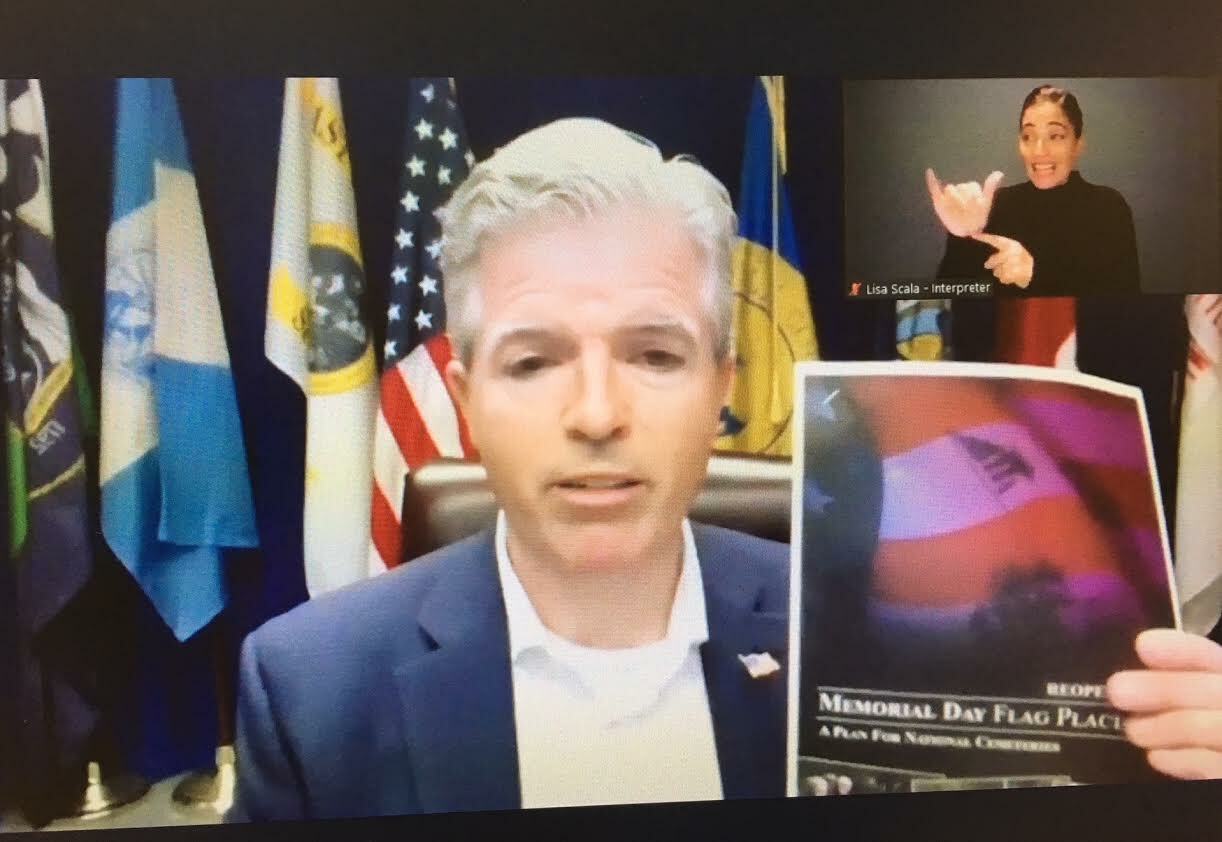 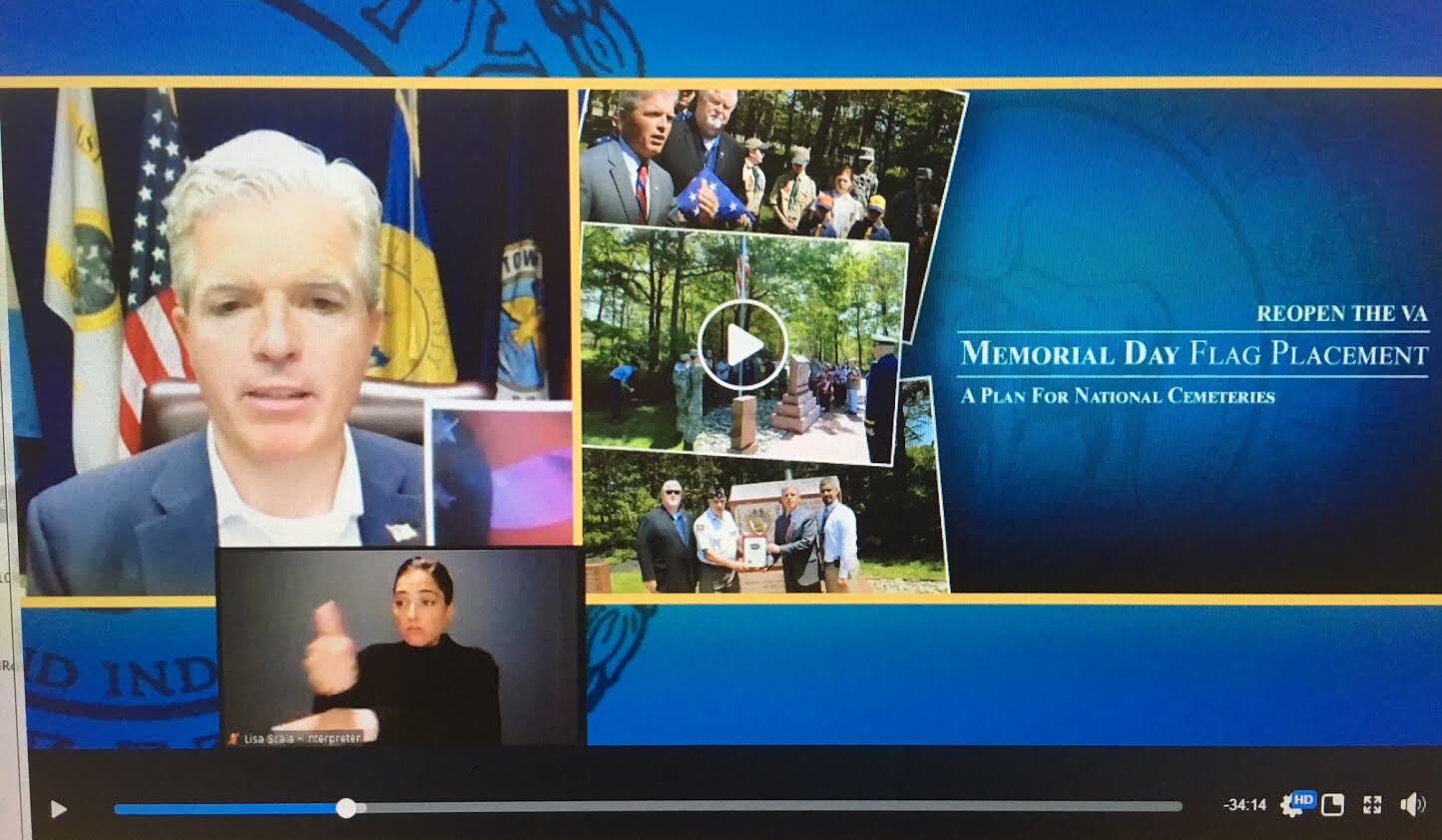 With beaches across the East End and select ocean beaches in Suffolk County set to open for Memorial Day weekend, County Executive Steve Bellone said the county was poised to try “to make things as normal as we can.”

Officials from various municipalities across the county have worked together to come up with plans for beach openings that are safe — and likewise, he would like to devise a plan for decorating the graves of veterans for Memorial Day.

He took note Tuesday of the holiday’s depiction as the unofficial beginning of summer. But, he reminded, Memorial Day is also a solemn holiday, created to honor the country’s fallen heroes.

The federal agency’s prohibition ought to recognize that some cemeteries and localities can come up with plans to decorate the graves while maintaining social distancing protocols, the county executive said during his daily media update Tuesday.

Suffolk County volunteers and officials have created a safety plan for the flag placement that was approved by Suffolk County Health Department Commissioner Dr. Gregson Pigott.

Calverton National Cemetery is almost 1,100 acres and “we could be 50 feet apart,” said Frank Bailey, who’s been coordinating volunteers for the annual Memorial Day tribute at Calverton that started in 1995. Mr. Bellone agreed.

Displaying the county’s certified plan, he said that, given its acreage, Calverton National Cemetery is “probably one of the easiest places in the world where we can socially distance.”

Over 200,000 veterans are interred at Calverton and, said Mr. Bailey, “Everybody in that cemetery is a hero.”

Last year, some 5,000 volunteers placed flags on 220,000 graves “in about 45 minutes,” Mr. Bailey said. The volunteers come from Scouting troops, as well as civic organizations, veterans groups, and businesses.

“It’s our job to once a year, go and say, ‘Thank you for preserving our freedom,’” Mr. Bailey said.

Lacking a greenlight from the federal agency, Mr. Bellone crafted a partnership with more than a dozen non-federal cemeteries across the county that will allow flag placement to occur on Saturday, May 23. On the South Fork, Sacred Heart of Jesus and Mary cemetery in Southampton and Shaarey Pardes Accabonac Grove Cemetery in East Hampton will participate.

The county executive called on community members to help with the effort by donating flags in good condition, measuring 8 by12 inches or 12 by 18 inches. They need about 7,000 of them brought to the H. Lee Dennison building in Hauppague by 5 p.m. on Thursday. Those reluctant to travel, but eager to donate may call 311 and pickup could be arranged.

The governor said Long Island is making great progress on COVID-19. He noted that just weeks ago an average of 100 Long Island residents were dying daily due to COVID-19, and on Tuesday the average was 13.

New York is starting a hospitalization visitation pilot program in 16 hospitals across the state to allow increased visitation by family members of patients. The two-week program will allow time-limited visits with personal protective equipment worn.

According to the state’s regional monitoring dashboard, Long Island has met five of the seven metrics required to reopen.

One of the outstanding metrics is recruiting 30 contract tracers per 100,000 residents. Tracers — who may be new hires or existing municipal employees — will interview people who have tested positive with COVID-19 to determine where they have been and who they have come into contact with, so others will know if they may have been exposed to the virus and self-quarantine.

The state says Long Island is “expected” to meet the required number of tracers. On Tuesday, Mr. Bellone affirmed the hiring and training of tracers was underway. He expressed confidence in the county’s meeting the metric.

What is holding back Long Island’s reopening now is meeting a 14-day decline in hospital deaths due to COVID-19. Long Island had just five days of decline as of Sunday. Alternatively, a region can meet the requirement if it has fewer than five hospital deaths per day, based on a three-day rolling average.

A “reset” to the May 15 initial end of New York PAUSE, announced by the governor on Monday, however, meant Long Island could begin working toward that number as of that date, rather than since the beginning of the PAUSE, and possibly reopen sooner than expected. Long Island meets or exceeds all other requirements.

Suffolk County saw its lowest number of fatalities since the pandemic began on Monday — 6 — but the number was back up to 18 on Tuesday. Since March, 1,772 people have died from COVID-19 in Suffolk County. As of Tuesday at 5 p.m., the county reported 38,327 confirmed cases across Suffolk, with 103 new on the day. Twenty-eight percent of those tested confirmed positive for coronavirus.

According to the county’s interactive map, as of 8 a.m. Wednesday, there were 986 confirmed cases in Southampton Town, and 272 cases in the Town of East Hampton, keeping in mind that cases are recorded by the state based on the ZIP code a patient offers as his or her primary residence.

By Sunday, the number of confirmed cases of an inflammatory disease possibly linked to COVID-19 and found among youth was up to 137. The illness presents like Kawasaki disease or toxic shock syndrome and causes inflammation of blood vessels.

Issued on March 7, the order “closed or otherwise restricted public or private businesses or places of public accommodation, and which required postponement or cancellation of all nonessential gatherings of individuals of any size for any reason (e.g. parties, celebrations, games, meetings or other social events).”

The order includes a provision permitting some regions of the state to commence Phase One reopening of “construction, agriculture, forestry, fishing and hunting, retail (limited to curbside or in-store pickup or drop off), manufacturing and wholesale trade.” However, Long Island is not included in the regions permitted to begin Phase One.

National EMS Week is May 17 to 23, and Mr. Bellone on Sunday noted that the H. Lee Dennison building in Hauppauge will be lit with blue lights to honor the emergency medical workers, for whom he expressed his appreciation.

“A big thank you to all members of our EMS community for the incredible work you have done throughout the COVID-19 crisis,” said Mr. Bellone. “You’re saving people’s lives each and every day.”