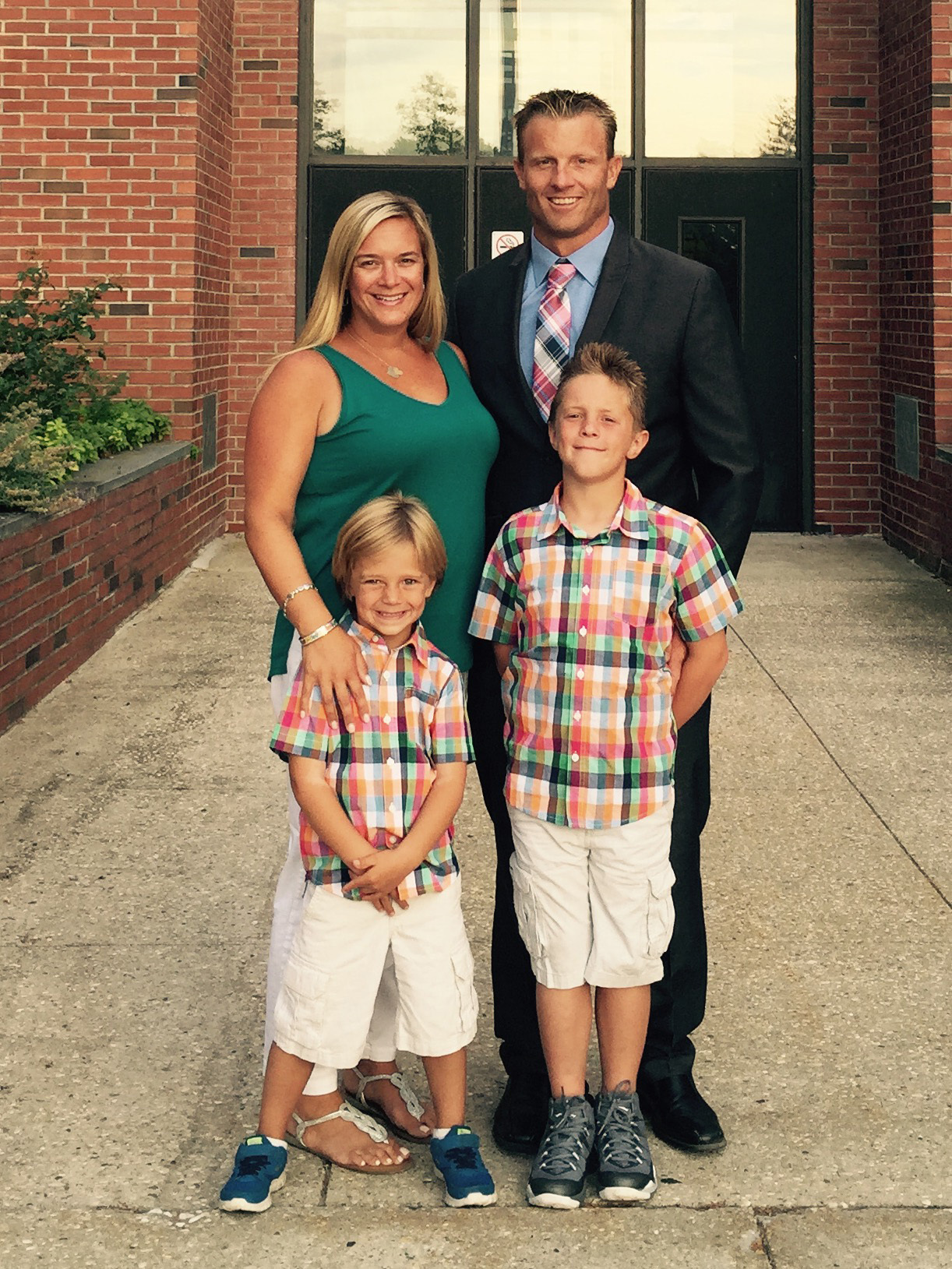 Eric Bramoff, top right, with his family when he took the athletic director position at Pierson in 2015. 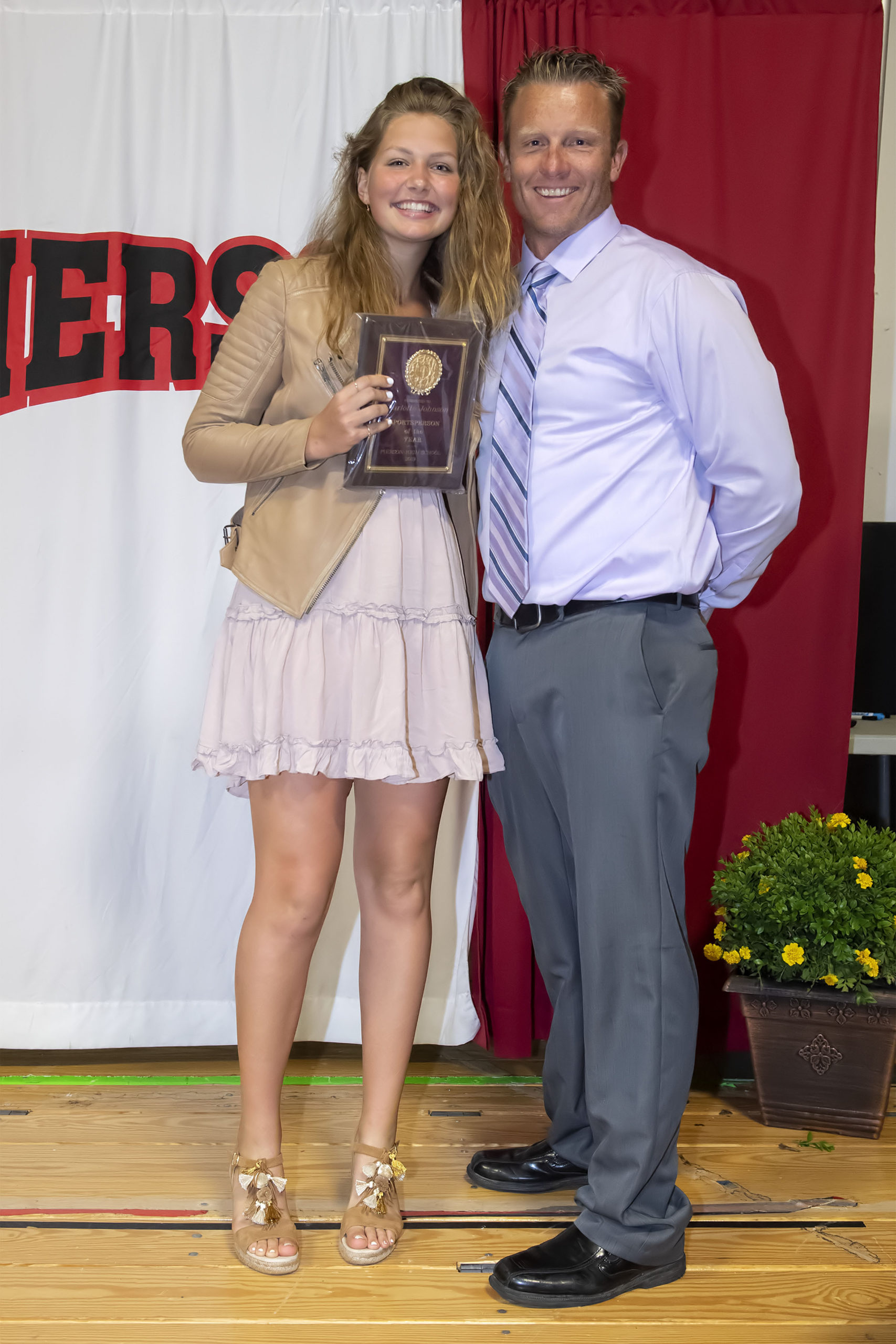 Pierson School District was one of the first to close amid the coronavirus outbreak on March 11, well before the county made the decision for all of its schools to do so. Pierson Athletic Director Eric Bramoff was tasked with deciding to cancel certain winter sports programs still being played, while also having to inform his spring athletes that their seasons would be delayed.

Bramoff, in his fourth year at Pierson, his alma mater from which he graduated in 1996, actually took his family upstate to the Syracuse area while school is out to take a timeout and relax — he took a 61-mile bike ride in 29-degree weather to curb his boredom — but he still took some time on Monday to talk to The Press about what it was like dealing with having to shut sports down last week.

Question: Pierson was one of the first schools to not only close, but end a lot of its athletic programs with concerns relating to the virus. What was the thinking behind that and what made the decision easy for your school as opposed to others who technically never closed until the county did so for them?

Eric Bramoff: I really wasn’t involved in making the decision. Our superintendent and [School] Board were working together very closely. I commend the board and I commend the administration for being as proactive as possible.

I knew we were going to have to cancel games, so I got to work on rescheduling them as soon as administration was looking to get ahead of this thing and close school. We went to rework the spring schedule, we were like two days into doing that and rescheduling essential league contests and work our way down, but that never materialized because the county came in and canceled all sports until April 3.

To be honest with you, we were one of the first schools to do the no handshake thing. We would still show up and show good sportsmanship, but it was more verbalizing it and it would no longer be a handshake, so we were trying to stay ahead of it as best we can. And then before anything got official, we just decided to end whatever winter sports were still going on so we’ve always been a little bit ahead of everyone, and that’s not gloating by any means.

I don’t know why we’ve stayed ahead of the curve, it’s not like we won something for doing so, I just think our board took the approach of let’s be overly cautious and if we’re wrong, great. But I also think there’s less bureaucracy in a smaller school, and that’s an opinion. My former employer, Syracuse City School District, has to consider a lot of other factors compared to us. Many of the kids within Syracuse rely on free and reduced lunch and meal programs, so maybe we were quicker to close because we do have resources here. We can’t close Syracuse schools when 20,000 kids are relying on certain things.

I think the administration and myself included have now gotten to the point where we want to return to as much normalcy as possible. We had the morning program for the elementary school this morning remotely, where all the fifth-graders to kindergarten go to see Mr. Malone, and it was great. And then what happened was my kids started their school day and they busted out an hour of work. It’s very early, but I think that our early action probably did some good and for that the board and the administration really need to be commended.

Q: During the spring season, aside from baseball and softball, you’re sending boys and girls lacrosse players, boys tennis players, and boys and girls track players to different schools. Being that you closed and ended athletics prior to the other schools being closed, how hard of a decision was it to close sports and affect those other schools/teams?

EB: I wouldn’t say it was negative feedback, but I think the other schools were shocked at the extreme measures we took so early. I had some people say to me, ‘C’mon Eric, you have to give us a little bit of time to catch up.’ I believe Section XI is one of the strongest administrations in the state. They don’t want to be first, they want to be right. If I had to forfeit games because we closed too early, I understood it.

But in one day, I had to tell a bunch of 16- and 17-year-old lacrosse players they wouldn’t be playing the first few weeks of the season. They were receptive to the wishes of the district even though that wasn’t what they wanted to hear.

Q: What’s your biggest concern as your athletes go off on their own to try to stay in shape and be ready for what hopes to be a spring season?

EB: My biggest concern is that most athletes are creatures of habit. When that gets disrupted, it can have not just a physical impact but a mental one as well. They’re preparing, but they don’t know what they’re preparing for.

When, not if, but when all sports do start back up, I think we’ll have a deeper appreciation for those things because they’ve never been taken away from us on such a large scale. So when we get out on the baseball field, whenever it is, whether it’s this spring or next, we’ll all really appreciate what it is we have. My baseball team and softball team were demanding to practice. I had to give them the news that we can’t have an organized practice and I hope they all utilize this time to better themselves.

Q: Was that your message to your coaches and players? That they have to be prepared that there will be a spring season?

This is similar to September 11, the difference between then and now is that we knew as soon as we were ready we were going to use sports to heal. We don’t know when we’re going to be able to get back on the field, and I don’t want to promise these spring athletes that there is going to be a spring. But I do know that we are preparing at the section level to at one point get a green light. My biggest concern is for the baseball pitcher or anybody with arm maintenance. You have to throw your bullpens, work the small muscles, stay flexible. When we come back it’ll probably be a rushed season, with doubleheaders and four games a week, so if you don’t do that it’s a concern.

I want the Pierson athletes to know you got to do this stuff on your own. You have to keep the body sharp, whether that’s going out and shooting your lacrosse ball, or hitting in the cage and throwing with your parents. That’s going to be key when we return to normalcy, so they have to design a process and just stick to it and just keep going.

Q: What is the plan moving forward?

EB: They’ve got to utilize the people within their circle, whatever circle they decide to stay tight with during this time.

Fishing is back. With the phase one reopening expected for Long Island this week (hold ... 26 May 2020 by MIKE WRIGHT

Golf Can Be A Welcome Distraction During COVID-19 Quarantine

While Long Island is still shut down from the NY Pause order, one important aspect ... 19 May 2020 by Gabriela Carroll

This week’s warm, sunny weather fast-tracked leaf-out and blooming for many plants that seemed to ... by Staff Writer

Tennis Enthusiasts Thrilled As Restrictions Are Lifted At Local Clubs

As New York State began to lift restrictions as the NY Pause order expired in ... 18 May 2020 by Kyle McKee

May Snow Flakes And Slow Fluking

Well, for all the moaning we have all done in the last several years about ... 13 May 2020 by MIKE WRIGHT

School closings devastated high school seniors, who lost out on final moments with their friends, ... 11 May 2020 by Gabriela Carroll

For Senior Athletes, The Year Comes To An Unceremonious End

After an unseasonably cool April, whose mean temperature was 2 degrees below “normal value” for ... 5 May 2020 by Staff Writer

On Friday night, high schools on the East End hosted parades as a tribute to ... 4 May 2020 by Staff Writer

The Hamptons Collegiate Baseball League (HCBL), which was busy preparing for its 13th season when ... by Gavin Menu
Sign in to comment