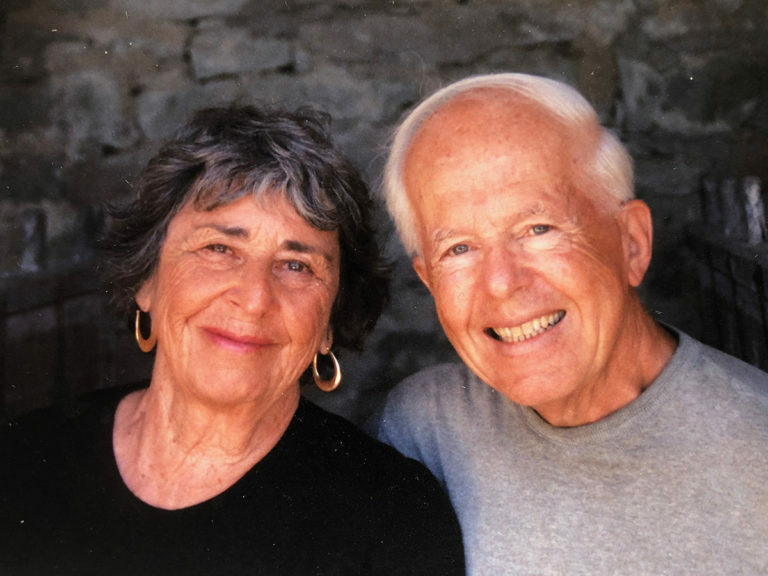 Joan (Powers) Porco and her husband Edward during a trip to Cortona, Italy.

It was hardly a promising beginning for a relationship when Edward and Joan (Powers) Porco met for the first time at a New Year’s Eve party in 1959. Edward, a Republican at the time, and Joan, a political activist Democrat with liberal leanings, argued about interracial housing.

It didn’t sound like it was love at first sight, but romance evolved many years later and love eventually found its way.

Eighteen years after that initial meeting, the couple was married.

“It was a big surprise to everybody,” said Julia Chachere, Joan’s daughter. “It is remarkable. Their relationship was just an unexpected relationship. It was a love story.”

Mutual respect helped keep that marriage healthy until earlier this month when the two residents of Peconic Landing in Greenport died within four days of each other, victims of COVID-19. They are among eight Peconic Landing deaths attributed to coronavirus. Edward died on March 24 and Joan died Saturday. He was 89 years old and she was 90.

“Our one solace is that they didn’t know of each other’s death,” said Ms. Chachere, a nurse practitioner who works in Cutchogue and lives in Sag Harbor. “That was a small blessing.”

Edward was a commodities broker who later returned to graduate school and earned a master’s degree in liberal arts from the New School for Social Research in New York City at the age of 59. Joan was a journalist, teacher, social worker, gestalt psychotherapist, poet and author. They both retired around 1997.

Both were previously married and they helped each other through their divorces, said Ms. Chachere.

And what about those earlier political differences? Was it a case of opposites attract?

“I don’t know if it was that because they weren’t opposite in every way,” Ms. Chachere said, “but I think at their core, they were like soul partners.”

Their shared passions included classical music, hiking, traveling and political activism. And, over time, Joan apparently swayed Edward over to her side of the political aisle. Edward alluded to that in a 2016 interview with Patch, saying, “We’ve eliminated a lot of discussion just being on the right side of politics.”

Before that happened, though, Ms. Chachere received a phone call one day from her stepfather. As she recalled, it went like this:

Edward: “Your mother wouldn’t talk to me.”

Ms. Chachere: “What have you done?”

Edward: “I told her I was going to vote for Bush Sr.”

The Porcos lived in Montauk for 46 years before moving to Peconic Landing in 2013. Montauk held a special place in their hearts.

Edward championed preservation and environmental conservation in Montauk. He was a longtime board member and past president of Concerned Citizens of Montauk and served two terms as president of East Hampton Trails Preservation Society. He led hiking trips to other countries.

Joan was on the Concerned Citizens of Montauk Community Relations Committee.

They named their Montauk house Gaudeamus, which in Latin means “may we rejoice.”

“They both got a tremendous amount of joy out of their lives,” Ms. Chachere said. “They shared a sense of celebration of life to all the things they did.”

Ms. Chachere said Edward started getting ill on March 14 or 15, shortly after her mother had developed a fever. “It was pretty clear to me that this was most likely COVID-19,” she said.

On March 17, she drove him to Peconic Bay Primary Medical Center in Mattituck to have him tested.

On March 23, she said, he was first brought to Stony Brook Eastern Long Island Hospital in Greenport before being transported to Stony Brook Southampton Hospital.

Ms. Chachere said she visited her mother three times at Stony Brook ELIH before being convinced to stop visiting out of concern for her own health.

“It’s very excruciating not to be able to hold the hand of your loved ones while they’re dying,” she said.

Joan wrote a poem for Edward in 1979, titled, “To Edward, In Celebration.” It read: “We are so different, you and I; But there is that part of us; Where the I and the Thou can meet; And by this convergence; Provide the manna; To feed our unique selves.”

This article originally appeared on The Suffolk Times website and is reprinted with permission.