Plaza Cafe Is At A Crossroads Due To COVID-19 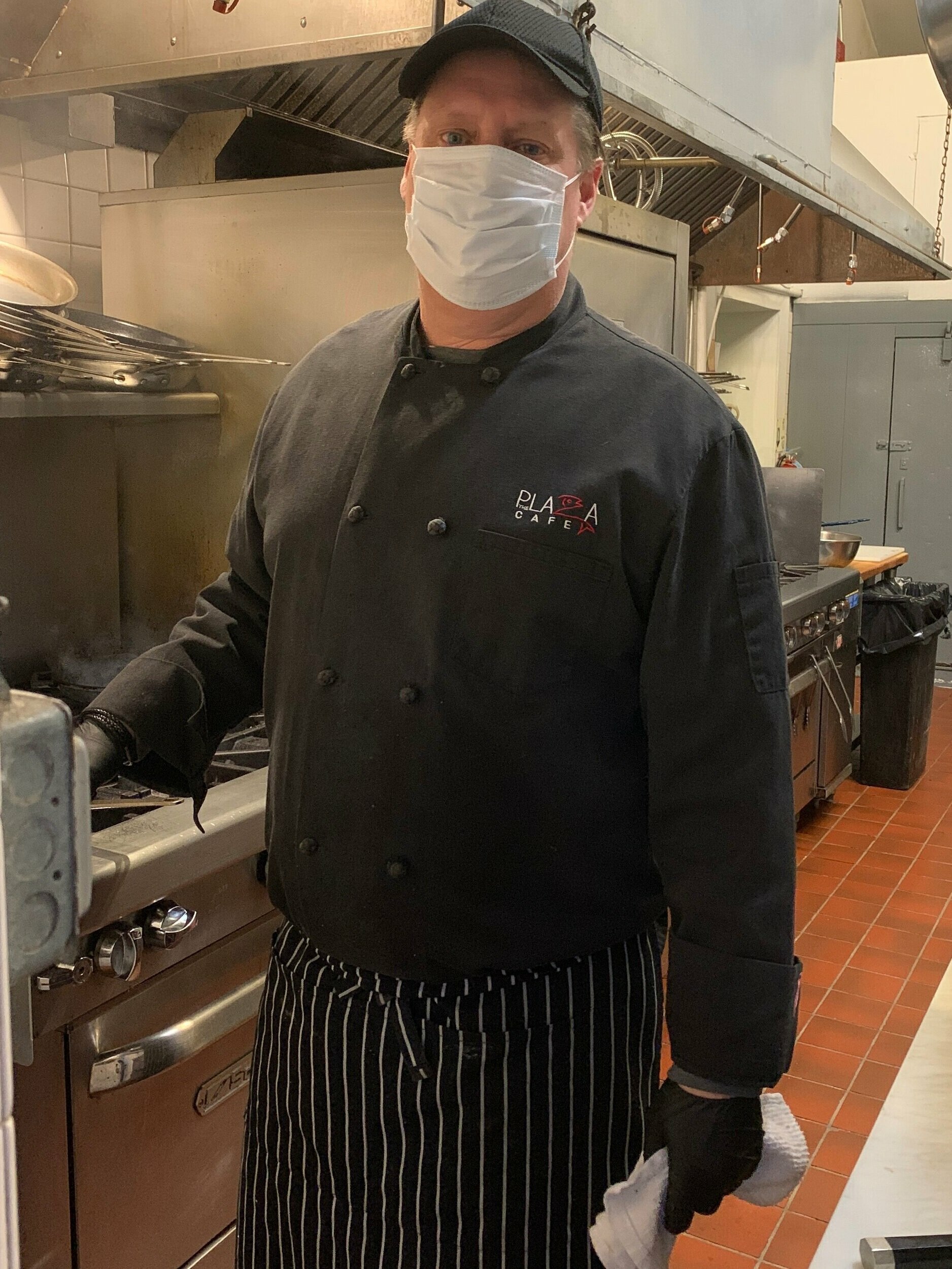 Doug Dulija, chef and owner of The Plaza Cafe in Southampton, suited up for a day in the kitchen.

Doug Gulija has never had two consecutive days off in his 40-year career. He had never been home before 8 p.m. on a work night.

And now, in the face of the COVID-19 pandemic, he finally sees what he’s been missing.

“For me, personally, it’s been a time of reflection,” explained the chef and owner of The Plaza Café in Southampton Village, back in the kitchen after a day off spent relaxing in his backyard, reconnecting with his family. “It’s opened my eyes to even, if we do open up again, I may, for the first time in my career, say, ‘Nope, I’m closing two days a week.’

“I go seven days a week from the middle of April to the middle of September, and I’m here every single day, and I have been for 25 years — and I love it,” he continued. “It wasn’t mandated to me. I didn’t hate it. I just love what I do.

“But now I’m seeing, just hanging out in my yard with my dog and my kid, it’s, like, ‘Whoa. Let me reevaluate: Do I need to be doing what I’m doing?’”

Abiding by the state’s stay-at-home order, Mr. Gulija closed his dining room in March and transitioned the restaurant to takeout only, adding a food truck menu to the normal high-end fare.

“Everything in this is like nothing I’ve ever encountered in my 40 years in the industry, where you had some idea of where things might be six months to a year later. You have no idea where this is going,” he said. “Some people say it’s the end of the world — this is it. Other people are like, ‘It doesn’t exist.’

“We’re so divided on it. So how do you make a business plan on that? It’s crazy. It’s hard to plan for a future when we don’t even know what’s gonna happen tomorrow.”

To prepare for a potential reopening, Mr. Gulija and his two staff members — whom he pays through the Paycheck Protection Program, as well as his rent — have moved the restaurant’s tables 6 feet apart, a social distancing measure that slashed seating from 80 to 30.

“In all honesty, if that works and people are safe, because I’m a small chef-owned restaurant, I can survive doing that. But there’s definitely a chance we won’t get through it,” Mr. Gulija said. “When the PPP thing runs out, which for me will be in five weeks, and we’re still in just takeout, my gut feeling is that we’ll probably close, unless it’s safe and I can at least start doing some dining room business. Even if it’s 20 people a night, I can survive. But if I closed? Yeah, I would probably say that would be it.”

As part of Governor Andrew Cuomo’s plan to reopen New York State, restaurants are in “phase three,” behind construction and real estate services, though the actual date still remains unclear.

“There’s gonna be places that, once the okay is put up, they’re gonna open up and act like nothing’s out there, and I, unfortunately — because of my personal life and people that I’m taking care of — I see this in a different light,” he said. “So that’s gonna be the hard part for me, as to when I can actually say it’s safe to open and actually start trying to make a living.”

At home, Mr. Gulija cares for his son, who is diabetic, and his two elderly parents — three loved ones who would all be considered high-risk COVID-19 patients should they contract the virus. It is a reality the restaurateur grapples with every day, he said.

“I do the best I can, and I’ll take their health over my business, no question,” he said. “If somebody walked up to me and said, ‘Hey, your mom and dad and your son are gonna survive this, but you’re gonna lose The Plaza Café,” I’d say, ‘Tell me where to sign.’ I’d be cool with it.

“That’s the way I look at it. That’s how I get through this.”

Mortgage interest rates have been low for four or five years now, but since the ... by Brendan J. OReilly

Back in 2017 when David Churchill bought DePetris Wines and Liquors in Bridgehampton and moved ... by Annette Hinkle
×