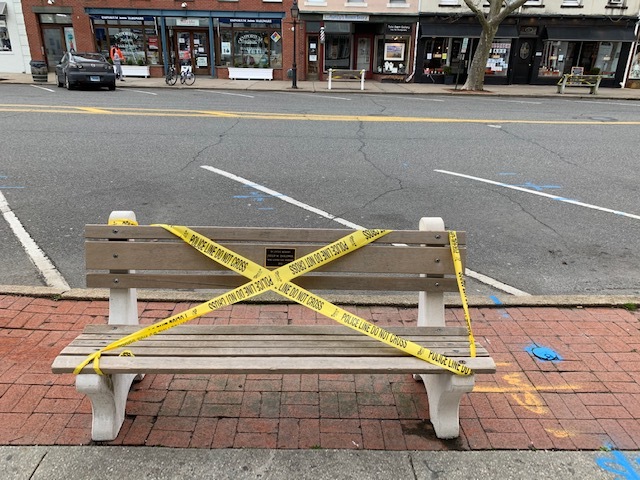 Police in Sag Harbor Village taped off benches in an effort to get people to comply with New York PAUSE. COURTESY SHPD

Ten days ago, Governor Andrew Cuomo, irked at the lack of adherence to his New York PAUSE executive order mandating social distancing, announced that he increased the fine for failure to comply from $500 to $1,000.

He didn’t issue a specific order raising the fine, nor mention exactly what type of charge or violation the fine might be attached to during his April 6 update. He merely said each locality has the authority to enforce the PAUSE protocols.

At the outset of the mandatory shutdown, during a March 24 media update, Suffolk County Police Commissioner Geraldine Hart listed a variety of criminal charges a non-compliant person could face. They run the gamut from first-degree criminal nuisance, which is a felony, to disorderly conduct, a violation. Unlawful assembly, a misdemeanor, also could be charged if people violate the order banning gathering in groups. Obstructing governmental administration in the first degree, a felony, was another potential criminal charge on the commissioner’s list.

Asked to articulate which offense the $1,000 fine relates to, this week Suffolk County Police Chief Stuart Cameron said he believed the fine is an escalation of the $500 fine imposed for violations of New York State Public Health Law.

To ensure the safety of police officers, the non-compliant individual would be issued an appearance ticket on the spot, rather than be brought to police headquarters for processing.

There is some confusion as to exactly which violation the governor was referring to in his press conference, East Hampton Town Police Chief Michael Sarlo said on Thursday.

“We have sought legal advice and written clarity from Albany,” he said. “None of the available violation sections, which Albany has sent down as guidance for local law enforcement seem to specifically match up with individuals not complying with social distancing.”

East End chiefs, along with Suffolk County and New York State police, have continued to be proactive and seeking compliance with regards to social distancing, Chief Sarlo continued.

“We have all been working with our code and building departments to ensure businesses are complying,” he said. “Most of the violations available to law enforcement focus on the business entity failing to comply. Across the board, we have all experienced a great deal of cooperation and compliance.

“We have had no interactions wherein people have refused our requests or openly disobeyed our directives under the PAUSE order,” he contiued. “We certainly wouldn’t want to take someone into custody, process them on a custodial arrest creating more contact with our officers, in our vehicles and buildings, risking further exposure and community spread.”

Still, if presented with an uncooperative or defiant violator, the chief assured police would do what was necessary.

“Compliance and cooperation have been the goal,” he said, “and we have had tremendous success in that regard.”

In East Hampton, most of the calls about gatherings turn out to be unfounded. Of course there are a few exceptions, the chief said, “but on the whole most people get it.”

Should a group of people refuse to comply, individuals can be issued a field appearance ticket, for disorderly conduct, a penal law violation. Continued failure to comply could result in custodial arrest for criminal nuisance in the second degree, a misdemeanor. Both situations would use the conditions set forth in the governor’s PAUSE order as underlying support for the charge, the chief explained.

The East End departments all report a very high level of compliance, and very few to almost non-existent refusal to follow an officer’s directions, according to Chief Sarlo.

The chief noted that Montauk was busy last weekend, the busiest areas were the State Parks. Several complaints came in regarding social distancing violations, along with some video, he said, “and it was entirely in Camp Hero and at the Lighthouse.”

Extra proactive patrols, two additional officers and two additional marine patrol officers on overtime were assigned specifically to the beaches for the entire weekend to focus on social distancing.

“We saw some volume, and cars parked, but officers did not report social distancing violations or see any ‘group’ gatherings,” the chief reported.

Several complaints regarding groups turn out to be an extended family, where you have the grandparents, parents and two or three kids and the dog.

“So it looks like a group, but the seven people are all from the same household,” Chief Sarlo said.

In Sag Harbor Village, Chief Austin J. McGuire reported that at the outset of the crisis, he took officers off foot patrol for their safety. But as more and more people arrived and wandered Main Street, even getting takeout meals and drinks from downtown restaurants and “having picnics,” he said he returned foot patrols.

In fact, the chief directed an officer to use yellow crime scene tape to tape off the benches along Main Street to discourage from using them. By the time the officer finished the bench at one end of Main Street, there were already two young women sitting atop the tape at the other end.

Still, the chief said the first action was education and warnings. Signs were posted “telling people the obvious,” the chief said. They echo placards placed by municipalities at beaches and parks across the South Fork .

Chief McGuire reported that during a Monday conference call with East End chiefs and Chief Cameron, the consensus was that “everybody looks like they’re doing the right thing.” Compliance is improving.

In terms of the ambiguous fine, he said, “We’d like to change it from criminal to something from a civil standpoint, like a building code violation.”

Officers could give tickets carrying the $1,000 fine to noncompliant individuals, and the chief said, people tend to want to avoid such penalties. He reported the chiefs are looking to Albany to see if that could become a statewide order.

Speaking to the compliance — or lack thereof — at county beaches and parks, County Executive Steve Bellone on Friday said he opposed their closure. People need the chance to get fresh air outdoors.

“It’s important for people to have the opportunity to get out of the house,” he said.

While the executive order bans gatherings of any size for any reason other than by essential personnel, the county executive said that if two people are in isolation together, their being together in public is allowed. However, he asked earlier in the week, that families designate one member to do grocery shopping to avoid congestion in grocery stores.

During a radio update on WLNG last week, Southampton Town Supervisor Jay Schneiderman said he, too, opposes the notion of closing area beaches.