The Simple Joy Of Bathing A Grown Man - 27 East

The Simple Joy Of Bathing A Grown Man 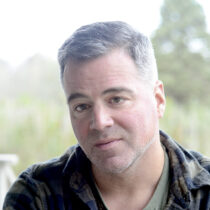 Stories from the South Fork

Yeah, sometimes I come up with a headline first and then a column to match. And, sometimes, having such a blank slate is serendipitous.

I’m in the bathroom again, performing a function that would have been unimaginable to me at other times in my life. The polar opposite that comes to mind puts me on the 13th hole of beer-a-hole on the golf course at Audubon Park, New Orleans, circa 1991. We’re trying to find our roommate SteveO, 80 pounds drenched; he would turn up the next day, having passed out in a bunker and subsequently been shot at by a hunter, who thought he was a rabbit.

I’m holding a washcloth, and the sublime Pavement song “Major Leagues” comes to mind. Old punk has her world turned upside down, all good, real pleasures. A baby.

The stuff that counts.

The amazing thing is, I don’t even think about it anymore. I’m like a nurse. You’ve wondered about it, haven’t you? How do they summon up the ability to clean the rear end of a 90-year-old on a relatively low wage? Or any wage?

But Dylan’s always been great at keeping himself clean, making this twice-weekly “tubby,” as we call it, more of a control, a supplement to his regular showers. Just making sure all’s good.

He’s 23 now, and if you’ve read my columns for a while, you know I’m talking about Dylan, who has autism, serious challenges, and is doing his best, but he needs help.

So I clean him, methodically. He anticipates every move — holds his hands out, lifts his arms up, pops his full body out of the tub, leaning forward.

It doesn’t bother me at all. It puts my mind at ease that he’ll be super fresh.

But it’s more than that. It’s become, through some very difficult recent times, kind of an oasis. For both of us.

It wasn’t long ago that everything was upside down for the poor guy: He is tormented by hormones or environmental challenges, and we try to predict and avoid a cocktail of pharmaceuticals, ostensibly meant to relieve the first two.

Less than a year ago, he wouldn’t eat, sleep, bathe. Cried a lot. Was physically violent. Threw everything he could get his hands on at the wall, at maximum velocity.

But the funny thing was that even through all that, the tubby was almost always an oasis. Even then, when it got to shaving him, an amazing thing would happen.

There was a time, less than a year ago, I was washing his face, and everything was wrong with him, and he got my thumb between his teeth and bit as hard as he could, wouldn’t let go. I screamed and shook him and did everything I could, but nothing would get him to let go. I thought the nerve damage was permanent. I ended up getting full feeling back in about three months.

Usually, though, this is our time, when he lets me know all is good.

When I shave him, no matter what else is going on, he giggles. It always lifts my spirits.

As do his other quirks. It can sometimes take hours to get him out for our “fun stuff,” dad time on the weekend mornings filled with egg sandwiches, playground visits, nature trail walks, endless hours in the ocean in the summer and usually late into fall.

So you resort to new and unusual prompts. One was: “Hey, you don’t even need to get dressed! Just hop in the car in your pajamas!”

And so I’m sitting in our red pickup in front of our house and he jumps in. I had put his clothes on the floor. A cop was coming up the street, and I was curious as to why, so took my mind off Dyls. As the cop was driving past, he slowed down and gave us a really funny look. I had no idea why.

I looked over and Dyls was completely naked.

Several weeks later, we were heading down Blank Lane after he’d picked out a CD to play, and this time he’s dancing around naked. He fortunately got his clothes on before we reached a busy street.

Since, usually lately, a trip to a nature trail ends up with a jump off a bridge into the water or walking straight through puddles, two of his latest compulsions, these trips almost always end with a visit to the tub. After the naked dancing episode, we were going through the routine and got to the shaving, and he looked up at me with the light eyes and let out a huge giggle.

“Buddy, do you know what?” I said. “That’s my favorite sound in the world.”

And so he did it five more times. I choked up and tried to laugh through it so my tears wouldn’t confuse him.

We had another great weekend last weekend, and then early in the week I get a call at work that he had smashed a piggy bank through one of our front windows. Took three tries, apparently.

The snowstorm seemed like a great opportunity for lightness and fun, so we took a shot at Sagg Swamp Preserve. The snow seemed about 18 inches deep. I was wiped after about 100 yards, but given options, Dylan pointedly chose to keep going. I was struggling to keep up.

When we got to the bridge over the little brook, I could hardly talk. I suggested we sit on the rail of the bridge and take a rest. And we sat there just like two friends in an almost unfathomably peaceful place, catching our breath and watching the water tumble over the rocks.

Later, I put him in a warm tub and gave him a shave, and he giggled and lit up.

A couple of hours later, he would be, inexplicably, crying. Had he wanted to stay in the bathroom longer? Was some other aspect of his needed routine disturbed? We retraced our steps, encouraged him to go back in the bathroom if he needed, take as long as he wanted to make it right, and he did.

But you just wonder how it turned upside down, since he can’t tell us.

And you wonder how to get that shaving feeling 24/7.

The Game, Finally, Gave Me Something Back

So You’re Taking Over an Iconic Local Bar …

I heard from someone who knows someone who may have something to do with a ... 14 Dec 2021 by Tim Motz

Asking about the anticipated content of one’s own obituary seems unusual to me. Asking about ... 1 Nov 2021 by Tim Motz

A Bit Of Bathroom Poetry

Bathroom poetry may be the purest form of poetry there is. The reader is captive ... 21 Sep 2021 by Tim Motz

A recent scenario offers a window into my outlook on life that may help you ... 10 Aug 2021 by Tim Motz

Three Men And A Main Street

A Column Almost No One Will Read

The memory is, unfortunately, etched in stone in my personal chronology: Crossing the Verrazano, August ... 22 Feb 2021 by Tim Motz

The Bars We Miss The Most