Southampton Town Board Tells Committees And Advisory Boards To Use Discretion When Holding Meetings, In The Midst Of COVID-19 Outbreak - 27 East

Southampton Town Board Tells Committees And Advisory Boards To Use Discretion When Holding Meetings, In The Midst Of COVID-19 Outbreak 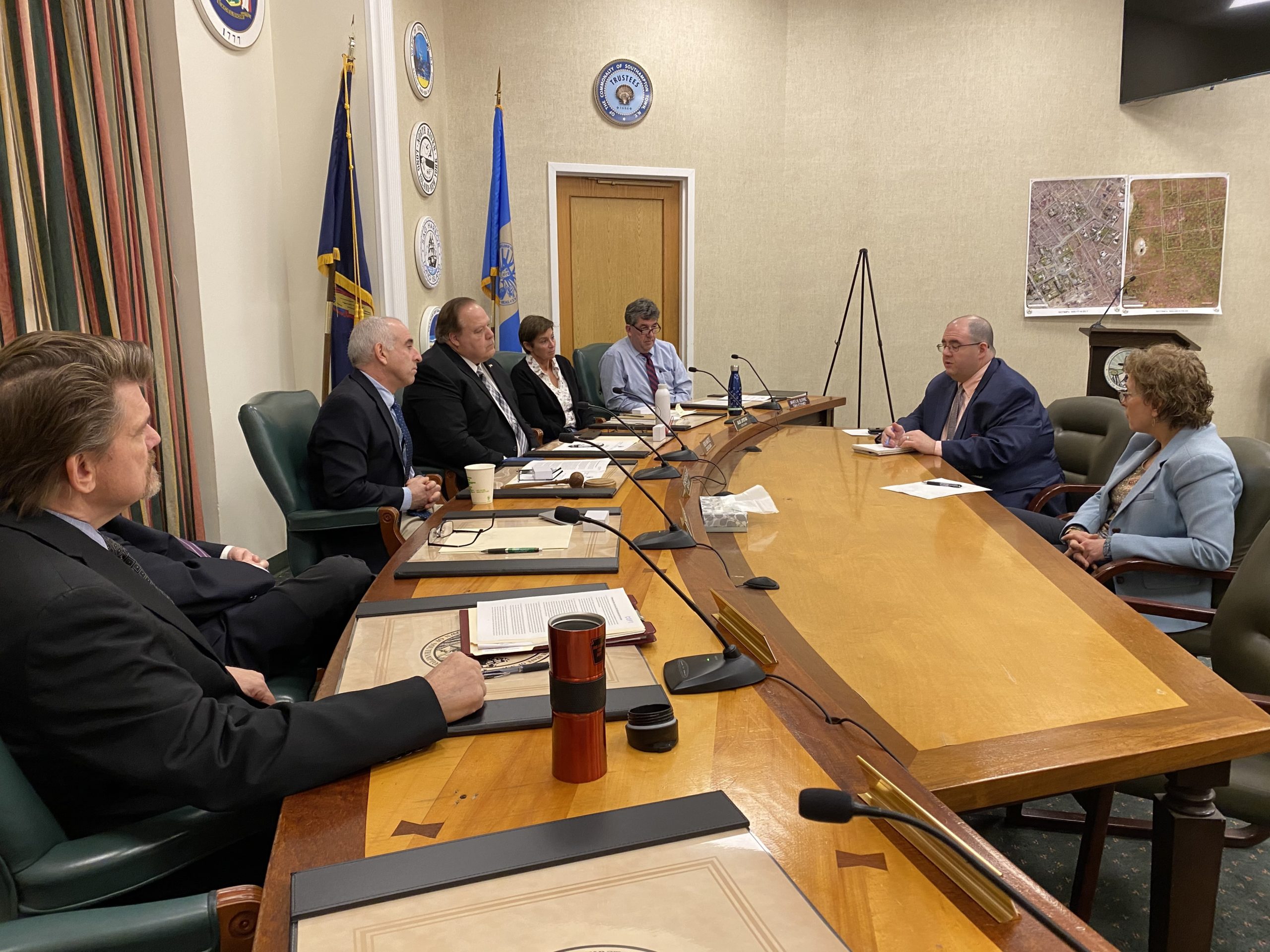 Southampton Town Board members are urging the town’s various advisory committees and other boards to limit public meetings in the face of the growing COVID-19 epidemic.

Unless an item of discussion is time sensitive, the board agreed, meetings should be postponed.

At a Town Board work session on Thursday, March 12, Town Supervisor Jay Schneiderman initially said he wanted advisory boards and citizens advisory committees to postpone all meetings for 30 days, a precautionary measure to protect their members from becoming infected by COVID-19.

Each of the board members was asked how they wanted to address the growing situation.

Board member Tommy John Schiavoni said he liked the idea of advisory boards and CACs not meeting for a month, while Councilman John Bouvier said he would rather let the individual committee chairs be part of the conversation, and allow them to have discretion on whether to meet or not.

Town Board member Rick Martel said it would be a good idea to start looking at the buildings the town operates and then suspend meetings at those buildings. Town Board member Julie Lofstad said the committees and boards should be reached out to as soon as possible.

Ultimately, a combination of all of the ideas was decided on.

On Thursday, Ryan Murphy, the town code and emergency management administrator, was asked to draft a memo to each of the advisory board and CAC chairpersons saying the town was leaving it up to them to determine whether to hold meetings if they were discussing time-sensitive matters, such as the Sustainability Committee looking at proposed legislation to ban leaf blowers in the town.

Things that need to be considered, according to Mr. Schneiderman, are whether the members of the committees or boards are part of the high-risk population that could contract COVID-19, whether there will be enough space between each member so that everyone is not breathing on each other, and whether there will be fewer than 20 people at a meeting.

Mr. Murphy told Town Board members that 20 members or fewer should be okay.

In addition to regulations on advisory boards and CACs, Mr. Schneiderman was concerned about town facilities being used for any type of meeting, but he said he did not want to interfere with meetings held by Alcoholics Anonymous, the LGBTQ community or any other group where canceling the meeting would interfere with their mental health.

Mr. Murphy suggested that all groups, whether town-appointed or not related to the town, that use a town facility assess the situation and use their best judgment.

“Until we understand this issue more, I’d rather err on the side of caution,” Mr. Schneiderman said.

The Village of Southampton is also taking precautions to ensure everyone is safe during the outbreak.

In an email on Thursday, Southampton Village Mayor Jesse Warren encouraged village residents to sign up for the village’s CodeRED mobile alert program.

According to the village website, CodeRed is a web-based communication system that allows public safety personnel to keep residents informed of emergency situations by way of telephone, text messages, email and social media.

In order to sign up, residents can go to www.southamptonvillage.org, and then click on the “CodeRed” banner at the bottom of the page.

It was smooth sailing for The Sag Harbor Whaling and Historical Museum when it opened ... 13 Jul 2020 by Marisa Valentino

New York State Assemblyman Fred W. Thiele Jr. released a statement Tuesday supporting a decision by the U.S. Supreme Court on Monday that struck down a Louisiana law requiring doctors who perform abortions to have admitting privileges at nearby hospitals. The court found that the law placed an undue burden on women seeking abortions and served only to block constitutionally protected access to reproductive care. “The Supreme Court’s 5-4 decision represents a significant victory in the nationwide fight to protect a woman’s right to choose,” Mr. Thiele said in his statement. “We can only hope that we see similar decisions ... 30 Jun 2020 by Kathryn G. Menu

Local School Districts Still Providing Meals: Here’s How To Get Yours

Schools are closed, but districts on the South Fork know they’re often the best source of nutritious meals for some students, especially those in the free and reduced-price lunch program. As a result, most districts are continuing to provide food during the COVID-19 crisis. Here’s a rundown of what each district is doing: Southampton The district is providing free grab-and-go breakfast and lunch on weekdays to students from 8 to 10:30 a.m. at a drive-through window located in the back parking lot at Southampton High School, 141 Narrow Lane, Southampton Village. Tuckahoe Tuckahoe Common School District Superintendent Leonard Skuggevik said ... 20 Mar 2020 by Staff Writer

Kindness Is Key During COVID Crisis

As the list of closings grows longer and the warnings to stay home become more emphatic — and necessary — to decrease the spread of COVID-19, some people on the East End are stepping up to help those who might need assistance during a self-quarantine. An employee at the Hamptons Center for Rehabilitation and Nursing in Southampton requested, in a social media post, donations of puzzles, games, coloring books, magazines, playing cards and word searches — anything to keep the clients busy while visitor restrictions are in place to mitigate the spread of COVID-19. A new public Facebook group called ... 16 Mar 2020 by Staff Writer

Q&A: Thiele Says Lack Of Testing Capacity Was The ‘Biggest Failure’ In COVID-19 Response This Week

On Friday, State Assemblyman Fred W. Thiele Jr. agreed to an email exchange regarding the ... 14 Mar 2020 by Joseph P. Shaw

School Closures And Cancellations Due To Concerns About COVID-19

Suffolk County Executive Steve Bellone has ordered all schools in the county to close for ... 12 Mar 2020 by Staff Writer

Closings Due To COVID-19 Concerns

Closures and cancellations in our area due to concerns about the spread of COVID-19 include the following. The list will be updated regularly. Announcements of closings or cancellation of public events hosted by nonprofit, human services, and other large gathering places may be sent to The Express News Group at kim@expressnewsgroup.com. An amended Town of Southampton State of Emergency Order that stipulates playgrounds at the Town of Southampton parks are now closed. The parks remain open, but the playgrounds are closed. Southampton Village Justice Court is closed. All cases will be adjourned and new court dates assigned. Constituent services and ... 10 Mar 2020 by Staff Writer

Just weeks after State Senator Kenneth P. LaValle announced he was not seeking reelection to ... 6 Feb 2020 by Greg Wehner