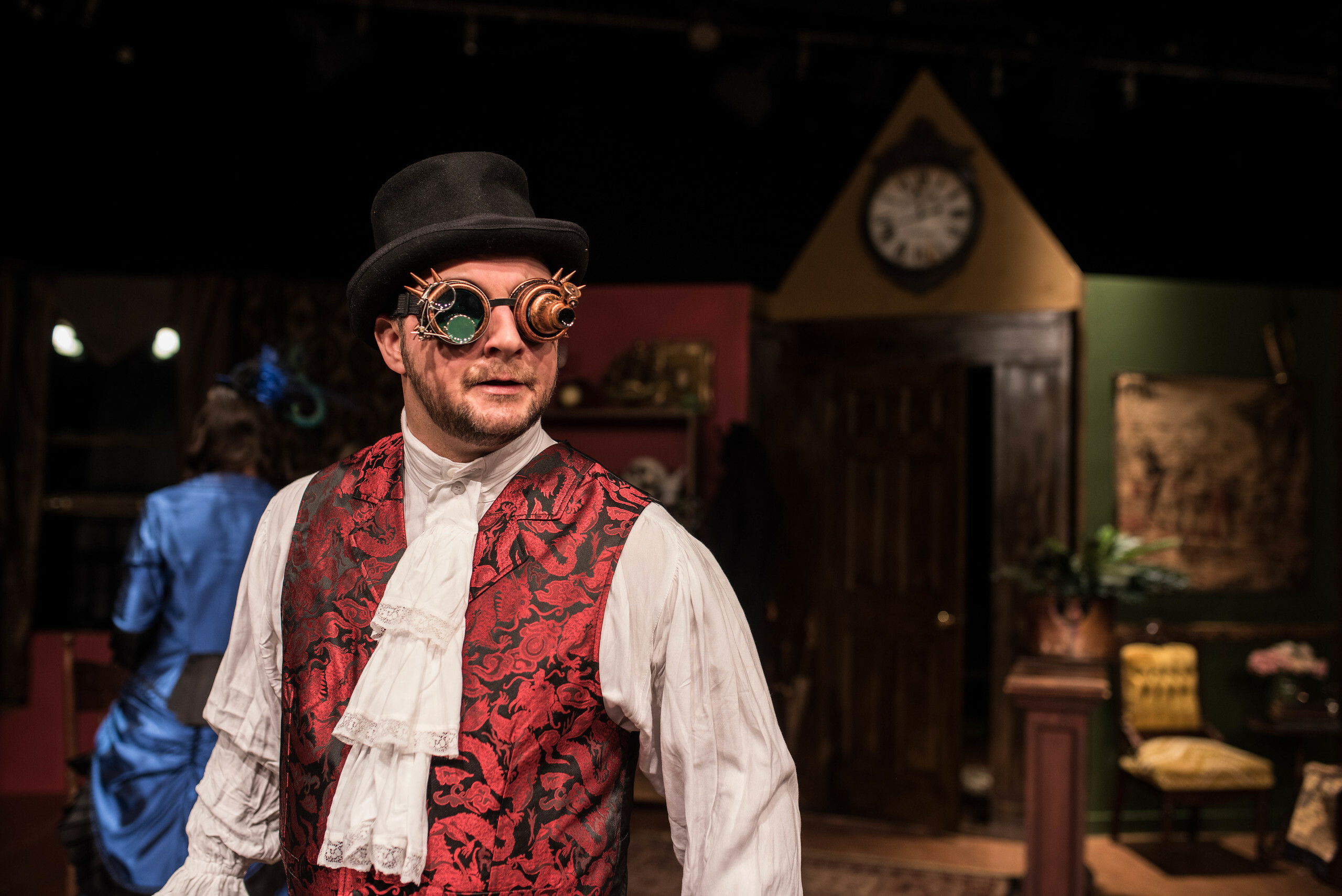 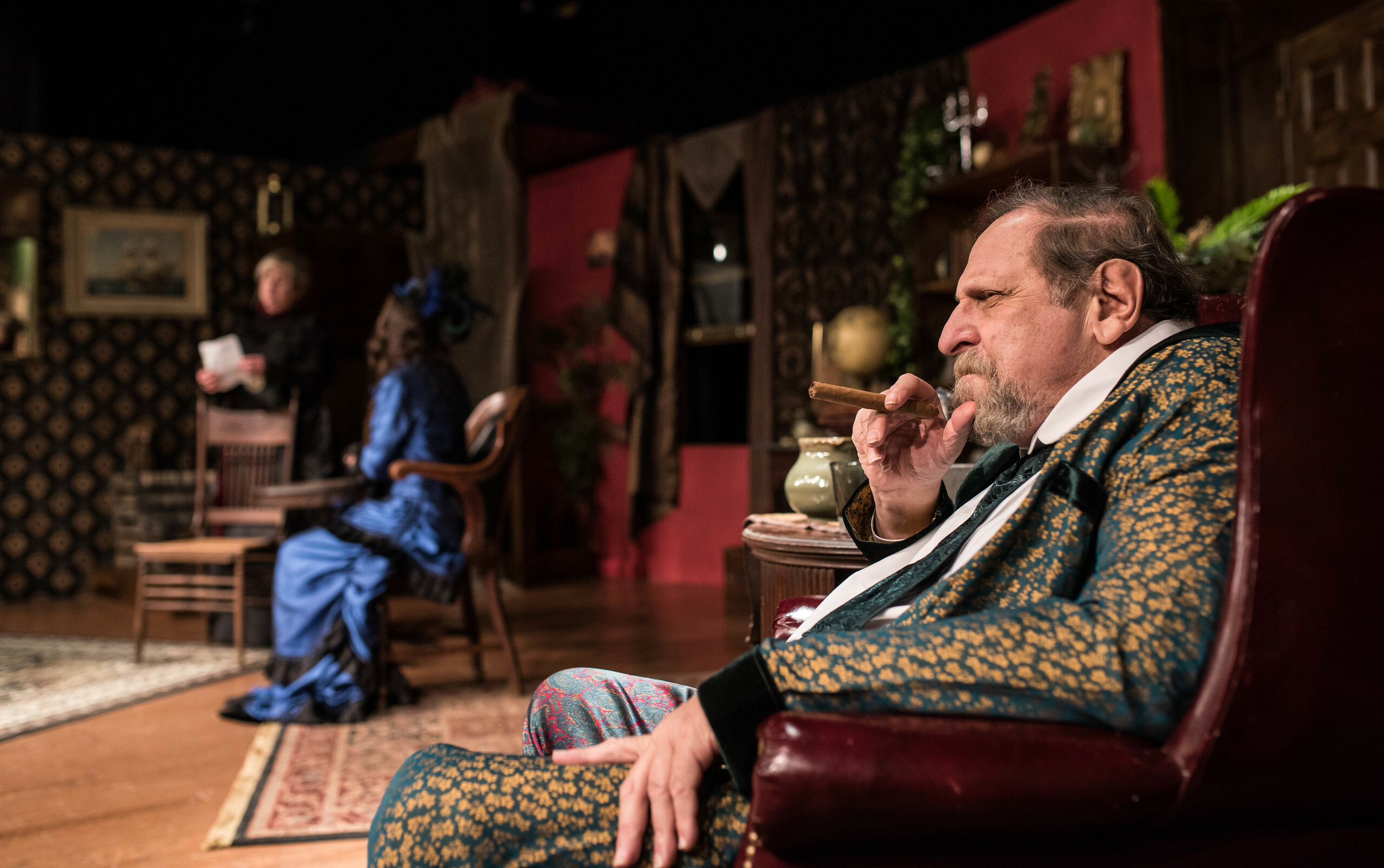 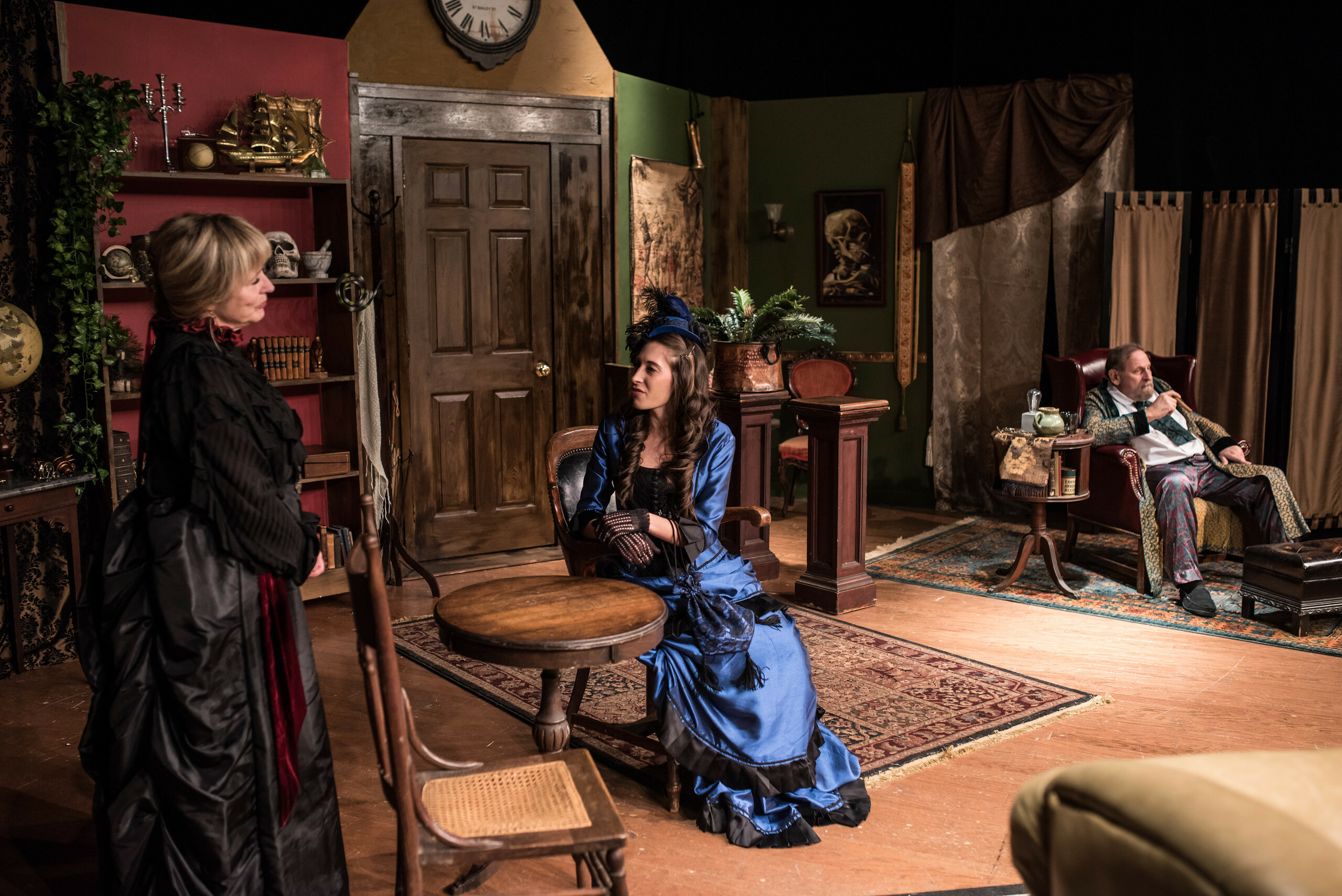 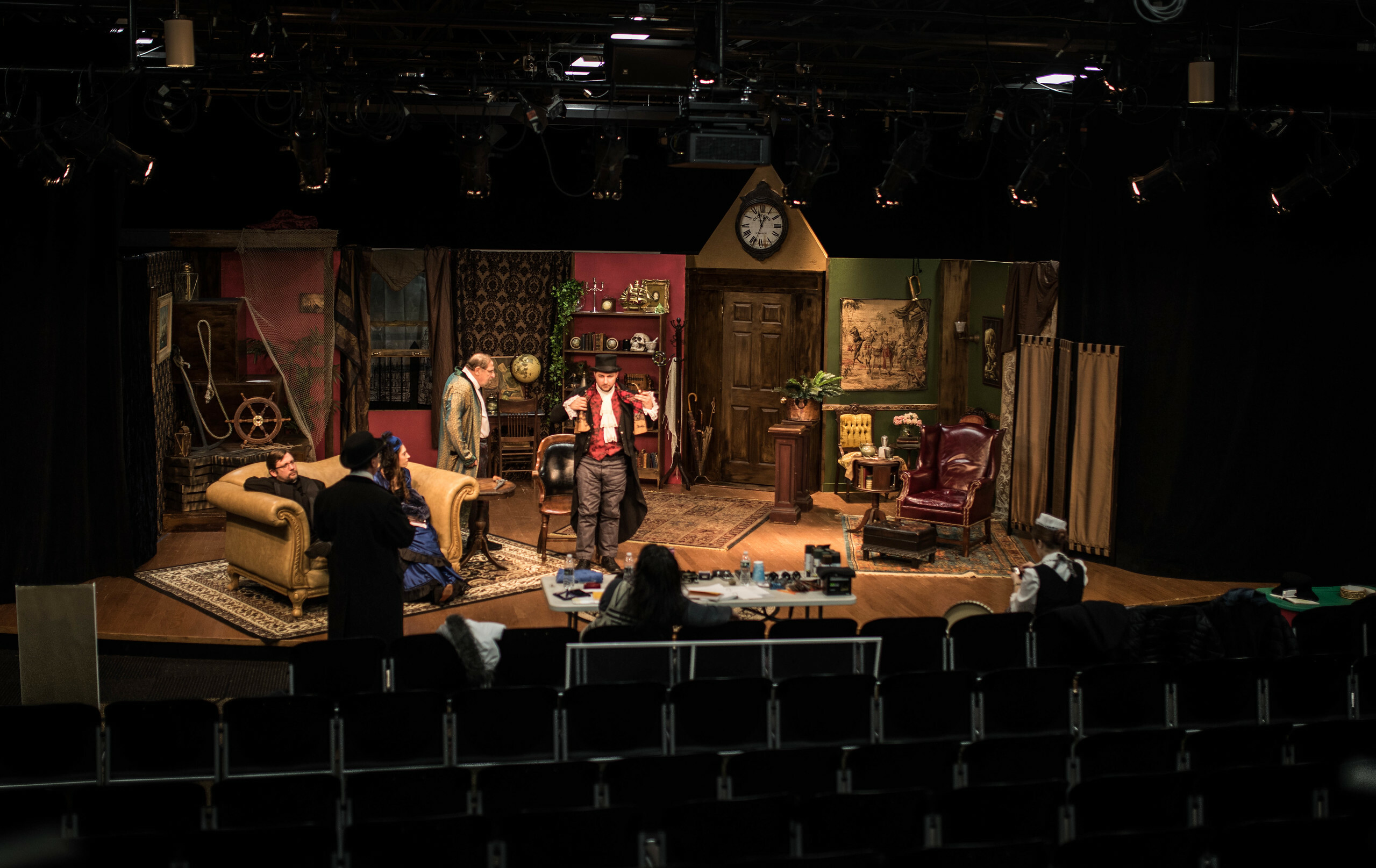 The cast in rehearsals for Boots on the Ground Theater's production of "Sherlock's Secret Life" at Southampton Cultural Center. Dane DUPUIS 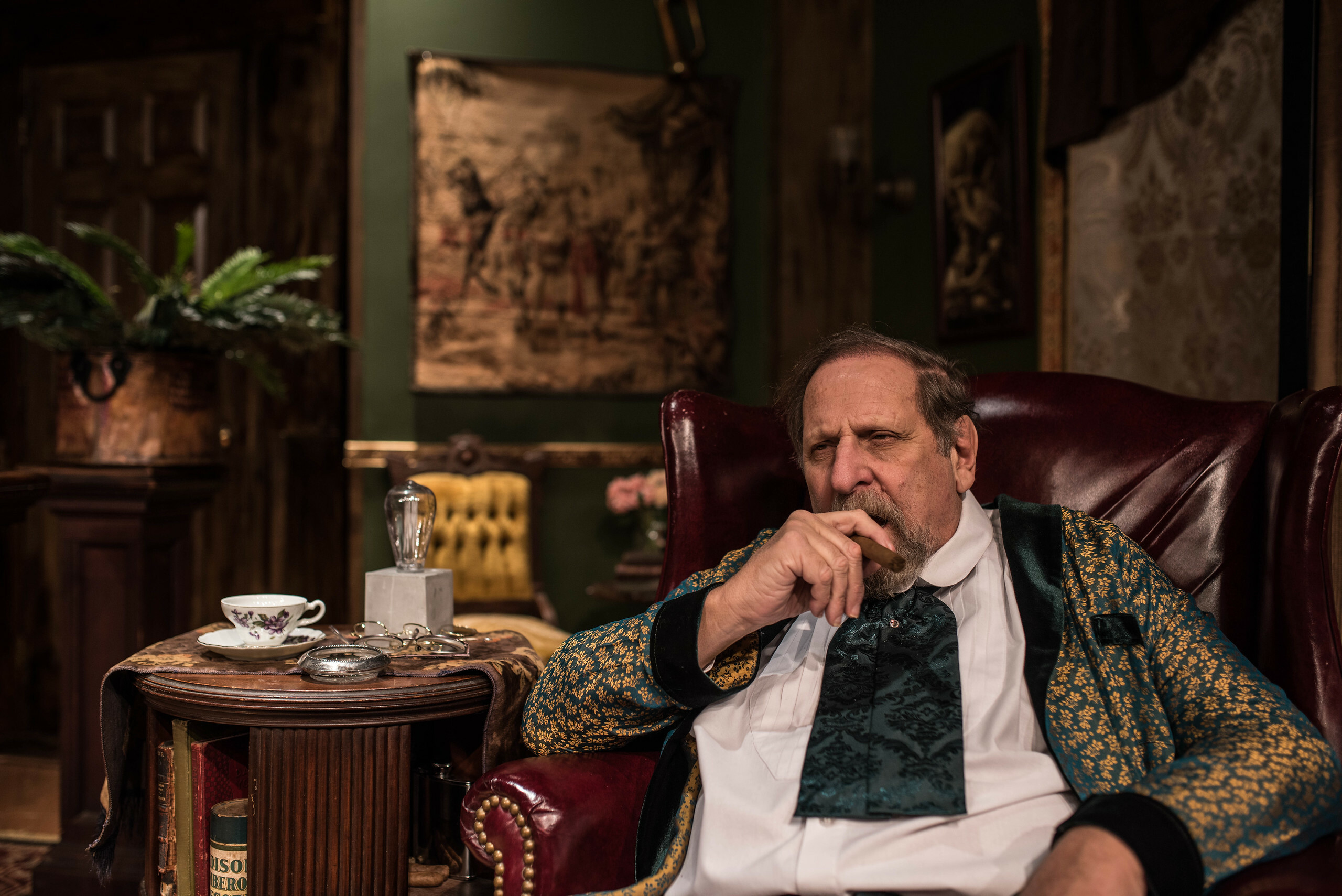 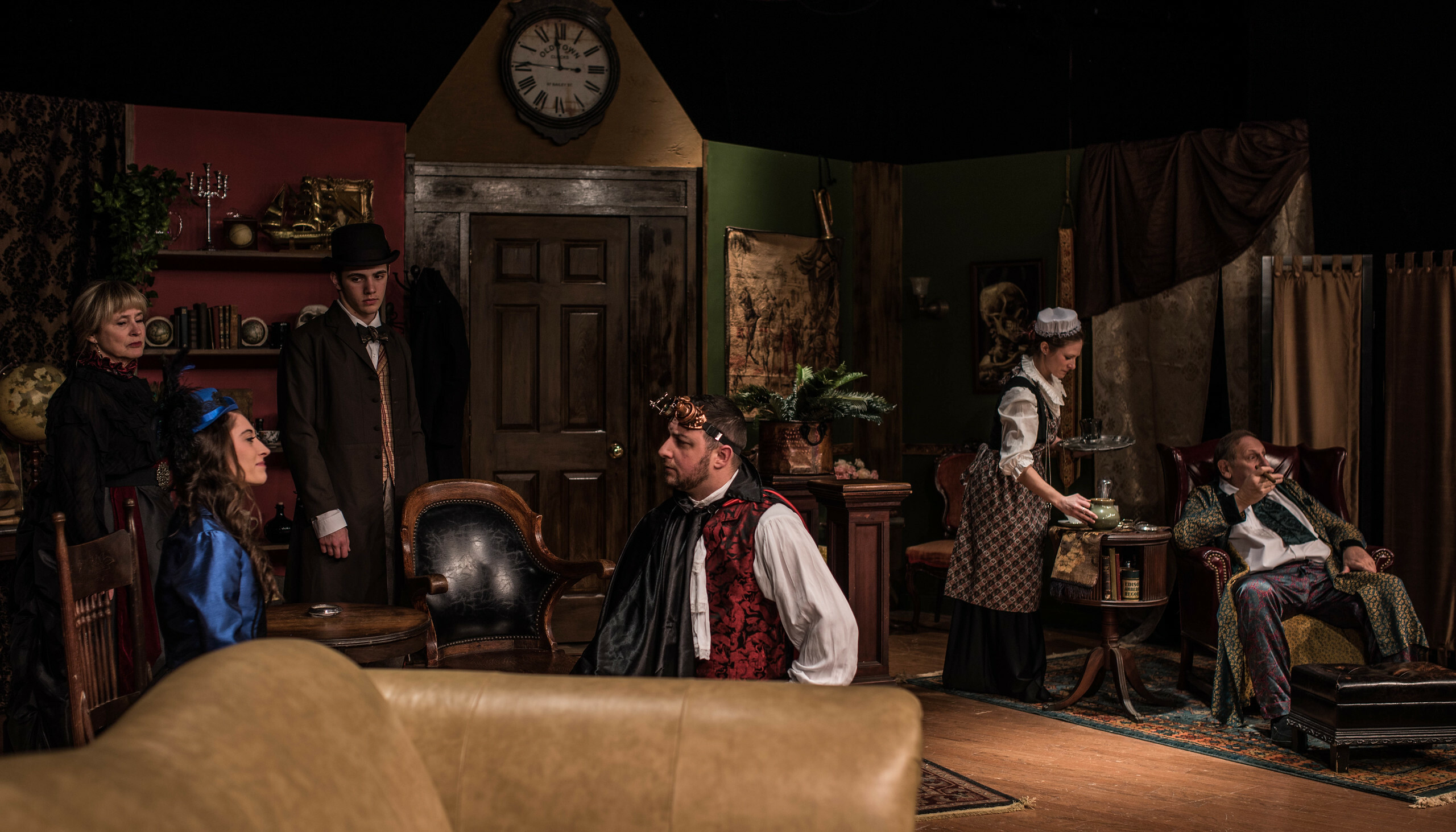 The cast of Boots on the Ground Theater's production of "Sherlock's Secret Life" at Southampton Cultural Center. DANE DUPUIS

Who doesn’t love a good whodunnit on stage — especially one filled with mystery, murder, intrigue and humor, all inspired by the pages of classic 19th century literature?

Welcome to “Sherlock’s Secret Life,” Boots on the Ground Theater’s latest production, which comes to life on the stage of the Southampton Cultural Center (SCC) for a three-week run beginning Friday, March 6.

As you might expect, this play is populated by the familiar figures made famous in Sir Arthur Conan Doyle’s tales about the adventures of Sherlock Holmes, the fictitious Victorian-era sleuth who made his literary debut in 1887. But “Sherlock’s Secret Life” is not, strictly speaking, solely a 19th century story — rather it is a 1997 play written by Ed Lange that offers a more modern, and often humorous, take on Sherlock and company.

The play, which is directed by Josephine Teresi-Wallace, begins with an older Dr. Watson (portrayed by Dan Becker), Holmes’s longtime friend and sidekick, reflecting on his early days with the famous sleuth (played by Tom Rosante). Watson then invites audience members to go along with him as he revisits Holmes’s very first case involving a mysterious, beautiful young woman (played by Alyssa Kelly) who shows up on the scene, having lost her memory.

“The play introduces us to the characters who will become well-known in the books,” explained Boots on the Ground founder Bonnie Grice. “It’s the first time we meet Sherlock’s nemesis, Professor Moriarity, the ‘Napoleon of crime,’ and his landlady Mrs. Hudson — I play her.”

Grice, who lives in Sag Harbor and has acted in many theatrical productions at SCC, has long been drawn to the literature and history of the 19th century. So when she founded Boots on the Ground two years ago, she did so with a specific goal to present stories from that era on stage. While the company’s first two productions — “The Miracle Worker,” about the life of Helen Keller, and “The Red Badge of Courage,” based on Stephen Crane’s Civil-war era novel — were both set in the United States, “Sherlock’s Secret Life” will transport audiences across the pond to Victorian England, and Grice couldn’t be more delighted about that.

“It maintains the traditions of language and it’s been an intriguing challenge for a lot of us in the cast to wrap our head around the language,” explained Grice of the Holmesian script. “It’s very Victorian. But we’re adding a 21st century spin on this.”

Also finding its way into the production are several steam punk elements that will add a special fun twist for Grice, who also creates costumes and collects objects that reference the Victorian and Edwardian periods.

“I’m over the moon about the set,” she said. “Josephine designed the set, including a loft. I dressed it and chose the color palette. My house is empty now because it’s all on stage.”

Grice has been drawn to 19th century design and sensibilities for most of her life. As a youngster, she recalls her father, who returned to college as an adult to pursue a degree in English literature, reading Sherlock Holmes and other novels of the era and discussing them with her.

“I’ve lost both my parents now, and I think about how much I owe him,” she said. “He influenced me so much and turned me on to characters like Holmes.”

When asked what it is, specifically, about 19th century stories and history that appeals to her, Grice said, “I love the costumes and the interiors and I hope people will sense that when they see the set.”

While Grice readily acknowledges the less than rosy side of 19th century life — particularly the prevalence of slavery and the non-existence of women’s rights — she sees the later part of the 1800s as being a time of ingenuity when advancements in science, medicine, social movements and technology improved life for many people in the world.

“I appreciate the Victorians and the ingenuity taking place at the time with Edison and Tesla and the beginnings of the civil rights movement after the war,” she said. “Susan B. Anthony was also starting her work at this time.”

While this story is set in London and Sherlock Holmes is decidedly British in his mannerisms and wit, interestingly enough, Grice has discovered a regional connection to the character. Actor and playwright William Gillette, one of the first to portray Holmes on stage, lived in coastal Connecticut and worked directly with Doyle to write an 1899 theatrical adaptation of the Holmes stories based Doyle’s writings. In 1916, Gillette even appeared in a silent film version of Sherlock Holmes.

“‘It’s elementary dear Watson’ wasn’t written by Conan Doyle, but coined on stage by Gillette,” noted Grice who adds that the actor was also the first to don the trademark Inverness cape, deerstalker cap and curved pipe that have all become signature Sherlock Holmes’ accessories.

As a director, Teresi-Wallace admits she came to this production having little familiarity with Doyle’s Sherlock Holmes writings. But she was very intrigued by Lange’s script in that it contains two stories in one — the first involving the present day Watson (Becker) narrating the flashback tale of his much younger self (played by 16-year-old Pierson High School student Thomas Schiavoni) as he tells of his earliest adventures with Holmes.

“What’s great is there’s comedy and mystery — everything you want with Sherlock Holmes,” she added. “It’s a wonderfully written play, ” said Teresi-Wallace, who directed Boots on the Ground’s production of “The Red Badge of Courage“ last year. “I already knew who I wanted for each part and I’ve been blessed to work with these people before.

“I’m feeling wonderful about the show,” she added. “I couldn’t ask for a better journey with these people.”

Sounds like the game’s afoot … and when it comes to channeling Sherlock Holmes, getting there is all the fun.

A special free matinee of “Sherlock’s Secret Life” will be offered for high school students on Saturday, March 14, at 2 p.m. Following will be a Q&A with Detective Sergeant Lisa Costa from the Southampton Town Police Department who will compare the work of detectives, both then and now. Seating is limited. Call Kirsten Lonnie at 631-287-4377 for details.