Bending Fiction In The Most Colorful Way - 27 East

Bending Fiction In The Most Colorful Way 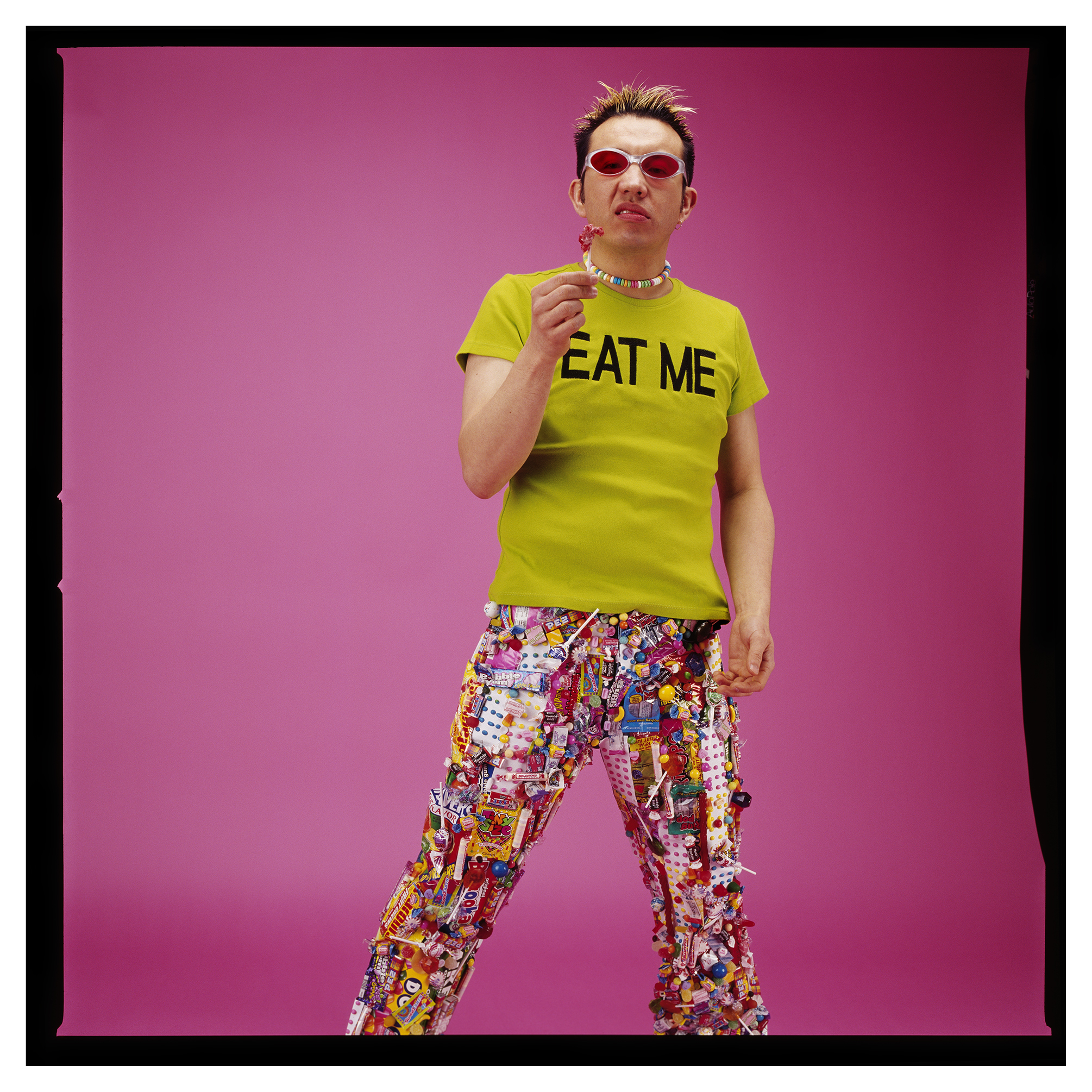 "John," a photograph by Lauren Lyons. 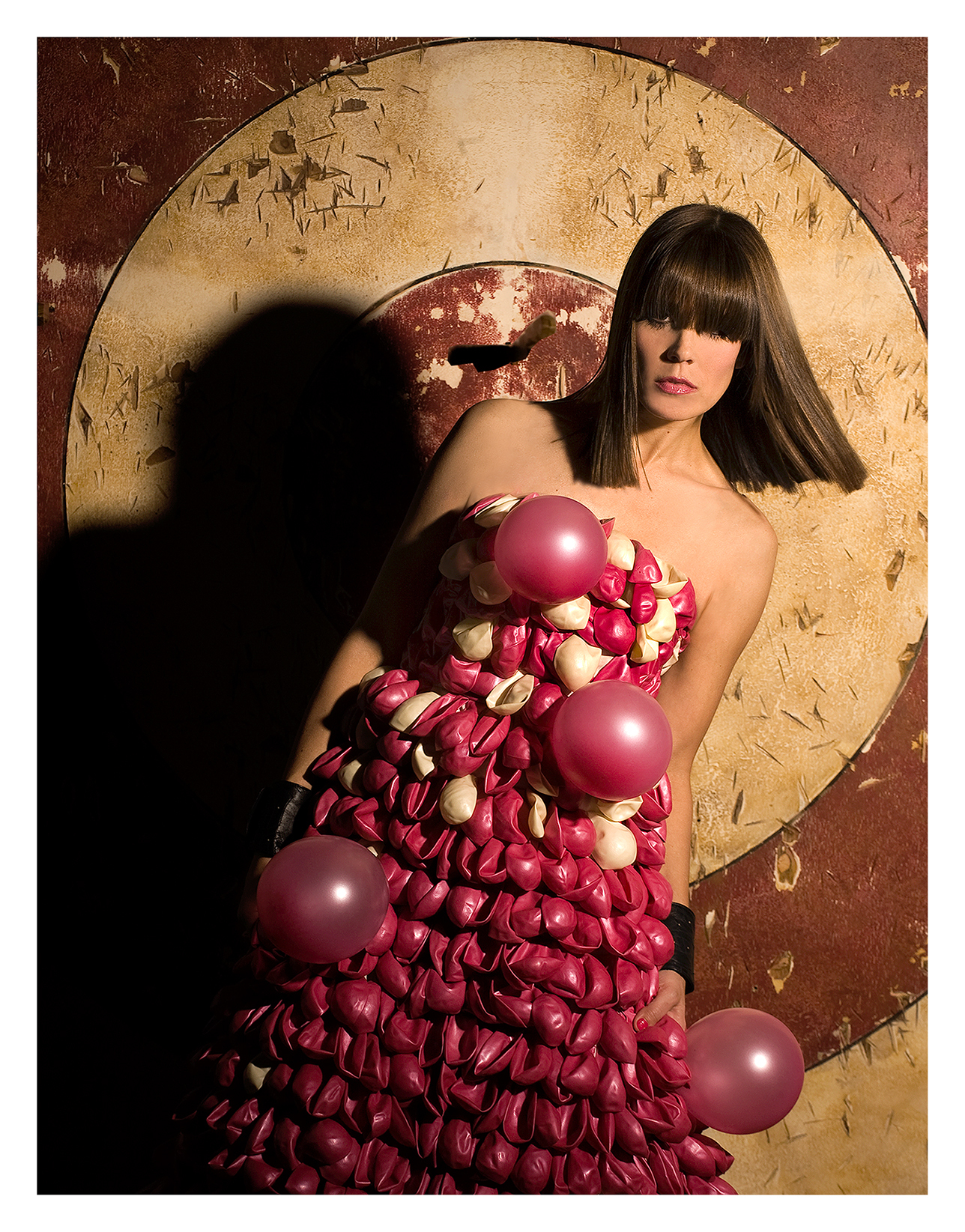 Lauren Lyons in one of her own photos.

Lauren Lyons has made it her mission to tell stories through the photographs she takes: Amy, a naked, painted woman smokes a cigarette as she sits on a public toilet; a spikey-haired man named John stands in front of a vibrant, pink backdrop — he wears trousers made of candy, an “Eat Me” T-shirt and a sneer; Carolyn, a woman in a bright red dress covered in mud, crawls on the ground toward the camera under the darkness of night.

Though Lyons controls every aspect of what appears in the frame — from the models and the costumes to the color scheme, props and setting — the responsibility of ultimately determining exactly what story the image is telling lies with the viewer.

Now through the end of December, Lyons’ images are on view in “Lauren Lyons: A Bender of Fiction” at the Quogue Gallery. The exhibition features 12 provocative large-scale photographs from shoots that Lyons has conceived and styled over the course of the last two decades. This is the first time these photographs are being exhibited formally together in a gallery setting.

Though Lyons lives and works in Philadelphia, since mid-May, she and her husband, Doug Lewis, a tennis pro, have been holed-up at their summer home in Quogue. It’s been a bit of an adjustment for Lyons to be away from her professional setting in Philadelphia for so long.

“I haven’t been able to work on photo shoots, because I work with a crew,” she explained in a recent phone interview. “It’s very weird. I don’t know what we’re planning to do.”

Living in this current state of the unknown brought on by a pandemic has taken Lyons a bit out of her comfort zone. As an artist, she admits that she definitely likes to be the one taking charge of her work.

“As I’m sitting here, I’m rearranging flowers in a vase because they don’t look quite right,” Lyons said. “I’m very type A. I like to contrive and control the entire scene. That’s why I work with strobe lighting, because I can control it. I’m intimidated by natural light. The sun goes behind a cloud and I can’t control that.”

So it should come as no surprise that in the creation of her photographs, she doesn’t tend to solicit input from her subjects or anyone else involved in the process.

“I conceptualize the idea, make the props or have someone else come up with props and I micromanage them while they make them,” she said. “I hire someone for hair and makeup and give them direction. I have that vision in my head and I direct the subjects too.”

When it comes to those subjects, Lyons rarely uses professional models — “It’s often better if they’re not professional,” she said, “professionals like to smile a lot” — instead, she relies on friends and sometimes people she sees on the street who she thinks will fit well in the scene she is imagining.

“Usually, the props and locations come first, then the person,” said Lyons, though she adds that on occasion, she’ll see a stranger who will trigger an idea. That’s what happened with Dylan, a James Dean-esque young man she encountered in Philadelphia

“I saw Dylan first in a coffee shop, and, at the time, I had never shot anything in the studio and knew I wanted to shoot him in front of a clean white seamless,” said Lyons. “But most of the time, I might find a color or a dress or something first, then the location, then it builds.”

Though she’s been working in the field for decades, Lyons didn’t initially set out to be a professional photographer. Initially, she set her sights on the Art Institute of Philadelphia, where she studied advertising and graphic design. But she dropped out after realizing the program wasn’t what she had thought it would be and instead, became a self-taught photographer who came to the art-form through the music business in Philadelphia.

“I never did the traditional fine art route or journalism or anything like that,” she said. “I was dating someone who was a music manager and learned everything on my own by shooting some of the musicians he represented who needed photos.

“I had been a hobby photographer before that and dove head first into it.”

Over the years, Lyons has shot photographs for album covers, concerts and festivals and worked with record labels, magazines, concert promoters and advertising agencies. But it is in her own portrait work that she truly expresses her vision, and because she works primarily with people who aren’t professionals, her subjects have to trust her. That was very true of Amy, the woman who posed nude wearing nothing but fanciful body paint.

“It’s not Amy’s thing — she’s very brave,” said Lyons, explaining how the image came about. “I had a painter friend who was inspired by Keith Haring and he would paint on paper or cardboard and leave them all over Philadelphia for people to find and watch people take them.

“He would come to my studio several times a week, and if I was doing a photo shoot, he’d leave sticky notes and a scattering of drawings around my apartment and it was a rip,” she continued. “When I was trying to come up with an idea for Amy, because she has a Joan Jett vibe, I said to him, ‘Can you do it on a body?’”

It took the artist more than four hours to create the images on Amy’s body and when he was done, she was wrapped in a blanket and taken to a bar where Lyons knew there was a bathroom with a purple wall, which was exactly the look she wanted.

“Amy’s boyfriend was a little mad at me because I put postcards of her all over,” admitted Lyons.

When asked to explain the inspiration behind the candy pants photograph titled “John,” Lyons pointed to her own love for the stuff as the impetus for the idea.

“I made those pants because I used to have an addiction to that hard candy that broke your teeth, which it did and I had to have a root canal,” she admitted. “I vowed to have John Saye, from the band The Caulfields, in one of my photographs and I created the pants for him. He had a blast. I glued them on denim — they were very heavy — it was $600 dollars in candy.

There is one image in the exhibition that features Lyons herself, outfitted in a dress created from balloons, most of which are deflated. She stands in front of a target into which a knife has been thrown, she leans slightly to her left, just out of range of the knife.

“It’s the only time I photographed myself, and I did it reluctantly,” said Lyons, who was asked by the owner of an art magazine to create the self-portrait for the cover of an issue which featured a story on her work. “I was against it at first, but he convinced me. I spent time walking around the city and couldn’t come up with an idea. I think it was harder because I was in it.”

Then Lyons stepped on a red balloon on the street, picked it up, brought it home and hung it on her mood board.

“Two days later, I came up with an idea of a balloon dress with a circle target behind me and a knife thrown into it,” she said.

The magazine was coming out in summer, and she felt the pink of the balloons would be ideal for the season, while the target with the knife spoke of carnivals and sideshows. But in terms of finding any meaning beyond that? Well, that’s your job.

“I love hearing what others think,” she said.