From Nature To Paper: Alexis Rockman Teaches Students The Art Of Field Drawing 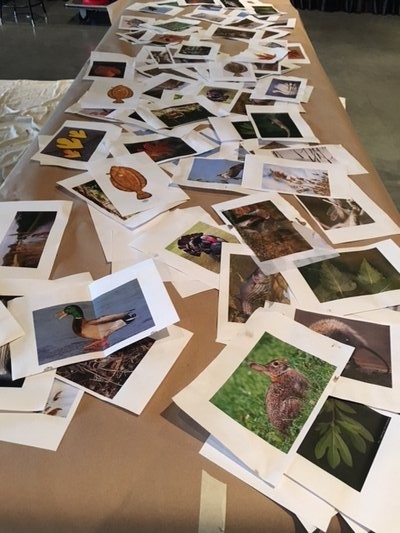 Dirt, mud, sand. These are the substances of youth that parents everywhere implore kids to keep out of the house.But Alexis Rockman, the Parrish Art Museum’s 2015 artist in residence, is all for bringing dirt indoors—and using it to create images of flora and fauna from across the East End and around the world.

That is exactly what more than 400 local students did last month at the museum, as Mr. Rockman led a series of workshops in which fourth- through 12th-graders created their own drawings using his unique technique: combining soil with matte medium and applying it to paper using pipettes and paintbrushes.

The students came from Bridgehampton, Southampton and Tuckahoe public schools, as well as East Hampton’s Project MOST and the Riverhead Charter School, for the workshops hosted by the museum’s education department, in conjunction with “Alexis Rockman: East End Field Drawings.” The exhibit features 93 images on paper depicting plants and animals that Mr. Rockman created using natural material, such as soil and sand, collected at 18 different sites around the South Fork—from farms and beaches to coastal ponds and woodlands.

“Some of the best ideas come when you’re kind of desperate,” Mr. Rockman explained, addressing a group of attentive Southampton sixth-graders who sat on the floor of the museum in front of a wall filled with his field drawings. “In 1994, I was camping for several weeks in the Amazon in Guyana. I was drawing insects, and I had one pencil that got smaller and smaller.

“Then the pencil ran out. I thought, ‘What am I going to do?’” the artist recalled. “A friend suggested I make a drawing out of mud as a kind of joke.

“So I made a drawing of a mosquito that bit me,” he said.

His method may have started as a joke, but in the years since, the process has led Mr. Rockman to create hundreds of field drawings in locales as far-flung as Madagascar, South America and Japan. As a frequent visitor to the East End since the 1980s, it occurred to him that this area would be an ideal place to create field drawings—not only because of the natural spaces that abound, but also because of the many changes the South Fork has seen due to human impact and development in recent decades.

These impacts are evident in Mr. Rockman’s field drawings, which adorn one of the museum’s walls. While he came to the East End well aware of the box turtles he helps across the road, the turkeys that roam the woods and the many deer he sees while driving around, the artist also understood there were many more species here that he knew little about.

So in order to further acquaint himself, Mr. Rockman consulted with Jim Ash, Carol Crasson and Nicole Cummings of the South Fork Natural History Museum in Bridgehampton.

“I asked them what had changed in their lifetime about places that had plants and animals that used to be here but no longer are, places that are the same, and places where there are more animals like deer and mosquitoes,” he said. “I made X’s on the map and went to three places a day with Ziploc bags, and I made these drawings out of the mud or sand of some things that live in these places.”

Mr. Rockman then turned to the wall of field drawings and showed the students a collection of images he created using soil taken near farmland, which included beans, peppers and tomatoes—plants that have, through artificial selection, been cultivated for human consumption—as well as animals, such as the spotted cucumber beetle and guineafowl, which are often found near farms.

Next, Mr. Rockman shifted the discussion by pointing to the drawings he created around Hook Pond in East Hampton Village. “It’s basically a golf course, and there are lots of deer, swans, rabbits, ticks and mosquitoes,” he said. “Those have a bright future.

“These are images of things I’m happy, sad or worried about,” added Mr. Rockman, who went on to point out drawings of species that once lived near coastal ponds on the East End, but are no longer.

“These paintings are of birds that were killed because of chemicals put on the land decades ago,” he said. “Amphibians like frogs and these salamanders are in danger all over the world.”

“And blue curls are believed to be extinct,” he added, pointing to an image of the plant that he created using soil from Sag Harbor’s Round Pond.

Then it was the students’ turn to ask questions, and they eagerly quizzed Mr. Rockman about the species displayed on the wall in front of them.

“Me too,” Mr. Rockman grinned. “That’s one of my favorites.”

“Did you look at the animals while drawing them?” one student asked.

“I look at pictures of animals,” Mr. Rockman explained. “I didn’t see these animals in this exact position, but when I did the research, I decided they were there.”

One of the first paintings in the series was that of a leatherback sea turtle, which a friend had told him was washed up on the beach near the border of Southampton and East Hampton, he said.

“I had seen them in Costa Rica laying eggs, and they’re the biggest turtle in the world,” he said. “I drove down to the beach, and to my left saw this enormous turtle. When I got to it, seagulls were eating its eyes.

“It was dead,” he clarified. “I got some great photos and then grabbed sand from under its flipper … and that’s how it all started.”

Though the focus of the Parrish exhibit and the student workshops was Mr. Rockman’s field drawings, he is, in fact, renowned for his massive paintings of futuristic landscapes altered by human meddling and environmental degradation. Prior to the workshops, the museum’s education director, Cara Conklin-Wingfield, and museum educator Wendy Gottlieb visited classrooms to introduce the students to two of Mr. Rockman’s large-scale paintings—“The Farm,” which references genetic engineering in livestock, and “Manifest Destiny,” a mural-size painting that offers a dystopian vision of a crumbling Brooklyn Bridge after rising oceans have submerged New York City, leaving eels, rats and cockroaches as the predominant life forms.

“We have an approach for teaching from objects, which is to ask students what they see, and then we build on consensus—and Alexis’s paintings are perfect for that kind of exploration,” Ms. Conklin-Wingfield said. “We chose the paintings ‘Manifest Destiny’ and ‘The Farm’ because they relate to environmental concerns that students are well aware of, and draw attention to Mr. Rockman’s values and concerns as an artist.”

During their classroom visits, Ms. Conklin-Wingfield and Ms. Gottlieb gave each student a field study sheet and a small plastic bag with instructions to go outside, make field notes and gather material on site to use as the medium in their own artwork at the museum.

With their field notes, reference images of the species they had chosen to paint and plastic bags in hand, the students gathered around Mr. Rockman while he demonstrated the process of mixing dirt with matte medium—basically paint without pigment—in plastic cups to create the paint. He repeated the process in a second cup, adding more dirt this time so he had both a lighter and darker mixture with which to work.

Mr. Rockman then used a pipette, much like those in science labs, to draw the outline of a crab on his paper with clear water. “Then I brush it in,” he explained as he spread the water out before using the pipette to pick up the lighter dirt mixture, which he applied along the wet edges of his image to give it color.

“Use the light stuff to give a subtle idea of what’s happening,” he said as he worked. “The evolution of crabs and their legs is so amazing to me. Where are the darks? Where is the light coming from? I say upper left.”

“Decide what the most interesting thing is to you and make it the darkest,” he added as he applied the darker pigment to his drawing. “I like the claws, because they can hurt you.”

“There are many ways of having perspective,” he said as the students got to work on their own images. “One of the jobs of an artist is to explore things you have a feeling about and are interested in.”

For student Lauren Halsey, the family farm in Water Mill was a natural place to gather the soil for her painting. Though unlike Mr. Rockman, she decided not to paint something that grows or lives on the farm.

“I’m going to draw a bird. I think it’s a piping plover,” she said, glancing at her reference photograph.

Classmate Lily Middlekauff explained that although she collected her dirt near the entrance to her house, which is in the woods, she had opted not to paint an East End species at all.

“I see all types of birds and things there,” Lily noted, “but I chose to draw sand dollars, because they were something I found in Florida this summer.”

Another student, Gus Segarra, worked nearby on his image of a flounder—the perfect subject for an avid fisherman. “I’ve been fishing for six years,” he said. “The biggest striped bass I ever caught was 38 inches.”

Most of these sixth-graders have grown up on the East End and, as a result, Mr. Rockman found them to be keenly tuned in to their environment—not only for its beauty and bounty, but because of the development pressures that have led to many of the changes evident both on the surface and in the subtext of Mr. Rockman’s paintings.

“They’re as smart as they can be and very aware,” the artist said of his young students. “The drawings are so fundamentally direct and accessible because they’re made out of stuff that’s accessible to anyone.”

“Alexis Rockman: East End Field Drawings” will remain on view through Monday, January 18, at the Parrish Art Museum in Water Mill. The paintings created by the students during their workshops will be featured in the 2016 Student Exhibition in February. For more information, call (631) 283-2118, or visit parrishart.org.