Growing Cyclamen Indoors And Out - 27 East 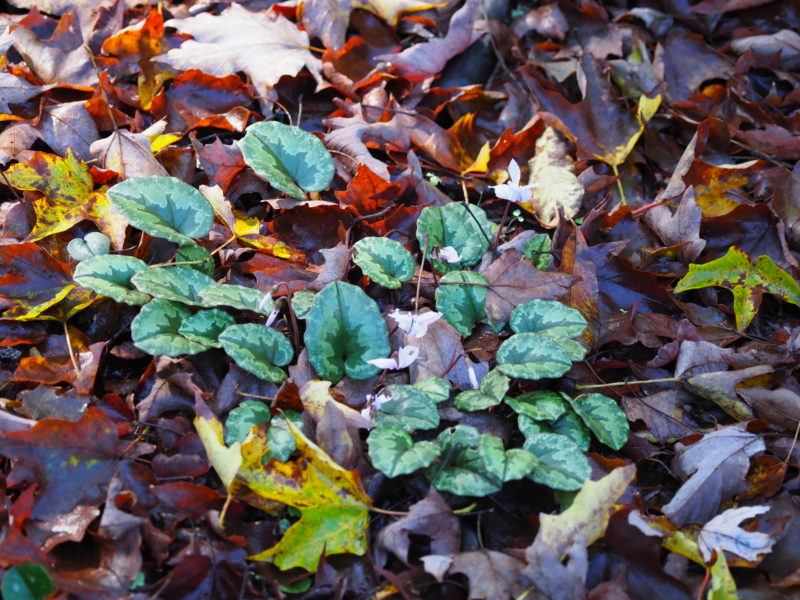 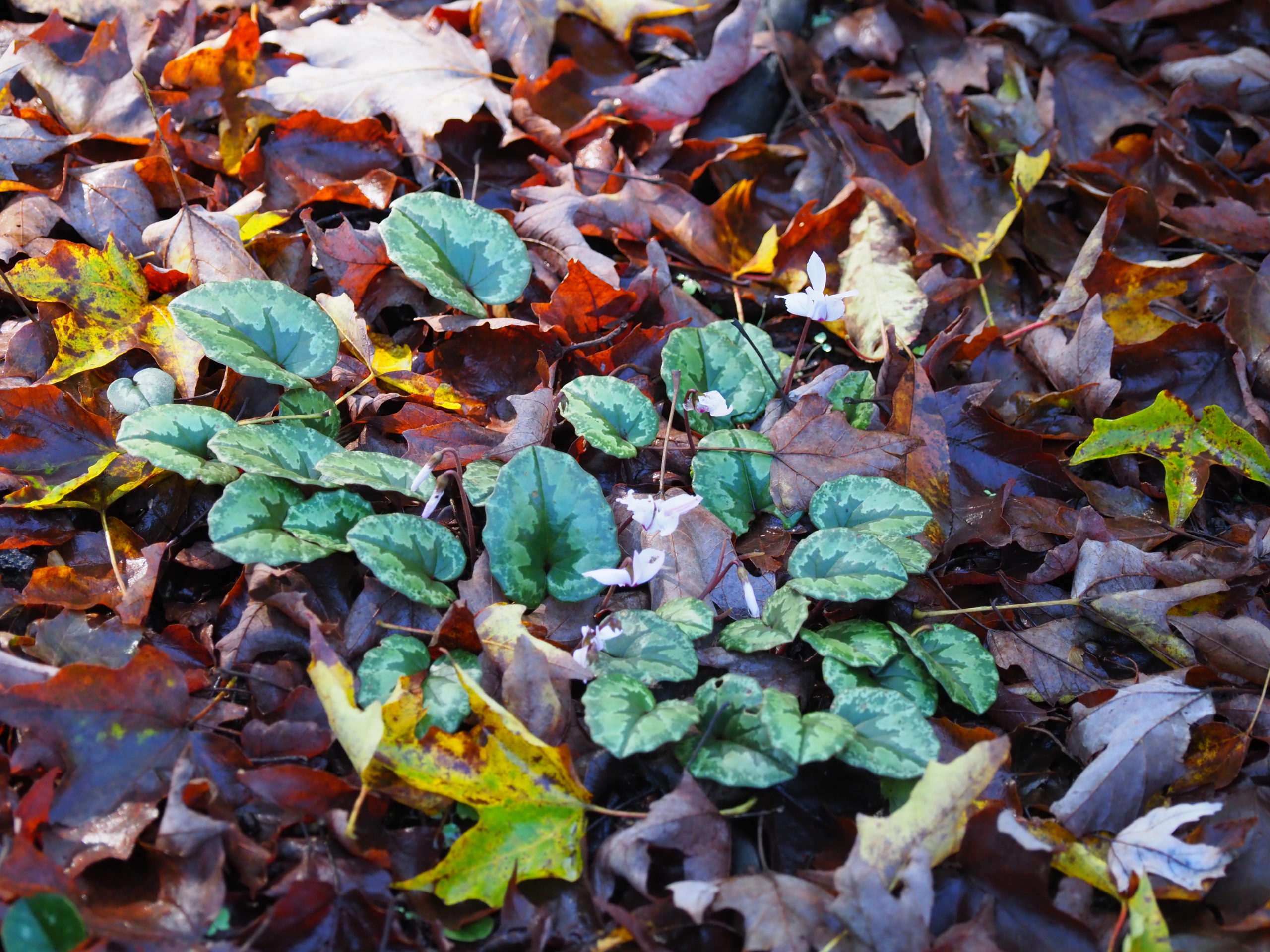 Hardy Cyclamen like this hederifolium species are fall bloomers and even the foliage adds an interesting element to the late garden. These are also growing at the base of a old maple tree. ANDREW MESSINGER 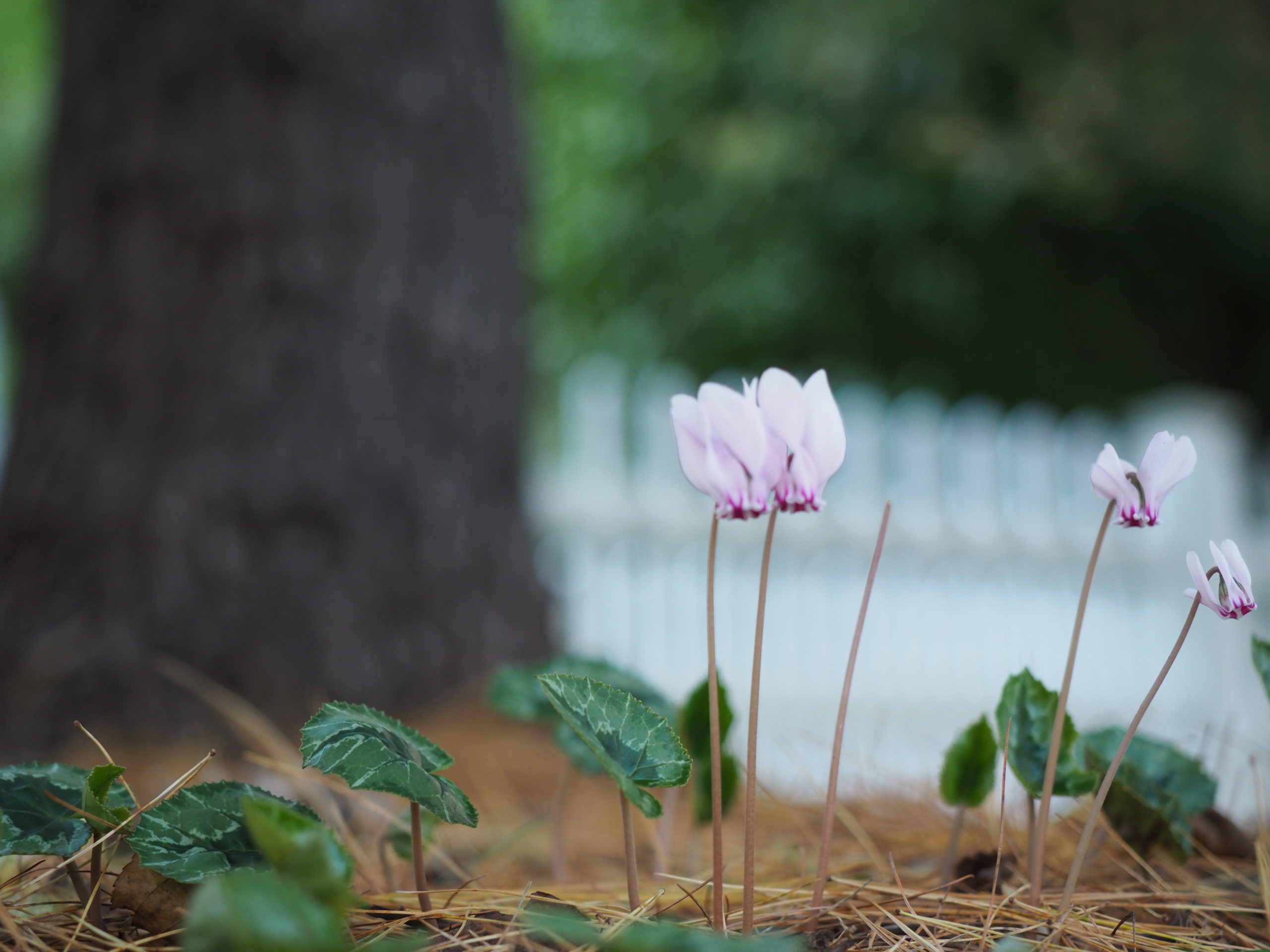 A pink form of Cyclamen hederifolium blooming at the base of a pine tree. These have been in place for 20 years blooming every September and October. Just plant them and they require no further care. Again, best done in mass plantings. ANDREW MESSINGER 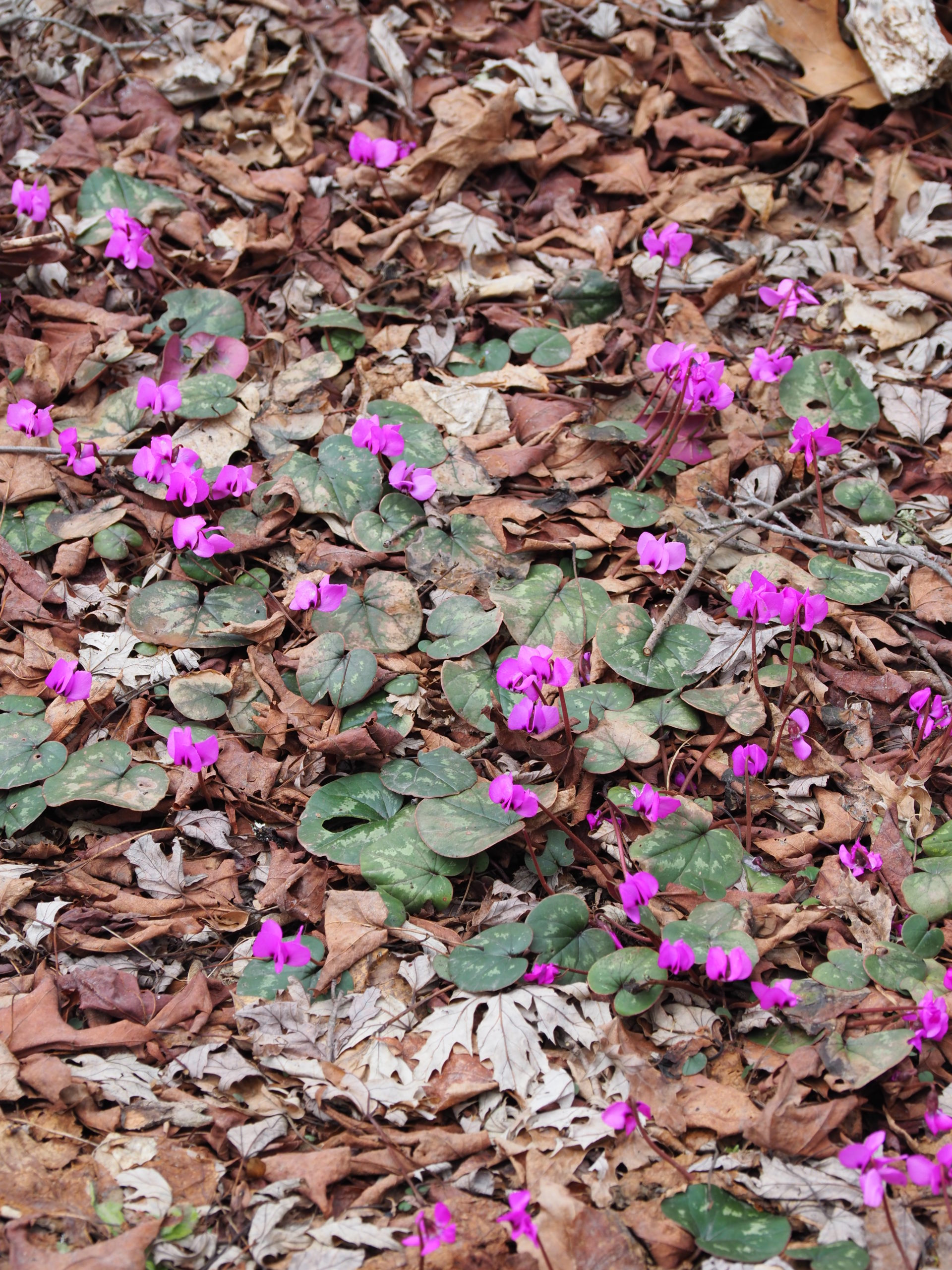 These hardy Cyclamen coum have colonized at the base of a 100-year-old maple tree. Blooming from March through April, they are one of the first spring flowers to appear. When planted en masse, they make quite a statement of spring. ANDREW MESSINGER 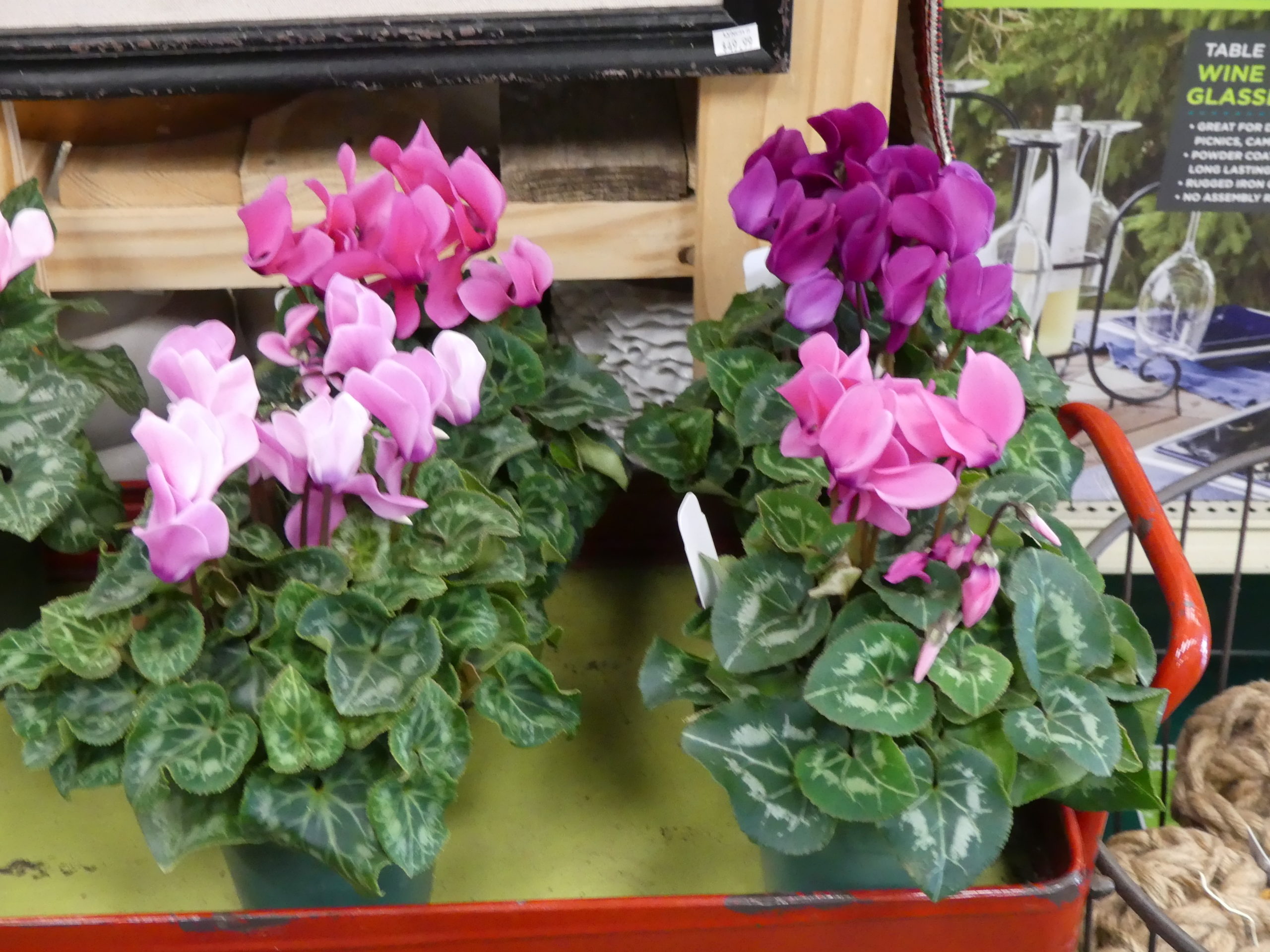 Florist-type Cyclamen are available now at garden centers and many supermarkets. They were recently found in pot sizes from 2 up to 8 inches. When kept cool, they’ll thrive indoors through late winter. ANDREW MESSINGER

This week, a plant that makes a great choice for indoor color from November to March, requires little care, is inexpensive and is sure to brighten up any spot you put it in.

But wait, there’s more. This plant has a close cousin that’s an incredible outdoor plant that will thrive and flower where no others will. No only that, it will grow at the base or under pine trees, under oaks and under maples. The plant is the Cyclamen — both the florist type that’s tender and the hardy type that flowers in the spring and in the fall.

Imminent disaster may have been true of florist Cyclamens grown 20 years ago, but there are so many new hybrids available in garden centers and florist shops that it’s time to take another look. The new ones will bloom indoors for months, love being on a cold windowsill and all they need is some water and fertilizer.

Members of the primrose family, both the florists’ varieties and the hardy (but much smaller and subtle) types have rounded, heart-shaped foliage on long wiry stalks and are produced from corms. The pink to white to reddish flowers are also produced on stalks that push them above the foliage with blooms lasting a week or so until new ones appear.

In most cases, the florist or tender types are only available from mid-fall through winter because they are easy for commercial growers to produce in greenhouses as cool crops with low overhead. For the same reason, most of us who buy or get them as gifts keep them for several weeks until we either subject them to too much heat (they love it around 50 degrees at night) or too much water. I always pick up a dozen in early November and keep them in a north-facing bay-type window that gets just a bit of afternoon sun. They start to fade in late March. At that point, I just put them on the compost pile, but the corms can be held over for several months of dormancy then restarted.

If we’re having family over for the holidays I simply give the plants more visible locations where everyone can enjoy them, but they always go back onto the cold north windowsill where they will continue to thrive.

Never let the soil completely dry out while the plants are actively growing, but never keep it wet. Once it reaches the dry side, water it well and not again until it dries slightly again. If you can master this regime, you are an accomplished green thumb and you get a golden leaf award. No, really they’re not difficult at all, and if you find that they wilt often you’re probably giving them too much light (and heat) or the corm is pot bound. It’s not unusual for a mature and well-grown corm to fill a relatively small pot in one season. If you are finding this to be true then increase the pot diameter by 1 inch next year and add more humus or high-quality organic matter (not peat) to the potting soil to increase water retention.

In a moment of horticultural madness in 1992 I decided to try the hardy species C. persicum from seed. The seed was planted in a small flat of about 12 square inches, about a third of an inch deep, placed on a heating mat, watered, and watched, and watched and watched. For two months, not a thing happened — or at least I saw nothing happen. But there was actually plenty going on.

Most seeds germinate by the seed coat breaking, the root extending into the soil and then the shoot extending out of the soil, in that order. With cyclamen, the seed coat is broken, then the primary root extends downwards, but no shoot develops for 4 to 8 weeks. During this time, a tiny corm only a quarter of an inch in diameter is being produced. When it reaches the appointed size, it sends up a single leaf, then another, then another, and all the while the bulb (corm) is getting larger and larger.

When the first leaf appears the tiny plant can be gently coaxed or teased out of the soil and transplanted to a small clay pot or larger flat and grown on for size. I started the seeds on May 19, did the first transplant on September 19 and most incredibly, had my first flowers on December 26 the following year in a 4-inch clay pot.

The seed for the perennial varieties are much easier to come buy in 2021, and you’ll find them at jelitto.com where there are 25 varieties. These are just as easy to grow from seed as is persicum. If you sow the seed in January you should be able to plant the small plants outdoors early in fall. Blooms may appear the following spring and or fall.

Don’t despair if the plants disappear in the heat of the summer. They often go dormant from late June to late August, when they reappear.

Cyclamen hederifolium (aka neapolitanum) is native to central and southern Europe, and the flowers often appear before the leaves do in late August or September. In spite of its somewhat warmer homeland, I’ve found it hardy in Southampton except when the winter has been cool and wet and the corms rot. This is why they do best in raised sandy soils. Occasionally, you can buy corms of this species in garden centers. If you find them they should be planted in July about 2 inches deep in partial to high, full shade.

The species purpurascens comes from a similar climate and has also proven to be hardy out here. Blooming in August and September, it produces fragrant, bright red blossoms under an inch long, and the rounded leaves are spotted with white. These corms should also be planted in July, but only an inch deep.

Another hardy species is repandum, which grows an inch taller than the two previously mentioned, to about 5 inches. The leaves are broadly cordate, about 5 inches wide and as long and they often have whitish markings on the topside while the underside is a reddish purple. The fragrant flowers are an inch and a half long and colored carmine red. A spring bloomer that likes a shaded home, it might like a slight winter mulch of oak leaves or pine needles. All the hardy species will benefit from being planted on a slight rise in loose to sandy soil so that corms sitting in cold, wet soil don’t become a problem.

You can also buy the plants or dormant corms from edelweissperennials.com/cyclamen for spring planting. Edelweiss has about three dozen varieties. These plants will not multiply and naturalize so mass plantings are the best option. They do set seed though, and if you’re lucky ants will seek out the seed, feed on the sweet outer coating then drop the seed in a new spot. I’m always surprised but pleased to find Cyclamen coum foliage popping up in my lawn near the parent plants about 10 feet away. Keep growing.

For all intents and purposes, the “growing” season pretty much came to an end last week with freezing temps noted in Southampton west to Westhampton in the morning. At this temperature, the leaves on Ginkgo trees will start to drop en masse, and the most tender garden plants will suffer. On the other hand, hardy chrysanthemums, roses and hardier late-season bloomers like perennial geraniums will continue to bloom. It is a warning, though, to get your Dahlias and Cannas out of the ground if you intend on overwintering them for next year.