Reunited: 'The Prompter' At Bay Street Feels Like Old Times For Schwartz And Feldshuh - 27 East

Reunited: ‘The Prompter’ At Bay Street Feels Like Old Times For Schwartz And Feldshuh 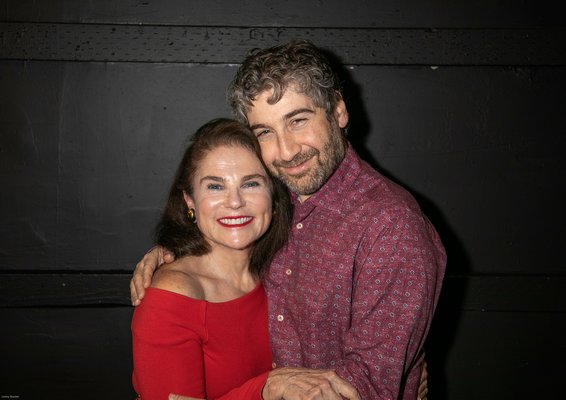 In 2003, a production of “Golda’s Balcony,” William Gibson’s one-woman show about the life and politics of Israeli Prime Minister Golda Meir, opened on Broadway at the Helen Hayes Theatre. The play starred Tovah Feldshuh as Meir and it ran for 493 performances, making it the longest-running one-woman show in the history of Broadway. The director of that production was none other than Scott Schwartz, Bay Street Theater’s current artistic director. Now, Ms. Feldshuh and Mr. Schwartz are teaming up again as actor and director, this time in Sag Harbor for the world premiere of Wade Dooley’s play “The Prompter,” which opens Bay Street’s Mainstage summer season on Tuesday, May 28.

The two-person comedy was read as part of last year’s New Works Festival at Bay Street and was so well received, it was selected to open the 2019 summer season. It stars Ms. Feldshuh as veteran actress Irene Young, who, after a four-decade absence from the stage, is returning to Broadway. But her faculties are not what they used to be, particularly her memory, so a young actor named Wade (portrayed in this production by Mr. Dooley) is hired to be her prompter and feed her the lines that she forgets.

Recently, Ms. Feldshuh and Mr. Schwartz took a break from rehearsals to sit down and talk about the play and their long and fruitful partnership on stage. It’s a relationship that also includes a 2011 Dallas production of “Arsenic and Old Lace” in which Mr. Schwartz directed Ms. Feldshuh.

“Our relationship has been phenomenal since the beginning. One of the reasons is Scott was a psychology major at Harvard,” Ms. Feldshuh said. “If I may be so bold, I chose him as my director for ‘Golda’s Balcony.’ I had director approval—I chose him above all others. Rarely have I seen a man who is that young and that evolved.

“He has the disadvantage of being the son of a legend,” added Ms. Feldshuh, referring to Mr. Schwartz’s father, musical theater lyricist and composer Stephen Schwartz. “He’s not sick, not crazy and uses no cane—at least to my knowledge. He chooses reflections of himself for his companies … He is reflexively empowering to people. It’s a skill. None of us get what we want all the time, but I’ve never seen him lose it when he doesn’t get his way.”

Their relationship now stretches back more than 15 years. Mr. Schwartz noted that as a young director on “Golda’s Balcony,” he found that working with Ms. Feldshuh was an extremely educational experience.

“We worked hard on the text for a long time and worked with William Gibson, the late playwright, to get it into a shape we were comfortable with,” Mr. Schwartz recalled. “Once we got through that, we had the set designed, and on the first day of rehearsals, Tovah said, ‘Would you please let me try this out and don’t tell me anything yet?’

“I was a little surprised, because that’s not something I’ve heard an actor say,” he added. “But I understood she wanted the opportunity to experience the script without a filter to see where her instincts led. I’m an instinctual director and think I’ve become more so since I’ve gotten older. I do a lot of planning and thinking, but once I’m in a rehearsal room, I forget it all and see what happens.”

What happened with Ms. Feldshuh in “Golda’s Balcony” is that by allowing her the freedom to explore the space as the character early on, she discovered a crucial way to tell the story. Because the play is not sequential but rather leaps forward and backward in time, and sometimes even toward lateral associations, organizing it in a way that can be comprehended by the audience is a challenge. Ms. Feldshuh’s early explorations led to a solution in which she used a platform on the stage when the script referred to current-day events and would step off the platform when the play delved into events from her memory.

“One thing I adore about Tovah is, every day I’m working with her it’s always about the work, and that’s how I feel also,” Mr. Schwartz said. “Tovah is so passionate about telling stories and telling the truth on stage, and doing it in exciting, theatrically and sometimes funny ways. Every moment we spend together in rehearsal is making the work the best it can be.”

Though “The Prompter” is a comedy, the reality behind the laughter is a painful one for a character like Irene. Putting oneself out there on stage for inevitable judgment can be hard enough for someone who is young and beautiful. For a mature actress, the rejection and dismissal that age often brings can be truly devastating.

It’s a reality that hasn’t escaped Ms. Feldshuh’s attention. She admitted that last week she found herself crying when she woke up thinking about her character, Irene.

“I tried to figure out why I was weeping, and I realized: she’s at the end of the line and doesn’t want to leave the parade. She’s a solo star and doesn’t want to be a falling star,” Ms. Feldshuh said. “She can’t believe she can’t remember the lines. As funny as it is, it’s a terror for the actors. My own processing for retention of new information is slower than it used to be. You go from your 20s memorizing seven or eight pages overnight when you’re on a soap, to it being a slow-moving process.”

“But the work is probably better than it’s ever been,” she added. “You wake up in the morning, hope to be a decent human and have a higher purpose, and you die hopefully at 90 or 100 having made a contribution.”

Ms. Feldshuh explained that an actress in need of a prompter is like an able-bodied person suddenly being offered a wheelchair. It’s a poignant point of life that few of us escape and one that she has seen first-hand while ushering her mother through the final years of her life.

“Now, I’m watching myself and my husband. He’s now in his 70s, I’m in my 60s, but we’re still going full tilt,” Ms. Feldshuh said. “This play is teaching me about the end of life. In one speech in the show, Irene says why I haven’t been on the stage—I haven’t been asked.”

Though the truth of Irene’s situation as an actress nearing the end of her career is somewhat tragic, Mr. Schwartz emphasizes that “The Prompter” is still a comedy, and together, the characters of Irene and Wade take a wild ride together.

“Irene is a diva with a capital ‘D.’ She has quite the ego and doesn’t want to admit she’s failing. The young guy gets thrust into the situation to save the day, and at one point, they are literally dancing, which is a metaphor as well,” he said. “In rehearsal, one of the things that’s been delightful is that because Tovah is rather short and Wade is quite tall, when they stand next to one another it’s a comedy duo.

“These serious ideas are framed by this wonderful comedy. One of the things I hope Tovah would accept is that she is an amazing comedienne.”

As is the case in comedy, there is often a liberal dose of truth and tears behind the smiles.

The world premiere of Wade Dooley’s “The Prompter” opens Tuesday, May 28, at 7 p.m. at Bay Street Theater in Sag Harbor and runs through June 16. A “Pay What You Can” performance will be offered on May 28. Tickets go on sale that day at the box office only beginning at 11 a.m. Other special offers include free Sunday matinées for students, “$30 under 30” tickets and “$20 under 20” tickets. “Talkback Tuesdays” with several cast members will be offered on June 4 and 11. Call 631-725-9500 or visit baystreet.org to purchase.