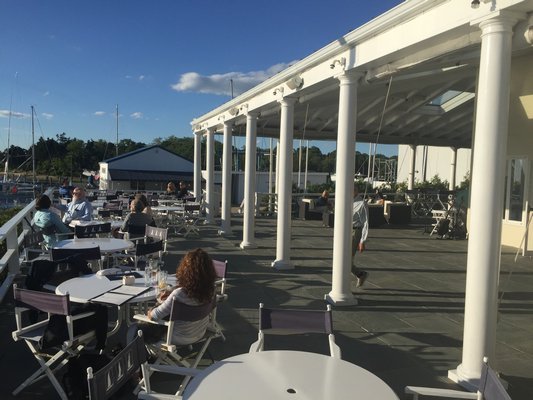 East Hampton Point's breathtaking sunsets and sprawling outdoor dining decks will be run by the crew from Moby's this summer.

The last month or two, for those in the South Fork restaurant industry, have been filled with upheaval, excitement and some head-scratching.There have been some very disappointing shutterings, some exciting newcomers, and some revivals that are leaving a lot of gastropods with high hopes for the coming season. As usual, a lot of the action is focused on East Hampton, which has long had the most dynamic dining-out scene on the South Fork, by far.

I’m not sure what should be seen at this stage as the biggest news of the coming summer. Is it the world’s best restaurant returning for another go at the big Amex bills of Hamptons hotshots? Is it the one-time best restaurant in the Hamptons being taken over, finally, by a seasoned and skilled operator? Or is it even just one of the most imaginative kitchen crews in the area opening up a takeout joint that is sure to have a menu of eclectic grab-and-go bites?

Personally, I think the most promising change is the former Moby’s crew taking over the sprawling decks of East Hampton Point. In the late 1990s, EHP was the single best all-around dining experience the Hamptons has ever known. Chef Gerry Hayden’s food was outstanding, the waitstaff was as sharp as a large seasonal crew could get, thanks to B.J. Calloway and Caroline Scarpinato’s fastidious service sense, and the views were, of course, the views.

But since those days, it’s been a long and bumpy downhill road from excellence to respectability, to mediocrity, to disappointment, and I think that a new crew of savvy restaurateurs taking over will help things immensely.

First off, they will make the financial investment that such a behemoth of a space needs. Of late, the owners of EHP, land rich but cash poor, had been throwing a half-assed effort at putting on a good show. A constantly new crew of chefs and managers were thrown into the place just a week or two before they were expected to open—which, in a place as big as EHP, is like giving command of the Queen Mary to a few random sailboat owners you met on the docks and asking them to steer her across the Atlantic in winter.

And the results were barely kept track of, other than making sure the wedding bookings were covering the bottom line. It was a doomed formula, and finally contracting for new management was a very good move.

So, now, in comes Moby’s ownership, who for two years at the old Spring Close House had run a popular and hip Italian-ish joint that was sort of more interested in the social nightlife scene than the dining scene but still pumped out some pretty good food. With a menu of crudos, pizzas and pastas, and safe stand-by meat and fish dishes—combined with great sunsets and outdoor dining—only the weather gods are likely to be able to dampen this new venture. I literally can’t wait to go.

Moby’s is available to move into EHP because they were booted before last summer from their highway-side spot by the owners of Eleven Madison Park, which had only weeks earlier been dubbed the world’s best restaurant on the S.Pellegrino 50 Best list.

Their city place, at the time, was undergoing a $10 million renovation, and the crew needed something to do for the summer. So they put on a cheffing and serving show with $75 fried chicken and impressionist lobster rolls that drew crowds big enough to lure the owners back for another go this summer.

Of course, now the city machine is back up and running, and the giant staff of skilled chefs and waiters are back at work where they are crucial to maintaining the restaurant’s top ranking. So, what will this summer bring to East Hampton?

Certainly, the likes of a celebrated chef-manager team like Eleven Madison Park’s Daniel Humm and Will Guidara are capable of training a staff both in the front and back of the house that can put out a high-quality product. But I would guess—because I’ve seen it before—that they are going to get a crash course in the hurdles of mustering a staff, particularly front of the house, that can deliver the level of service that they, and their high-paying customers, are going to expect from a place with such pedigree. Ask Tom Colicchio how that worked out at Topping Rose House, which didn’t carry anything like the expectations one would find $75 fried chicken saddled with.

Again, it will be an interesting industry case study—and another place I can’t wait to try.

In terms of first-time restaurants this coming season, the biggest news is the arrival of Il Mulino in Wainscott, where they will replace Osteria Salina.

I’m sorry to say that I am not at all surprised at Osteria not making it in that giant building. Their food was decent and the large-plate, almost family-style format probably had a certain appeal. But they had struggled to fill tiny 95 School Street and always seemed to be outkicking the coverage with the move to an even bigger space.

But on to new horizons. As the newest cog in a mini-chain of sleek, modern Italian restaurants, Il Mulino’s move east is quite reminiscent of Pino Luongo’s opening of Sapore di Mare way back in the late 1980s. He was the first Manhattan restaurateur to open a satellite in the Hamptons and brought a number of skilled chefs to town who stayed and made names for themselves: Paul Del Favro (who went on to run Nick & Toni’s, the Maidstone Arms and now Sag Harbor Market) and Robert Durkin (Karen Lee’s, Robert’s and New Paradise Cafe) both worked the hot lines at Sapore.

Also exciting is word that the super-talented and food-loving crew at Almond is opening a little takeout place just a door or two up the block.

I was quite happy to see that Elaia Estiatorio in Bridgehampton was bustling with sharply dressed customers on a recent Saturday night. Perhaps they were refugees from the evacuation of World Pie earlier that evening—a chimney fire in the wood-burning oven had closed the place, but it is back up and running now—but I have a feeling that this upscale Greek spot has simply found a following.

I’ll admit, I had been worried that this newcomer would be yet another short-lived but costly venture, considering that the old 95 School Street spot has had a run of flops in the last decade or so, and that food with the slightest hint of ethnicity seems to get a tepid reception at best from Hamptons snoots in general.

The Berger Babe and I had wandered in on one of their first nights open last year and, despite our love of Greek food and the super-attentive service we got from the manager and a bartender, we left somewhat underwhelmed by the food when balanced with the considerable price tag.

But if Elaia has stepped up her culinary game, she would not be the first restaurant to find her legs after a wobbly start—and the menu is about as interesting and delicious sounding as you could ask for amid the Hamptons’ homogeneity. I am pulling for them, and I promise that by the time I next lay pen to these pages, we will have sampled it again.

The most disappointing loss of the past offseason, for me, is the closing of Service Station, which I had thought was a superb, spruced-up replacement for beloved and affordable Nichol’s. Alas, high rents and a ridiculous fight with East Hampton Village over the outdoor seating drove Michael Gluckman, the undisputed king of “former” restaurants in the Hamptons, and his partners out.

A new tenant appears to be lined up for the summer, so, hopefully, they will put together a package that keeps that place on the map for a while.

To the west, Westhampton Beach’s lone truly fine-dining juggernaut, Starr Boggs, is rumored to be on the auction block after this summer, as Starr himself looks to fully retire. That would be a great loss for a town that has had a hard time attracting skilled restaurateurs, for some reason.

It is looking to be a summer worth making the rounds all over the Hamptons, so be sure to make your weeknight reservations.

I’ll have the salmon.

Southampton Village hasn’t really been the center of the restaurant industry out here since the ... 26 Feb 2019 by My27east

A Cold Off Season Looms

Off The Menu: The Most Important Customer

Something odd is afoot in the restaurant business these days it seems. Things are way ... 23 Jan 2018 by My27east

Lobster In The Rough

I sat recently at a restaurant on the water in Hampton Bays, dutifully shredding a ... 22 Aug 2017 by My27east

Too Much Primp And No Prep In Resto Biz

This Summer Could Be Epic On The Hamptons Restaurant Scene, For Better Or Worse

Sharpen your wine openers, waiters. Oil up the wheels on those guéridons, bussers. Organize the ... 13 Mar 2017 by My27east

I just love what the Hamptons has become in the wintertime.I grew up in Manhattan, ... 23 Jan 2017 by My27east

Some Still Missing The Point Of Restaurant Week

It has been six years since I last wrote about Restaurant Week. Why? Because nothing ... 7 Nov 2016 by My27east