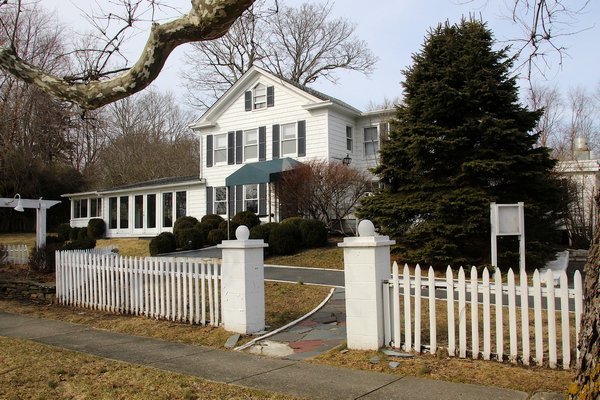 Southampton Village hasn’t really been the center of the restaurant industry out here since the days when John Duck’s was the place to go on a big night out. The nouveau riche downtowns of East Hampton, Bridgehampton and Sag Harbor have anchored the gastro scene over the last 20 years with destination spots like Sen, Bobby Van’s, and Nick & Toni’s.

Other than La Parmigiana, Southampton has had only a couple of real draws in those years: George Martin and Savannah’s. Yes, it is shameful that the Plaza Cafe has not become a draw for well-heeled gastrophiles from all over Long Island, but such is life in a fickle business.

For most of the last few years, Red Bar was really the village’s only solid, mid-level fine-dining spot, and since its sudden closing, along with its sister joint, Little Red, last fall, Southampton has found itself in something of a restaurant crisis.

Regardless, Southampton has its dining scene. The casual, family restaurant supply is doing okay—better than a lot of other hamlets are, if spending less than $50 per person for a two-course, sitdown dinner with an adult beverage is higher on your priority list than whether the foie is torchon, terrine or sautéed.

Shippy’s and Le Chef are rare throwback gems that I never want to see change a wink. Fellingham’s is the sort of everyman place with decent food at an affordable check average that other hamlets to the east are sorely, sorely lacking.

And, at the very high end, there’s a nice little triad of European eateries in Tutto Il Giorno, Sant Ambroeus and Le Charlot to go along with the Plaza Cafe.

Beyond that ... (Insert sound of crickets here.)

The thing that stands out most about the Southampton restaurant scene is the glaring missed opportunities.

Never mind that there are a couple of places that already would be hits if they just improved their food a little (okay, a lot) or had a more front-and-center location (which really seems like the Plaza Cafe’s only shortcoming). But there also are some restaurant themes that are just begging to be brought to Southampton that it would be hard to imagine not being instant successes, if put together well.

The first is Japanese, which is so much of a force in American dining nowadays it seems shocking that a highway-side joint on the outskirts of town (formerly Mt. Fuji, now evolving into Show Win) and an awesome but tiny place a hamlet away (Suki Zuki) are able to sate the demand. I’ve been saying for years that a great chance was passed by the last time 75 Main was vacant and a quality Japanese place didn’t find its way in there.

But an even more glaring absence, beyond not having a Main Street sushi spot in 2019, is that Southampton does not have a steakhouse. In fact, it doesn’t even really have a good steakhouse-ish American grill type place that is basically the heart of fine dining in America, now that Red Bar is (presumably) gone.

Steakhouses and their like are owning the restaurant scene elsewhere these days. Long Island has a bevy of killer, modern, ultra-cool and ultra-high-end steakhouses in Tellers, Blackstone and Insignia. None of them is anywhere near the Hamptons.

Part of the reason for this missed beat might be the cost of real estate out here. Steakhouses, the casual observer may not realize, are not big money-makers on their own, in the sense of their profitability, because beef is particularly expensive and has a low profit margin, even at the high prices you see in steakhouses. (Italian food is at the other end of this spectrum, and you may take note of their ubiquity). The $21 sirloin at Fellingham’s on Friday nights is definitely losing Joe and Millie money to put on the plate, but they are banking on you drinking a couple extra Buds and the goodwill of such a deal bringing you back another night.

So a steakhouse kinda needs to be big. Bobby Van’s in Bridgehampton is about the smallest true steakhouse you will ever see. In Southampton, there are really only a smattering of restaurant spaces that could handle a steakhouse and put enough butts in seats to make it a financial success. Two of them are currently occupied by 75 Main and Union Cantina.

So, it seems to me that opportunity is knocking at the delivery door of Union Cantina. Since they opened the Union Burger Bar in their back bar area (the legality of which has other restaurant owners scratching their heads), everyone seems to be asking when they are going to just make the whole place the Burger Bar.

It’s not a far-fetched question. I like the Mexican food at the UC and it seems to be doing okay on the restaurant side anytime I’ve been there, but they clearly aren’t killing it. (In the restaurant business out here, if there aren’t people waiting for tables on weeknights in the summer and weekends in winter, you aren’t making enough money.)

So the owners would be fools if they aren’t thinking about how to have the tables as full as the taproom on more nights.

The concept they’ve employed in the Burger Bar is definitely a cool one and something not really seen locally since O’Malley’s giant burger menu decamped from its last local spot (a retreat I’ll never figure out).

But I don’t know that a mostly burger joint is going to hold attention through the dinner hour quite enough to justify dedicating a whole 120-seat restaurant to the concept in this day and age. A steakhouse sure would, and what a perfect accompaniment for the concept they already have on the grill—Bowden Square Burger Bar at lunch, and Bowden Square Steak, or whatever they want to call it, at dinner.

While they mull that over, there is certainly a ripe opportunity for someone to hop into the Red Bar space if it is not, in fact, going to reopen. That spot is not perfect by any means. It basically has no bar, other than the sliver Patrick O’Donoghue made way more of than what could be expected for several years. But if someone were to get it up and running by Memorial Day, some of the summer regulars may not even notice!

Some other morsels from the industry:

• The former “World’s Best Restaurant” side-gig/experiment EMP Summer House is over. Eleven Madison Park has gone to Aspen and other places and is probably not relishing trying to find housing in the Hamptons for its staff for another summer (or figuring out how to light its outdoor areas under the ban on string lighting in East Hampton).

• The gastro wonder twins of Almond, Jason Weiner and Jeremy Blutstein, are parting ways after two years of glorious, Instagrammable food geekdom. The always restless Blutstein is taking over the new restaurant at the old Montauk Yacht Club, which now has a big ol’ mess of ill-considered marketing names. It’s got to be a blow to Weiner’s time away from the office, but I wouldn’t expect the eagerness of the menu’s innovations to flag much, and we’ll all benefit from another restaurant boasting a talented and imaginative chef instead of one place hogging two of them.

• La Superica has a new tenant, in the form of its original owner, Jeff Resnick, and is getting a makeover. Those champing at the bit for the old standby to return may be disappointed in the long run, but perhaps an homage or two to Pedro and Nairobi will find its way onto the menu.

• And there’s a new Mediterranean restaurant, apparently with a bakery adjunct, going into a back-street space in Bridgehampton that sounds like it could be an interesting addition to the hamlet’s already robust restaurant, and bakery, offerings.

I’ll have the salmon.

A Cold Off Season Looms

Off The Menu: The Most Important Customer

BY HAMILTON BERGERThe last month or two, for those in the South Fork restaurant industry, ... 30 Apr 2018 by 27east

Something odd is afoot in the restaurant business these days it seems. Things are way ... 23 Jan 2018 by 27east

Lobster In The Rough

I sat recently at a restaurant on the water in Hampton Bays, dutifully shredding a ... 22 Aug 2017 by 27east

Too Much Primp And No Prep In Resto Biz

This Summer Could Be Epic On The Hamptons Restaurant Scene, For Better Or Worse

Sharpen your wine openers, waiters. Oil up the wheels on those guéridons, bussers. Organize the ... 13 Mar 2017 by 27east

Some Still Missing The Point Of Restaurant Week