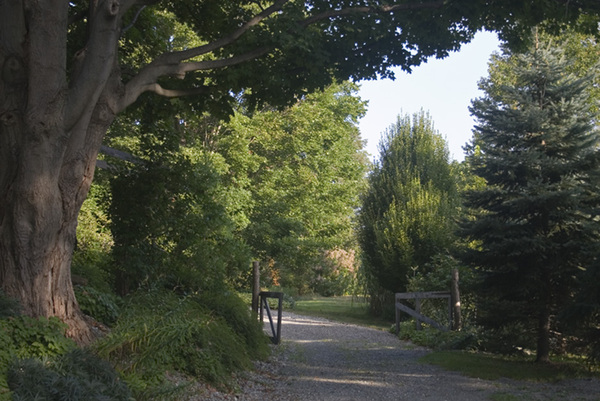 The entrance to the Brine Garden in Pawling, New York. River birches planted at different times create the appearance of a natural grove with different-sized trees. 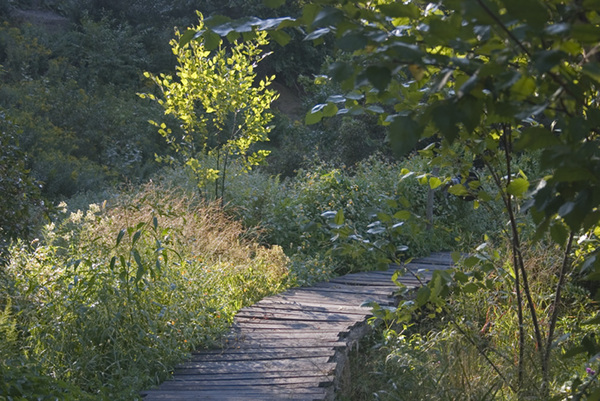 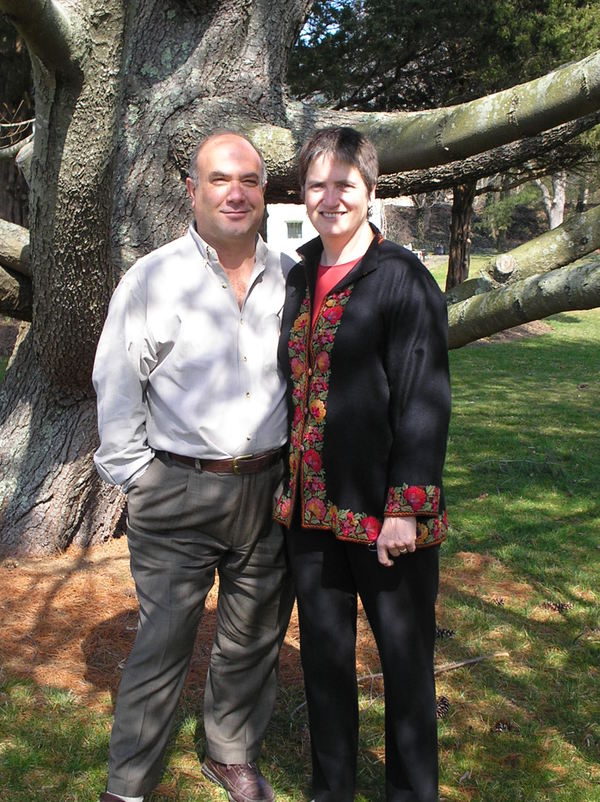 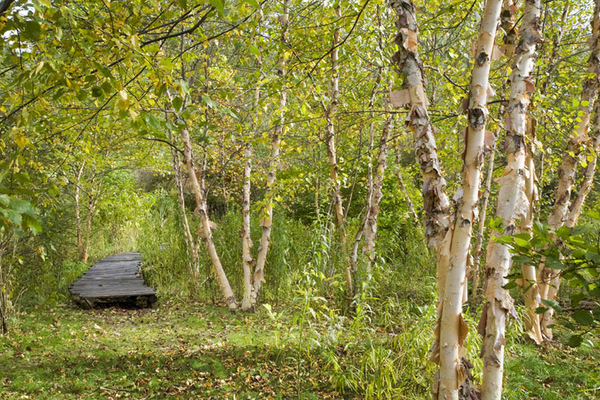 The Long Bridge at the Brine Garden in Pawling, New York. COURTESY GARDENLARGE.COM

Gardeners interested in a more natural look for their landscapes were treated to an inspiring and insightful talk on Sunday afternoon at Bridge Gardens in Bridgehampton by Duncan and Julia Brine.

The principal designer and his wife and partner in the Pawling, New York-based Garden Large Naturalistic Landscape Design said that they believe that a property—whatever its size—should be treated as one garden.

A naturalistic garden, which the Brines advocate, aims to replicate an environment that exists in nature. Mr. Brine said that he sees this kind of garden as a way to preserve the identity of a landscape and for the gardener to both give back to and benefit from nature. His talk focused on the process of making a naturalistic garden personal and unique to each site.

“It’s your approach to your place, a very specific place,” he explained.

The first step in the process involves acquiring a sense of the region and the characteristics of your particular property, what he calls “the givens.”

Mr. Brine used his own family’s property in Dutchess County to illustrate the design process. The Brines live on 6 acres, on land that

was formerly a large dairy farm. Their property borders the Great Swamp—the second largest swamp in the state.

The “givens” for the Brines include wet areas colonized by phragmites grasses and drier places full of locust trees. The rolling terrain is sloped, with a stream meandering through it. There are views of distant tree-lined ridges, but also a highway close by.

With an understanding of the givens of the property in place, the next step in creating a garden is to respond to those elements. The existing plants offer clues to the conditions on various parts of a property, and the goal of the design is to work with those conditions to enhance the natural landscape. Microclimates—the environment in small areas—vary across a property and, said Mr. Brine, “are important to identify and take advantage of.”

The Brines responded to their givens in a number of ways. First, they made paths to wind through the land. The paths curve and meander to encourage curiosity and exploration.

“I hate lines in landscape,” declared Mr. Brine. “Because you don’t see lines in nature.”

The paths vary in width and are surfaced with gravel sourced from a local quarry. The gravel works as both path surface and mulch in planting beds.

The couple said they find the gravel both aesthetically pleasing and practical.

After paths were in place, the Brines planted big specimen trees to create structural elements.

For Mr. Brine, naturalistic landscape design responds to the native plants already in place. The landscape is understood as an environment, the plantings part of a whole—a bigger picture than a traditional garden bed or border.

To create that picture the Brines use a variety of techniques.

One is to break some traditional design rules, but for a carefully conceived reason. The most important rule for the husband-and-wife team is to shake up perception by moving the background to the foreground. The usual way of planting shorter plants in the front of a garden and taller plants in the back, Mr. Brine said, “has nothing to do with nature.”

He added that gardeners miss a lot of the finer qualities of plants that way.

“Having the background right up in your face changes everything,” he said. “It lets us notice details we’d otherwise miss.”

For example, Mr. Brine noted that planting a larch tree (

) in front of a birch caused him to really see the fluid shape of the larch branches and notice the texture of the bark.

The Brines said they lay out their pathways to provide both close-up and distance views of the same plant for a more intimate and enlightening experience of the garden.

Because masses of wild plants, such as goldenrod and phragmites, had already inhabited their land, the Brines responding by planting masses of the plants they wanted to introduce, such as the arctic blue leaf willow (

). Then they paired a tall vertical grass (

) with the rounded forms of the willow for contrast.

Although the Brines plant in masses, they start with just a few plants to see if the species will thrive in the location. They said they never replace a plant that fails. Instead, they look for an alternative.

Mr. Brine also layers plants to bring out their beauty. For example, a weeping katsura tree planted behind a silverbell (

) makes the small white flowers of the halesia stand out.

“Otherwise, they’d disappear against the clouds” he explained.

Sunlight also plays an important role in the garden, and placing plants to take advantage of sunlight is critical, he pointed out.

“Light is what makes a place magical,” said Mr. Brine as he showed a grove of locust trees that were thinned out to let more light filter through.

The Brines are sensitive to the ways light can be captured and used in the garden. Noticing how the light looks in the garden during different seasons and at different times of day allows them to incorporate light and shadow into the design.

Their garden in Pawling aims to reflect the spirit of the land, with the plants they use—both native and nonnative species—integrating with the indigenous flora, Mr. Brine reported. Signature plants such as Joe-Pye weed (

) are recurring elements through the garden. Sedges and low-growing fescues are used as no-mow grasses in some areas instead of a lawn.

For the Brines, the goal of a naturalistic garden is to, in Mr. Brine’s words, “idealize and partner with nature’s potential in a place.”

A large garden such as theirs can replicate the different ecosystems of slopes, and wet lowlands, the plantings visually integrating with views of their neighbor’s property and the distant ridgelines. On a small property, a naturalistic garden can’t invoke an entire ecosystem, but it can serve as a fragment of nature, a quotation of a natural environment.

The naturalistic garden is a place of subtle beauty rather than bold drama. But it can offer a refuge and respite for the senses. And because the plants are chosen to suit the givens, the garden will look like it belongs there, and the plants will thrive. It’s a low-maintenance, resource-conservative place that can nourish the gardener’s soul as it helps nature along.

The next talk at Bridge Gardens, “Green Garden, Green City: Modeling Environmental Sustainability and Stewardship at Brooklyn Botanic Garden,” with Scot Medbury, will be held on Sunday, April 1, at 1 p.m. For more information, visit peconiclandtrust.org or call 283-3195.

As eco-conscious homeowners consider how to curtail their personal contributions to climate change, they tend ... 27 May 2022 by Brendan J. OReilly

As Memorial Day weekend kicks off barbecue season, the Firefighters Association of the State of New York is offering tips to avoid accidents and injuries when using outdoor grills, whether propane or charcoal. The National Fire Protection Association reports that an average of 19,700 patients annually went to emergency rooms with injuries involving grills from 2014 to 2018, with nearly half of those injuries caused by fire or contact with hot objects. Children under age 5 accounted for an average of 2,000, or 39 percent, of the contact-type burns per year. And the association says grills were involved in 8,900 ... by Staff Writer

Form-based codes, a methodology for reinventing and preserving older communities as well as inventing new ... by Anne Surchin, R.A.

Asparagus is one of the few vegetables that we can grow that’s a real perennial. ... by Andrew Messinger

As the first year of the COVID-19 pandemic came to a close — and, with ... by Michelle Trauring

One sign of an accomplished gardener is someone who can use and understand three of ... 16 May 2022 by Andrew Messinger
×