Agents Will Do Just About Anything To Get Houses Seen 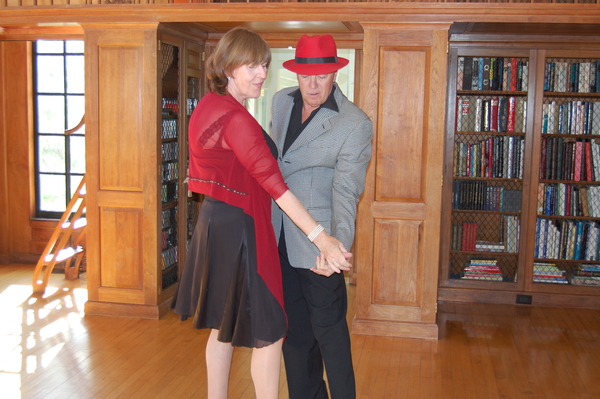 It’s never been easy to lure agents to an open house, he said. But times are even harder now, and listing agents are going to uncharted lengths in order to market their properties that are sitting unsold in a down market flooded with competition, he said.

That’s why, on Friday, October 28, Mr. Morabito enticed his fellow brokers with an offer they couldn’t refuse: free dance lessons with local instructor Alfonso Triggiani in a 19th-century ballroom, fully stocked with food and wine, nestled inside one of the agent’s for sale properties, located on Beach Lane in Westhampton Beach.

“The entertainment factor is really the up-and-coming thing,” Mr. Morabito said during a telephone interview last week. “It’s expensive to do, but you need to get the brokers inside there. You need them to not only come but to hang out and see what it is.”

Though the open house was meant just for brokers, some curious passersby popped in, too, he said. The guests joined more than 50 agents for lunch, white wine and champagne tastings, plus a spin around the dance floor, Mr. Morabito reported.

The trick is making the agents see something they hadn’t seen before, he said. The house that he was marketing during the dance/open house, a 10,000-square-foot estate, has been on the market for a year and a half.

“The brokers have a tendency to back off what they think they’ve known,” Mr. Morabito said. “What we did, we spiced it up. The ballroom, it’s to die for. It’s like stepping into another era.”

Corcoran agent, and attendee, Robert Murray said he was pleasantly surprised and quite impressed by the Enzo Morabito Team’s most recent open house.

“I’ve got to give him credit,” Mr. Murray said during a telephone interview last week. “I thought that was very good.”

Mr. Murray said he has been putting his own open house tactics to the test for a num-

ber of years, recognizing that it takes more to impress these days than ever.

“It’s just not the same old way of marketing anymore,” the agent said. “You have to come up with a little gimmick that is a little different to at least get somebody to the house. The inventory of homes for sale is so high that people have many choices. And I think it’s just a question of getting people to come to your home versus somebody else’s.”

Last month, one of Mr. Murray’s public open house gimmicks came in four flavors: vanilla, chocolate, strawberry and Chunky Monkey. The owner of the Westhampton Beach home where he held the ice cream social also happens to own the Ben & Jerry’s shop on Main Street in the village.

For every broker or potential buyer who visited, Mr. Murray scooped out free, generous helpings into Ben & Jerry’s cups from an ice cream cart parked outside the home.

“There was one broker with their customer who came by, who had actually seen the house before, and has since put a bid on the house,” Mr. Murray reported. “I don’t know if it was the ice cream hook or the open house that did it, or if they were just in the neighborhood at the time and had it in their minds to come back, but I’ll take the credit for it,” he added with a laugh.

Other tactics have run a higher cost, Mr. Murray said. Two years ago, he rented a high-end speedboat and showed customers different houses for sale from the water, he said.

“They were looking at houses in the $5 million-and-up range via a fancy yacht, versus just driving up to it,” he recalled. “I didn’t sell a house, but it was interesting to approach the sale of a house that way. Only in the Hamptons.”

Mr. Murray heard of a similar exploit that did land a sale, he said. The realtor, whom Mr. Murray did not name, showed off a Bridgehampton home to a wealthy client by flying him over it in a helicopter, he said. The over-the-top viewing worked.

But the standard way to draw real estate agents and brokers to an open house is by offering lunch, Mr. Murray said. Last summer, Barbara Feldman, managing director of Nest Seekers International East Hampton, applied the same logic to an open house garden party at one of her properties on Mecox Bay in Water Mill.

“Food always draws a crowd,” she said during a telephone interview. “People like food. People like wine. People like to go to an attractive house where they know it will bring an aesthetically satisfying type of environment, where it’s nice. Given a choice of parties, don’t you always go to the nicest one?”

Beau Hulse, principal of Beau Hulse Realty Group, also throws his share of parties—but not for open houses, he said. Through the summer, he partnered with banks and staging agencies to co-sponsor broker networking nights at local restaurants, including 75 Main and Tuscan House in Southampton, to rekindle communication in a challenging industry, he said.

There are no speakers, no competition and no pressure, Mr. Hulse said. The networking nights just give agents an opportunity to swap information about listings and buyers, new properties and old, without an ulterior motive like recruiting, he said.

The sessions, which have taken a hiatus for the rest of the year, will start again at the end of January, Mr. Hulse explained.

“It’s worked. We’ve been able to work with each other and do deals,” he said. “My original plan, because of what the industry was going through, was that we just needed a night to relax, have some fun with our peers and also be able to vent about the frustrations of the market, which has improved. It’s a support system for the brokers.”

But sometimes it seems that no tactic will work when it comes to getting agents out to a particular property. When all else fails in this market, Mr. Morabito said there is one final ploy: pay the brokers to stop by.

The agent had a particularly stubborn property in Orient that just couldn’t get any attention. So Mr. Morabito ordered about $3,000 worth of $2 bills and had a Buddhist monk in Centereach bless them for fortune and good luck, and advertised that brokers would receive the bills by attending the open house.

“Everybody walked in. We were loaded. There were about 100 of them,” he said, adding, “If I make a deal, it’s immaterial what I spent.”