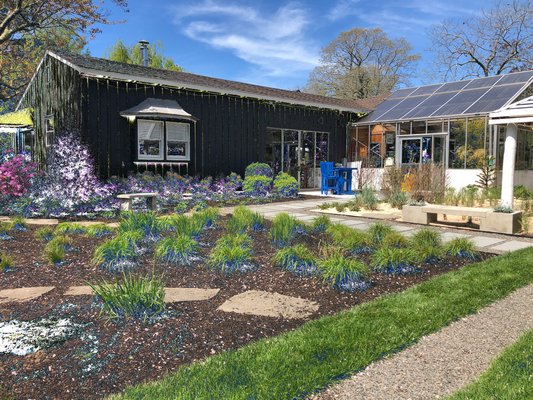 Groundworks Landscaping is launching its showroom at 530 Montauk Highway in East Hampton on Saturday, May 26. COURTESY GROUNDWORKS LANDSCAPING

It seemed like a no-brainer, Kim Hren said, to move her landscaping company to 530 Montauk Highway in East Hampton in 2013. Her father, Joseph Hren, was selling Jos. A. Hren Nurseries. Ms. Hren and her fellow Groundworks Landscaping co-founders Linda and Andy Silich were buying.

At that point, the decade-old landscaping team decided to try something new: retail. But after five years of Groundworks @ Hrens trying to make a name for itself as a place to buy luxury garden foliage, Ms. Hren said it was time to reinvent the company in January. Groundworks Landscaping is in the process of opening a showroom.

“We had started the garden center and the maintenance division,” Ms. Hren said. “We gave the retail a fair shot. It was tough for us. The business has changed. As you could imagine, garden centers like this one are so few and far between with the big box stores and Amazon taking business. It was a hard decision to make the decision to get rid of retail, but the showroom is our future.”

The company will still hold its annual holiday open house in December, and fall festival, pig racing and petting zoos in October, but for many on the South Fork, the landscaping company has been a go-to location. Since the beginning out of a small home office, homeowners would typically schedule a consultation to discuss what they would like to do with their property, create project designs and maintenance plans, and complete the project from start to finish.

“We still do not only big landscape jobs, but small plantings—it could be the front foundation of a house, could be some screenings that people need along a property line, could be a flower garden, could be planters on a deck,” Ms. Hren said. “It’s not just the whole thing or nothing.”

Ms. Hren said the new showroom allows homeowners to iron out the kinks in their projects by seeing and trying out prefabricated sets in the store.

“Little samples of our work, photos of our work, and then take them outside to the display gardens that are planted, like deer-proof gardens, shade gardens, seashore and beach planting, flower gardens, screening trees—we have all that planted out back,” she said.

And a lot of detail goes into each of the sets, she said. The company’s strategy has always been to be at the forefront of technology—using computer-aided design, or CAD, software. They used to pride themselves on supplying customers with highly detailed, two-dimensional images. But now, Ms. Hren said, they’ve upgraded to create 3D modeling images, which include animation and sound to give homeowners a more life-like concept of the project.

“We draw a 2D drawing, and it’s as simple as when you get your drawing going you hit a button and it pops up in three dimensions so people can see different views of their yard, and aerial views, and down at ground level. You get in close to a pool or a spa and hear water. You can put kids in there throwing balls in the yard with their dogs,” she said. “It’s really kind of awesome to walk someone through the entire drawing—their entire project.”

Groundworks Landscaping Showroom’s grand launch party with be at 530 Montauk Highway in East Hampton on Saturday, May 26. Most of the showroom’s theme will be directed at entertaining in outside gardens, which requires meticulous landscaping and an eye for exterior design.

“We want to bring the backyard back to people’s homes,” Ms. Hren said. “It’s getting busier and busier out here, and we feel like people really want to live in their backyard. They want the outdoor kitchen, and they want living spaces, and they want to have people over and show off their pool area … instead of dealing with the hustle and bustle.”