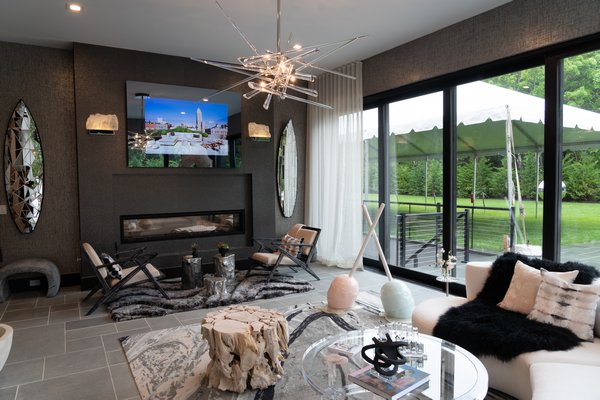 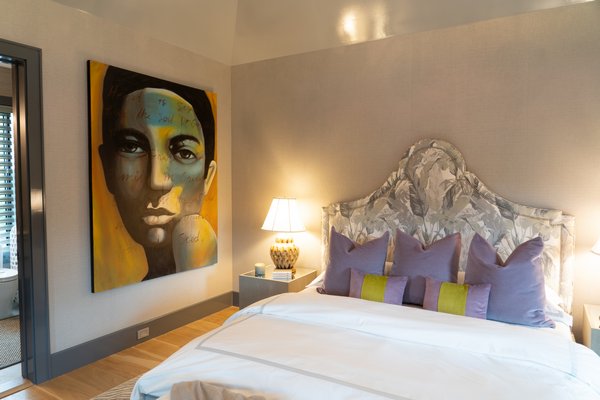 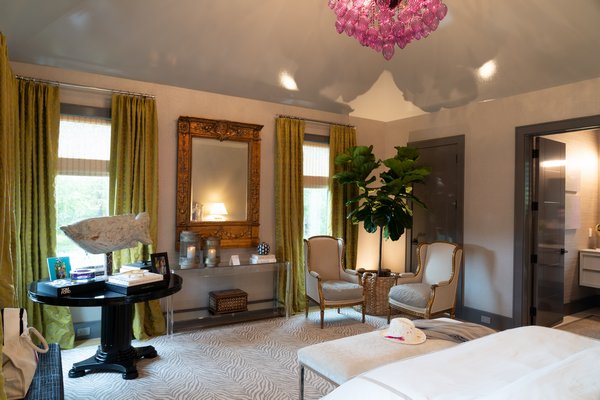 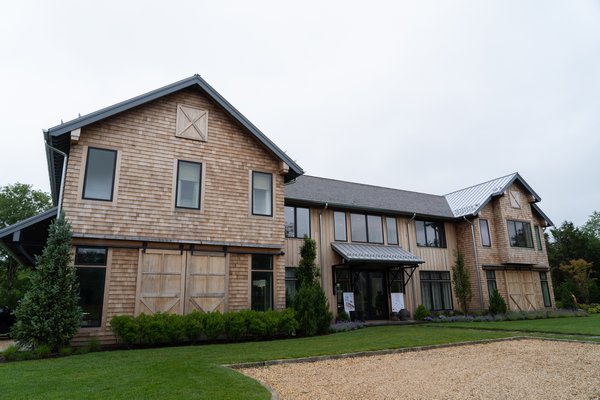 Holiday House Hamptons, an annual charitable designer show house located this year at 90 Wild Goose Lane in Water Mill, opened to the public on Sunday, June 23, to raise money for breast cancer research.The founder of Holiday House and a breast cancer survivor herself, Iris Dankner, brought together more than 20 designers to revamp the 12,500-square-foot house by All Seasons Contracting with unique styles that visitors could imagine themselves living in.

“This year I feel the house came out better than ever,” Ms. Dankner said. “When I’m doing designer show houses, what I think is important is to make it cohesive, and I select designers in these open spaces that I feel their work blends together.”

Elsa Soyars, an interior designer based in the Hamptons and New York, decorated the master bedroom with a new line from Cliff Young’s 50th anniversary collection.

“I designed the room according to what I was inspired by,” Ms. Soyars said. “And lately, I’m all about sexy rooms and bedrooms, especially masters.”

The silver-gray look and modern feel of the bedroom was taken further with metal-meshed lamps from Lorin Marsh, sheer drapes from De Le Cuona and a fireplace with faux finish by Eva Art & Design Inc. A wool and sisal carpet from The Carpetman keeps the room casual enough for the Hamptons, Ms. Soyars said. She also brought a picture of her mother, who passed away, to the room.

“She was a very strong lady who raised three daughters to farming as a widow,” she said. “She was a remarkable person.”

Melanie Roy, a residential interior designer, designed the solarium to have “beach glam,” as she puts it. Custom-made mirror mosaic surfboards with Ombre grout, a black and white photograph from Bob Tabor’s “Splash” series, crystals and stones bring the outside in, she said.

“I want them to feel inspired and kind of as if they’re encapsulated in the beauty of nature and the elegance of the Hamptons,” she said of Holiday House Hamptons visitors.

Located between furniture that is appropriate both indoors and out is a massive melting lollipop sculpture by artist Desire Obtain Cherish that brings playfulness to the house with its pale pink and blue colors, she said.

Amy Hill, an interior designer from Southampton who also does a lot of work in Palm Beach, said she decided to combine the upscale, European style of Palm Beach with the beachy and relaxed vibe of the Hamptons.

“We’re always designing rooms for everyone else,” Ms. Hill said. “So for me, I designed this room for myself and how I would want to feel.”

The bed from Emerson Bentley with muted palm fabrics from Thibaut is the centerpiece of the room. Ms. Hill said the English bump cloth drapes from Fabricut with a color between chartreuse and martini olive green brings the Palm Beach style to the room with the finishing touch of a purple chandelier from Ferguson.

Elizabeth Pash, based in New York City, named her room “Haven for Her,” devoting it to her childhood friend, Kathy Ann, who died of breast cancer.

“My idea was to create a haven for her, sort of a restful place where a woman can go to relax or read a book, write letters,” she said. “I just wanted it to be pretty and peaceful.”

The room had light blue-patterned, polygon-shaped wall coverings from Cowtan & Tout that matched the stitchings of bed linens from Jabbour Linens, the marble blue bedside lamps and the Lucite benches from Ms. Pash’s store, Elizabeth Pash Interiors & Antiques. A sisal rug from Stark, a pair of vintage rattan armchairs from Harbinger New York, and wooden writing table and chair from her store added a classic look to the room.

“I’ve tried to mix old and new, some antiques with some new pieces because I feel that that makes for an interesting interior,” Ms. Pash said. “I feel like one complements the other and makes for a really nice mix.”

Ms. Dankner designed the gym, which she calls a “wellness room.” Within the room, wooden sculpture-like gym equipment catches the eyes and a smaller CBD room with cannabis leaves patterned wallpapers makes it what the “ultimate wellness” would be, she said.

She also made sure the house had plenty of artworks and paintings on display including a 9-foot-long, 7-foot-tall oil-on-wood panel piece called “Someone We Know,” which is meant to “honor those who have fought the battle of breast cancer.”

“The beauty for me producing this is I get to meet the top, top editors and publishers down to the men and women who are sweeping the floor and painting the walls,” Ms. Dankner said. “And everybody has a story about how they’re touched [by breast cancer] no matter they’re young or old.”

Holiday House was founded 12 years ago to combine her passion for interior design and fundraising for breast cancer research, said Ms. Dankner, who is on the advisory board of the Breast Cancer Research Foundation. Now, in addition to the original, Holiday House NYC, there are Holiday Houses in the Hamptons and London.

“I just lost my mom to breast cancer, which I thought, you know, don’t I get a pass?” Ms. Dankner said. “I’ve been doing this for so many years. You’d think that I’d be spared breast cancer, my family, but it’s just made me hate the disease.”

“I despise it even more, so I will not stop raising money until we find a cure for breast cancer,” she added.

Holiday House Hamptons is open to the public daily until August 4 from 11 a.m. to 5 p.m. except Tuesdays and July 2 to 4. Admission is $40. For more information, visit holidayhousehamptons.com.

For centuries, the world has known one type of refugee: those who leave their homes ... 25 Jan 2022 by Michelle Trauring

The Science Of Seedlings