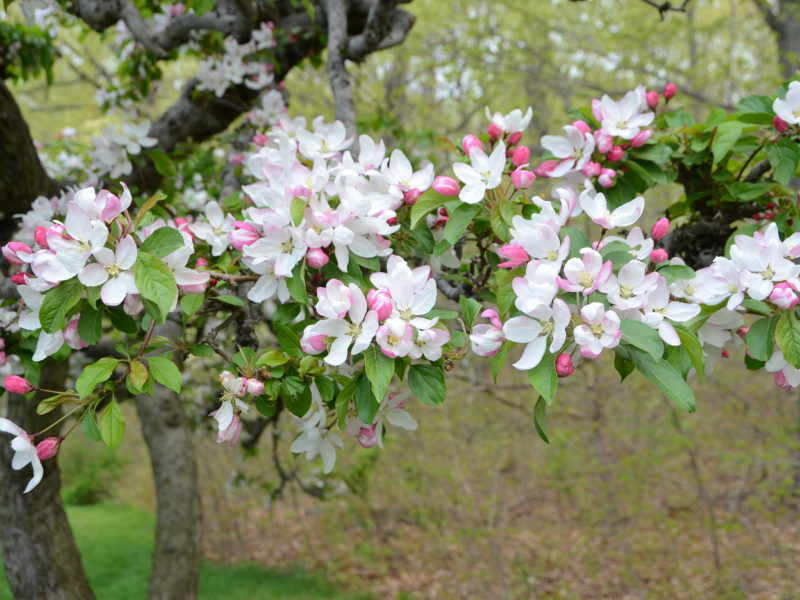 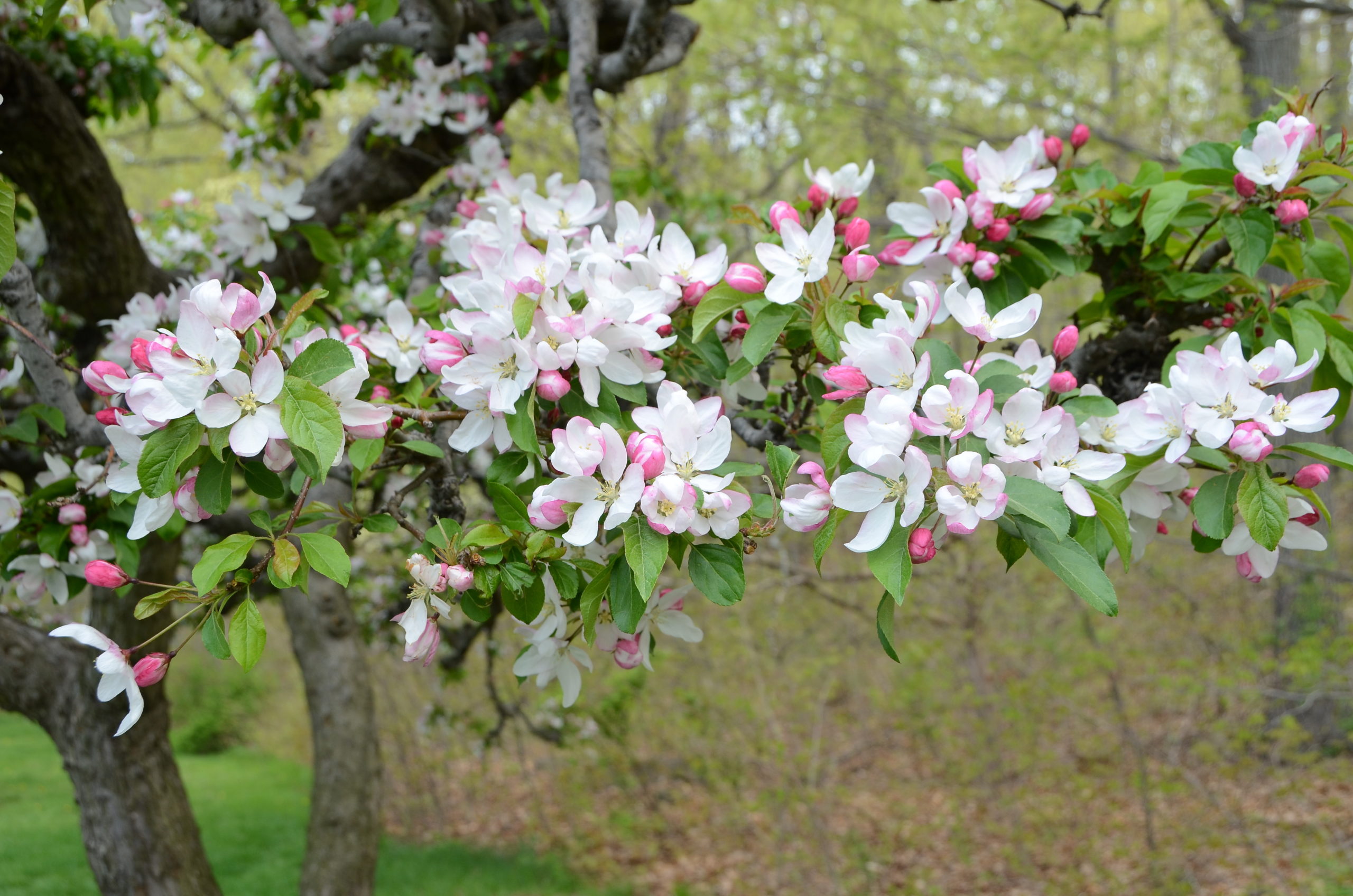 To get a crabapple branch like this to bloom indoors takes about four weeks, so a branch cut this week won’t be in full flower until mid-March. ANDREW MESSINGER 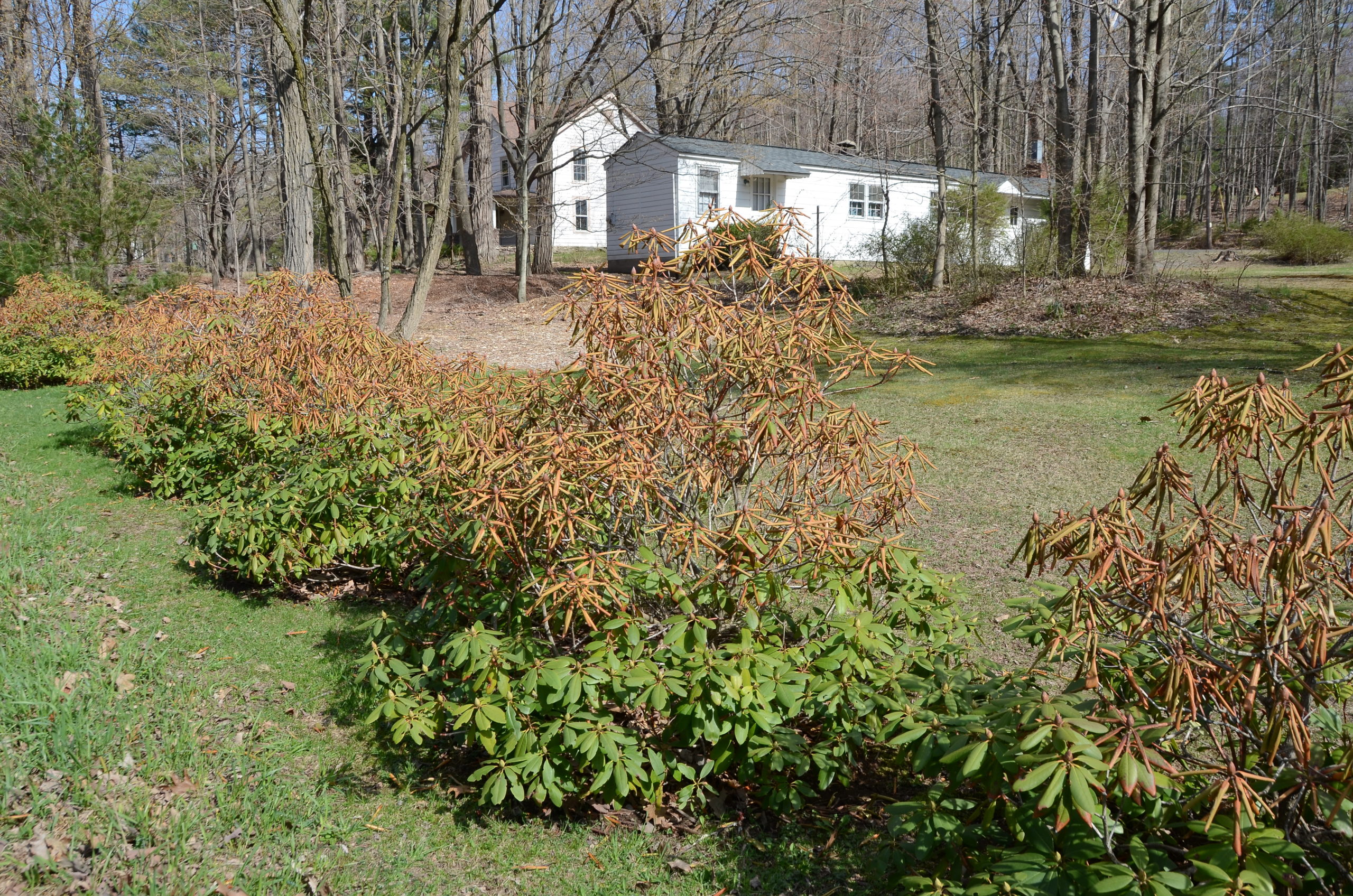 These rhododendrons show the depth of the snow in a very cold winter. The lower 3 feet were protected by the insulation of the snow. The upper portions took several years and some serious pruning to recover from the cold damage. ANDREW MESSINGER 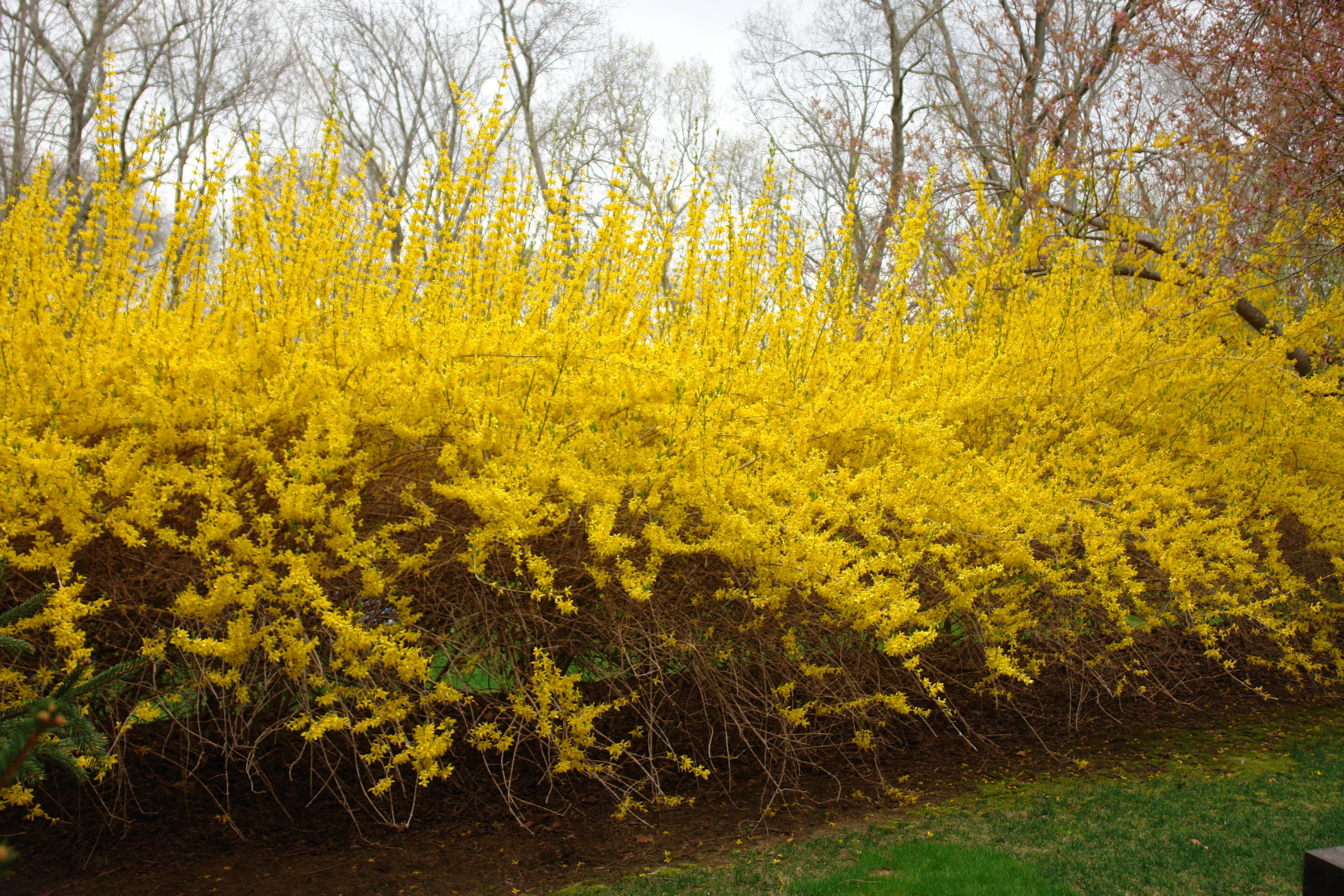 The tall and straight canes seen atop this forsythia hedge are the best to use for forcing. Forsythia canes take only two weeks to bring into color and are among the fastest. ANDREW MESSINGER 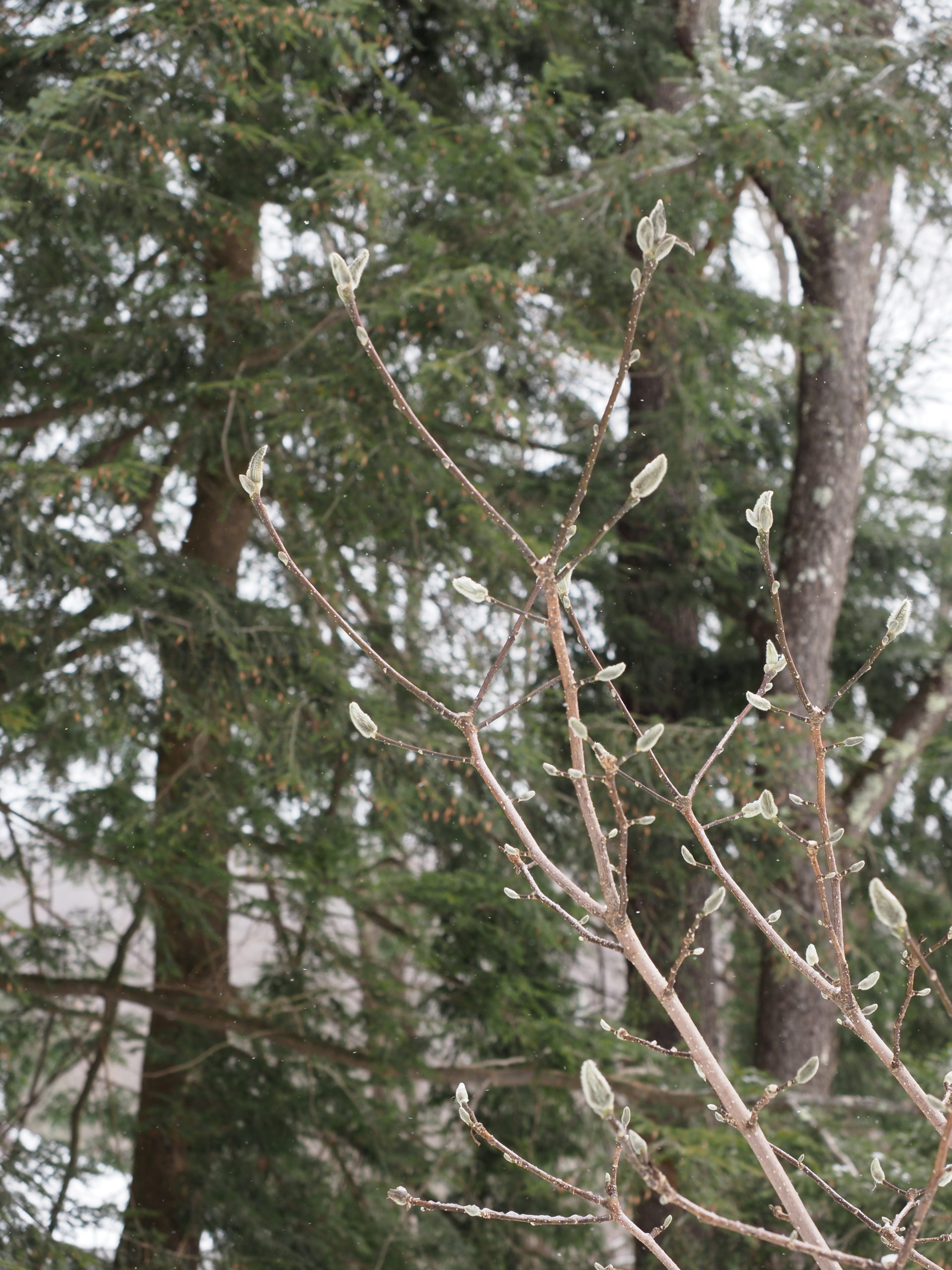 Magnolia buds are large and tempting as well as tempting to force, however, it can take up to five weeks from cutting the branches until flowering. ANDREW MESSINGER 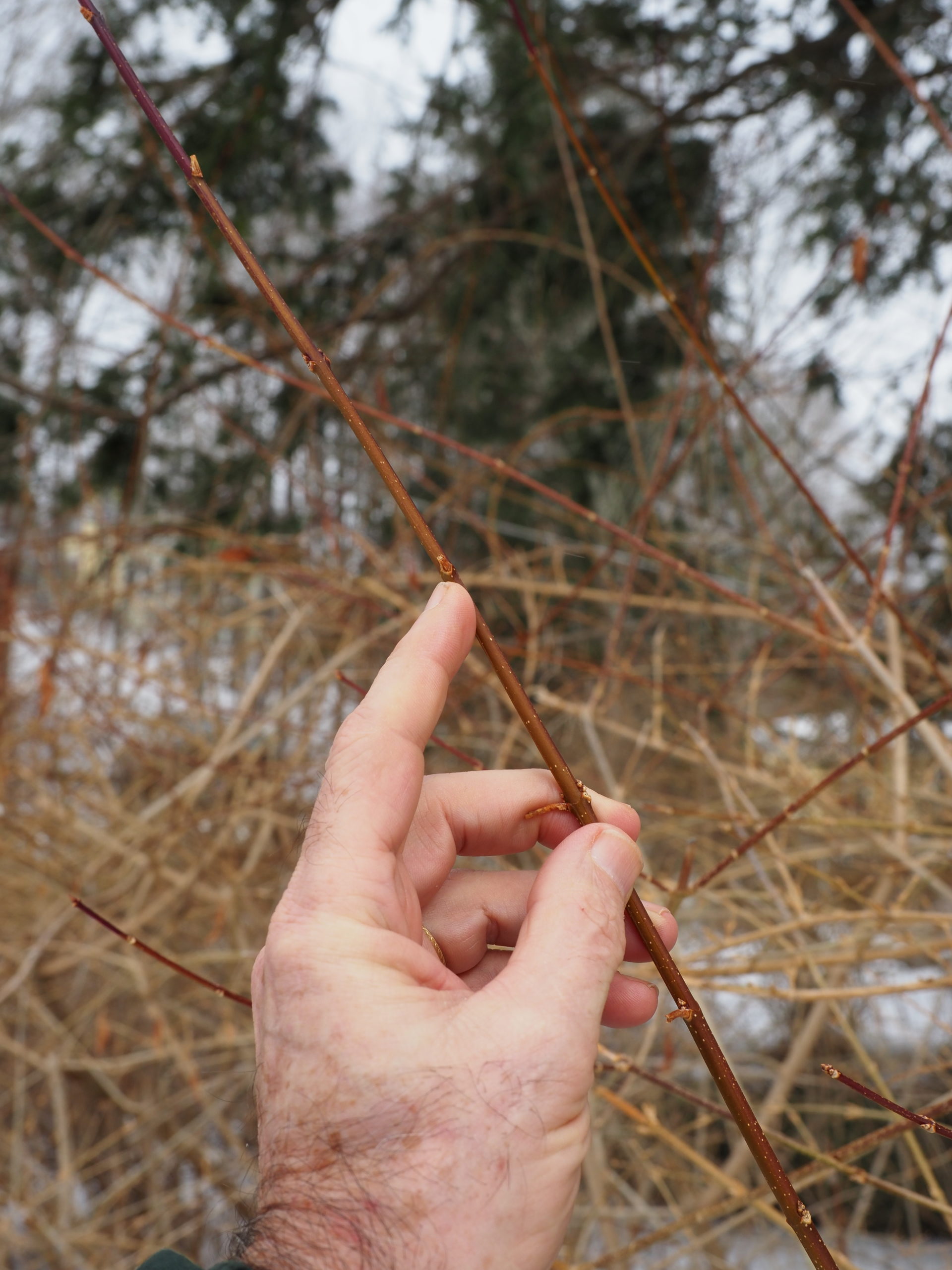 When choosing forsythia canes for forcing avoid canes with long spaces between the buds and canes with small buds. In this case, the buds are only about a quarter inch long with bud spacing of more than 4 inches. This one won’t make a nice display. ANDREW MESSINGER

We have just over five weeks of winter left, but in spite of the gray and gloomy attitude that Mother Nature has left us with there are still plenty of things to do and consider when it comes to the outdoor gardens. Some of the work is mental, some physical, but all of it requires both your brain and a little bit of physical exertion. So, stretch, get the cobwebs out of the gray matter and let’s get some work done.

In spite of a forecast for a cold and wet winter the best we’ve been able to come up with is cool and wet. This isn’t a great recipe for the outdoor gardens, but we can’t do anything about it other than being aware of the consequences. Yes, just like a cold and snowy winter’s consequences, damp and wet can certainly have a downside. One consequence — unless it gets really, really cold for several weeks — is that the insect populations will be higher this gardening season as will the tick population. Cold winters can reduce some insect populations by half, force many into an extended dormancy and even kill off some like the hemlock woolly adelgid to the point where they seem to disappear, but only for a year. This is not one of those years.

Don’t be fooled by current or recent weather, though. At this time of the year, snowfalls can be heavy and wet, and those are the most damaging to shrubs, foundation plantings and hedges. If we do get heavy wet snow that accumulates on these plants, get out as soon as it’s safe and try to free them of their snowy burdens. This can usually be done by simply shaking branches and limbs from the top to the bottom, but gently. Don’t allow snow to pile up on the bottom and lower branches. We know from past late-season storms that when snow is allowed to pile up on the lower portions of plants like rhododendrons and some hydrangeas it has a great insulating effect, but this can be both a blessing and a curse. A blessing because the snow is insulating. A curse because the longer the snow does its insulating trick the later the protected portions of the plant will flower — which the unprotected portions may flower earlier, or not at all.

So, knowing that we’ll need to be especially vigilant there is at least one thing you can do to counter the lack of cold. Make sure you have dormant oil sprayed on appropriate trees and shrubs and especially your fruit trees. Dormant oils are sprayed as soon as the night temperatures stay above freezing for several days and nights and is usually done in March. These sprays, many of which are organic, smother any surface insects including scale, mites and aphids (and their eggs) that are present without harming other insects or the plants. It’s the best insurance you can get for an orchard but there are some trees that dormant oil can damage including cedars, maples and spruces. In most cases, an arborist will do this spraying. But if you have a small property or the right equipment, you can do it on your own and you can also find dormant oil recipes online (and at garden centers) that are totally organic and effective. Keep in mind though the timing is critical. Plants need to be dormant and the temperatures above freezing for about 24 hours from the time the spray is applied.

And the latest long-range weather forecasts for this spring? The latest one I received last week called for a slow, wet and cool spring. Keep that in mind when you make your planting plans. Most plants hate being planted in cool and wet soil, but when they arrive in the mail or by the UPS truck they need attention. This doesn’t necessarily mean planting in the garden, though, so it’s a chance to reuse those plastic nursery pots as holding containers until the soil warms and dries a bit.

No, it’s not a good time to prune roses. While it's fine to prune canes that may have been damaged by the wind, a general pruning of roses now can and probably will lead to additional dieback with the pruning having to be repeated early in the spring. Resist the temptation unless you have broken canes, but you can spray your roses with dormant oil as this can also help to control several diseases that may be present on the stems and branches.

This is also prime time for pruning fruit trees. We actually did a major renovation of the orchard as many of our apple trees had been allowed to get so tall that the uppermost fruit was pickable only by ladder. This adds time and risk during the harvesting season, so a reduction of the main leaders was done. This may reduce yields for a year but next year we’ll have a bumper crop as long as there’s a good bud set. Fruit tree pruning is primarily done with hand pruners or telescope pruners. The variety of apple (or other fruit) and what it’s been grafted onto will determine how much pruning you need to do. Many newer varieties need little to no annual pruning, but older varieties require this annual ritual. There are plenty of videos online that will help you figure out a strategy or you can get professional help. But again, now through March is the time to get this done.

And as you’re pruning your fruits don’t discard the resulting branches and twigs. Collect the straight pieces of a foot or more in length and cut them all to a foot or so then bundle them and tie the bundles with twine. Find a place to store these bundles and next winter these cuttings will make outstanding kindling that will have a wonderful aroma when burned. And if you’re growing your apples organically you can use the sticks during the summer in your barbecue as a smoky apple flavoring.

This is also the perfect time to cut branches that you’ll force into flower for use indoors. Select branches that are well-budded, i.e. with a large number of flower buds. Best results will occur with younger branches because they have more flower buds. Flower buds are usually larger and rounder than leaf buds. If there is a question, cut a few buds open with a knife or single-edged razor blade and look for the flower parts. Some fruit trees bear flowers on short fruit spurs. Watch for these on apples, pears, and ornamental crab apples. And don’t limit yourself to fruit trees either. There are the standards like forsythia and pussy willows, but you can also force azaleas, magnolias, dogwoods and rhododendrons and many more. In all there are over 30 different trees and shrubs that can be forced to produce their flowers or catkins. You can find a fairly comprehensive list of forcible branches and the time it takes to get them to bloom at ag.purdue.edu/hla/pubs/HO/HO-23.pdf.

When leafing through your plant and seed catalogs and online nurseries you may see a note on one or more of your selections that indicate that the plant is being sent to you as a “bare root.” What you get is just a root mass with a crown or stem attached, and it's up to you to plant the root mass and grow the plant you’d hoped for. More often than not, these plants were from last year’s crop and at the end of the growing season they were washed and cleaned of all soil then stored over the winter in refrigerators.

This process, in which all the soil has been removed, allows these plants to be shipped internationally as there is no soil with the plant thus avoiding some agricultural import restrictions. I think this adds another layer of risk for you, the consumer, as you now have to plant the bare root or crown exactly right or it rots or just doesn’t do well. Sometimes it’s the only way to get a plant, but it’s also a way for nurseries to charge high prices for a plant that would cost the same if it were purchased as a potted plant at a local nursery. Just some food for thought.

Keep up with your shopping, ordering and reading. On a sunny, warmish day, maybe make another application of deer repellent? Another glorious garden season is just weeks away. Keep growing.

It’s time to take your holiday gifting for your favorite gardeners seriously, and this week ... 19 Dec 2019 by Andrew Messinger
Sign in to comment