After A Decade-Long Wait, Construction On East Hampton 'Affordable' Condo Development Could Start This Year - 27 East

After A Decade-Long Wait, Construction On East Hampton ‘Affordable’ Condo Development Could Start This Year 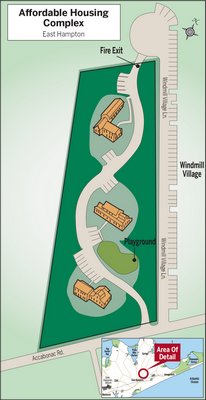 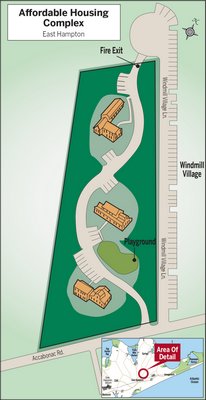 A nearly decade-old plan for an affordable housing complex off Accabonac Road in East Hampton may finally be headed into the homestretch this month, as the committee that has been shepherding it through a labyrinth of regulation is ready to recommend a contractor to handle the construction.

The committee, made up mostly of East Hampton Town officials, is due to meet this week to choose from among the construction proposals it received from various contractors. It will then make a recommendation to the Town Board, which could resolve to hire the chosen contractor later this month or in April.

The town purchased the 3 acres at 181 Accabonac Road that formerly housed the Accabonac Tennis Club in 2007 for $882,000. Earlier that year, architect Amato Ortiz, who is a member of the project committee, first unveiled the idea of the manor house design, which integrated several apartment units into structures designed to look like large single-family homes.

But the project was shelved by the financial scandal and $30 million-plus deficit that beset the town starting in 2008. It was revived after the Democratic Party regained control of the board’s majority in 2013 but crawled through the Suffolk County Department of Health review process, which took more than two years to complete. The town’s Architectural Review Board is the last agency that must give its approval once the final plans have been chosen.

Each of the three buildings in the project plans would include four apartments: a one-bedroom unit, two two-bedroom units and one three-bedroom unit. The units would not be rented but would be sold as condominiums, for between $150,000 and $300,000. The town’s housing director, Tom Ruhle, said the final costs will depend on the ultimate cost of constructing the project, which he estimated at between $2.5 million and $3 million.

“A lot of it will depend on if we get grant money from other places, but we’re hoping to sell [the 12 units] for what we have to spend to build them,” Mr. Ruhle said. “The town is not to be reimbursed for the cost of the land.”

Town Councilwoman Sylvia Overby said that the committee is choosing from among designs that employ traditional “sticks and bricks” construction and modular-style construction. Some of the designs, she said, include progressive energy-saving components but present a substantially higher up-front cost for construction.