As CPF Revenue Grew In East Hampton In 2018, Southampton Slipped 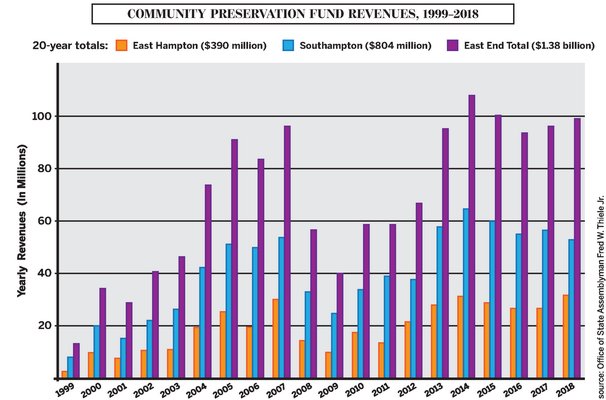 Revenues in East Hampton soared 20.3 percent year over year, posting the highest annual revenue East Hampton ever garnered in the program’s two-decade history, $32.07 million. But in Southampton, revenues dropped by 6 percent, though Southampton garnered the lion’s share of the funds, collecting $53 million.

Southampton’s 2018 CPF purchases exceed $16 million. The most expensive purchase was the former Lobster Inn property in Shinnecock Hills, off Sunrise Highway, in July, totaling $7.6 million. The majority of the 10-acre property was preserved as open space, but 1 acre, which includes a house, was bought to provide space for water quality improvement projects, including a sewage treatment plant.

In 2016, the CPF was expanded by referendum to address water quality issues. Up to 20 percent of CPF revenue can now be used on water quality projects.

A private shellfish hatchery is now housed on the Lobster Inn property.

The most acreage was acquired through another July purchase of a swath of 15 acres in Speonk, where developers had planned a 60-unit condominium complex.

Purchases in East Hampton last year total more than $6.34 million. The largest price tag also included the largest acreage: the town paid $4 million to Peter Dankowski in January for the development rights on nearly 30 acres in Wainscott. The land will remain in food crop production in perpetuity.

“More revenue is always a good thing,” said Scott Wilson, the East Hampton Town director of land acquisition and management. He handles all CPF purchases for the town, but it is the elected officials who decide which properties to buy.

“With more money, we can further the goals of the Town Board with regards to preservation,” he continued. “Everything is a bit of a moving target in terms of which properties to pursue.”

Mr. Wilson said the days of acquiring more than 20 acres of land for preservation are a thing of the past. “We don’t have much of that anymore,” he said.

The town’s efforts to purchase property in and around Hog Creek in Springs have been a priority.

“Assuming, in 2019, purchases are going to be for water quality purposes, such as waterfront properties in areas that have low tidal flushing, that could mean acquiring vacant properties or developed properties where we can have the structures removed and bring them back to a natural state,” Mr. Wilson said.

Southampton hasn’t been as focused on just one issue, but saw its fair share of controversy in 2018.

A bid to purchase the Bel-Aire Cove Motel for $1.06 million using CPF money languished for months. Town Board members couldn’t decide if purchasing the blighted motel for community development purposes, as has been proposed by Supervisor Jay Schneiderman, would be a better option. A solution still hasn’t been chosen.

In October, the board approved the purchase of a Shinnecock Hills property where skeletal remains, thought to be an ancient Shinnecock Indian Nation leader, were found in August. The land was preserved as open space so development could not disturb the ancient burial ground. Some residents criticized the use of CPF funds for the purchase.

The purchase of development rights for historic preservation purposes got residents riled up when the board purchased covenants on the Sag Harbor Cinema property using CPF revenue. The covenants preserve the building’s iconic facade and prevent the property—a movie theater that burned down in December 2016 but has since been purchased by a nonprofit to be rebuilt—from becoming something other than a cultural center in the future.

Mr. Thiele attributes the decline in CPF revenue in Southampton to uncertainty around changes to the federal tax law, which took effect in January 2018. The law put a $10,000 cap on the federal deduction for state and local taxes and changed the mortgage interest deduction for new loans by reducing the deduction limit from interest on a balance of $1 million to a balance of $750,000. Plus, interest rates for new loans climbed throughout 2018 before lowering slightly by the year’s end.

These changes and rate increases stalled low-end home sales, Mr. Thiele said. But high-end home sales, which are the primary driver of CPF revenue, were not significantly impacted.

“The funds we bring in is directly related to the market,” said Southampton Town Attorney James Burke, who is serving as interim community preservation manager. The previous manager, Mary Wilson, retired in January.