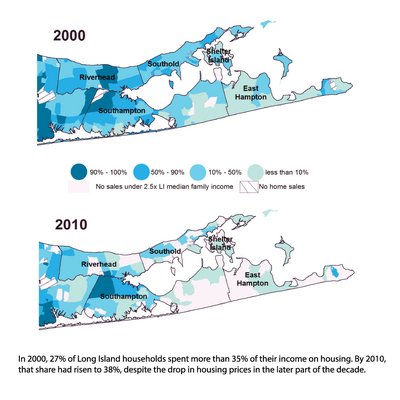 Affordable housing shrank on the East End between 2000 and 2010. TY WENZEL

Call it what you will—“brain drain” or “birth dearth”—but a recent study by Community Housing Innovations Inc. claims young talent is becoming increasingly rare in towns like Southampton and East Hampton due to high costs of living as well as a lack of jobs and affordable housing and rentals.

Overall, Long Island lost 12 percent of its 25- to 34-year-olds between 2000 and 2010, according to the nonprofit housing agency. That stands in contrast to a 6-percent loss in northern New Jersey and a 3-percent gain in New York City. The study claims age disparity is most severe in Long Island’s wealthiest suburbs.

Tom Ruhle, East Hampton Town’s director of housing and community development, said this marked sparsity of millennials that has already begun to show its face along the forks, threatening community vitality.

“Fire departments are having trouble recruiting and are having to hire year-round EMTs because they don’t have enough volunteers,” said Mr. Ruhle. “It raises the question of where are we going to be in 30 years if this continues.”

According to the 2010 U.S. Census, Suffolk County residents are already older, on average, than people across the United States as a whole—with an average in Suffolk County of 39.8 years compared to 37.2 years nationwide. Mr. Ruhle said the Housing Innovations claim that the disparity is more severe in wealthier areas can be demonstrated when dissecting the neighborhoods in East Hampton Town.

The average resident of East Hampton Village, he said, is 55.5 years old. Amagansett and Napeague came in at 52.2 and 55.4, while in Springs the average age is only 38.2 years old.

“Our population is slowly skewing older and older ... and that’s a big picture issue that we all have to look at,” Mr. Ruhle said. Southampton Chamber of Commerce president Micah Schlendorf said the trend is affecting local businesses, whose owners are reporting increased difficulty in finding quality employees.

“A big issue we hear from chamber members is that it’s hard for them to find talented individuals to work for them—even part-time high school students to get started working for the local businesses, maybe go to school and come back and be interested in working there later on,” Mr. Schlendorf said. “That, unfortunately, seems to be diminishing because a lot of young ones are not coming back after school is over.” Mr. Schlendorf said he believes high real estate costs, along with stigmas attached to the idea of workforce, or affordable, housing, are to blame for Long Island’s dwindling millennial population.

Eric Alexander of Vision Long Island, an advocacy organization that seeks to help local communities adapt to a changing world, suggested that towns and villages need to be willing to accommodate many young adults’ partiality to lively, walkable downtown areas. “If Long Island wants to take advantage of young people’s preferences, which seem to be toward more urban living, we can, if we choose, adapt our downtowns to make places amenable for young people,” said Mr. Alexander. “The challenge for the East End is a lack of flexibility in allowing for the building types needed to make activities affordable enough.”

The CHI study claims millennials will continue migrating up and off-island to lower-cost urban enclaves like Brooklyn until there is a change in status quo on the literal home front, in addition to adapting downtown spaces to fit changing lifestyle preferences. Former Southampton Town Supervisor Patrick Heaney said he believes this to be true.

“The way the zoning laws are configured in the Town of Southampton pretty much ensure that the only type of housing that will not be greeted with public outrage, public opposition or lack of political will is a small McMansion—and that’s discouraging,” Mr. Heaney said. “Someone who just gets out of college doesn’t have the equity to buy a house or a condo, so communities need to realize that if we were to ever put flesh on the bones of the ideas in our Comprehensive Master Plan, we need to have the courage to implement the ideas that appear in these studies.”

Mr. Heaney, legislative director for the Southampton Business Alliance, said he hopes the current Town Board will adopt legislation that creates standards for multifamily housing proposals to be directed immediately to the Planning Board if proper criteria is met.

“That way there could be a rational discussion based on the need for housing rather than the topic of multifamily housing in a Town Board room, where it’s just politicized,” Mr. Heaney said. “I say that because I was there. I know how difficult it is to get affordable housing.”

Current Supervisor Anna Throne-Holst did not return a call for comment.

“It’s a really small lot, so we’re basically trying to figure out who’s behind it and why it has to be on this piece of property and why they’re forcing 28 rentals and now they’re calling it workforce housing,” said Ms. Bailly, who added she does not believe there is a local “brain drain” of her age group. To her, the loss of local young people is a natural progression, not a problem. “Kids go,” Ms. Bailly said. “They go. I’m not from here. I’m from Montana. I left Montana and somebody goes and takes my place in Montana.”