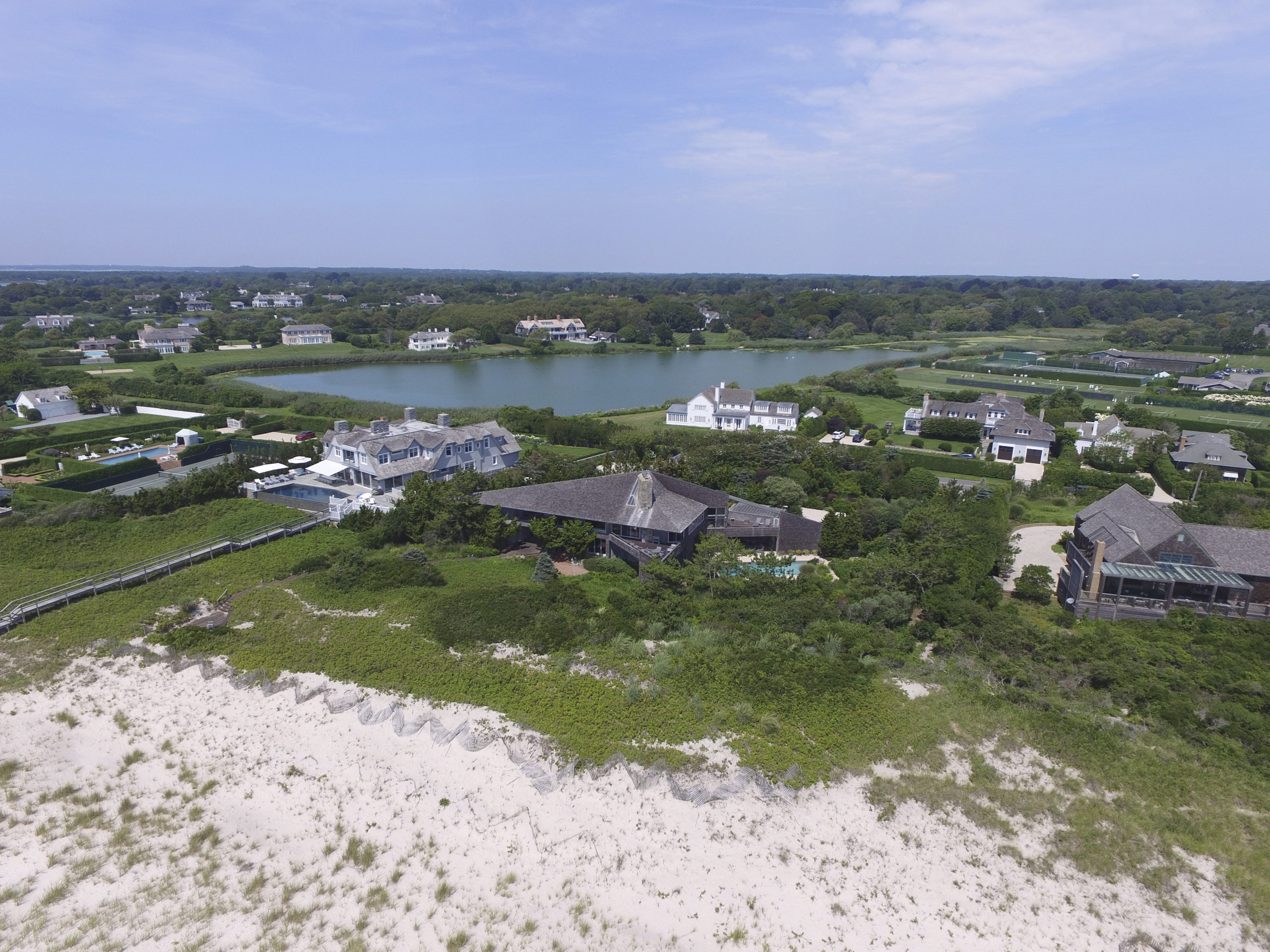 The residence at 88 Meadow Lane in Southampton Village was originally designed by Norman Jaffe. It was later renovated and added onto by Barnes Coy Architects.

The attorney for a homeowner seeking a demolition permit for his Meadow Lane residence, which was originally designed by renowned architect Norman Jaffe, told the Southampton Village Board of Architectural Review & Historic Preservation that the 60-day review window has expired ‚Äî and the board has no choice but to render a decision immediately.

The board chairman did not agree and indicated that the ARB will withhold judgment until a report the board ordered from a historic consultant is complete.

Though the residence was built in the late 1970s ‚Äî it has since been renovated and expanded ‚Äî its demolition is subject to ARB approval because it is located in a historic district.

‚ÄúI don‚Äôt think you have any option but to make a decision this evening,‚Äù said John Bennett of Southampton law firm Bennett & Read during the board‚Äôs August 23 meeting. He quoted the section of the village code that says the ARB must approve or deny an application within 60 days of receiving a completed application.

‚ÄúThat‚Äôs a mandatory time period,‚Äù he said. ‚ÄúYou don‚Äôt have the authority or ability, for whatever reason, to extend it.‚Äù

Mr. Bennett noted that at the time the house was built, the ARB required that his client, Orest Bliss, maintain a landscape plan to shield the house from view. ‚ÄúThis board only permitted construction of the home provided no one can see it,‚Äù he said. ‚ÄúNow, the fact that your board composition may have changed is irrelevant. You are bound by the prior determinations of your board.‚Äù

He also argued that, at 43 years old, the house is not eligible for historic preservation. He said that state and federal statutes will not consider properties that are less than 50 years old ‚Äî a point that preservationists who wish to save the house have challenged.

Mr. Bennett further argued that the house has not been an ‚Äúorganic Jaffe home‚Äù for more than 20 years. The facade of the house was extended, he said: ‚ÄúIt‚Äôs twice the length it was, and it was not a Jaffe design, it was a Barnes Coy design.‚Äù

He also pointed to the board‚Äôs recent approval of a demolition permit, in 2019, of a Jaffe-designed house at 210 Meadow Lane.

‚ÄúAny action contrary to those prior determinations would be deemed arbitrary and capricious,‚Äù Mr. Bennett said, offering case law to support his argument and adding that the ARB‚Äôs history of decisions regarding this house and other Jaffe houses effectively ‚Äúhandcuffs‚Äù the board.

‚ÄúYou may not like what was done in the past, but that‚Äôs ‚Äî unfortunately, under the law ‚Äî too bad.‚Äù

ARB Chairman Jeffrey Brodlieb told Mr. Bennett that the board notes his objections but has met with legal counsel and is acting within its rights. He cited the past adjournments of the matter, called the application incomplete, and said the board has a right to bring in a consultant.

‚ÄúIf you‚Äôre telling me you have counsel as to why you have that power, you have to put that on the record,‚Äù Mr. Bennett said.

That did not sit well with Mr. Bennett.

‚ÄúThat is absurd,‚Äù he said. ‚ÄúIt met all the filing requirements. You cannot create your own incompleteness by the fact you haven‚Äôt taken action within the required 60 days.‚Äù

Mr. Brodlieb offered to make the historic consultant‚Äôs report available once it is done, and he said the board members would like to view the property to assess the claims Mr. Bennett has made.

‚ÄúI‚Äôm not giving you any access to a property where your time to act has passed,‚Äù Mr. Bennett countered.

The application was adjourned, over Mr. Bennett‚Äôs objections.

Mr. Bennett also represented the owner of 550 Hill Street, which was also before the ARB to be considered for a certificate of appropriateness to allow its demolition.

Mr. Bennett noted that the house is located in a historic district, but in three different assessments of the district was never found to be a contributing structure. He pointed out that the ARB‚Äôs former historic consultant, Zach Studenroth, had prepared a report that found that it is not contributing. Mr. Bennett said he enlisted historic preservation consultant Steve Bedford for a report as well, and Mr. Bedford agreed the house is nonhistoric.

Jeffrey Bragman, an attorney based in East Hampton, spoke on behalf of the neighbors to the south and west of 550 Hill Street. He said they would like to examine the house and have their own historic assessment done to submit to the board.

‚ÄúI dispute the idea that the house is not a contributing property in the historic district,‚Äù Mr. Bragman said. He requested that the board adjourn the application rather than make a ‚Äúsnap decision.‚Äù He told the board that he understands the concerns over time limits, but added: ‚ÄúTo my knowledge, there is no default approval that can happen here. That‚Äôs my understanding of the law.‚Äù

He noted that he often represents neighbors in cases like this. ‚ÄúWe get kind of short shrift because we‚Äôre just the neighbors, but we have an equal economic interest and an equal interest in the preservation of the entire fabric of the historic district, and I think that there‚Äôs more that you need to hear here,‚Äù he said.

Mr. Bennett objected to adjourning the application, but Mr. Brodleib said the board needs more information ‚Äî namely, the historic consultant report that the neighbors‚Äô attorney offered ‚Äî and the application is incomplete.

Mr. Bennett represented the applicant in yet another request for a certificate of appropriateness for demolition in the historic district. This application, for 554 Hill Street, concerns both a single-family house and a warehouse.

He read from a 2015 report by Mr. Studenroth, who found the house was built in the 1930s or 1940s with a wing and dormers added later and the windows replaced. Neither the house nor the warehouse are listed as contributing structures, he said.

‚ÄúThis is almost sort of res ipsa loquitur ‚Äî ‚Äòthe thing speaks for itself.‚Äô There‚Äôs nothing of any sort of historic value at this property,‚Äù Mr. Bennett said, noting that Mr. Bedford concurred with Mr. Studenroth.

With no comments from the public, the hearing was concluded pending a written decision.

Together, 550 and 554 Hill Street are offered for sale as a three-lot estate subdivision or compound on 2.9 acres for $12.5 million.

A rebuilt and expanded 1902 ‚Äúcottage‚Äù on 2.3 acres in Bridgehampton with access to Sagg ... by Staff Writer

A split Southampton Village Board of Architectural Review and Historic Preservation has started the landmarking ... by Brendan J. O‚ÄôReilly

The State Legislature sent Governor Kathy Hochul a bill on Tuesday, September 28, that would ... 29 Sep 2021 by Brendan J. O‚ÄôReilly

A new state law has clarified that deposits and advance payments for seasonal rentals are not subject to caps, which means that landlords can collect rent for an entire summer upfront. Assemblyman Fred W. Thiele Jr. penned the legislation, which Governor Kathy Hochul signed last week. It was designed to make clear that limits imposed by New York State‚Äôs Housing Stability and Tenant Protection Act of 2019 only apply to permanent housing, not to vacation rentals. Prior to the Housing Stability and Tenant Protection Act, it had been common practice for East End landlords require a single payment for the ... 28 Sep 2021 by Brendan J. O‚ÄôReilly