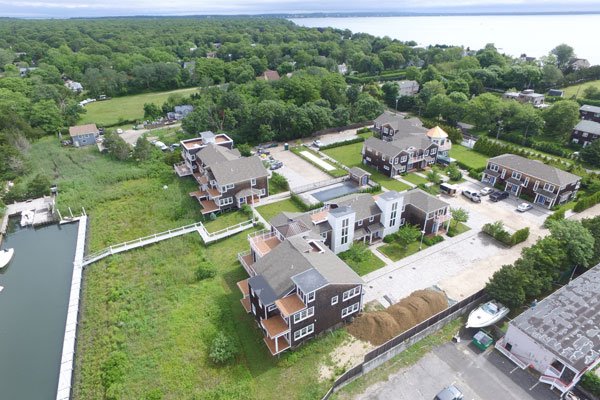 A court has ordered the sale of Ponquogue Point, the bankrupt condominium project on Foster Avenue in Hampton Bays that stalled when it was near completion.

Ponquogue Point has sat mostly idle for a few years as the project has been caught up in legal battles. But now, with the court-ordered bankruptcy sale, a new owner could soon step in to finish the development, and residents could start moving in shortly thereafter.

The project includes 21 condo units spread across four buildings and six boat slips with access to Shinnecock Bay. The complex also has a pool.

The list price is $19.95 million, though Shallini B. Mehra, a managing director at Meridian Investment Sales, noted that all offers will be considered.

The sales brochure states that the buyer could complete the construction in six months for another $1.5 million, and then sell all of the units and boat slips for about $26,830,000. That estimated $1.5 million would be on top of what an investor pays to purchase the property.

Ms. Mehra said there has been interest among developers familiar with the Hamptons.

“We’ve had a number of showings, and I think most people right now are just going over with their contractors what they think the project still needs before submitting a thoughtful [letter of intent],” she said.

Ponquogue Point is at the site where Allen’s Acres Resort Motel once stood. The development saga began back in 2004, when the project was billed as “Ponquogue Manor” and Michael Ullian was the president of holding company Ponquogue Manor Construction LLC. He told The Press in 2008 that he had owned Allen’s Acres since 1994.

The Southampton Town Planning Board gave approval in December 2008 to plans for Ponquogue Manor, but the demolition of the motel did not move forward until early 2010. Mr. Ullian said at the time that he had delayed the demolition due to economic conditions.

Contacted recently and asked to discuss the project and its status, he would only repeat: “I cannot.”

An attorney for Mr. Ullian said he would only discuss the court cases surrounding the project if Mr. Ullian allowed him to. He did not call back.

Among the legal battles is a lawsuit in which Michael Margarella and Atrium 680 LLC sued Mr. Ullian and Ponquogue Manor Construction LLC over a 2009 building loan agreement. One year ago this month, in the Appellate Division, 2nd Department, of the State Supreme Court, a justice affirmed a lower court decision that favored the plaintiffs, in the sum of $3,395,814.51.

The project was supposed to launch in 2011 — the same year many of the building permits still posted on the individual units expired — with a projected move-in date of June 1 that year. But in January 2012, Mr. Ullian told The Press that he had paused construction to wait for the housing market to stabilize, and work would resume that year. He also reported that 15 building foundations had been poured by then, and that he expected models would be available to view by spring 2013.

However, in 2013 People’s United Bank foreclosed on the property. The owner since 2014 has been Hampton Bay Manor LLC, a limited liability company of which developer Peter Sperry is the sole member. Mr. Sperry declined to be interviewed.

Construction began in 2014. The launch was announced again in 2015, when the sales center and model homes opened by Manhattan- and Miami-based Zyscovich Architects and Water Mill’s Mabley Handler Interior Design. The sales center phone number has since been disconnected.

In 2016, Ponquogue Point was part of a Newsday/News 12 report on how Suffolk County was permitting outdated sewage treatment — allowing the release of untreated wastewater into the ground at levels well above current standards — at sites with existing structures that could be occupied. Because 68 Foster Avenue was formerly a motel, the old building could be torn down and replaced with no upgrade to the wastewater treatment system, the report found. Newsday also found that, without grandfathering, only four condo units would have been permitted. Mr. Ullian told Newsday that the new condos will use new concrete septic systems with 11 feet of sand.

Hampton Bay Manor LLC filed for bankruptcy in February this year. The Chapter 11 filing states that the LLC’s real property — namely, the Ponquogue Point development and the 3.75 acres it sits on — is worth $22 million, while creditors’ claims secured by that property amount to $17,726,581.94.

Another $192,035.38 in claims is not secured by the property. Among the listed creditors with unsecured claims are construction, electrical, landscaping, propane, irrigation, plumbing, fence, and insurance companies, the Hampton Bays Water District, and PSEG Long Island.

Mr. Sperry’s bankruptcy attorney, Richard A. Klass of Brooklyn, said the mortgage holder is CC Foster LLC — not a bank— and the mortgage is secured by the property.

In an affidavit accompanying the Chapter 11 filing, Mr. Sperry’s explanation for declaring bankruptcy is the time it took to get Ponquogue Point hooked up to the local water supply.

“After obtaining the approvals and permits from the Town of Southampton, the debtor was denied access to the local water supply and it took almost two years to resolve,” Mr. Klass said, citing the affidavit. “And due to those delays, it delayed development of the property.”

Mr. Klass said he doesn’t know why the project had trouble getting public water. The Hampton Bays Water District referred questions to Southampton Town Attorney James Burke, who did not immediately return a phone call Monday.

In that February 2019 affidavit, Mr. Sperry explained that there has been no development at the property for more than two years. And, he said, sales were lost during the two years that it took to get public water hooked up, and he was unable to secure financing to finish the development. None of the units has a lease, while three have purchase agreements, he said at the time.

Mr. Sperry further explained that he was declaring bankruptcy to stay a foreclosure action that is over a disputed mechanic’s lien filed by Magnum Consulting Enterprises Inc. in 2017.

Ponquogue Point includes 11 waterfront condos and 10 others not on the water. There are two one-bedrooms, 11 two-bedrooms and eight three-bedrooms. The projected sales prices range from $765,000 to $1,852,000. Total revenue from selling the boat slips on 350 feet of dock space is estimated at $350,000.

Ms. Mehra said each condo unit has its own layout and finishes. “So it doesn’t have a cookie-cutter feel. It has more of a boutique, individual feel.”

The process to get new site plan approval is underway, according to Ms. Mehra, and when the condo plan is re-approved certificates of occupancy for each unit will be applied for.