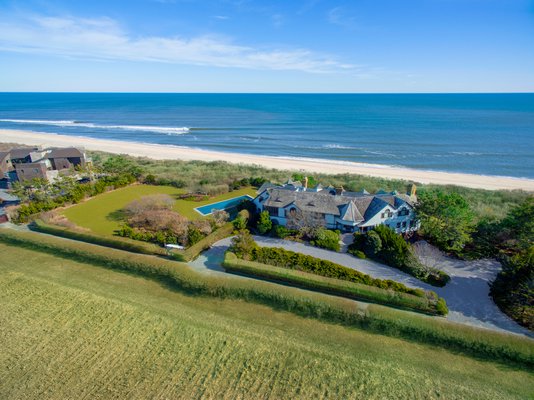 These days, a $55 million contract might get you a mid-range superstar NBA or baseball player for three years. But in Southampton, $55 million will get you an entire house on 4.5 acres of property right on the Atlantic Ocean. What does that have to do with an athlete’s contract? Well, as we’re about to explain, a former owner of the manse was Roone Arledge, the man largely credited with creating the modern televised sports landscape, this expansion of viewership accompanied by the ever-escalating payouts networks have made to the major sports leagues.

First, though, more about the Barons Lane property just put on the market and represented by Harald Grant at Sotheby’s International Realty. Within the 8,225 square feet of living space are 8 bedrooms, 8 baths, a master suite with fireplace, an office, multiple decks, a casual dining and family space with deck access, and many other high-end features. The house was built in 1991 and last sold in 2004, for $19 million. On one side are the sea views, on the other are farm fields and ponds. Reportedly, it is the most expensive new listing in the Town of Southampton … but especially this time of year, that can change any day.

For Roone Arledge, who died in December 2002, the accomplishment that stands out on his resume is founding, with legendary ad man Buck Buchanan, “Monday Night Football,” which continues to be a ratings and revenue juggernaut. But that resume is very extensive. The Queens native graduated from Columbia University with a journalism degree, then left grad school to work for the fledgling DuMont Television Network. When it folded and after Mr. Arledge served in the military, he was hired by WNBC in New York. One of his responsibilities there was to produce a puppet show hosted by Shari Lewis.

A more stimulating environment was found at the ABC television network, which was hungry for talent and innovative projects to catch up with rivals NBC and CBS. Mr. Arledge was part of the team that began broadcasting NCAA and AFL football games. He created the program “Wide World of Sports.” The network began televising the Olympics and would cover the attack on athletes in Munich in 1972. By 1968, Mr. Arledge was president of ABC Sports. Soon after, “Monday Night Football” began. The increasing competition from ABC to televise events contributed to network contracts getting fatter and fatter, and athletes wanting bigger chunks of that action.

In 1977, he added the job of president of ABC News. Early achievements were founding the show “20/20” and hiring Barbara Walters away from NBC’s “Today Show.” Mr. Arledge continued as perhaps the most visible and successful executive at ABC until his retirement in 1998.

Though his Barons Lane property was sold after his death, Mr. Arledge still owns a parcel in Southampton—he is buried at the Sacred Hearts of Jesus & Mary Cemetery.