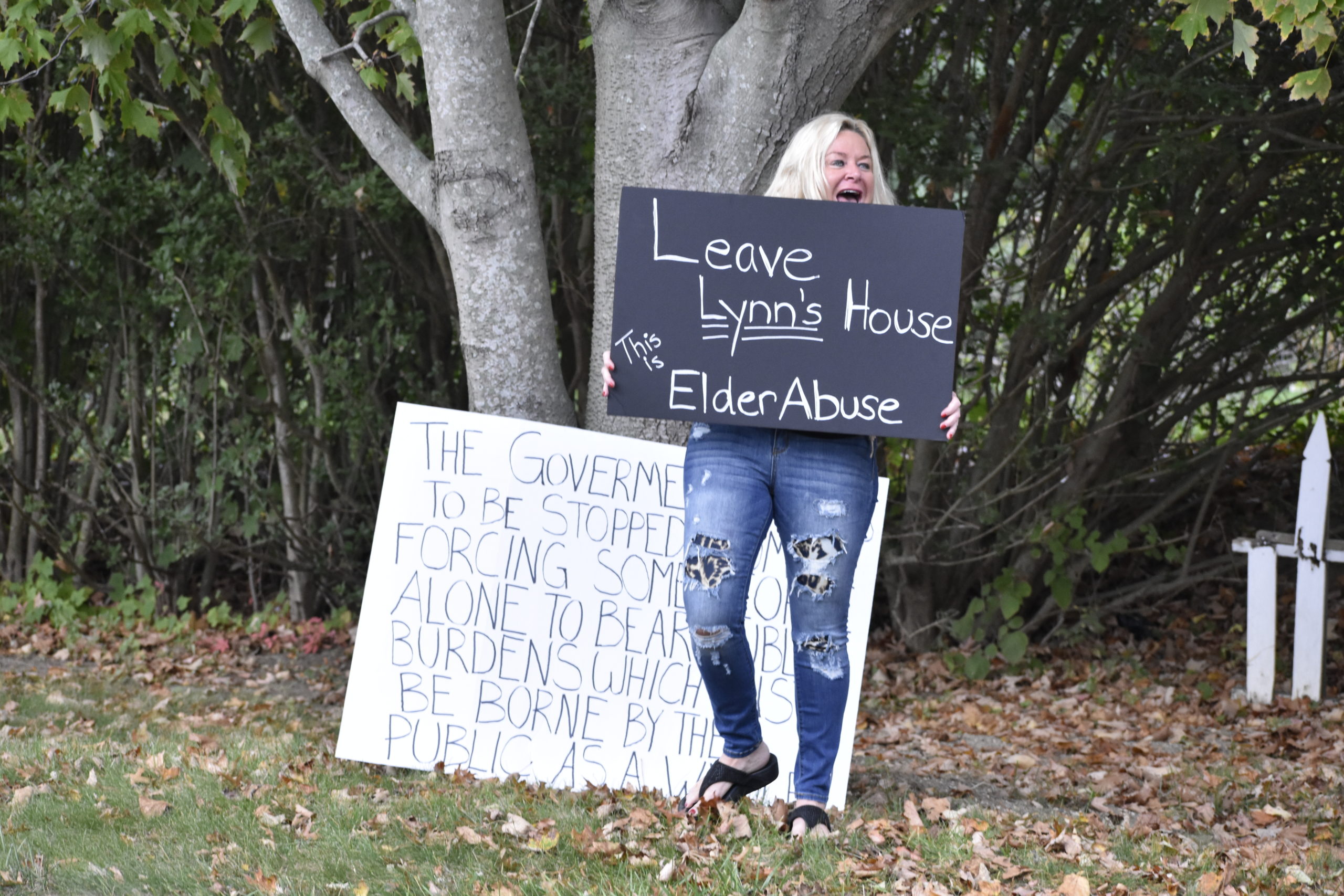 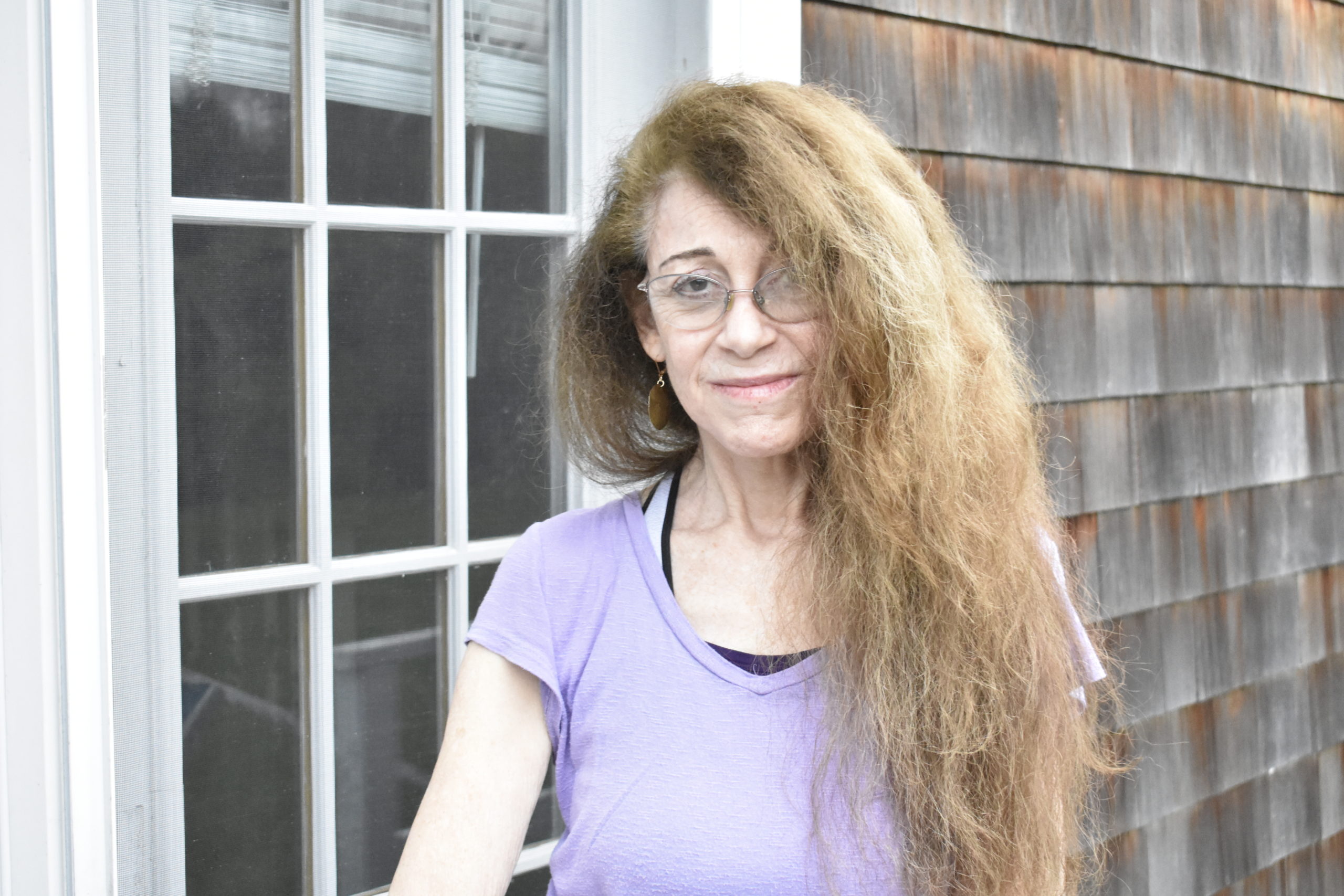 Lynn Matsuoka at her Bridgehampton home. 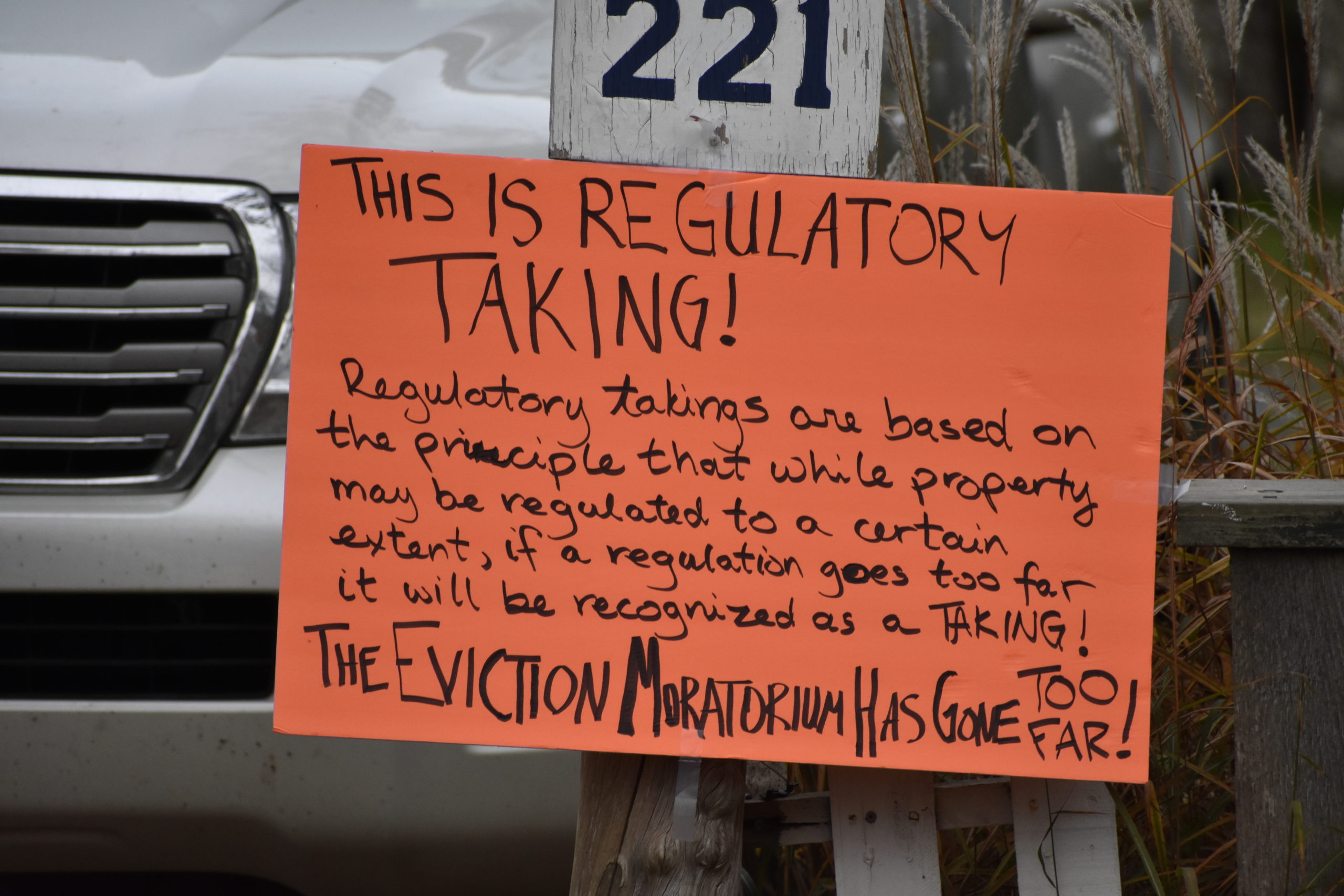 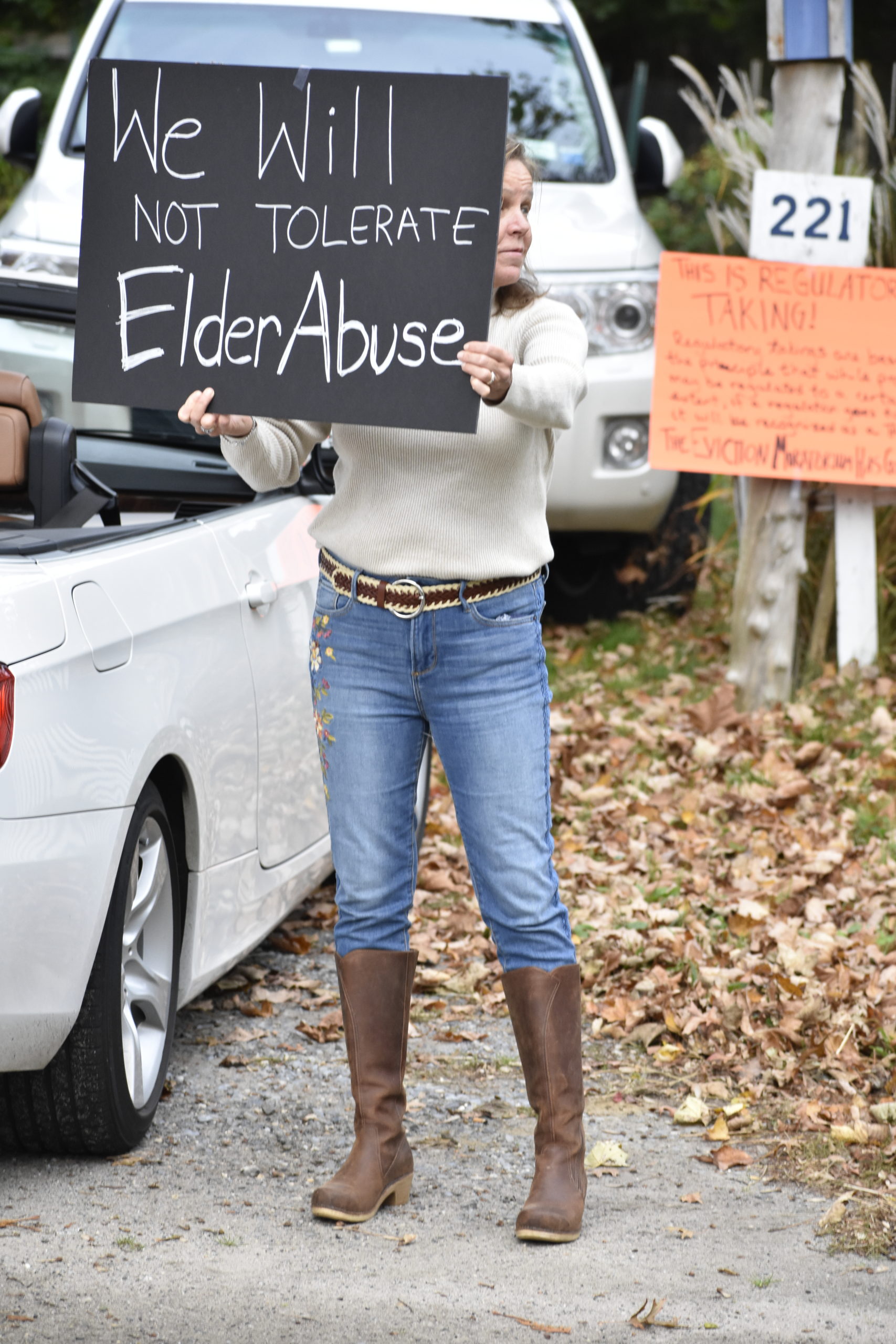 A demonstrator in front of Lynn Matsuoka's house on Monday. 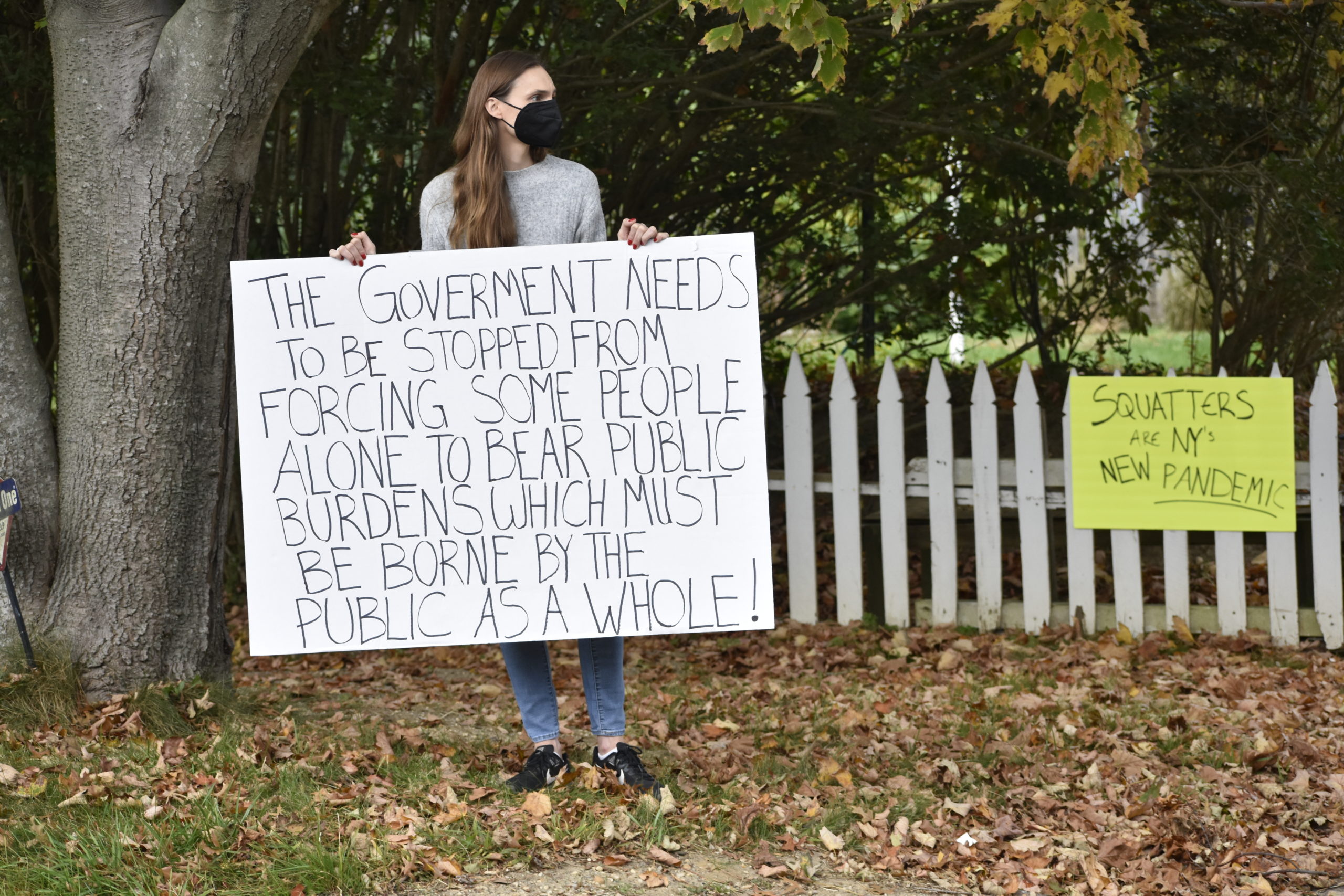 For a year, Bridgehampton artist Lynn Matsuoka has been trying to get a man out of her house, but due to his ongoing refusal to leave and the New York State eviction moratorium, she has been unsuccessful.

Matsuoka said Monday that she agreed in September of last year to let the man use a room in her house for what he said would be “a month, possibly two,” while he secured other housing. But after two months passed, he stayed put. She said she hired three lawyers, who each sent him notices to leave, but he ignored them all.

“He just took over the place like it’s his, and he walks in and out of here like he owns the place,” she said.

Matsuoka, 75, canceled knee replacement surgery because the man is using the first-floor bedroom, which she said she needs to stay in during her recovery, and now not only has her knee gotten worse, her doctor tells her that her stress-induced high blood pressure puts her at risk of a stroke.

She said the man said he would leave if he was paid, demanding $6,400 at one point and on another occasion demanding that his living expenses be paid for three years.

The Express News Group has chosen not to name the man because of the nature of the dispute.

Friends and sympathetic strangers rallied in front of Matsuoka’s Snake Hollow Road home Monday to protest the moratorium and to tell the man to leave. The modest demonstration of eight people drew honks and cheers from passing motorists.

Among the demonstrators was Christine Brennan, who said she learned of Matsuoka’s situation from a posting on Nextdoor in April. Then last week, Matsuoka posted that the man was still in her house.

“The elderly should live in dignity at the end of their lives,” Brennan said, “and this is an absolute crime that the laws in New York State won’t get this man out of her house. … If the laws don’t have a rule for dignity, at least the people in this community will. We don’t want her living in fear anymore.”

Adrianna Nava did not know Matsuoka, but said she is trying to help because she is in a similar situation with tenants in her house.

“When I heard Lynn’s story, I had just spent a whole day going in person with a sign and a picture of my child — I’m a single mom — to the courts, to the police, to the sheriff’s office. Nobody can help me. I have a great attorney. He’s doing the best he can, but he can only do so much. It’s like even the best attorneys have their hands tied behind their backs because of all of these unconstitutional … moratoriums.”

Nava said she has rented out her house in Springs on a year-to-year basis. After the State Legislature passed the Housing Stability and Tenant Protection Act of 2019, she wrote a new lease to best protect herself, she said. “But apparently contracts don’t matter anymore.”

The tenants were there for three years amicably, she explained, but now they have been there for nearly four years despite being given legal notice that the lease was not being renewed. She said they told her they are staying because New York State says they can.

Nava said the overstaying tenants are not paying rent but even if they wanted to she could not collect it. “I’m not allowed to collect it if I want to proceed with any kind of eviction,” she said. “… The state says if you want our help getting them out you can’t collect any payment from them. So I have been put in an even worse financial position just in the process of getting them out.”

Matsuoka said the man was always a guest, not a renter, and never had a lease. When he moved in, she asked for a damage deposit and utilities deposit, but he refused to give her either, she said. Instead he handed her $1,000 in cash that she considered a deposit. He gave her another thousand for the second month, and in the third month she told him he had to leave but he said he was staying and gave another $1,000, she said. He ultimately paid $4,000 but never contributed toward utilities, she said.

She said he applied for New York’s Emergency Rental Assistance Program. “I don’t think he realizes that if he’s approved they give the money to me, but I’m not accepting it,” she said, explaining that if she takes the money she will be obligated to allow him to stay. “I told the authorities, I said forget it. You don’t have enough money to pay me to keep him in my house. He’s very abusive and very obnoxious.”

She said the man had been yelling at her since January when she started asking him when he’s leaving. “He’d screech at me and lunge at me and put his finger in my face.”

Matsuoka said she is more than qualified for the “carve out” in the eviction moratorium.

The exception states that a tenant can still be evicted during the moratorium if the tenant is “persistently and unreasonably engaging in behavior that substantially infringes on the use and enjoyment of other tenants or occupants or causes a substantial safety hazard to others.”

She also said she is terrified he will bring COVID into the house.

Matsuoka said that when she shared her situation on Nextdoor, there was a flood of people who commiserated and gave advice. However, she said she can’t use 99 percent of the advice because it is illegal. “People don’t know,” she said. “Like, ‘It’s my house. Why can’t I change the locks?’ Because the cops will arrest me. They told me that.”