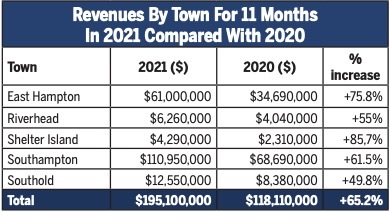 Without including revenue from December, last year’s Peconic Bay Community Preservation Fund has seen a 65.2 percent increase over the same period in 2020 — producing $195.1 million compared to $118.1 million the year prior.

In the first 11 months of 2021, Southampton brought in the lion’s share of the revenue, at nearly $111 million, while Shelter Island saw the largest percent increase from $2.3 million to about $4.3 million — an almost 86-percent jump.

“We’re so fortunate that we have this Community Preservation Fund,” Southampton Town Supervisor Jay Schneiderman said. “I think more money came in in preservation dollars last year than we took in in property taxes.”