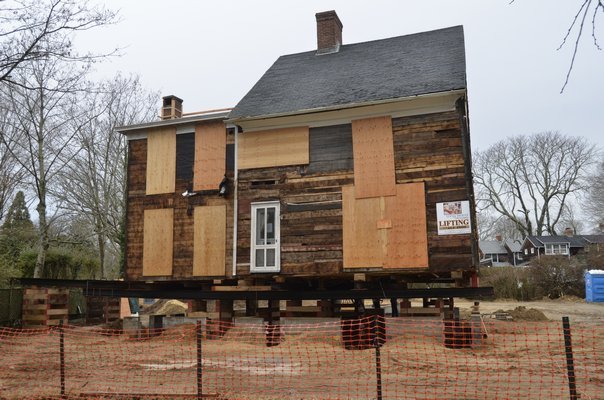 In 2013, Congress Hall is given a lift. SHAYE WEAVER

It sure is nice when the story of a house has a beginning, middle and end. In the case of the structure known as “Congress Hall,” in the Village of East Hampton, the end is that it has just been sold for $3.6 million, with the transaction handled by Douglas Elliman Real Estate. This is exactly the right time to catch readers up on the entire story.

In the beginning: The original structure at 177 Main Street was built in 1680, when the East Hampton settlement was only three decades old. The saltbox belonged to the Mulford family, and it acquired the name Congress Hall in the 1800s because men of the village would congregate there for informal gatherings. The attraction of the home was that its proprietor then, David Mulford, was a bachelor and thus no women would be privy to matters being discussed. Over the centuries the original structure—which did not contain a single nail—was expanded, until the last addition in 1930.

The middle period: Congress Hall stayed as is into the 21st century, though it needed a lot of work. In the spring of 2012, two years after its last owner passed away, a couple, Don and Kathy Ashby, fell for the house on its half-acre lot and bought it for $900,000. They weren’t about to simply patch things up—they wanted a complete renovation. Late the following year, the contractor hired for the job lifted the house off its foundation and the restoration and modernization project began. When it was completed in 2015, the 5,500-square-foot residence contains 5 bedrooms and 5.5 baths, open-plan living on the first floor, a “Boffi” glass kitchen, a gym and a laundry room, and the floors are wide-plank oak. Outside, there is a heated L-shaped pool, two-car garage, marble patios, and lush landscaping.

The $3.6 million sale, is the end for the Ashbys, but just the beginning for the new owners, as the former Mulford home is ready for future generations.