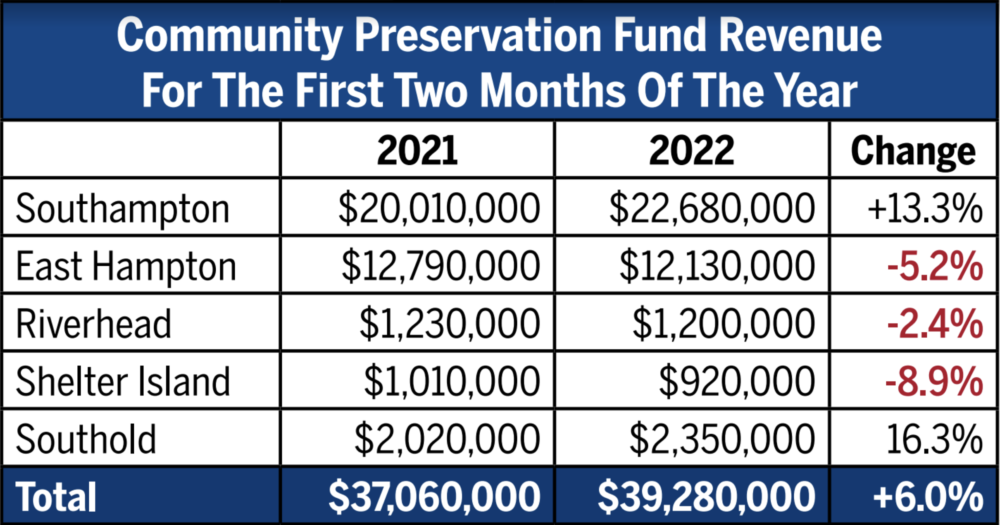 The Peconic Bay Community Preservation Fund’s revenue for the first two months of the year is up 6 percent compared to the same period in 2021 — and all of the growth was in Southampton and Southold towns.

Across the five East End towns, the CPF, which raises money through a 2 percent tax on real estate transactions, brought in $39,280,000 during the months of January and February, according to the office of Assemblyman Fred W. Thiele Jr. of Sag Harbor. In February alone, the CPF haul was $14.59 million, compared with $16 million in February 2021. It was the 18th consecutive month that CPF revenue exceeded $10 million.

The CPF saw record-breaking annual revenue totals for the last two years as the COVID-19 pandemic led to unprecedented interest in East End homeownership. The market continues to be strong, with home prices pushing higher, but the inventory has not kept up with the level of interest. The low inventory has led to CPF revenue contracting in some towns but still staying well above the historic average.

In Southampton Town, CPF revenue was up 13.3 percent in the first two months of the year, reaching $22.68 million. Southold, at $2.35 million, was up 16.3 percent. The revenue in these two towns was enough to push the East End total up 6 percent.

Over the last 12 months, the CPF has generated $212.85 million. Since its inception in 1999, the fund has generated $1.85 billion for open space and historic preservation and water quality protection.