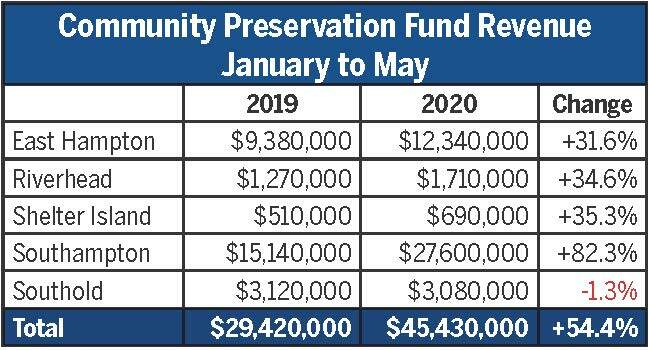 CPF Revenue for the first five months of the year.

The Peconic Bay Region Community Preservation Fund raked in $45.43 million in 2020 through the end of May — the biggest five-month haul in the history of the CPF — despite the COVID-19 crisis and social distancing measures hindering real estate showings in spring.

The $7.1 million that the CPF collected in May also pushed the lifetime revenue total for the program over the $1.5 billion mark, according to the office of New York State Assemblyman Fred W. Thiele Jr. The 22-year-old program is funded through a 2 percent tax on real estate transactions in the five East End towns. Each town maintains its own fund to buy up and preserve land and places of historical significance for preservation or public use. CPF money can also be used to purchase development rights on agricultural land, and up to 20 percent of revenue may be spent toward improving water quality.

The CPF started 2020 strong: It had the best first quarter revenue in its history. First-quarter revenue was 86.9 percent higher in 2020 than it was in 2019, which was considered a weak year for Hamptons real estate. Then the market went into 2020 with its hottest winter in 10 years.

CPF revenue through May is 54.4 percent higher this year than in the first five months of 2019. Most of the growth happened in the Town of Southampton. There, revenue went up by 82.3 percent to $27.6 million.