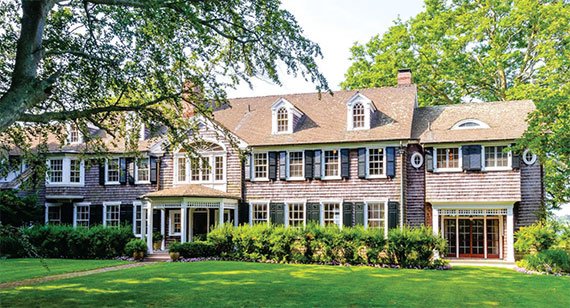 Some of you faithful readers may have a few extra million to acquire a great piece of property … but $140 million? That is what it will take to become the new owner of the estate known as Briar Patch in East Hampton. And that price has landed the manse on the new list of most expensive properties for sale in the United States.The list can have some relevance. It has been generated by Realtor.com, and it consists of the 35 most expensive homes for sale in the country. Topping the list at an even $200 million is 594 S. Mapleton Drive in Los Angeles. For only $5 million less, you can own 2000 S. Ocean Boulevard in Manalapan, Florida. In the top 10 are two Connecticut estates, both in Darien and both looking for $175 million. Where is Briar Patch? You will find it at lucky #7, for $140 million, $15 million ahead of the next listing, in Santa Barbara, California. (For the curious, at the bottom of the list is a home in San Francisco with the relatively paltry price tag of $69.35 million.)

Actually, the owners of Briar Patch have not been very lucky because the 11-acre property has been on the market since 2014. Too bad, because it is certainly appealing enough. It offers a quarter-mile of waterfront on Georgica Pond with a four-bedroom guest house adjacent to a 10,000-square-foot main house, originally built in 1931 with a much more recent, extensive renovation overseen by the architect Peter Marino. Among the amenities are handmade wallpaper, French doors with large porches on the ground floor, hand-stenciled ceilings, a gym on the third floor overlooking the ocean, and a guest house with its own private driveway. On the manicured grounds can be found a pool and a pond and a sunken tennis court.

The owners of Briar Patch are the photographer Priscilla Rattazzi and her husband, Chris Whittle. The latter, a native of Tennessee, became the publisher of Esquire magazine in 1979 and went on to found Whittle Communications, a successful media company. He then turned his attention to education, creating the Edison Schools, and he is presently the chief executive officer of Avenues: The World School, an international system of schools for pre-K through 12th grade. If he gets his asking price, that should buy a lot of textbooks.