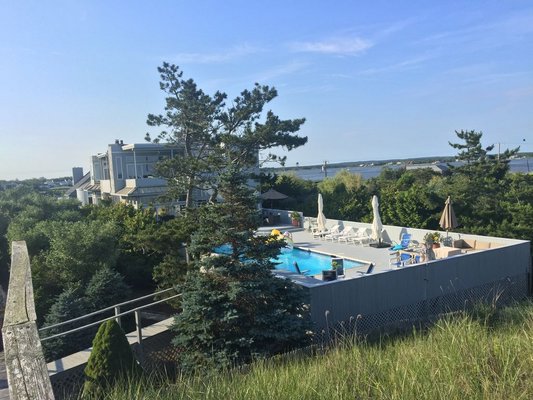 We’re pretty certain that the former FBI director James Comey will not recover from his testimony before a U.S. Senate committee last week by relaxing at 87 Dune Road in the Village of Westhampton Beach. One reason is the property has just sold, for $3,718,500. (Really was the extra $500 that important?) Second, just in case the seller, Elizabeth Grau, has not yet moved out. The name doesn’t ring a bell? She is also known as one of the two older sisters of President Donald Trump.

Ms. Grau, now 74, is one of the president’s four siblings, all of whom grew up in Queens. She graduated from the Kew-Forest School and Southern Seminary College (now Southern Virginia University). When she went to work full time, it was in the banking sector. When Elizabeth Trump married James Walter Grau in 1989, her brother Donald was one of the ushers. Mr. Grau is the president of Charisma Productions, the producer of documentaries and sports programs. He has also produced live events and concerts for television networks and cable outlets. He once served as the director of entertainment for the Mar-a-Lago Club in Palm Beach, which has served as President Trump’s weekend residence, or “Southern White House.”

The 0.67-acre oceanfront property the couple just sold has a 4,123-square-foot residence with 5 bedrooms, 6 baths, a heated in-ground pool, 2 fireplaces, and, we’re told, “an open layout flooded with sunshine.” Just in case things don’t go well for the Trump Organization while its CEO is in the White House, the sellers might want to hold on to the buyer’s contact information: Kenneth Eckstein is one of the top bankruptcy attorneys in Manhattan.

The sale of another very appealing property in the Village of Westhampton Beach was reported this past week. For $12,200,000, Crampton Society LLC purchased 119 Dune Road from Wendy Keys. (Avid readers may recall we wrote about Ms. Keys last year, when the former executive producer and programmer of the Film Society of Lincoln Center bought a house in Wainscott.) The shingle-style estate that just changed hands—a survivor of the Hurricane of 1938—is 5,715 square feet, with 8 bedrooms and 8 baths, on a generous 5-acre oceanfront lot.