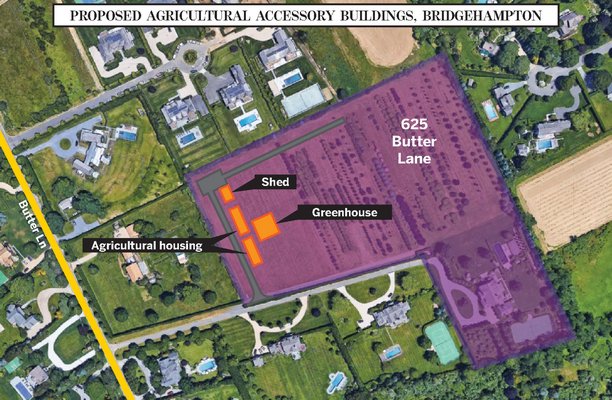 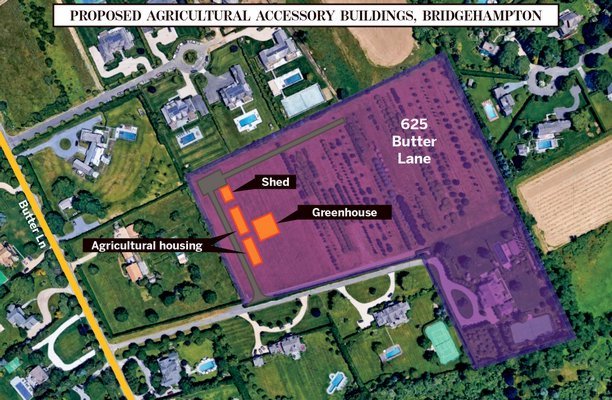 A lack of housing for farm labor on the South Fork is a real problem, said Bridgehampton tree farmer Mark Moskowitz, who operates from 20 acres on Butter Lane with about five other people. The job would be easier, he said, if there were more hands who lived close by.

“All of our labor is not housed, and we often have to find housing for them,” he said.

That’s why a proposal in December by a neighbor down the road, for accessory agricultural labor housing, made his ears perk up.

The owner of an 8-acre agricultural reserve wants to put 3,000 square feet of housing on the property. Attorney John Bennett, who represents the Manhattan hedge fund chief executive, whose name is shielded by a limited liability company, said the housing would help the owner use the property for what it was intended: farming.

“I have been here for a long time, and all of the local tree farms and vegetable farmers have discussed this proposal,” Mr. Moskowitz said to the Southampton Town Zoning Board of Appeals on December 20. “If this comes through and is approved then we will regard it as a precedent that we will all take advantage of.”

Assistant Town Attorney Kathryn Garvin contends it would be his right to do so, and his sentiment was met with support from the ZBA.

The town has allowed this sort of housing at least five times before.

In the 1990s, Mr. Bennett helped Wölffer Estate Stables get agricultural labor housing in Sagaponack, which didn’t meet with much opposition. On 186 acres, Two Trees Stables in Bridgehampton also has such housing.

More notably, former “Today Show” host Matt Lauer got push-back from neighbors in 2013 when he wanted to build additional housing for workers on his 40-acre horse farm in Water Mill. At the time, Phil Keith, a Planning Board member, called the plan a “mini-community.”

“It is a customary agricultural use, which has certain protections in the State of New York and in the town code,” Mr. Bennett said. “We are also trying to utilize an underused agricultural parcel. [Southampton] has set up these agricultural reserves to protect all of this farmland, but they are often not used for agriculture.”

“This is the destruction of our town,” countered Kevin Cox, who lives near the proposed housing. “It is a mind-blowing policy issue. If this goes through, every reserve will plot in housing using this housing loophole in proportion to what these guys are doing.”

Under the town code, housing for agricultural labor must be located on the farm where the laborers work, have access to a paved street, be no less than 200 feet from any side or rear lot line and 150 feet from any front lot line, and meet the minimum state sanitation standards.

Mr. Bennett’s client wants to build two units. The larger one has two bedrooms with en-suite bathrooms plus two half-baths accessed from outside. The smaller of the two units is a one-bedroom with a separate 650-square-foot kitchen attached. Both housing units include a living room, dining room and kitchen open floor plan.

The units are meant to house a maximum of six, which Mr. Moskowitz contends might be overkill for a farm of that size.

Becca Struges, a landscape architect who worked on the proposal, said the inhabitants would focus on farming ornamental trees, flowers and vegetable crops planted in the fields and in the proposed greenhouse. Today, trees intended for market are planted on 4.5 acres.

Neighbors who oppose the plan say Mr. Moskowitz’s eagerness was tongue-in-cheek. Together, they contend that if the proposal gets approved, and farmers do start building year-round housing on their agricultural reserves, it will change the face of Southampton Town for the worse.

Next door, Michelle Green has been slowly moving more of her things into the house her family bought on Butter Lane in 2013. The hope is that when her husband retires from his New York City job, Ms. Green said, the family will move east.

But that will change if the two housing units are approved—about 70 feet from her swimming pool.

“I feel like I want to cry,” Ms. Green said. “My kids don’t understand how they can do this. My girls say they will never use the pool again.

The property was originally owned by the Hampton Day School until it was subdivided in 1996. During that process, Southampton Town Planning Board members issued an agricultural easement, which restricted agricultural buildings to the northwest corner of the 8-acre parcel.

Now, in order to permit agricultural housing there, the ZBA would need to waive the standard of a 200-foot side-yard setback. The Planning Board recommended as much, as long as the ZBA considers limiting the occupancy of the buildings and repositioning the housing behind the other agricultural structures.

Like Mr. Keith’s concern six years ago, Meredith Berkowitz, who lives next to the property, said she thinks such housing will be used by the family and the concierge of the owner, who has a house next door to the agricultural reserve.

None of the neighbors is against the owner putting up the greenhouse and shed that would accompany the housing.

“All the same, it is a permitted use,” Mr. Bennett said of the proposed housing. “It has been in the code since there has been a zoning code, and it is a protected use by a whole host of statutes, case law and ZBA decisions. As per the request of the ZBA, we are looking at ways to maximize the setbacks to be good neighbors.”