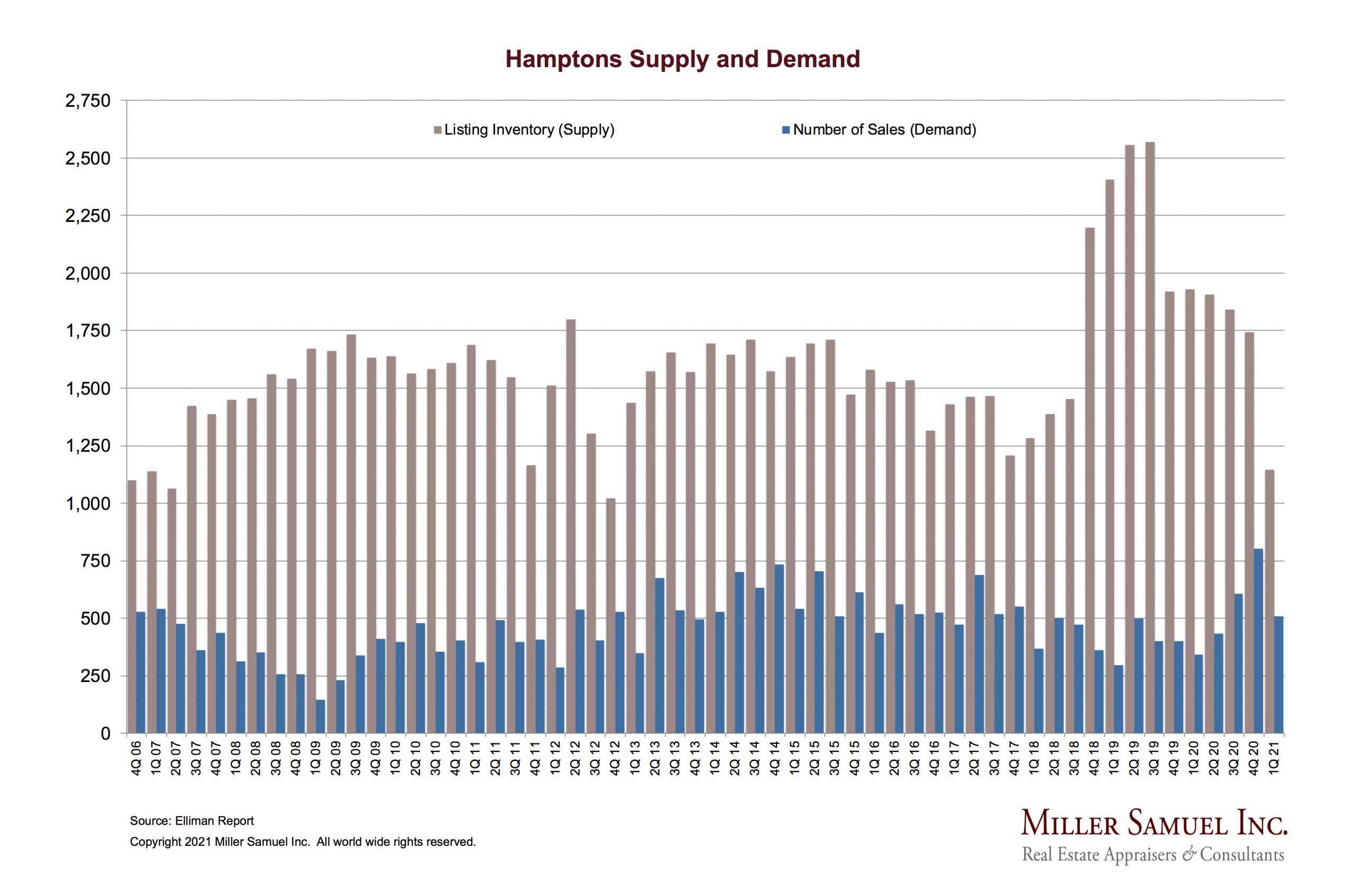 The Hamptons real estate market had the most first-quarter sales since 2015 while inventory hit a low mark, according to Miller Samuel Inc., the real estate appraisal firm that prepares The Elliman Report. COURTESY MILLER SAMUEL 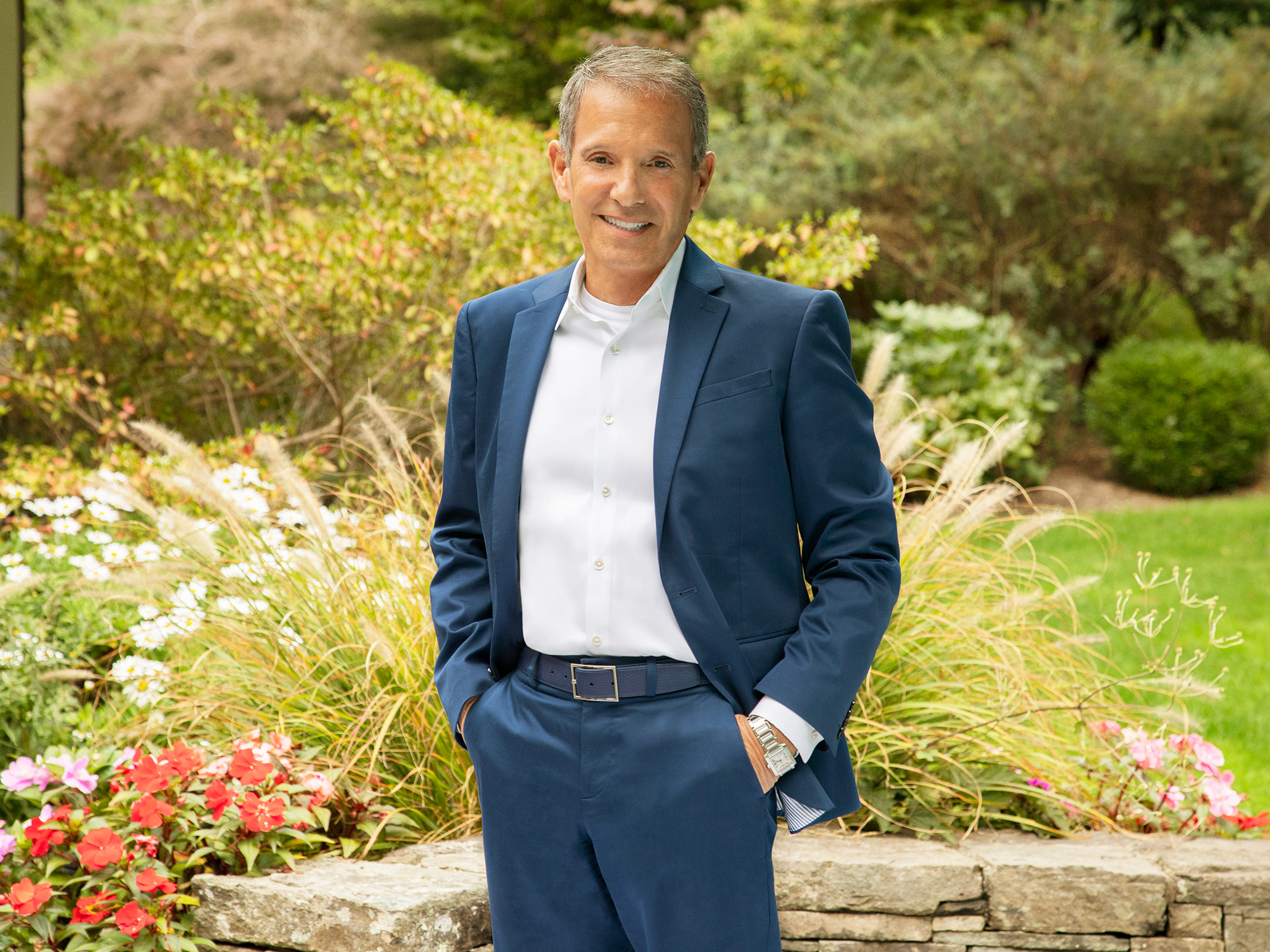 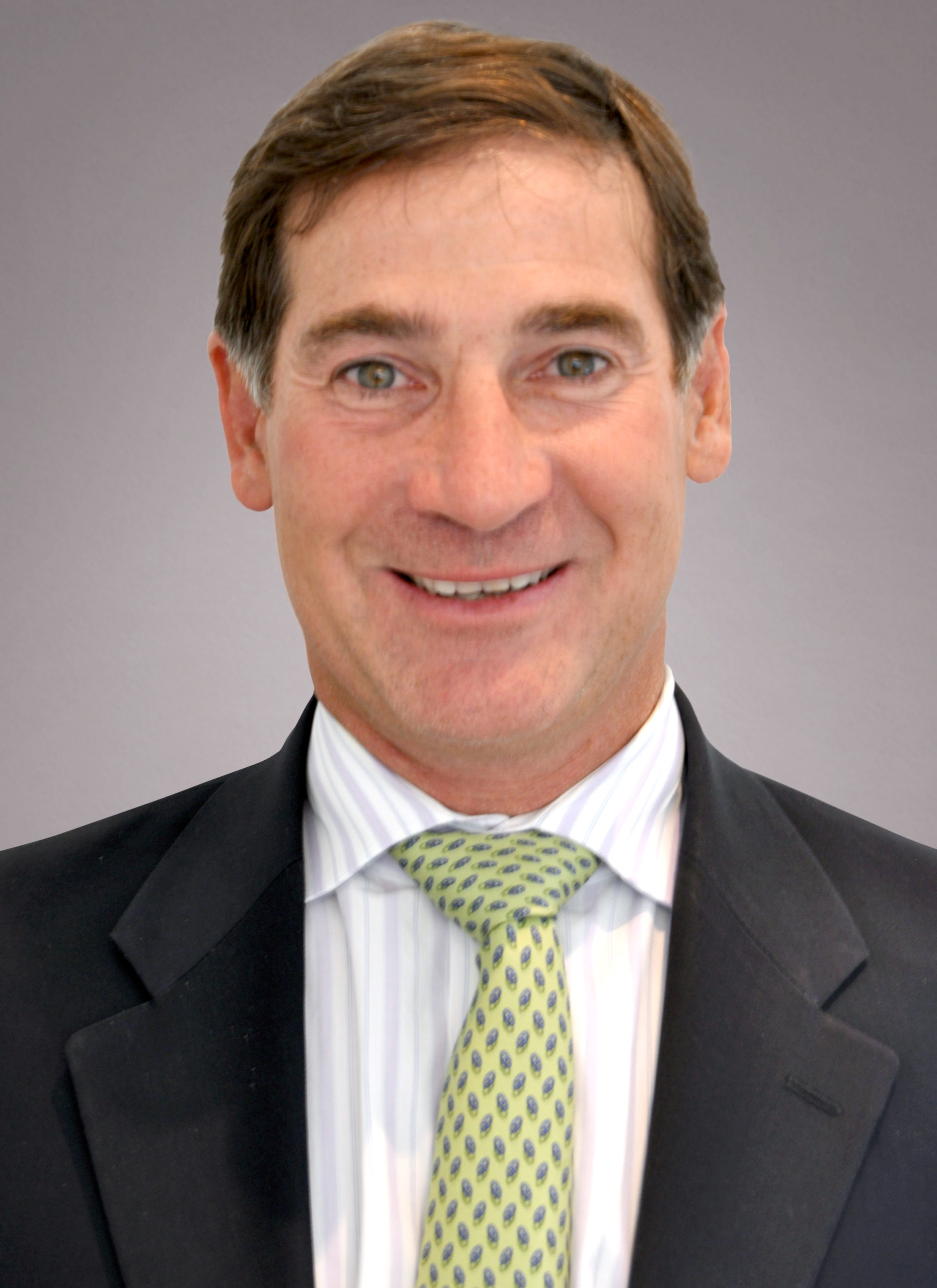 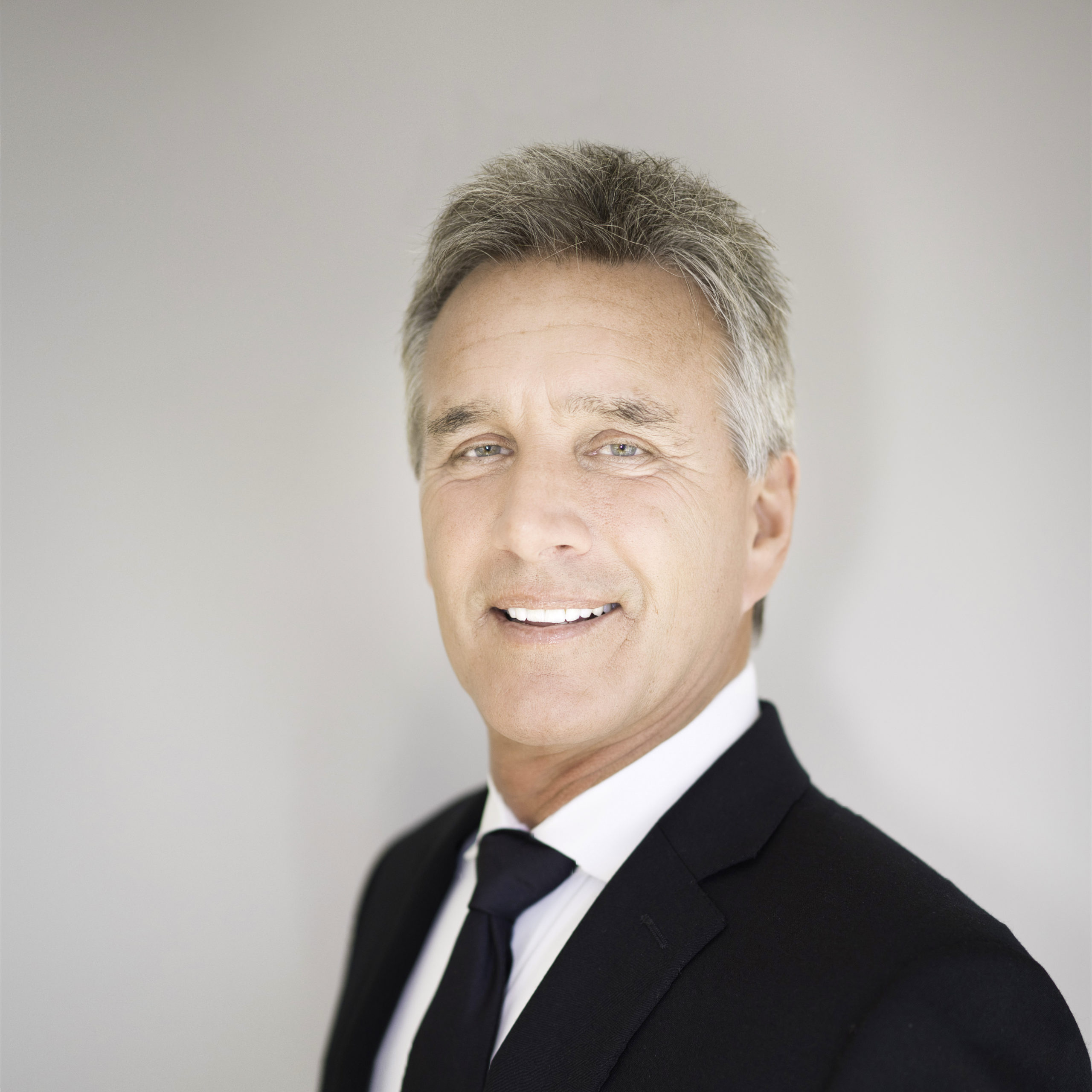 The runaway seller’s market in the Hamptons continued through the first quarter of the year as inventory was squeezed, days on the market shrunk and the number of sales shot up, according to newly released market reports from several East End real estate brokerages. Local real estate executives also reported that it continues to be the case that right-priced homes will quickly amass multiple offers as the surge that began in 2020 amid the pandemic shutdown continues.

The number of sales was up 49 percent compared to the same period last year, and the months of supply — the number of months it would take for all existing inventory to be absorbed — plummeted 60 percent, to 6.8.

According to Miller Samuel Inc., the New York City-based real estate appraisal firm that prepares the Elliman Report, the average days on market for a single-family Hamptons home was 97 in the first quarter — that’s the lowest quarterly average ever recorded since data collection began in 2006. In terms of the number of sales, it was the best first quarter since 2015.

“What’s striking to me about this entire quarter is the continuous strength in sales,” said Todd Bourgard, Douglas Elliman’s senior regional executive manager of sales for the Hamptons. “Of course, you go into every quarter not quite sure what’s going to happen, and we have just seen a continuous uptick in the amount of people coming out here to live on a full-time basis.”

He noted that was around for strong markets in 2006, 2007 and 2015, and he’s never seen a stronger market than the one he sees now. “I’ve never seen more multiple-bid offers on price points from a million to 10 million,” he said. “You know, it’s not uncommon to get a $3.5 million listing and to have a closed bid, final-and-best, with five different buyers.”

While the average days on the market is 97, Mr. Bourgard said part of that is due to the extra time it takes these days to get a survey done or get an inspector to the house. “Those are the things that sometimes keep these things on the market a little longer,” he said. “Generally speaking, if it’s priced properly, we’re wrapping up a deal in two weeks.”

At the high-end of the market, he credits sellers with taking the advice of their real estate agents on pricing homes properly.

“Maybe in the past they put them a little high, and they were willing to wait,” he said. “I think now everybody’s understanding that the buyers are out here. Let’s price it properly, let’s get multiple bids, and let’s move on.”

In addition to price, the winning bid also comes down to the terms of the offer, he added, explaining that favorable terms could be a cash offer, a quick closing and taking a home as-is without an engineer’s report. “These are things that are certainly looked at as an overall package, especially when many of the price points in a sealed bid are very close.”

Different brokerages use different methodologies in their market reports, but they are all finding the same trends.

The Brown Harris Stevens Residential Market Report counted 601 single-family home sales in the first quarter, a 25 percent year-over-year increase, while the dollar volume, which measures how much money changed hands in total, was up 125 percent, to $1.65 billion.

Philip O’Connell, the executive managing director of the Hamptons for Brown Harris Stevens, attributed the spike in total dollar volume to more closings of sales of high-end properties, including 16 sales of $10 million and 44 sales between $5 million and $10 million.

Across the board, in all areas of the South Fork, the market is hot, he reported. “That’s due to the lack of inventory,” he said.

West of the Shinnecock Canal, where price points are traditionally lower, inventories are very, very thin, and prices continue to rise, he added.

Mr. O’Connell said buyers realize prices aren’t going to come down anytime soon and may be even higher tomorrow, so they are acting now while interest rates remain low.

It’s not just people who plan to live in the homes — “end users” — who are competing for a property, he pointed out. “You have builders who are possibly buying the house just to tear down the home and build something, or they’re rehabbing the home to flip it, and then a third participant in the market is the Community Preservation Fund trying to buy up properties that are within their purview for open space.”

Though buyers are competitive, Mr. O’Connell said not every seller can expect multiple bids. “There’s still people who come to market with a price that’s unrealistic,” he said. “Even in an incredibly strong market, those properties will sit for a while.”

Sales for more than $2 million nearly tripled while sales under $500,000 shrank 30 percent, according to the report.

Ernest Cervi, the regional senior vice president for the East End at The Corcoran Group, said he told his agents to use this report as a tool because “if anyone was ever going to sell a house, now is the time, and if a buyer’s ready to purchase, now is also the time.”

There is no way to know when prices will go up or down, he advised. “It’s like trying to call the stock market,” he said. “No one can do that no matter how smart or informed you are.”

One thing that he could say he doesn’t expect is a sell-off once everyone is vaccinated and travel resumes, and he explained why: “The lifestyle for many people out here has changed. Some of them are here full time or almost full time when before they were just seasonal or weekend people.”

That lifestyle change, of staying east more often and only going back to the city for a day or two, will support demand, he said.

Mr. Cervi is also finding that everyone he talks to is having something done to improve their house.

“My architect friends are so busy, over the top. It’s insane,” he said. “And contractors — you try to get a contractor, it’s very difficult. They’re just slammed.”

Anecdotally, there are more houses on the market that need work than houses that are move-in ready, and that includes rentals, he reported.

Renters will ask for work to be done before they move in, and on the very high-end sometimes the renters will pay for their work themselves, he said, such as installing a jacuzzi or high-end electronics.

There is still undeveloped land to be had, he confirmed, pointing to Northwest Woods as one place land can be found. For the most part, it is selling to end-users rather than spec builders, he said.

The Peconic Bay Community Preservation Fund had a record-breaking first quarter in 2021, bringing in ... 28 Apr 2021 by Staff Writer

After two meetings in which the public could weigh in on the draft environmental impact ... by Brendan J. O’Reilly